An Index & Help Thread for Beyond the Original Trilogy…

An Index for just a few of the many numerous discussion threads that have been posted in the ‘Beyond the Original Trilogy’ section of the OriginalTrilogy•com… to try help everyone find topics of interest and information a little more easily.

The Index Categories are…

General ‘Beyond the Original Trilogy’ threads:-

Beyond the Original Trilogy… The Book Of Boba Fett

Tales Of The Jedi

• Tales of the Jedi - a general discussion thread

^ also for character discussion and her appearances in The Clone Wars (both 2008 film & 2008 series), Rebels, Episode IX: The Rise Of Skywalker (voice), The Mandalorian, The Book Of Boba Fett, and Tales Of The Jedi etc.

• If you can only have one of these upcoming series… which would it be, and why? (2021 thread)

• Actors, directors, scriptwriters, etc you would like to see involved in Star Wars (2021 thread)

• Where should Lucasfilm go after Episode IX? (2018 thread)

• After the Sequel Trilogy Concludes… Then What? (2015 thread)

• Would it not be amazing if we got a Darth Vader movie directed by Christopher Nolan? (2020 thread)

• Idea: A Movie or series about the Inquisitors (2021 thread)

• What actor/actress would you like to see in new Star Wars Movies? (2013 thread)

• Opinion: The Biggest Missed Opportunity in Star Wars History… (2012 thread; on future content from the GFFA)

There are also more discussions, suggestions and idea threads for future Star Wars films, tv / streaming series in the ‘A Star Wars Story’ Standalone films’ section, below this one…

• An inclusive universe and a new generation of fans (2016 thread)

• How many ‘Bad’ Star Wars movies could you take before you check out? (2017 thread)

• your thoughts: Did Disney kill Star Wars because it sounds like they did with The Last Jedi, Solo and Resistance (2018 thread)

• What other spinoffs should Disney make? (2016 thread)

• Should the Prequels be more included into the franchise going forward? (2017 thread)

• After the Sequel Trilogy Concludes… Then What? (2015 thread)

The Rise Of Skywalker

• TROS Spoiler thread
• TROS Non-Spoiler thread
• TROS Official Review and Opinions Thread — * SPOILERS *
• The Rise of Skywalker box office results: predictions and expectations
• Name Something You Unreservedly Love About TROS (SPOILERS)
• The Rise Of Skywalker Crackpot Theories Thread
• What should we see in IX?
• Star Wars Episode IX (was) to be directed by Colin Trevorrow (now directed by JJ Abrams)
• Your thoughts on the Episode IX title
• Episode IX Opening Crawl
• John Williams says IX will be his last
• Does Kylo really deserve to be redeemed? Did he deserve to be Reys love interest?
• Rumor: COUNTDOWN to The Rise of Skywalker EXTENDED CUT
• Rise of Skywalker - Abrams’ Vision or Executive Meddling?

• What do you think of the Sequel Trilogy? a general discussion thread (2021 thread)

• Kathleen Kennedy showing off her chops? Persuading JJ to do VII… (2013 thread)

• Would you want to see Anakin or Obi Wan in the new trilogy, portrayed by their PT actors? (2015 thread)

• Other than Jar Jar and midichlorians, what don’t you want in episode 7? (2014 thread)

• Drew Struzan? No thanks (2015 thread, re the posters for the Sequel Trilogy)

• How could The Force Awakens have been more original? (2016 thread)

• What do you want to happen in the the rest of the Sequel Trilogy? (2016 thread)

• The Sequel Trilogy we wanted… (2017 thread; or what some people wanted…)

• Most Disappointing Aspect of Sequel Trilogy? Most Satisfying? (2018 thread)

• An inclusive universe and a new generation of fans (2016 thread)

• Can Someone Explain the Map to Luke Skywalker? (2017 thread)

• Why Doesn’t the Resistance have Tie Fighters in The Force Awakens? (2017 thread)

• What’s your take on Emperor Palpatine being brought back for The Rise of Skywalker? (2020 thread)

• In defense of Rey Palpatine in The Rise of Skywalker, and why I do not think it undermines her arc in The Last Jedi (2021)

• Should the sequel trilogy be “reworked” to make them better movies? (2022 thread; Sequel Special Editions…?)

• Killing off the original heroes (2022 thread; re did it upset anyone that they were killed off in the ST?)

• If George Lucas Had Made The Sequel Trilogy… (2016 thread; re possible story & characters etc)

• George Lucas’ comments re his Sequel Trilogy (2018 thread; re GL’s ST ‘was going to get into the microbiotic world’ quote)

• “The Ride of a Lifetime" - book by Bob Iger. Lucas mention (2019 thread; GL felt ‘betrayed’ when his ST ideas were rejected)

• Would Lucasfilm have made new SW films with or without Disney? (2018 thread)

• your thoughts: Did Disney kill star wars because it sounds like they did with the last jedi solo and resistance. (2018 thread)

• Episode IX: The Rise Of Skywalker - Discussion * SPOILER THREAD * (already listed - though also here given context of the sub)

Attack Of The Clones

• What is wrong with… Attack of the Clones? - a general discussion thread (2016 thread)
• Ep II has the best story of the Prequels. Discuss (2015 thread)
• AOTC Trivia
• Worst dialogue from AOTC!!!
• I was watching AOTC again in almost 5 years… ugh!
• Should Palpatine have been the one to say “To be angry is to be human”? (2022 thread)
• Questions about AOTC
• Someone please explain why there is a 50’s diner in the Star Wars universe…
• The love scenes in AOTC
• IMAX cut of AOTC
• How Many Versions are there of the AOTC?
• kershner directing AOTC
• Speculation about the 4K Future of AOTC and ROTS (2019 thread)

Revenge Of The Sith

• What do you think of the Prequel Trilogy? a general discussion thread (2006 thread)

• What do you think of The Prequel Trilogy? A general discussion (2022 thread)

• Star Wars prequels were mapped out in 1981, only nothing like the way they turned out

• Phil Tippett on the Special Editions: “They’re shit” + £2b for George to direct the Prequels (PepsiCo’s 1996 deal with George)

• Did G. Lucas ever intend to portray the Jedi as a flawed institution in the Prequels? Or was it added later in the EU? (2021)

• Understanding the Prequels (and the entire SW story) (2014 thread)

• Interesting Hypothesis of the Prequels Story from the Mid 90’s

• What did we all expect from the Prequel Trilogy? (2004 thread)

• How did you imagine The Star Wars Prequels before they came out? (2011 thread)

• What is everyone’s view on the “prophecy?”

• The Jedi of the PT

• Why do they go into exile? (re Yoda and Kenobi at the end of Episode III)

• So, yesterday there was this Star Wars marathon - Prequel Rankings… (2014 thread)

• Are The Prequels That Bad?

• When did you give up with the Prequels, TPM, AOTC, or ROTS?

• Are the Prequels Even Worth Watching Once?

• Is there anything that you actually like about the prequels?

• The Merits of the Prequel Trilogy and the “Saga”

• When Did The Star Wars Prequels Become Cool?

• The Prequel Trilogy showdown - which versions of the PT to watch?

• Design failures (and successes) of the Prequel Trilogy

• Did the prequels have boring visuals?

• Looks like the prequels are not aging well (a 2009 thread)

• Should the Prequels be more included into the franchise going forward?

• Do you think Disney will remake the prequels?

• The Prequel Trilogy Films vs. The Novels

• The PT’s influence on today’s movies

• The most pathetic drivel about the prequels i have ever read (2010 thread; a type of pre-cursor to Ring Theory)

• Speculation about the 4K Future of AOTC and ROTS (2019 thread)

• Help: looking for… ideas on fixing Anakin’s fall to the darkside (2019 thread)

• Anakin Skywalker’s turn to the dark side; your alternatives? (2021 thread)

Midichlorians (plus the retconning of them to ‘having always been there’ in the GFFA, & their invention for the Prequels)…

• Proof of Lucas’ revisionism in Rinzler’s making-of book? (George retcons history to try and make midichlorians a thing in 1977)

• Midichlorians versus Life Day: which is worse?

• Other than Jar Jar and midichlorians, what don’t you want in episode 7?

• Who are the Whills?

• Midichlorians Are Not The Force (2021 thread)

• George Lucas’ comments re his Sequel Trilogy (supposedly re the macrobiotic world and midichlorians, with more retcons)

• George Lucas’s Sequel Trilogy (2020 thread; with midichlorians and the retcons)

• Connection between the Telomere tail of human DNA and midi-chlorians?

• Harrison Ford’s Feelings about the Holiday Special - a 2006 thread

• Wikipedia page for the Radio Dramas

Ewok feature films - ‘Caravan Of Courage’ - aka ‘The Ewok Adventure’, & ‘Battle For Endor’

• Droids preservation ideas (2009 - though a Preservation thread, does contain lots of info)

• Droids and Ewoks, anybody? (2011 - though a Preservation thread, does contain lots of info)

• Droids and Ewoks, anybody? (2011 - though a Preservation thread, does contain lots of info)

• How many of you watch The Clone Wars series regularly and what do you think of it? (2011) - review thread

• “Future Theatrical and DVD Releases” What do we think they will be? (2006 thread)

• New Star Wars films to be produced and written by David Benioff and D.B. Weiss (Cancelled) (as of October 2019)

General ‘Beyond the Original Trilogy’ threads…

The ‘Beyond the OT’ Trailers/Promos Thread (YouTube/Vimeo, etc. finds) (2020 thread - by ZkinandBonez)

The Random YouTube, Vimeo etc. video finds thread for ‘Beyond the Original Trilogy’ (2020 thread - by ZkinandBonez)

• Lego Star Wars: Mini Movies (animated series of shorts from across the GFFA)

• Digital OT owners switched to Disney+ versions without consent? (could also happen to other releases on stream services?)

A few basic info posts on some of the various lesser-known Star Wars content available on Disney+:- 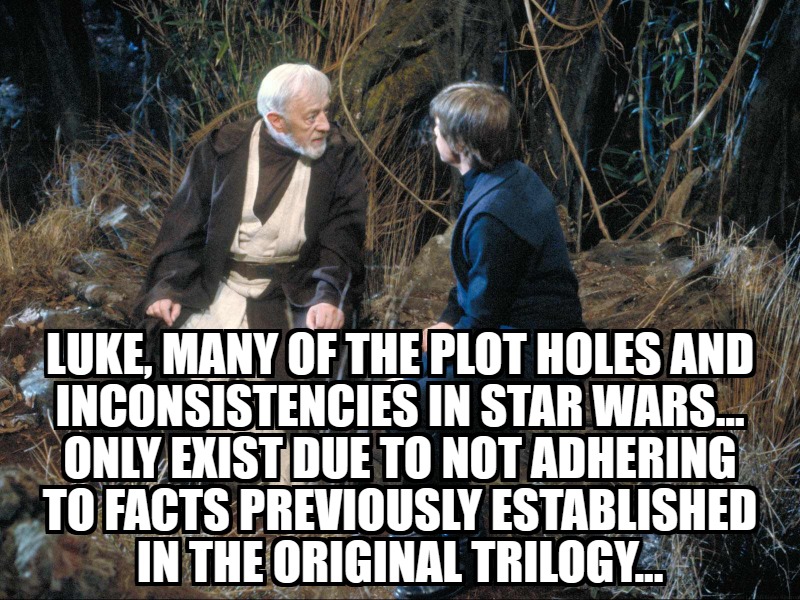 This category can be found in the…

Obviously, everyone’s mileage may vary on what is considered a discrepancy etc - or not - and just how much of an issue each one is…

If you have any suggestions for more relevant threads to be added to the linked category above, please let us know or post them in that linked thread above. Thank you.

Links to the Welcome to the OriginalTrilogy.com; Introduce yourself in here + useful info within, plus About, and Help sections.

A link to the ‘How do I do this?’ on the OriginalTrilogy.com - some info & replies to members’ FAQs thread, in General Assistance.

Thank you to the admin & moderators for the new indexes, it helps us find certain series and topics much easier and quicker 😃

Thanks for reminding us that Detours existed.