I will say, for those worrying the titular Mando would just be a Boba Fest clone, they have done well to individualize him, in particular his attachment to Mandalorian culture. If Boba Felt does indeed show up next season, as many are speculating, I think there differences will become all the more apparent. Could actually work well as an interesting storyline.

Has there been any news, a release date, or even confirmation, that season one of The Mandalorian will be released on blu-ray?

I saw this brilliant piece of art for season one of The Mandalorian earlier - by James Raiz (https://twitter.com/boxofficeartist):- 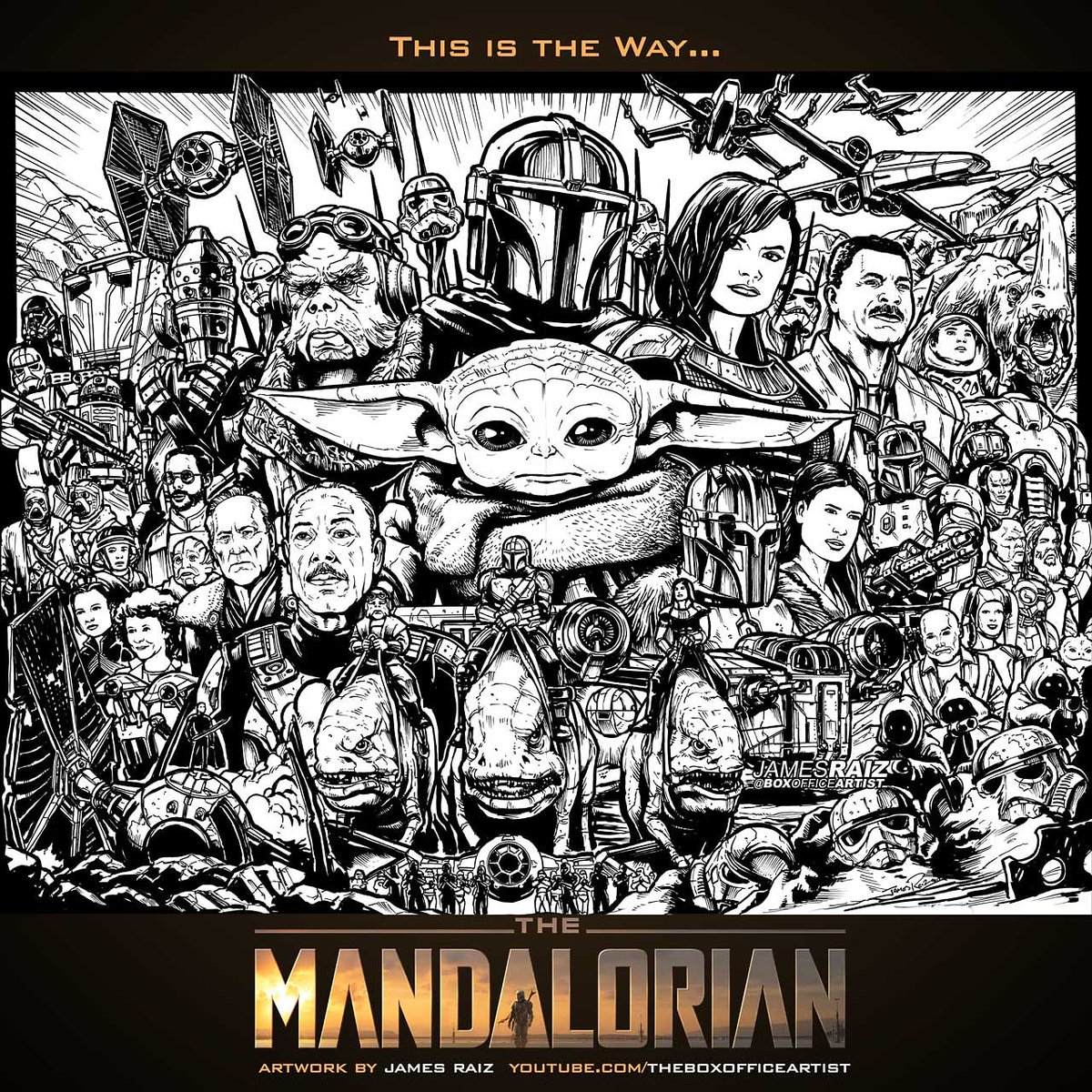 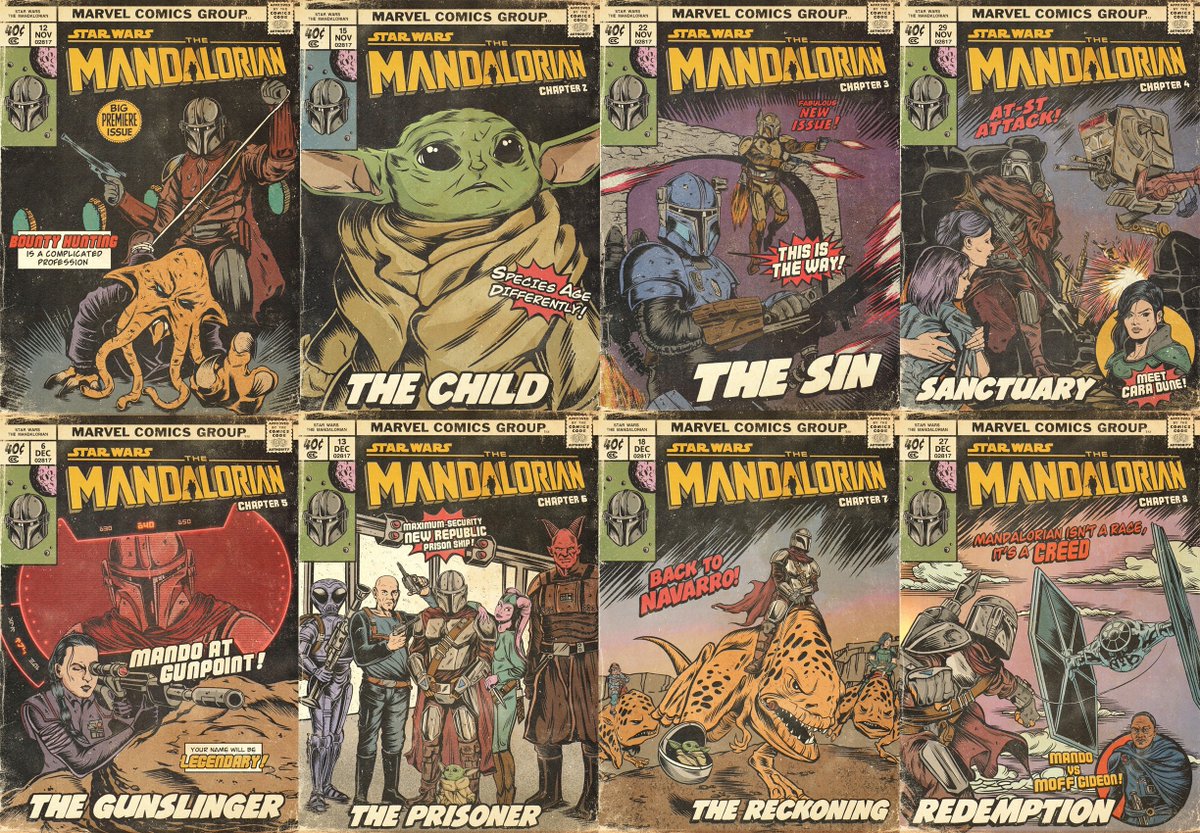 by dvglzv - https://www.instagram.com/dvglzv (has some more Star Wars content on there & Batman too)

by dvglzv - https://www.instagram.com/dvglzv (has some more Star Wars content on there & Batman too)

Just FYI, Darth Muffy made a thread dedicated to these and similar retro covers by other artists; https://originaltrilogy.com/topic/The-Mandalorian-Comic-Covers-SPOILERS-WITHIN/id/71304

By the way - I love your documentary threads on here, ZkinandBonez; some really great content in there and easily accessible too 😃

I hope we soon get some docs, features and BTS content for The Mandalorian as well.

By the way - I love your documentary threads on here, ZkinandBonez; some really great content in there and easily accessible too 😃

I hope we soon get some docs, features and BTS content for The Mandalorian as well.

Thanks. I just made a similar thread for stuff like The Mandalorian, ST, PT, etc.

Also, I remember seeing a sizzle-reel video for The Mandalorian on one of the many videos taken by the audience at the SWC panel and I’m a bit surprised that it hasn’t been released officially yet.

Ok, I’m ready to buy this thing. Any word on a physical release?

I’d buy a physical release of the series. I seldom buy discs these days because I’ve yet to be unable to stream anything I like. However, for the films I like enough to make full-film audio rips into MP3s for long drives or flights, I need a physical release.

There are lots of people who think Disney won’t ever release these because streaming subscriptions would go down. I could easily be wrong on this, but I doubt they would lose money. There are countless fans who have every release and box set of these films that have been offered through the years. There may also be plenty of people who either can’t or won’t buy all the streaming services offered but who may be more than happy to purchase a DVD set.

Streaming has become so mainstream and prioritized that for many people, the option to watch, much less own, physical discs isn’t even really an option to them. The idea that there’s a big enough number of people who would buy physical releases of the show instead of streaming them doesn’t seem realistic to me, I agree. They wouldn’t lose money if they issued this series on blu-ray or 4K UHD.

For better or worse (largely worse if you care about things like picture quality) the mainstream audience considers streaming to be the primary home video format now, and prefer to watch their shows via the internet. The discs wouldn’t be competition with that. They’d be a very cool secondary income stream for the property though, and they should exploit that.

Yeah I suspect it will go the way of Stranger Things. Like that, this is a flagship series for their platform that has a massively broad appeal. Like ST, I see The Mandalorian getting a disc release eventually, but it might be a while yet.

Because most Star Wars fans are obsessive & would love to add it to their collections.
Therefore Big D would make lotsa money & get an even bigger return on their investments.

The idea about it damaging their streaming revenue is silly, & D+ knows this.

Sure, I can stream it just about anywhere, but I’d love a 4k presentation with no compression artifacts.

Megacorporations don’t want you to own movies or shows, only rent them in perpetuity. It’s what they’ve always wanted, and thanks to streaming and the complacency of the sheep, they can get away with it now.

A lot of people don’t pick up on what’s happening. Not to sound like some conspiracy theorist but Disney Plus has been a success and it’s going down in history. Give it a couple decades and movies theaters will be on the decline, if not at the point of obscurity.