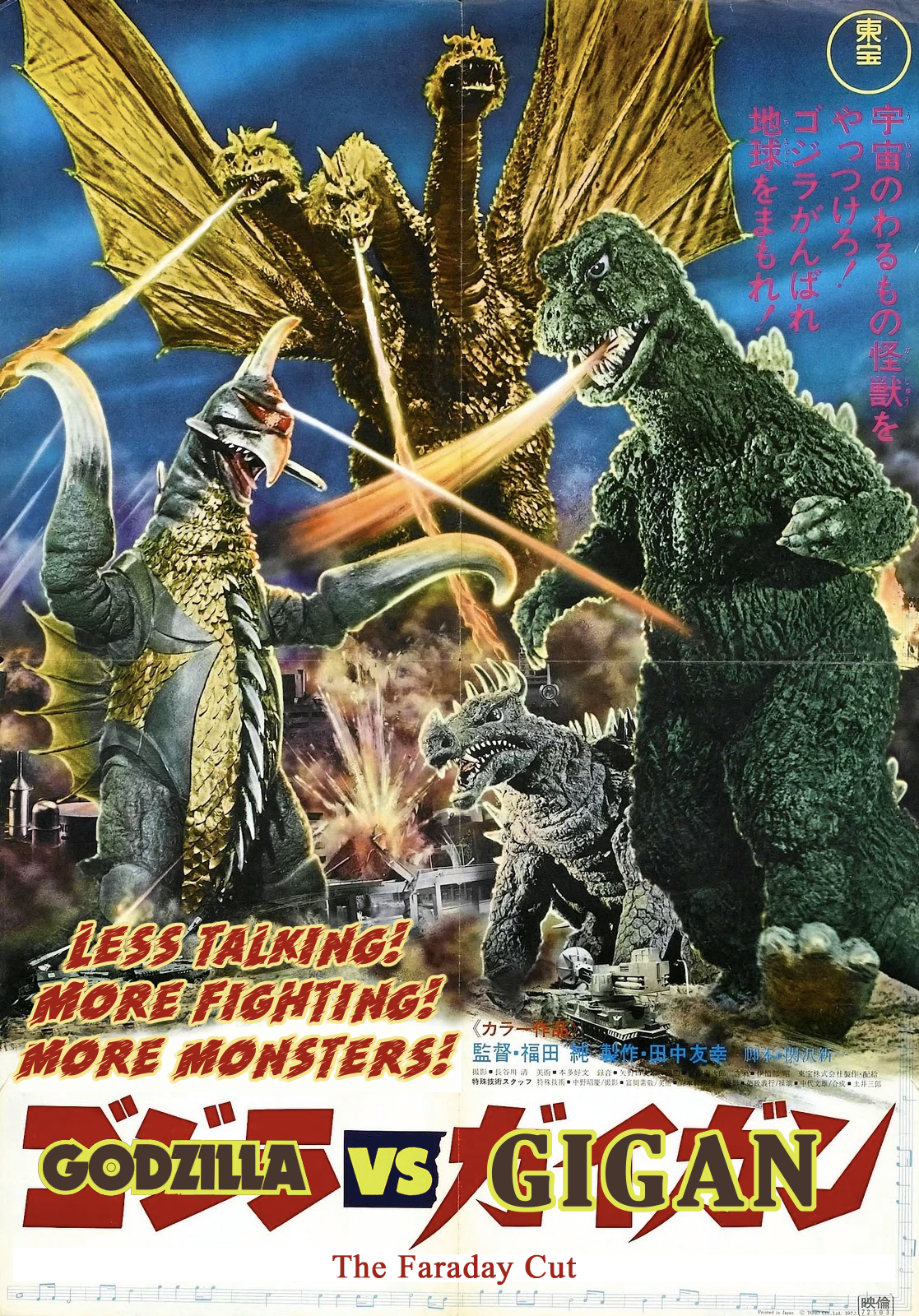 Synopsis: When a cartoonist gets a job designing monsters for a new Godzilla theme park, he realises his employers aren’t what they seem - and soon, he finds himself joining forces with Godzilla and Anguirus to save the Earth from the terrifying Gigan and King Ghidorah…

This is the second of my Godzilla movie edits for my now six-year-old son. As with my previous edit, I’ve aimed to give more time to the monsters by cutting the filler, as well as tighten the plot and remove things that don’t fly in kids’ movies any more - a difficult feat this time around, with so many characters smoking throughout the movie. The seventies were a different time.

The theatrical cut of Godzilla Versus Gigan is presented as a darker movie than Godzilla Versus Megalon, which was an interesting decision, because the raw footage they have is clearly just as offbeat. The big thing I wish I could change is the music. They really love the Godzilla theme in this one, and it’s the most harrowing dirge they could make it. Which is a shame, because the footage it’s paired with is a lot of goofy fun - soccer kicking boulders, Godzilla dancing around, Anguirus hanging from Ghidorah’s tail by his teeth, all sorts of silliness. Unfortunately, even the Criterion Collection only has the audio in stereo, and to my knowledge there’s no 5.1 source available at all, so I couldn’t remove the music and replace it with something more fitting unless I remove the audio completely and manually replace every single sound effect.

Like its predecessor, I’ve cut the movie down to a lean hour of campy seventies family-friendly fun, keeping intact the excitement and danger of the humans’ story while toning down the parts that haven’t aged well.

Thanks! I’m re-exporting the file (I accidentally turned an audio layer off before exporting and didn’t realise until two music cues were missing when I watched it back), so I’ll upload it to my folder of available fanedits once that’s done.

Thanks! I’m re-exporting the file (I accidentally turned an audio layer off before exporting and didn’t realise until two music cues were missing when I watched it back), so I’ll upload it to my folder of available fanedits once that’s done.

I’ve actually decided to trim a handful of scenes a little more, in response to my son’s criticism that “they talk for too long” at some points. So, I’ll finish V2 as soon as I can, and I’ll upload that.

Thanks! I don’t remember the name of the font off the top of my head, but I used it on my Godzilla Vs Megalon edit poster and thought it worked so well that I’m using it for all my future Godzilla edits.