Now that there is a dedicated ‘Original Trilogy Discussion’ forum on the site, and the General Star Wars Random Thoughts thread is in the ‘The Expanded Universe & General Star Wars Discussion’ section, some of us on here thought it may be a neat idea to have new ‘General Random Thoughts’ threads focusing on each of the three Original Trilogy films.

Plus another thread for ‘General Random Original Trilogy Thoughts’.

In other words… a few threads for some light discussion of these much loved, iconic and ground-breaking films.

The Empire Strikes Back - a General Random Thoughts thread

Return Of The Jedi - a General Random Thoughts thread

One of the many standout features across the whole Trilogy for me is James Earl Jones’ seminal delivery of dialogue for the character of Darth Vader. He added such power, authoritative wrath and wondrous menace… to the already striking visual aesthetic of both the mask and suit, as well as the colossal prowess and performance by Dave Prowse under the helmet.

All films of this nature need a strong and memorable villain… and yet James Earl Jones’ voice-work for Vader lifted the character to another level of fear-inducing badassery; which is probably not an easy thing to achieve in movies where the ‘bad guys’ usually tend to be played as stereotypical caricatures or are somewhat ‘hammed up’ by the actors playing them.

“I said to myself, ‘He’s lying. I wonder how they are going to play that lie out?’” the actor says.

and an article on him meeting Carrie Fisher for the first time in 2014 - for filming an episode of ‘The Big Bang Theory’:- 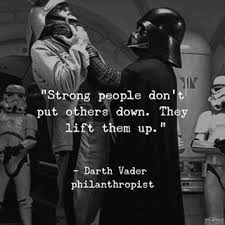 Also, a true story… Harrison Ford and James Earl Jones once teamed up with each other to defeat the Nazis - impressive, most impressive…

James Earl Jones is the man.

For me it was the ships and vehicles, especially growing up with the toys and figures.

The beaten-up ‘second-hand’ look of the rag-tag Rebel Fleet gave the story some extra depth and quality, a sense of the ‘hopeless cause’, that they were scratching around for anything and everything to us vs the well resourced and ‘new shiny’ Empire - with their seemingly limitless supply of ships.

And it was great, and something different, as a kid seeing that on-screen and then running off and playing with those aged / battle-damaged toys etc.

Has anyone ever been removed from the end credits? I remember reading something, but can’t find anything now. Am I just misremembering… again?

Has anyone ever been removed from the end credits? I remember reading something, but can’t find anything now. Am I just misremembering… again?