The Empire Strikes Back turns 40 years old this week…

and although the original theatrical version of the film hasn’t had an official dedicated release in 25 years, it is probably worth still marking the occasion with its own thread - especially as the offical Star Wars social media plaforms seem to be issuing out several pieces for it’s 40th anniversary - probably in the hope people think it is the same film that is available to buy now as it was 25 years ago - and more… 😉

Empire at 40: George Lucas on making ‘something that had never been done before’ again

Empire at 40: Why we love The Empire Strikes Back (StarWars official site writers talk about thier love of the film)

Empire at 40: Snow Walkers, Stop-motion, and dumpster lids: An Oral History of The Battle Of Hoth

History in objects: Dispatches from Empire Strikes Back

Star Wars: The Empire Strikes Back Time Capsule - ZkinandBonez’s post on the new short video about the production of ESB…

There is another: SW actors, creators and fans on Empire’s enduring legacy at 40th - article at SyFy

‘The Empire Strikes Back’ at 40: How the sequel launched ‘Star Wars’ into the future - article at CNN

The Legacy of Star Wars: The Empire Strikes Back 40 Years Later - article at Flickering Myth

‘I am your father’: The Empire Strikes Back writer looks back on iconic twist - article at EW

The Empire Strikes Back at 40: did the Star Wars saga peak too early? - article at The Guardian

Obviously, StarWars.com is also selling a load of Empire Strikes Back merchandise on the back of it’s 40th anniversary - seemingly everything but the original film itself, of course…

Just for fun and ICYMI…

https://twitter.com/ILMVFX/status/1263879828937207808
Quote: “ILMVFX @ILMVFX
Thursday, May 28th at 4PM PDT join us for an unforgettable live stream on http://YouTube.com/ILMVFX in celebration of the 40th anniversary of ‘The Empire Strikes Back’. Announcing our first guest the legendary Joe Johnston.”

As with STAR WARS’ 40th anniversary celebrations, THE EMPIRE STRIKES BACK is shamefully unavailable (officially) in its original release form.

I see nothing here to celebrate.

As with STAR WARS’ 40th anniversary celebrations, THE EMPIRE STRIKES BACK is shamefully unavailable (officially) in its original release form.

I see nothing here to celebrate.

I here ya! It’s a strange world where my favourite movie of all time has come out in 4K with new artwork and I totally do not care. I guess Lucas has saved me a ton of money if nothing else…

‘Empire at 40 | The stories begind 5 amazing matte paintings from The Empire Strikes Back’:-

were also included in the ‘40th Anniversary section’ for Empire - despite being made in 2012 - though great videos themselves.

There is also a 58 image gallery on Ralph McQuarrie’s art for Empire at https://www.starwars.com/empire-40th

‘Defining Moments: I know’ article - https://www.lucasfilm.com/news/defining-moments-i-know - though no mention of how George Lucas hated it - and Empire’s director Irvin Kershner apparently having to fight to keep it in the film.

That’s apparently from one of Irvin Kershner’s last interviews before his death.

“George saw the first cut and said, “Wait a minute, wait a minute. That’s not the line in the script.” I said ““I love you, too’ was not Han Solo.” Han Solo was a rebel. George felt that the audience would laugh. And I said, that’s wonderful, he is probably going to his death for all they know. We sat in the room and he thought about it. He then asked me, “Did you shoot the line in the script?” I said yes. So we agreed that we would do two preview screenings once the film was cut and set to music with the line in and then with the line out. At the first preview in San Francisco, the house broke up after Han Solo said I know. When the film was over, people came up and said that is the most wonderful line and it worked. So George decided not to have the second screening.”

Apparently Lucas was worried the audience would laugh in a way that took them out of the movie. Fortunately people understood that it fit Ford’s character well and worked in the dramatic circumstances - so they laughed but thought it was excellent.

One thing that’s to Lucas’ credit IMO is that he’s always been very worried about what sort of things might break audience immersion.

ATMachine said:
One thing that’s to Lucas’ credit IMO is that he’s always been very worried about what sort of things might break audience immersion.

Well this story is already well-known for a long time. It shows just how Lucas controlled every little detail. But fortunately he was willing to compromise and convince himself by test screening. If that was Lucas with PT-era mentality, we would probably be deprived of this great line that Ford came up with. 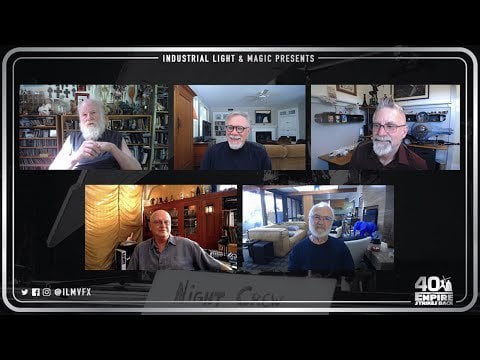 I don’t have time to watch The whole thing now, but just the intro was amazing. There were behind the scenes clips I’ve never seen before. Can’t wait to sit down and watch it all the way thru!