What the title says, whats your favorite book? Or even Trilogy since there are so many of them. Currently reading through The Thrawn Trilogy for the first time (not sure how ive never read it before, read all of Zahn's other SW stuff). Its really good, but The Han Solo Trilogy is still my all time favorite. The single book I, Jedi is really good as well.

the Jedi Apprentice series. It fleshes out Qui-Gon and helps me remember why, even though he didn't do too much in The Phantom Menace, he was a likable character. I'd venture a lot of them are written better than the prequels themselves, despite the adolescent nature of the series.

So that's why I have such fond memories of TPM.  I still have every Jedi Apprentice book buried in the basement somewhere.

Plus, it's completely irreconcilable with the prequels, which is a good thing in my eyes.

Jedi Apprentice is fantastic. Shatterpoint is a nice departure from the general prequel crap.

The Han Solo Adventures are still the best to me. Closest to the escapist spirit of the films.

The Thrawn trilogy is a close second. Still great after all these years. I, Jedi is pretty good from what I remember. You can't go wrong with most of the Bantams. From the NJO on I just gave up. I've read numerous books since then and have officially just given up.

Other notables I can think of: Han Solo trilogy, Shadows of the Empire, X-Wing series, Courtship of Princess Leia, Jedi Academy Trilogy, Hand of Thrawn Duology, and some of the "Tales from" collections.

I wasn't a big fan of Shadows of the Empire or the Hand of Thrawn books.  Not really sure why, exactly.

I just got a kindle and have 300ish star wars books on it. Working on reading stuff I never got around to reading.

I agree somewhat about the NJO, i read the first 10ish or so of them and most of them were pretty good, kinda just quit and later on when I heard about how it ended, i wasnt really thrilled with where they took it.

After i finish Thrawn im gonna work on Han Solo Andventures, always wanted to read them after reading the Han Solo Trilogy. It was pretty cool how that one referenced the adventures, it kinda skips over that time period for Han and mentions some stuff from them.

Anyone ever read the Corellian Trilogy? That was an OK one from what I remember of it. All the stuff from the 90s/early 00s was all pretty decent from the stuff I have read that came out then.

Another one I never read was the Rogue Squad stuff, I think that was like 6 plus books, add that to the list I need to read.

On a side note and slightly off topic, favorite character from the EU books? Id go with Talon Karrde personally.

I really like the Han Solo Adventures, as well as the Galaxy of Fear books. I also am barely reading the Thrawn trilogy for the first time. Still in the first book it's...alright I'm hoping it gets better.

The making of star wars, based on the unpublished work of Charlie Lippincott.

Rinzler edited it for publication.  He may have authored the book but the raw interviews and accounts of the making from 1976 on was done by Charlie.

One of the unsung heroes of star wars success, he was there in 1976 at the world science fiction convention to promote the film.

Its like Lucas taking credit for the authorship of the star wars trilogy.  When other people wrote them.

Jedi Apprentice was a great series. I had five volumes, and someone stole them. Blasted thieving people...

Shatterpoint is fantastic and far above most prequel-related stuff. The Thrawn Trilogy really captured the classic Star Wars feeling too, in my humble opinion.

I liked th first two Republic Commando volumes. Haven't bothered to read the rest, but it was an interesting diversion from Jedi, the Force and such.

Han Solo and the Lost Legacy.

Favorite EU character is Mara Jade by a longshot. 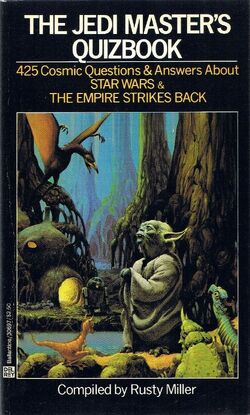 Haha, I have that book, too!

I'd have to go with the Thrawn trilogy.

It's a toss-up between The Making of Star Wars and The Secret History of Star Wars... And maybe Skywalking. OH GOD DON'T MAKE ME PICK JUST ONE!

Kitbashed
Essays, videos and thoughts on the inspiration behind Star Wars. My favorite(s) are The Han Solo Adventures by Brian Daley. They're well written, very interesting, have that depth of character & atmosphere, that attention to scene detail that Daley was so good at - and - they're free of the burden of all the stuff that is just so fucking tired to me about Star Wars, i.e. The Empire, The Sith, Vader, R2, 3PO, etc.  There is just so much more that can be done with the vast, dark, unknown universe we were introduced to in 1977.  Brian Daley did it with these three novels.

The only other book I've read is Splinter Of The Mind's Eye.  I enjoyed it also.  Since it was commissioned by Lucas as the sequel to Star Wars, it has some familiar characters and themes, but it's also not bogged down by Lucas' tampering or universe shrinking.

I love the Thrawn trilogy, it's definitely my favourite, but Brian Daley's Han Solo novels are a close second.  It's actually quite refreshing to have stories set in a different part of the galaxy with different concerns, run by an equally oppressive but differently motivated group (the Corporate Sector Authority).  Daley really captures Solo's character, and he's pretty much unmatched in that regard.

Very interesting title for that "Splinter."  What is the phrase's significance in the book?

This is the last of my Star Wars books.  I donated about all of the EU stuff to my local library.  The stack of pages on the top shelf are copies of all the scripts I found on the net, plus my Indy comics.

This is the last of my Star Wars books.  I donated about all of the EU stuff to my local library.  The stack of pages on the top shelf are copies of all the scripts I found on the net, plus my Indy comics.

I about died and went to heaven after seeing this picture!!!

The poster also known as, "Tosche-Station"

"This is spurious business!" -  'Anonymous'

"Don't freakin' dissemble!" - Jack Nicholson as the Joker if he were in the movie 'Anger Management'

I enjoy flicking through The Essential Guide to Characters - released in the mid '90s, it's refreshingly free from prequel references (see C3PO's back story, for example).

When I was a kid I had this Star Wars activity book which I'd like to see again. I can only remember a couple of pages from the book: there was "how to make a Darth Vader dime bank" (being a British kid I had no idea what a "dime" was), and a Vader afterimage-type optical illusion (stare at the centre of this image, then at a blank wall, and Vader will appear before you). Did anyone else have this?

I've seen the Luke, Artoo and Chewie activity books but not the Vader one. I'd sure like to though.