“Presenting all-new, creative takes on the galaxy far, far away, Star Wars: Visions will be a series of animated short films celebrating Star Wars through the lens of the world’s best anime creators. The anthology collection will bring 10 fantastic visions from several of the leading Japanese anime studios, offering a fresh and diverse cultural perspective to Star Wars.”

^ from the ‘Future Lucasfilm Projects Revealed’ article on the official Star Wars website.

I am really hoping they push the boundaries for this, some high quality and sweeping animation, and differing styles to what we have seen before in the animated Star Wars series we’ve seen so far.

Maybe something along the lines of the quality fan videos like Daz Tibbles animation, the TIE Fighter - short film, Malec’s The Mandalorian as anime, or even better. 😃

This is simply ‘a general discussion thread’ for Star Wars: Visions, if anyone wants to create threads for the individual stories please do.

This sounds very much like the Animatrix. Could be really interesting if they don’t give too many restrictions and allow the animators to get a little weird and crazy. I obviously don’t expect them to go as far as the Animatrix did (I’m assuming this is mostly marketed for kids?), but it’s still a great opportunity for SW to get a little experimental.

I hope we get a teaser soon.

Coming Oct 12th, an original novel inspired by one of those animated tales. A #StarWars book quite unlike any before it.

Does that mean we should expect Visions to be released prior to October 12?

Check out the full details below:

Lucasfilm’s Star Wars: Visions is an upcoming anthology of animated shorts celebrating Star Wars through the lens of the world’s best anime creators and storytellers. Tune in for a sneak peek that will leave you excited for this all-new vision of the galaxy far, far away!’

www.starwars.com/news/anime-expo-lite-star-wars-visions (an article from the 3rd July, 2021)

Nice that it’s taking place at an actual anime event. I’m excited to see what this looks like.

Wow, Jacqui Lopez’s name is one letter off from Jacqui Louez, who worked on RotS! At lightspeed, I payed for an entry fee for Anime Expo last-minute which meant I got to see the Star Wars Visions panel. Lots of exciting stuff - what’s maybe most interesting is that Lucasfilm are completely disregarding canon for this one. I couldn’t be happier with that; it’s given the creators more creative freedom and I have no doubt what we see this september will be nothing short of wacky, wonderful and possibly the most unique star wars stories ever.

First Star Wars thing I’ve been interested in for years

The trailer is here !

Some more info on the nine ‘Star Wars: Visions’ episodes - including episode titles, and also the actors for both the original Japanese voice cast and the English dub cast…

(Z6PO’s link above is to the original, and very cool, Japanese language trailer)

I’ve been feeling quite cynical about Star Wars lately admittedly but this looks really fun and promising!

The Duel “The thing he was really clear on was that he just wanted this to be a love letter to Star Wars,” Waugh said. “The core theme of this short ends up being such a Star Wars story.” The tale is ultimately about someone who must choose selflessness, a core Star Wars theme.

Lop and Ochō features a space bunny-person. Her name is Lop and we love her already. “She is cute and expressive and completely unwavering in her devotion to good and family and loyalty,” Lopez said. “She’s awesome.”

Tatooine Rhapsody is heading into uncharted Star Wars waters. “It’s a Star Wars rock opera,” said Rimes of the story, about a band with a dream to make it big. “We took a chance and they just blew us away with the style and the characters and the tone, and really the heart of what is best in Star Wars about found family and the dream.” It’s also one of the few shorts to feature classic characters, as our heroic band will run into Boba Fett and Jabba the Hutt.

The Twins “subverts the idea of Luke and Leia and imagines a brand-new set of twins born into the dark side, and how far the brother will go to save his sister.

The Elder is a homage to a classic Star Wars master and Padawan relationship,” said Shirasaki. “You’ll also find the dual meaning of the title after you watch the short.”

The Village Bride by Kinema Citrus follows a fallen Jedi, but not in a way you’d expect. The guardian of peace and justice observes a local tradition in a far-off village through the eyes of a bride on the eve of her wedding day, and an unexpected choice she must make to save her people. “It’s poetic, meditative, and romantically bittersweet,” Shirasaki said. “This short also approaches the Force in a really unique and surprising way, too.”

Akakiri is a beautiful yet painful story about a princess.

T0-B1 is a cute and fun story of an adorable droid who dreams to be a Jedi.

The Ninth Jedi “is an absolutely epic story,” according to Rimes. But it actually began as two separate shorts. One was to be set in a time when Jedi have fallen into legend and need to come back as darkness threatens the galaxy, with the daughter of a lightsabersmith seeking out the Jedi and delivering their weapons. The other story was to be told from the point of view of eight warriors coming together, learning if they are indeed Force sensitive and can trust each other. Ultimately, the decision was made to combine the stories in order to achieve something on a grander scale. “We brought those two tales together to create something really epic and special,” Rimes said. “They had us at ‘lightsabersmith,’” added Lopez.

I know we haven’t seen anything from The Book of Boba Fett just yet, but ‘Visions’ looks to me like it may end up being the best piece of onscreen Star Wars media this year. It’s already obvious the creatives have been exactly that - creative as hell and simply running wild with their ideas. I’m really looking forward to watching the shorts on September 22nd.

(I say best piece of “onscreen” star wars media because we’ve already got a couple of all-time highs with Star Wars: the High Republic this year. This is just a reminder to check them out!)

For some reason, people are having mixed feelings about this. I find that funny, considering the large impact Japanese media has had on the franchise. Like, George Lucas basically remade The Hidden Fortress but in space. And don’t even get me started on Genndy Tartakovsky, who hired directly after making Samurai Jack. So yeah, give it a chance. It looks fun.

For some reason, people are having mixed feelings about this. I find that funny, considering the large impact Japanese media has had on the franchise.

Yeah I’ve noticed a lot of people unaware of the Eastern influences behind Star Wars right from the start, and complaining about the addition of samurai figures and the anime style. For me, anime is a fantastic art style which is usually used badly. That doesn’t mean Visions is going to suffer because of it.

Eastern influences are here from the beginning: Darth Vader suit is clearly inspired by Samurai armor. But Star Wars isn’t basically a remake of The Hidden Fortress. These two films have a lot in common, but they are also very different, I think.

Sorry, I’m just being hyperbolic. George Lucas didn’t copy Akira Kurosawa, but he was clearly a fan. At the end of the day, there’s nothing wrong with wearing your inspirations on your sleeve. 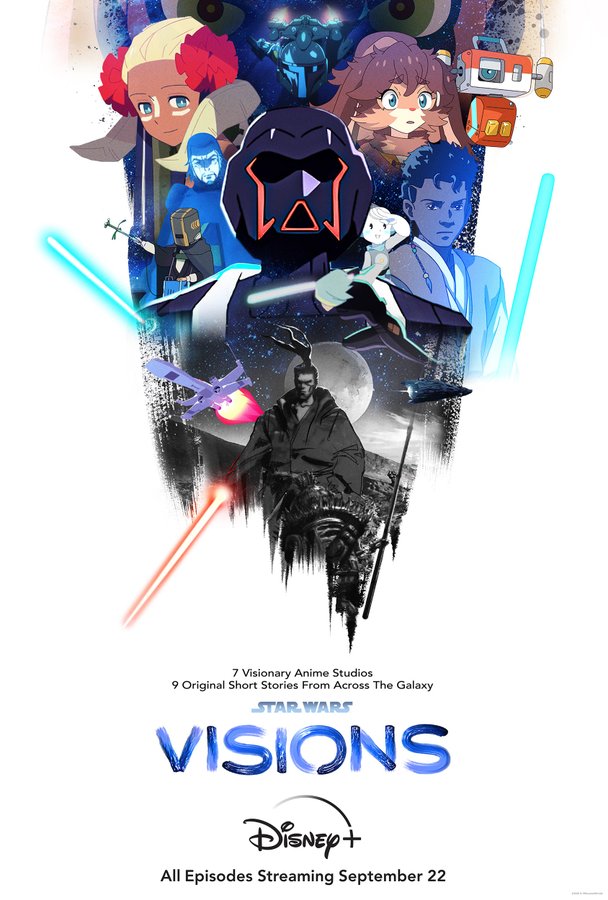 A wandering stranger with a mysterious past defends a village from powerful bandits.

A band with big dreams must save one of their own from Jabba the Hutt and Boba Fett.

Twins born into the dark side clash aboard a massive Star Destroyer.

A Jedi on the run takes in the unique customs of a remote village under threat by a warlord.

The daughter of a lightsaber-smith is pursued by dark forces while on a dangerous mission.

A cybernetic boy, who dreams of being a Jedi, discovers a dangerous truth about his creator.

A Jedi and his Padawan pursue a dark and powerful presence.

A family is torn about what to do when the Empire encroaches on their planet.

A Jedi returns to his forbidden love to help defend her kingdom from a Sith-like Shogun. 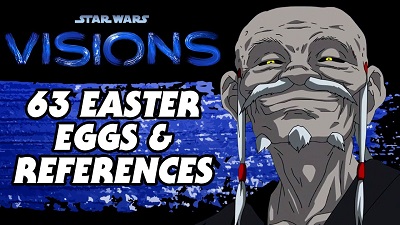 ‘Star Wars: Visions - 63 Easter Eggs and Connections You May Have Missed’ 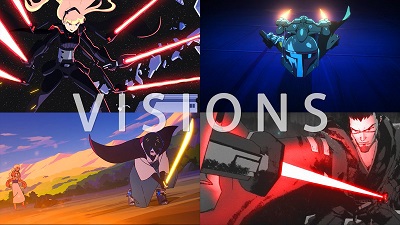 www.youtube.com/watch?v=wwqsGL3LA3A - a 7 minute video at the Amazing Shots youtube channel.