I don’t see that I’ve commented on this before.

why do you buy this 3 times as bluray,dvd and download??
weird…

I didn’t buy those three times. I bought the BR/DVD/Digital set. Slightly more than the BR/Digital set, but a lot less than they are in 4K (which I have no use for). Now, much earlier in my list, I did buy the same thing in multiple formats, sometimes 3 times (the OT Faces set and the OT SE set). I did buy the BR/DVD version of the two trilogy box sets just because I wanted the 5.1 surround from the DVD (which is not on the BR). Probably weird, but there is usually a reason.

I don’t see that I’ve commented on this before.

why do you buy this 3 times as bluray,dvd and download??
weird…

Weird that you’ve apparently never come across a Blu-Ray bundled with a DVD and a digital download code…they’re extremely common (though including a DVD is becoming significantly less common).

Not counting used sets or sequels
but i have those too.

I recently acquired in a lot the Fullscreen DVD of Attack of the Clones and the Empire of Dreams bonus disc.

Captainsolo, You forgot you have the 97SE on Laserdisc, and the 2011 set in the background of your videos is actually the 2015.

Doh! You’re right can’t believe I forgot the SE LD box. That was actually the first major LD purchase I ever made back in about 2009 or so along with You Only Live Twice and The Spy Who Loved Me.
The 2015 BD release is much better than the 2011 because of the slim box and an actual case. I need to track down a ROTS BD copy to complete it.

When my girlfriend moved in, she had the Prequel Trilogy on Blu-ray, the Original Trilogy on DVD and The Force Awakens on Blu-ray. She keeps her collection separate from mine. I bought her copies of The Last Jedi and Rogue One for Christmas last year and will get her The Rise of Skywalker and Solo for Christmas this year. She likes having her own collection.

the ones I have bought …1992 Special Collectors edition widescreen VHS set , I plopped down 120 bucks for it after seeing it in Suncoast Motion Picture Company and it was the first time I saw the film in widescreen outside of the times I saw them in the theater . I had the pan and scan tapes beginning in 1987 after they were given to me in clear plastic cases from someone I knew who ran a small video rental store and got extra copies of the tapes…1997 special edition pan and scan gold box set …2000 Vhs Box set Pan and scan because it was cheap and I liked the packaging . 2004 DVD silver box set .All three of the Walmart exclusive GOUT with the comic adaptations . The widescreen vhs collectors edition of TPM . The DVD of TPM ( it was my first dvd and I bought my first dvd player with it , an APEX which I still have) AOTC widescreen DVD , ROTS Widescreen DVD TFA blu ray ,TLJ blu ray and a friend bought my a basic blu ray player with the 2015 blu ray box set as a gift that year.I also bought the 95 faces vhs pan and scan box for 10 bucks from a dear departed friend in 2010.

I’ve bought the trilogy 3 times:
silver SE VHS set
first DVD set (had no idea this was SE only)
Bluray Saga set (just so I can get fanedits)

Also had the original VHS boxset, which was my most prized possession, but that was a gift.

I’ve bought them pretty much as many times as anyone on here. But my first version of Star Wars was taped off the TV. This was waaaaay back when buying a VHS tape of SW was more or less impossible and certainly out of my financial bounds. My Mum (who I didn’t live with) arranged for someone with awesome TV reception to tape the film and edit the ads out as it played. This was a wonderful surprise Xmas gift and very much a prized possession. I wish I still had it…

The Target-Exclusive 4 Disc version of Rise of Skywalker has been preordered and will arrive soon.

A shame about MVC - they often did some intriguing content and extras like that box. Decent prices too 😃

A shame about MVC - they often did some intriguing content and extras like that box. Decent prices too 😃

HMV have the occasional UK exclusive. There is one at the moment for 1917, and they had some great steelbooks for Blade Runner 2049. Zavvi have some interesting stuff too.

Can’t wait to get my hands on the next version of Despecialized. 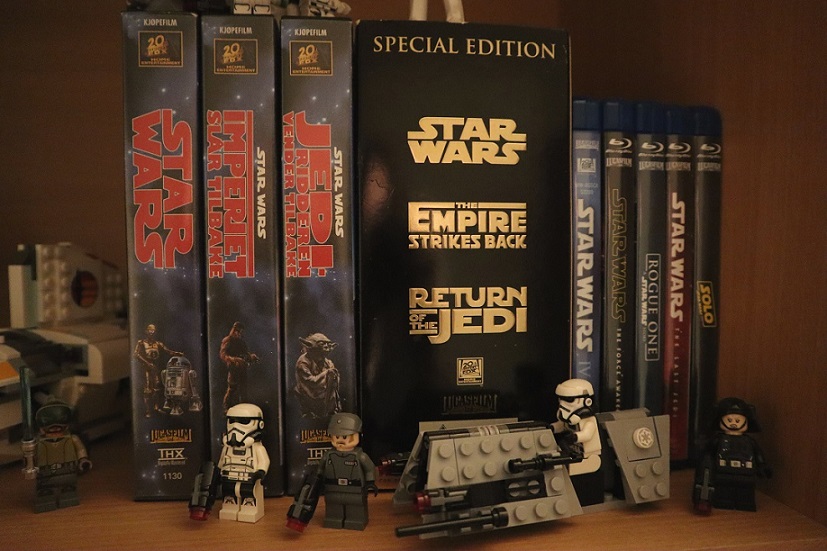 (BTW. I just now noticed the little “1130” code at the bottom of my 1996 ANH tape and now its really bothering me. What a missed opportunity.)

That’s such a nice display there.

That’s such a nice display there.

Thanks. Most of my bookshelves are fairly cluttered, but I try to keep the Star Wars one organized and “decorated.”

Didn’t feel too bad about scooping up the new set because I really haven’t paid for any of these myself more than once, and because it seems likely that this is it for physical media releases apart from repacks. 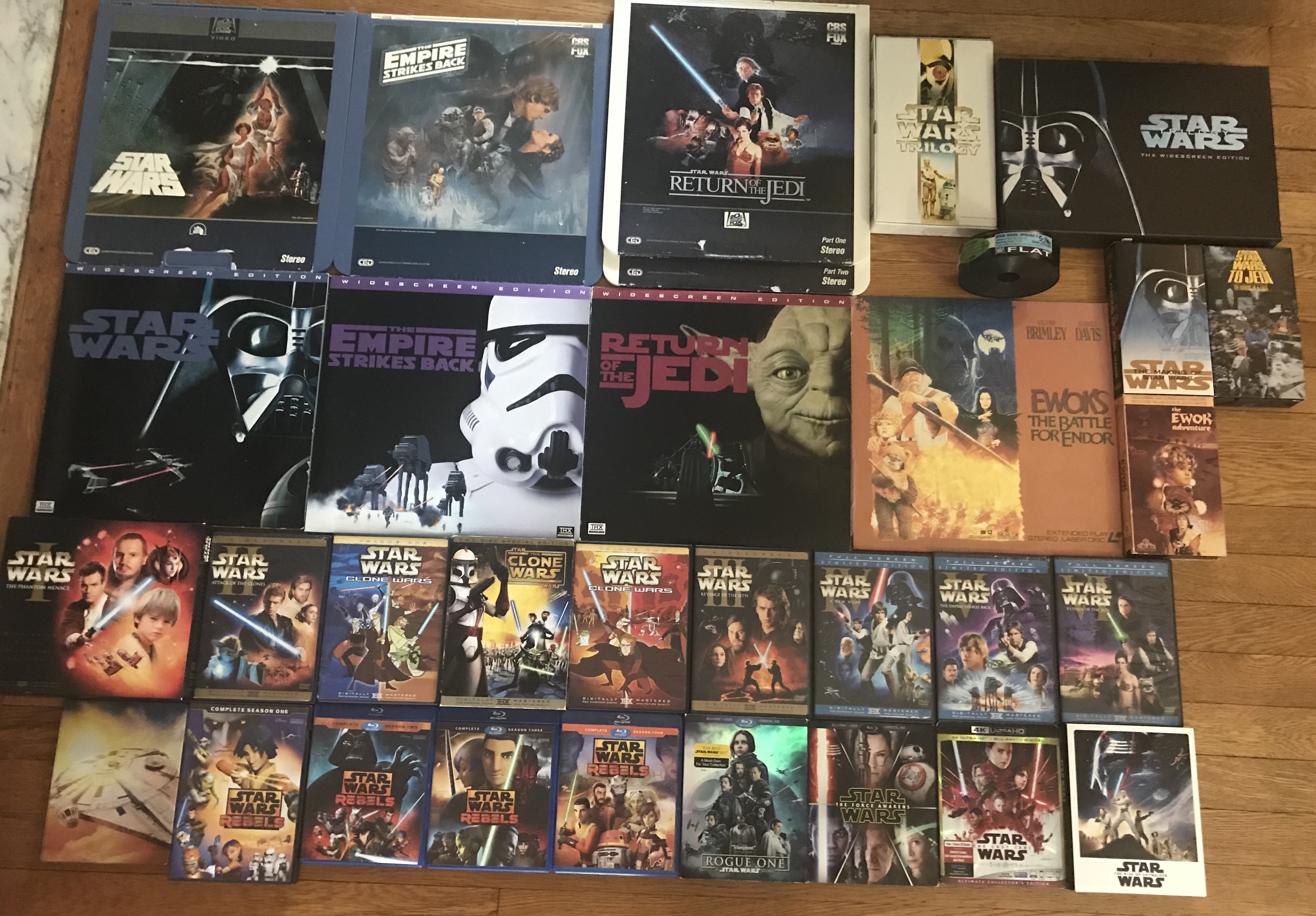 The circle is now complete. Here is a photo of my Star Wars video collection. I have no intention of getting the Attack of the Clones trailer scanned yet.

Wow, you’ve even got CED’s. I don’t think those ever existed on the Scandinavian market (or anywhere in Europe for that matter?) so I know very little about them, are they rare or expensive?

Next time I’m in the US I’ll have to track down one of those Star Wars to Jedi tapes. It’d be worth having in my collection just for that cover. Also, what format is that TPM box on the far left?

Wow, you’ve even got CED’s. I don’t think those ever existed on the Scandinavian market (or anywhere in Europe for that matter) so I know very little about them, are they rare or expensive?

Next time I’m in the US I’ll have to track down one of those Star Wars to Jedi tapes. It’d be worth having in my collection just for that cover. Also, what format is that TPM box on the far left?

CEDs were available in the UK for about a year. That TPM is a widescreen VHS collector’s edition. Above Battle for Endor is a 35mm trailer for Attack of the Clones.