A snippet… The full thing:-

"With the sale of Lucasfilm last year to Disney, came a new hope for a “proper” release of the original, original trilogy – the films generation X grew up watching over and over again. Unless there was some contractual clause we are not aware of (and there certainly could be), Disney does not have any of the emotional hang-ups or concerns about Lucas’ “original vision”, or about trying to tie the original films to the prequels that so concerned Lucas himself. More importantly, Disney has a history of re-releasing classics “for a limited time on Disney DVD and Blu-ray”, simply to make more money. They surely know that releasing a truly high quality Blu-ray of the Original unaltered Trilogy will sell at least a hundred thousand more copies of Star Wars, and could therefore cash in quickly by making a small, but very vocal, section of the Star Wars fan base (myself included) very happy.

However, A year after the sale we still haven’t seen this release – Christmas came and went without incident. While, Disney could be waiting for Episode VII to hit theaters and cash in big at that time, there are other factors we need to consider. A lot of people assume that the original version is locked away in a vault somewhere just waiting to be transferred to DVD and Blu-ray, but the reality is that by all official accounts, the original negative was chopped up to create the Special Edition. A very good, and detailed, documentation of the restoration and creation of the “Special Edition” is available at the Secret History of Star Wars site.

ILM was working on many dozens of new shots, and an even larger amount of enhanced shots, using digital effects to re-do, expand, re-edit and otherwise alter many scenes in the film. When these were completed, they apparently were printed onto film and re-cut into the negative, replacing the original negs, which were undoubtedly put back into storage. As a result, the negative for Star Wars is filled with CGI-laden modern alterations. When Lucas says that the original version physically does not exist, this is what he really means–the negative is conformed to the Special Edition.

That being the case, it would likely be prohibitively expensive to repair and restore the original negative – it would cost millions – far more than the projected revenue from sales. Even that recent “Dear J.J. Abrams” video could only lure about 125,000 people to sign their petition.

As a compromise, Disney could simply scan several of the original surviving 35mm prints of Star Wars (several such projects are underway by fans at the moment, by Mike Verta, Team Negative 1 and others) and create a very high quality 1080p version of the original Trilogy that way, which might appease the fans and be far more cost effective compromise.

However, even assuming that they are able to create a restored version, they would then have to secure co-operation 20th Century Fox which controls all theatrical and home video distribution of both Star Wars Trilogies (at least until 2020), and they own distribution rights to A New Hope in perpetuity. Like the Marvel characters that Fox owns in perpetuity (the X-Men), Star Wars could be seen as something else that they have to hold hostage over Disney. Of course, owning the Marvel characters allows Fox to continue to make X-Men Movies, which earns them millions of dollars, making it a wise business decision. Refusing to distribute a restored original Star Wars Trilogy sounds like an extraordinarily bad business decision. Fox has nothing to gain by doing so, and to refuse is just to say no to what could be a rather sizable pot of cash, so we’re confident that Disney and Fox will be able to reach agreement on this issue. Perhaps they will agree to allow Fox to distribute future Star Wars films – after all, a Star Wars film without the Fox fanfare at the beginning just wouldn’t be the same now would it?

We’ve had our hopes dashed so many times that at this point we all have a “believe it when we see it” attitude, but with Episode VII primed to restart worldwide Star Wars mania, there has never been a better time to re-release the original, original trilogy. At this point, which do you think would sell more copies? A repackaged 2011 Blu-ray (which is still on sale) or an HD version of the films we remember from our childhood and which haven’t been given a proper release since 1995?"

‘A last (definitive) Original Star Wars update for a while’:-

A snippet a screenshot of the article… 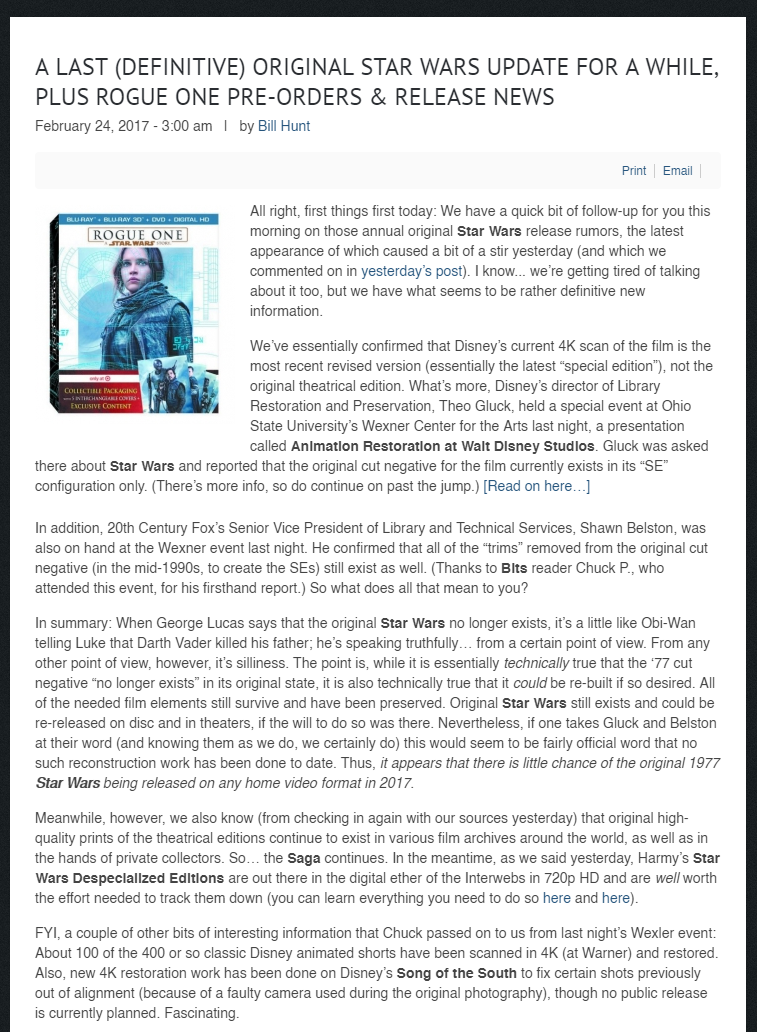 ^ the four links featured in the article above are to…