Now that is quality ! reminds me of the short stories in the Star Wars tales series Dark Horse used to make .This team should be hired by Marvel .

The current main Star Wars series (the one that’s just called Star Wars), will be ending with issue no. 67 and relaunching with a new no. 1 in the near future.

Not a surprising move, given that the story is rapidly closing in on the events of ESB. I hope the new run picks up after ROTJ. It would be cool to start with the Battle of Jakku and cover the early days of the New Republic from there.

How do these constant renumbering schemes not drive collector’s and comic shop employees insane?

^ good question , it’s like DC rebooting their continuity every 10 years or so . I say just concentrate on great art and story and the rest will take care of itself !

How do these constant renumbering schemes not drive collector’s and comic shop employees insane?

From what I’ve gathered it pretty much does.

Ironically it’s meant to make the new issues more “collectible” as they’re officially first issues. Though actual collectors mostly just seems annoyed by this gimmick. They usually print the real number on the cover underneath the new one anyway.

Some times they also do it to pseudo-reboot a series that’s not selling as well as hoped. Don’t know if this is the case here though.

Even if I wanted to collect modern comics from the Big Two, this relaunching gimmickry would deter me quite sufficiently. 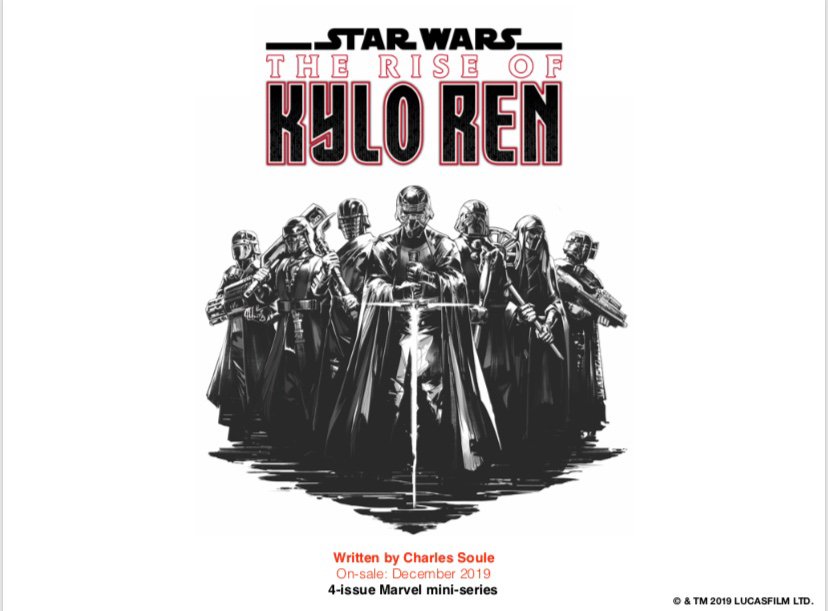 'As just announced, I am writing THE RISE OF KYLO REN - a limited series comic launching in December, just before Episode IX.

You know the one story everyone’s dying to see, about Kylo and the Knights of Ren? That’s this.

At the very least they put their best writer on it. But even then, that’s a story that shouldn’t be relegated to a comic in the first place.

Aye, a little strange that we’re seeing this much anticipated story appear in comic form - though maybe (hopefully) there’ll be a few novels to come on the Knights Of Ren after TROS has aired?

Very much looking forward to the comic though too 😃

‘Covers For Marvel’s The Rise of Skywalker: Allegiance Mini-Series Revealed’:-

As the cover contains a couple of new previously unseen characters for this TROS comic, (whether they’ll just be in the comic - or the TROS film too I don’t know…) so I’ll put the image, and link to the article, in a spoiler tag…

They probably felt that Snoke’s backstory made more sense as a novel, while the more action-oriented Kylo Ren character would work better as a comic. And if Soule does as good a job, or even half as good, as with the Vader series this could turn out quite well. It might also tie in with in-progress or upcoming novels for all we know.

Do we know who will illustrate the series?

‘Star Wars: Charles Soule Pulls Back the Curtain On The Rise of Kylo Ren’:-

Sorry, ZkinandBonez - there’s no mention on who’ll be illustrating the series.

ZkinandBonez - Will Sliney will be 😃

'As revealed at last, the artist for THE RISE OF KYLO REN is my good friend @WillSliney ! We’ve been working hard to make this book sing, and I can tell you this:

Will’s art will break your heart. 💔 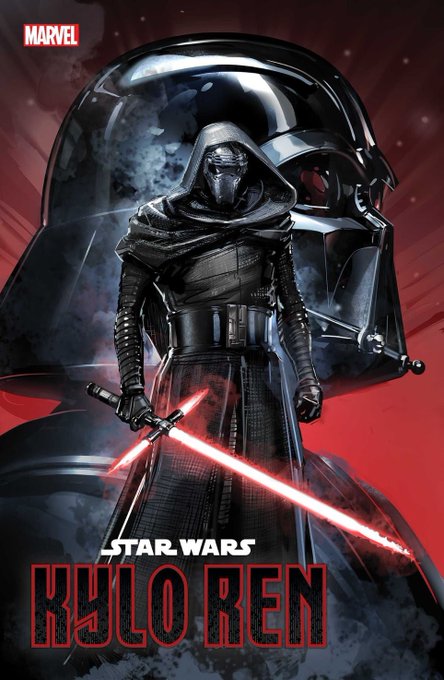 ^ I love that cover! Very much looking forward to the 18th December for this 😃

‘This is the cover to THE RISE OF KYLO REN #2, written by me with art from @WillSliney. Out in January.
And yes, that’s Luke Skywalker and Ben Solo fighting the Knights of Ren.’ 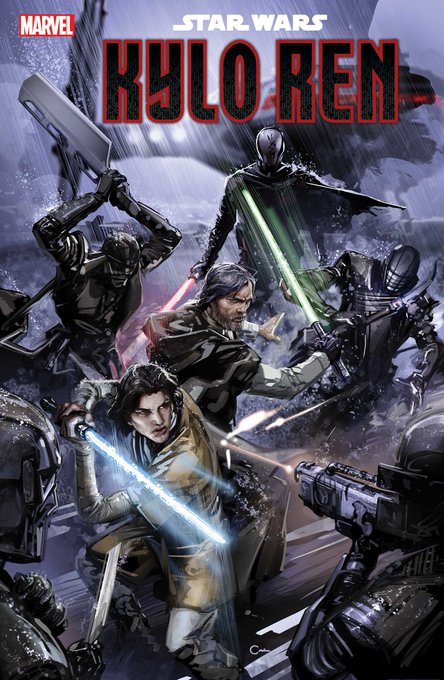 From earlier in the month…

‘As announced at NYCC, in Jan 2020 Jesus Saiz and I relaunch Marvel’s STAR WARS comic with a new #1.
The story begins just after Empire Strikes Back - first 3 pages below. CHOP!
Taking Luke Skywalker from here to the confident warrior we see in Return of the Jedi? Yes, please.’ 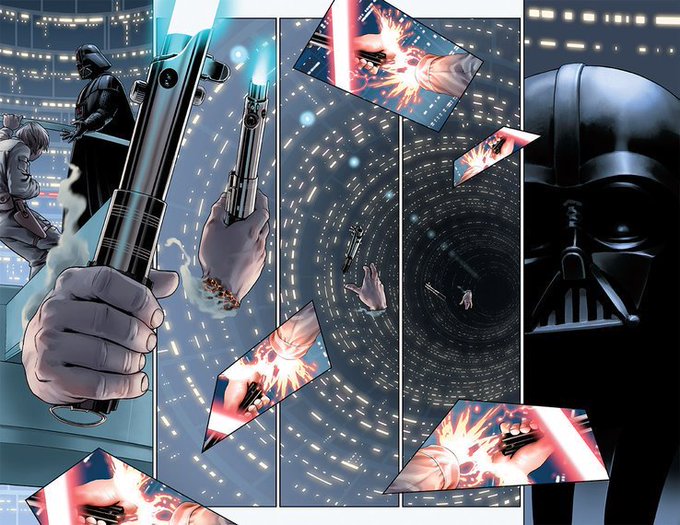 ‘This is the cover to THE RISE OF KYLO REN #2, written by me with art from @WillSliney. Out in January.
And yes, that’s Luke Skywalker and Ben Solo fighting the Knights of Ren.’

That’s a pretty interesting change from what I think most people so far has assumed about the Knights of Ren. A lot of people assumed they were also previous students of Luke’s Jedi academy, but it now seems like they might not even be force sensitive at all. At the very least they’ll be dark jedi, or whatver it is that the new canon decides to call non-Sith darksiders.

ZkinandBonez - Will Sliney will be 😃

I’d hoped Giuseppe Camuncoli would return for this series, but I’m not complaining about Will Sliney. From what I’ve seen so far of Sliney’s art it can be a little bit bland and “safe” at times, though his Solo series had a nice dyamic feel to it, and I’ll take “safe” any day over some of the art that has plagued the new SW comics in the last few years. At least he draws unlike some current artists. It’ll be interesting to see some actual pages from the Kylo Ren comics.

From earlier in the month…

‘As announced at NYCC, in Jan 2020 Jesus Saiz and I relaunch Marvel’s STAR WARS comic with a new #1.
The story begins just after Empire Strikes Back - first 3 pages below. CHOP!
Taking Luke Skywalker from here to the confident warrior we see in Return of the Jedi? Yes, please.’

I don’t really know anything about Jesus Saiz, but it’s good news that Soule is doing the new main series. I thought Jason Aaron did a pretty good job with the main series in 2015, but IMO the series went downhill after he left, plus the art hasn’t been particularly good either. I’m confident that Soule can do an equal, if no even better job at the new main series, especially if he’s going to focus primarily on Luke’s character growth between ESB and ROTJ.

Nice to see them explicitly disconnect the hand from the saber immediately.

I didn’t really know what to expect from Will Sliney, but this actually looks really good.

Also, is it just me, or has Sliney imitated Camuncoli’s style a little bit? The way Luke is drawn reminded me a lot of how Obi-Wan looked in the Darth Vader series.

'Boba Fett will take on the galaxy’s worst in Marvel’s epic ‘War Of The Bounty Hunters’:-

'Back in 2019, writer Charles Soule created a big pitch document for Marvel’s flagship Star Wars series. It outlined his plans for the title, but also included was one specific story he was itching to write.

“Boba Fett clearly doesn’t take Han Solo directly to Jabba’s palace,” Soule tells StarWars.com. “Something had to happen in between that intervening time between Empire and Jedi. And I was like, ‘I would like to tell that story, and I would like it to be about Boba Fett and what happens to him.”

(Lots more info and art in the linked article…)

Edit: and more ‘War Of The Bounty Hunters’ content here:-

‘Marvel’s #StarWarsComics solicits for May are all about the #WaroftheBountyHunters featuring tie-ins to all the monthly series, save for #TheHighRepublic. Ready? Let’s go.’

Might try and get my hands on the Shadows of the Empire comic run to read in preparation for this. I’m sure Charles Soule will have drawn a lot of inspiration from it.

"it builds into something much bigger, and that’s what the best comic crossovers and big stories do. They tell a great story in and of themselves, but they’re also the start of something, and they open a lot of new doors. And this story will absolutely do that.” Prequel to The Book of Boba Fett perhaps? In any case, we’re getting some of the best Star Wars comic creators working on this - Soule, Alyssa Wong, Ethan Sacks and Greg Pak. It really should be “epic”!

'Boba Fett will take on the galaxy’s worst-

I read this as them being the worst at their jobs. Like they’re all just as bad as Boba Fett and keep tripping over and falling into holes. Now there’s a series.

'Boba Fett will take on the galaxy’s worst-

I read this as them being the worst at their jobs. Like they’re all just as bad as Boba Fett and keep tripping over and falling into holes. Now there’s a series.

Those loose bandages of his could be a recurring gag for how he injures himself (and others) each week.

I think you’ve hit gold here. Better than a lot of the stuff on Disney+ (or on tv in general)…

I’m still hoping they actually publish the comics version of The Rise of Skywalker at Marvel. But i know its never going to happen.