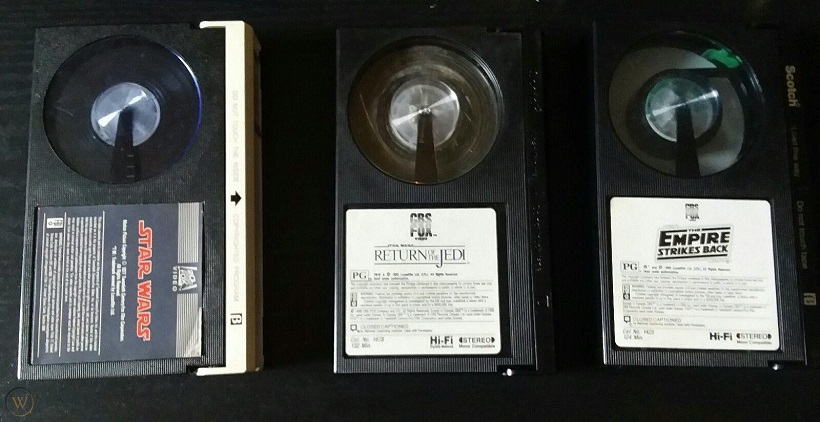 ‘Okay grandpa, just what is Betamax?’ - I hear some of you young whippersnappers ask…

Betamax (also known as Beta, as in its logo) is a consumer-level analog-recording and cassette format of magnetic tape for video, commonly known as a video cassette recorder. It was developed by Sony and was released in Japan on May 10, 1975.

The first Betamax device introduced in the United States was the LV-1901 console, which included a 19-inch (48 cm) color monitor, and appeared in stores in early November 1975. The cassettes contain 0.50-inch-wide (12.7 mm) videotape in a design similar to that of the earlier, professional 0.75-inch-wide (19 mm), U-matic format.

Betamax is obsolete, having eventually lost the ‘videotape format war’ to VHS. Despite this, Betamax recorders were not discontinued until August 2002. Betamax cassettes were available until March 2016, when Sony stopped making and selling them, alongside MicroMV.

^ information and image is taken from the Wikipedia article for Betamax - to which more in-depth info can be found in the link. 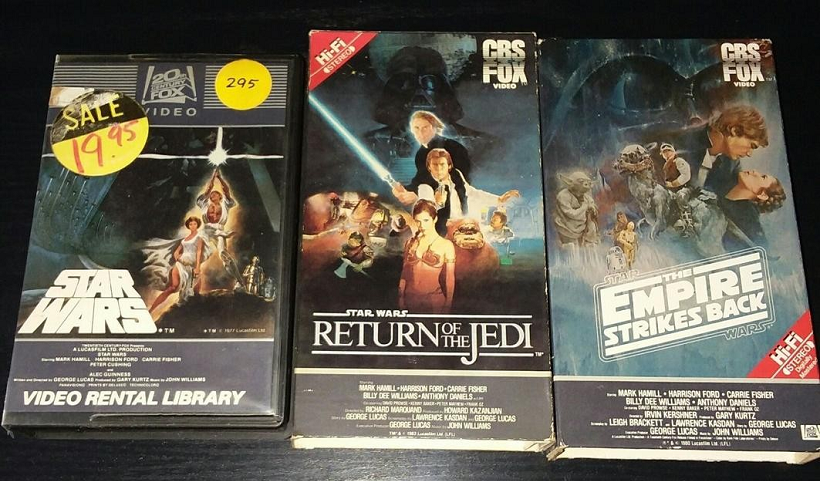 An introduction to the Original Trilogy on Betamax…

Continuing on with some of the more obscure and oft-forgotten formats that the Original Trilogy saw releases for a long time ago… on CED, on VHD, on Video8, on V2000, on VCD, and on Super 8 formats…

1982 was the year Star Wars was released on home video (VHS, V2000 & Betamax) - a full five years after the release of Star Wars at the cinema.

VCRs did existed as far back as 1975 - and many people did ‘record’ the showings of Star Wars on TV onto a blank tape when the film was eventually aired on tv back in 1982 in the US (via PPV; something which only half a million people could access at the time).

Yet very few people had VCRs due to the considerable cost at the time - especially in the late 1970’s and early 1980’s.

In fact Star Wars was still running at some cinemas in the US fourteen months after being released on home video (in 1982).

Official releases to rent or buy…

This was a time when rentals made up the vast majority of the videotape market, and it would be several more years before Star Wars was available to own at a price which many fans may have been able to afford (in 1982 to buy Star Wars on tape was circa $80, and a VCR could cost circa $600).

Not to mention that home video viewers were still only able to view more than half the picture that had been seen on cinema screens - as Star Wars was cropped (‘panned and scanned’) to fit the dimensions of 4:3 TV sets.

In the US and Europe…

Though Betamax was considered by many to be superior to VHS in quality, it lost out in the ‘format war’ - and the last release of Betamax for the Original Trilogy was in 1986 for Return Of The Jedi (in the UK & US). Betamax never saw a ‘box set’ or ‘3-film set’ release of the OT - as VHS did get in 1988 with the ‘Star Wars Trilogy 3-Pack’ set (links to a 22 minute video at the Nathan Butler youtube channel), and many other later VHS box sets in the US and Europe, that is…

Outside of the US and Europe…

However, there was a 1995 release on Betamax for the three Original Trilogy films… in Mexico - with the popular John Alvin artwork used at the time for the more widely available VHS releases. More info on this Betamax release can be found in the video linked to below in this thread. 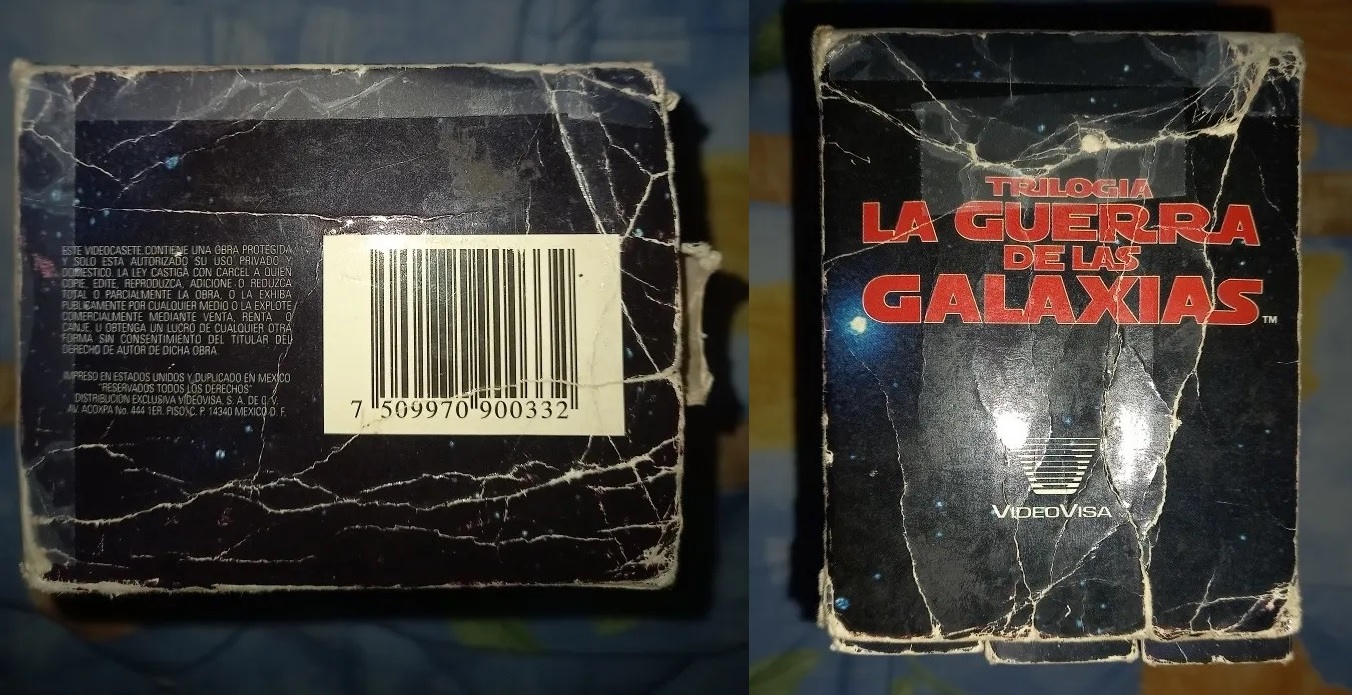 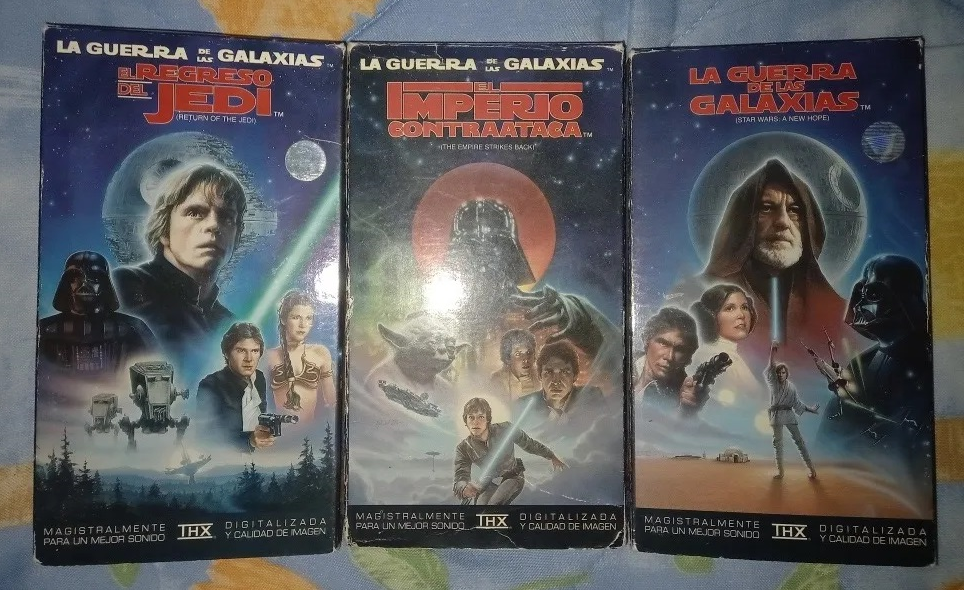 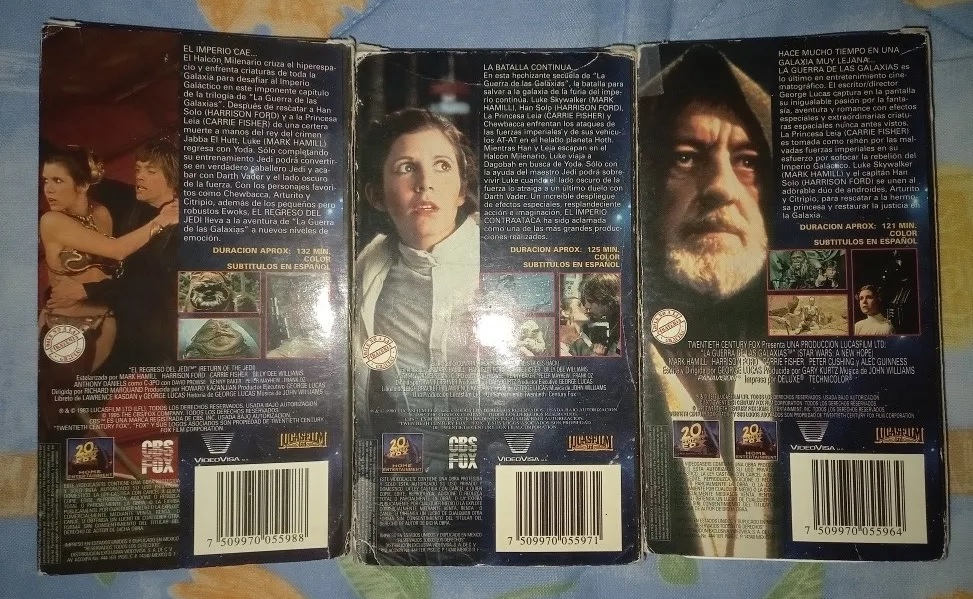 Hello here it is, finally have them!!! i´ll search this for YEARS and it is very very rare in the condition i have. 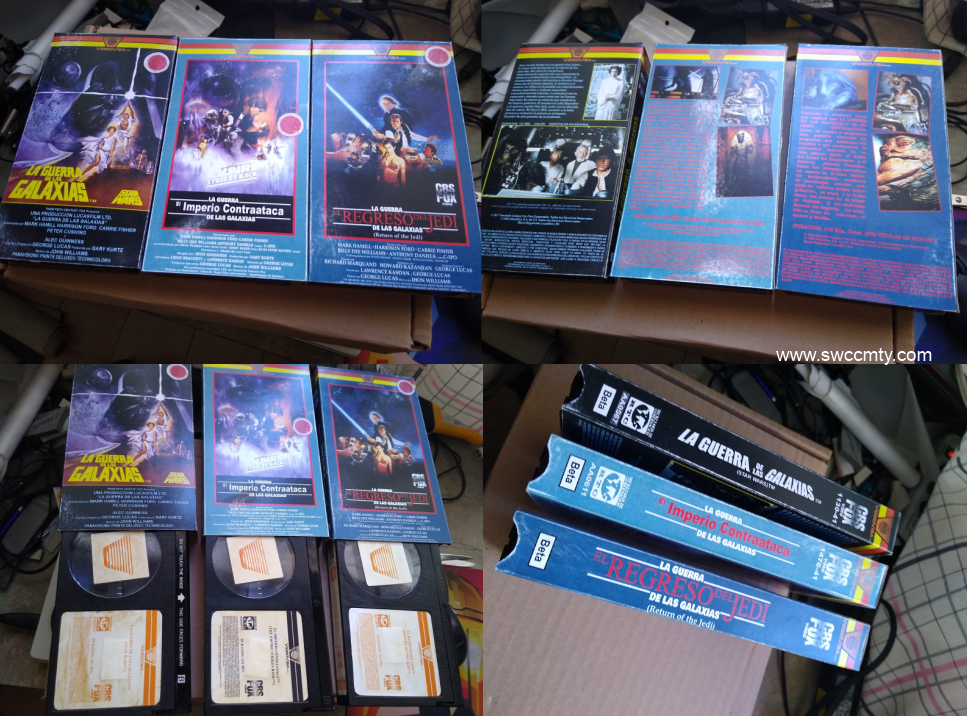 Plus I have Ewoks and Droids cartoon, Ewoks Caravan and battle for endor in mexican BETA and VHS too 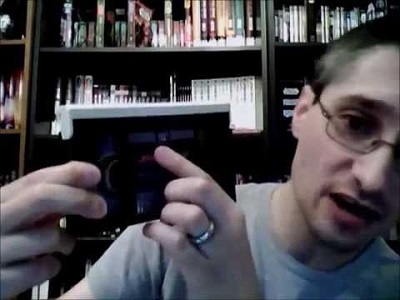 https://www.youtube.com/watch?v=gVKHVBmF_wE - a 20 minute video at the Nathan Butler youtube channel 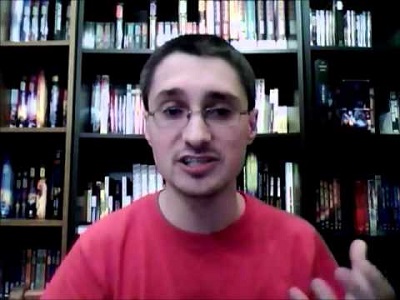 https://www.youtube.com/watch?v=PM8Q9EJTziw - a 16 minute video at the Nathan Butler youtube channel. 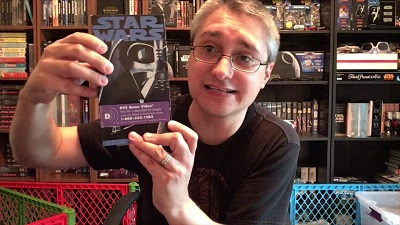 https://www.youtube.com/watch?v=esy-5LOaARA - a 15 minute video at the Nathan Butler youtube channel. 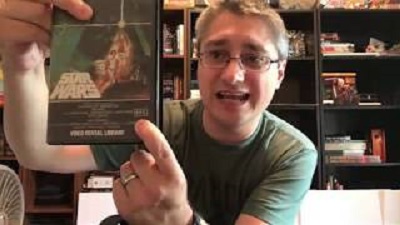 https://www.youtube.com/watch?v=UeaxLj0Je8s - a 9 minute video at the Nathan Butler youtube channel. 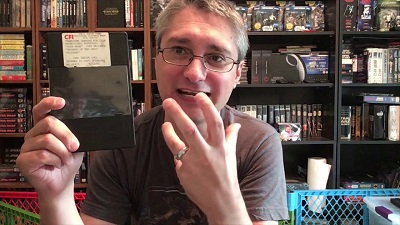 https://www.youtube.com/watch?v=lHuLGpM4Tso - a 5 minute video at the Nathan Butler youtube channel. 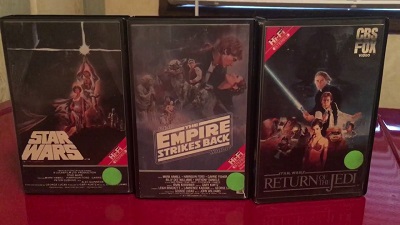 ‘The Starship Review - Ep. 6: Star Wars Trilogy on Betamax’ (all 3 tapes are rental copies from an old video store):- 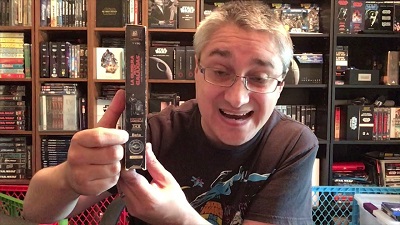 https://www.youtube.com/watch?v=fknIXJjPU1s - a 6 minute video at the Nathan Butler youtube channel.

Betamax Cover Art for just some the Original Trilogy releases (as found on the superb www.starwarshomevideo.com)… 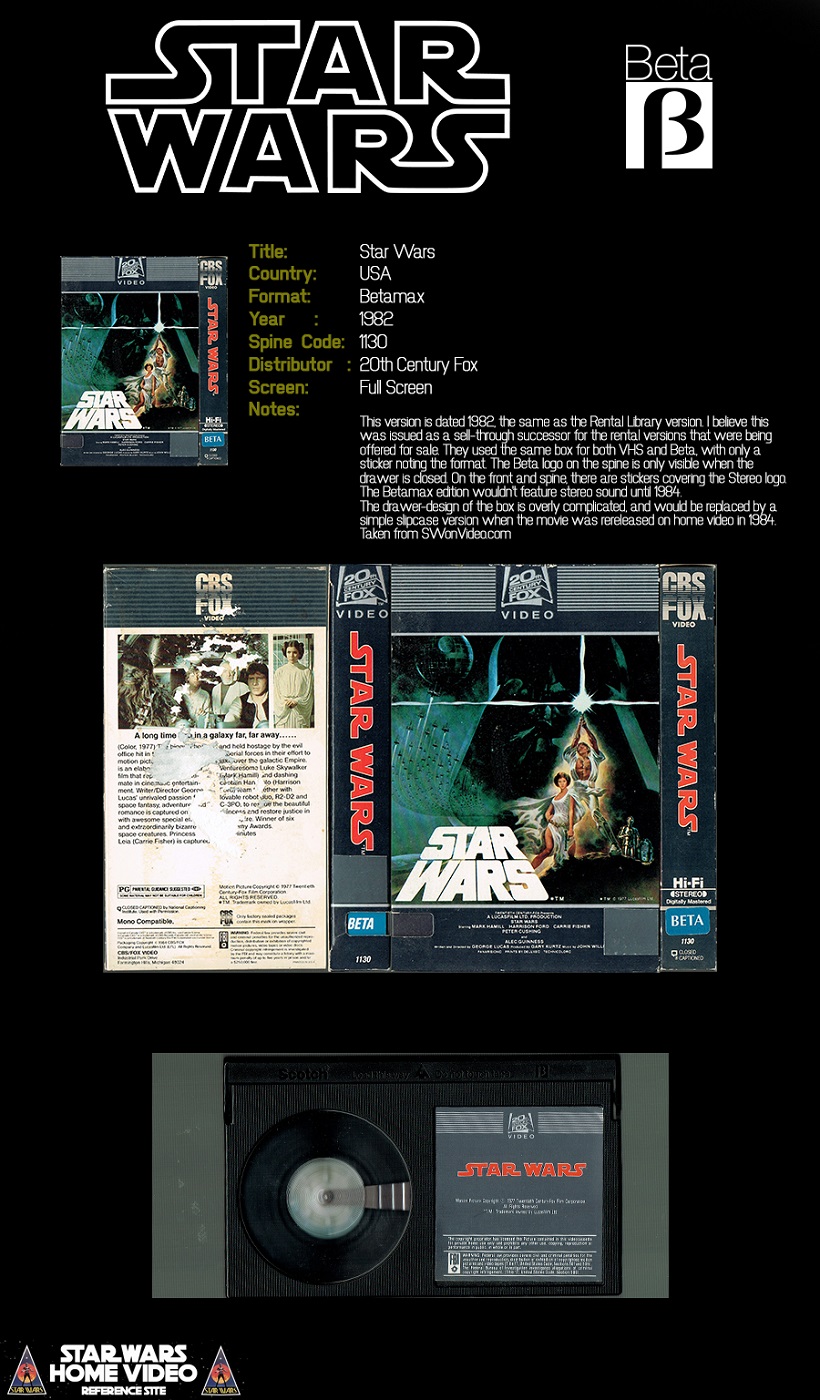 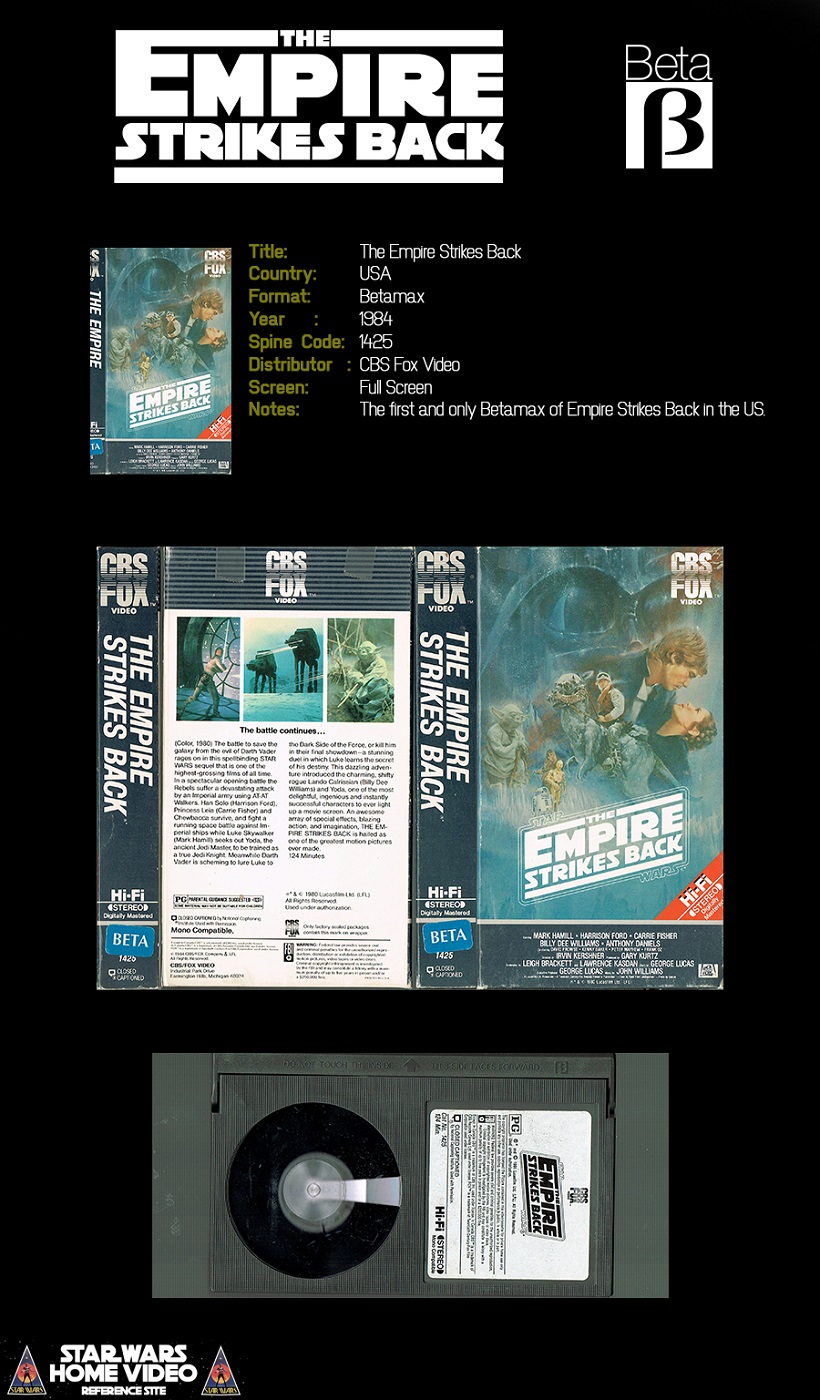 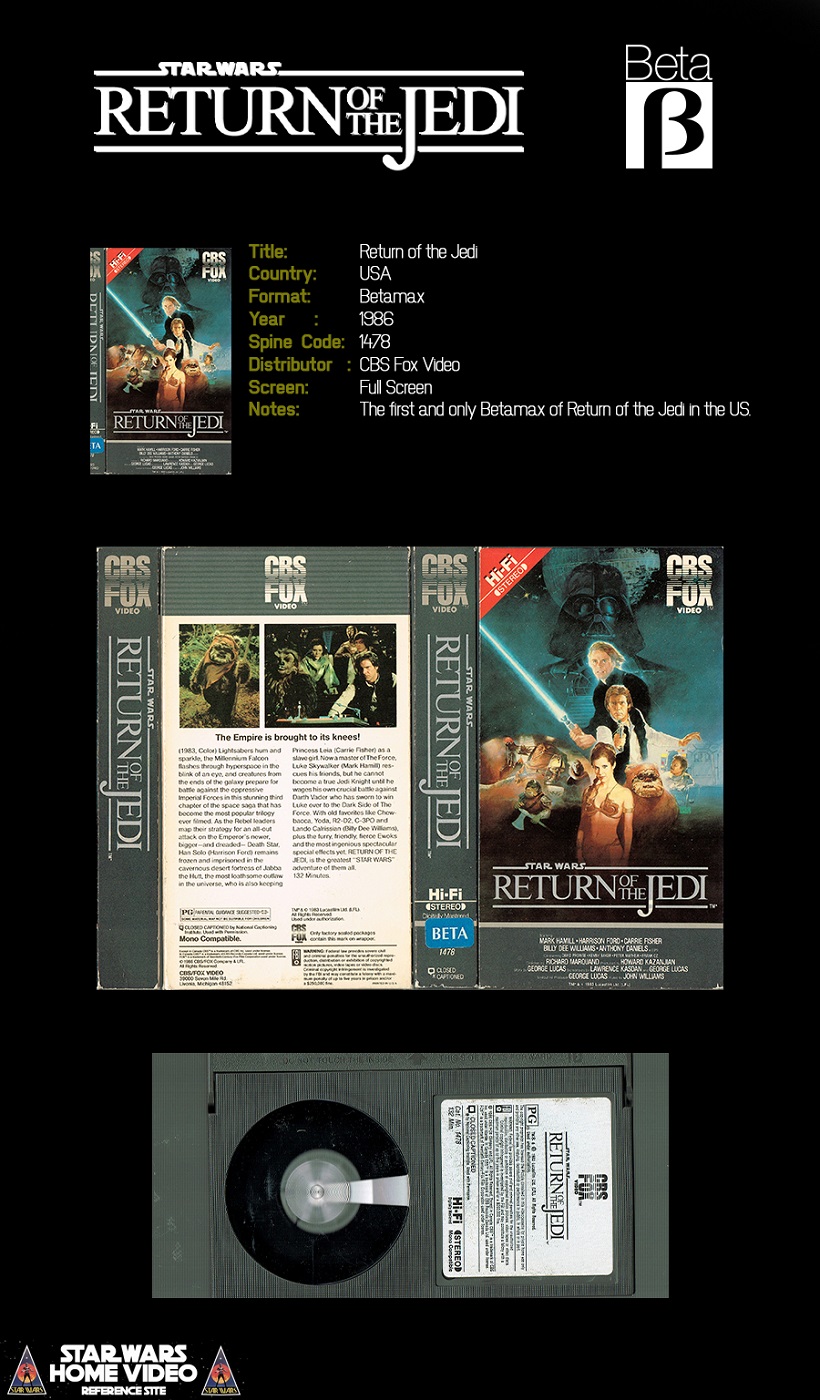 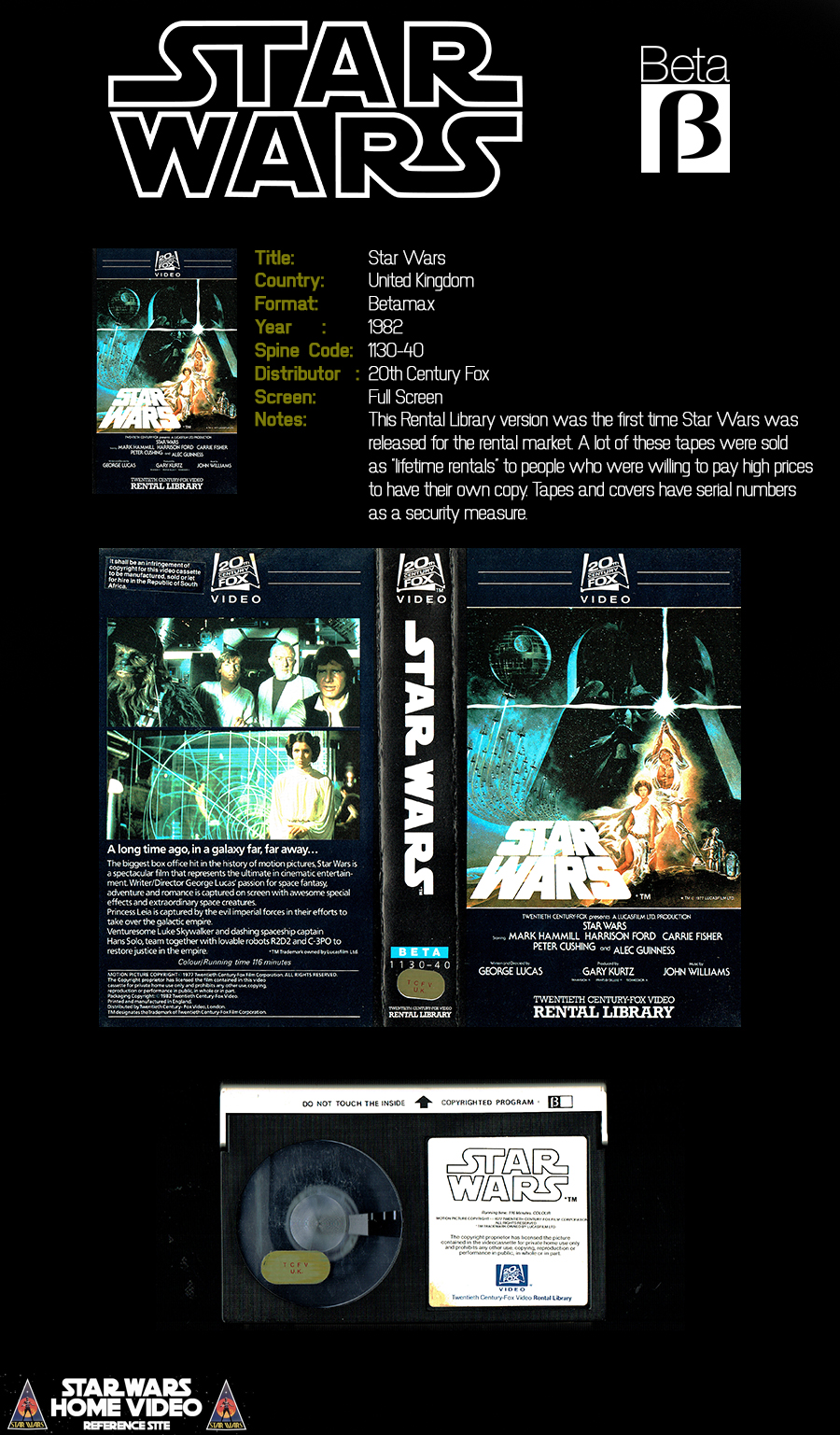 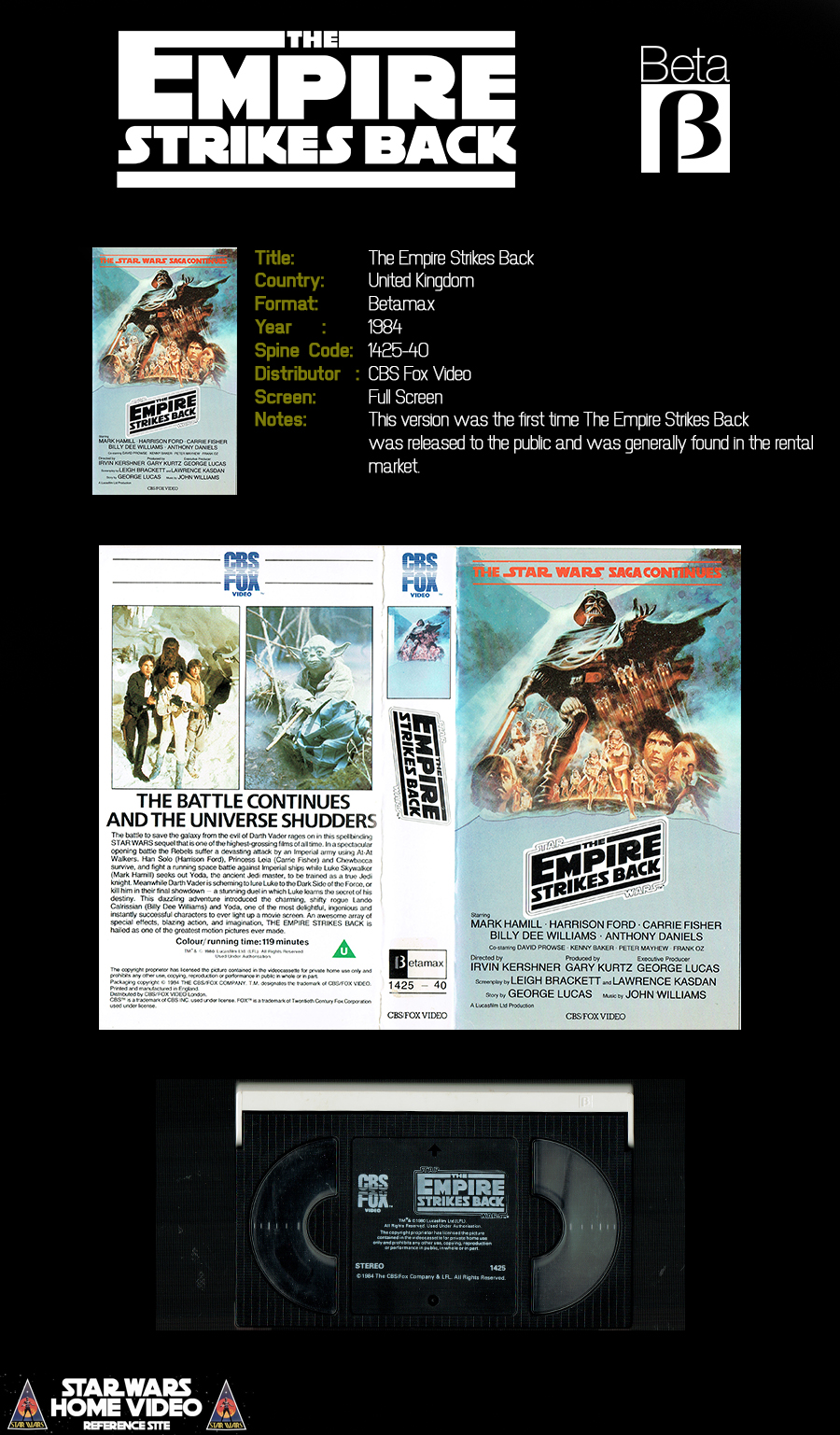 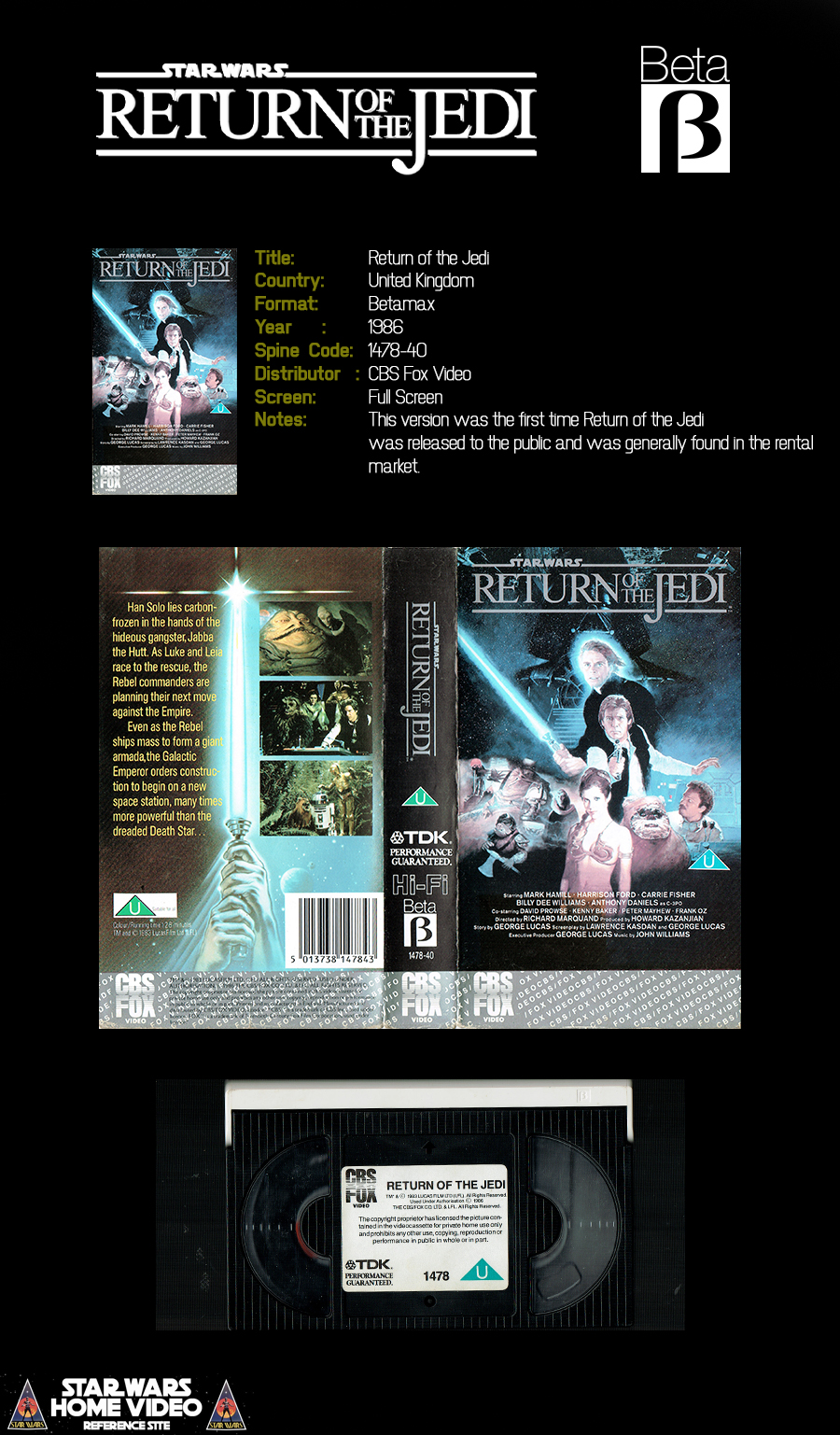 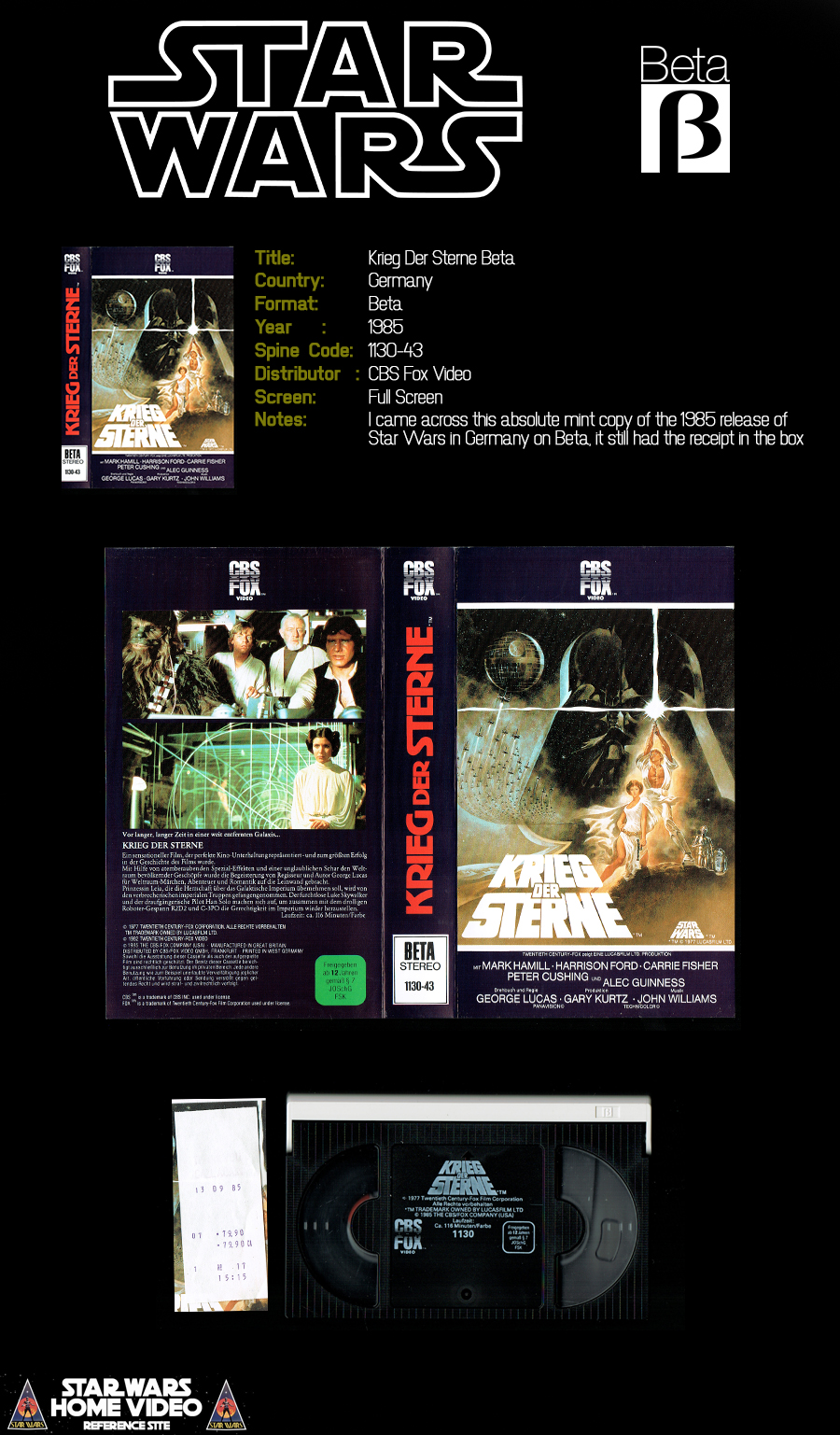 More cover art and info for further variances of the Betamax releases (including rental tapes) - as we all as releases such as ‘Caravan Of Courage’, ‘SPFX: Empire Strikes Back’, and ‘The Making Of Star Wars’, can be found at:-

Rare cover art and info for a 1986 Norwegian rental copy of ‘Return Of The Jedi’, can be found here:-

An image of ‘Star Wars: Droids’ being available for rental on Betamax… 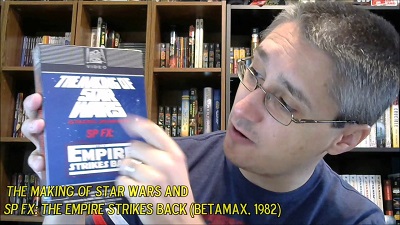 ‘From the Star Wars Home Video Library #21.4: The Making of Star Wars and SP FX: ESB on Betamax’:-

https://www.youtube.com/watch?v=yrlRAQW8u48 - a 3 minute video from the Nathan Butler youtube channel 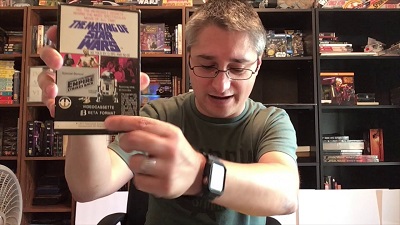 https://www.youtube.com/watch?v=XWYfzXphu3U - a 5 minute video from the Nathan Butler youtube channel 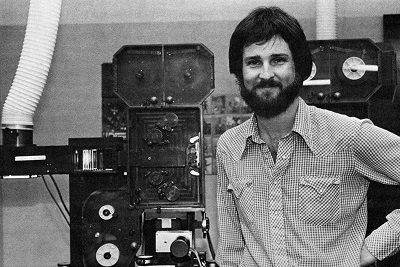 https://www.youtube.com/watch?v=4g4RMM8COW0 - a 12 minute video from the Edutainment Edutainment youtube channel

OriginalTrilogy•com threads related to the OT on Betamax:

• Info Wanted: anyone done a OT betamax and from star wars to jedi preservation? - 2005 thread, by skyjedi2005

• Info Wanted: Anyone ever do a Betamax transfer of the Oriignal Trilogy as a preservation? - 2009 thread, by skyjedi2005

• Theater Performance Preservation - 2010 thread, by none

^ There are also mentions of Betamax releases in some of the Videotape threads in the ‘The Home Releases and Formats of the differing versions of the OT films…’ section of the An Index & Help Thread for Original Trilogy Discussion.

An old postal competition where the 1st prize was a 50" tv, betamax recorder and copy of Star Wars on Betamax:

A magazine advert from 1975 for a Betamax recorder… 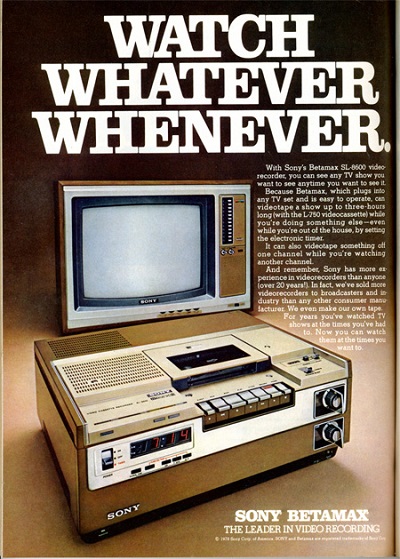 About the Betamax format as a whole… 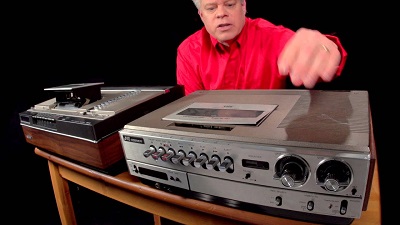 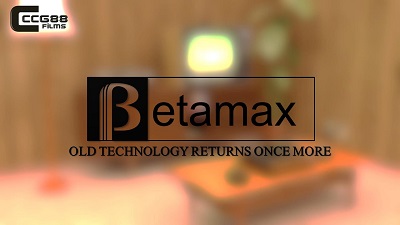 Techopedia for info on the Betamax format: https://www.techopedia.com/definition/32378/betamax-beta

VHS vs Betamax - The Difference: https://kodakdigitizing.com/blogs/news/what-is-the-difference-between-betamax-and-vhs

" VCRs did existed as far back as 1975 - and many people did ‘record’ the showings of Star Wars on TV onto a blank tape when the film was eventually aired on tv back in 1982 in the US (via PPV; something which only half a million people could access at the time)."

I was one of the lucky ones who got to see it on ppv ( pay per view ) . My folks had a subscription to the on-tv ppv service out of Chicago. The box was in their bedroom , so I could only watch it in there , though my older brothers and I could see the scrambled signal on the downstairs tv , which we got great amusement from watching late at night 😃 Sadly , we did not have a vcr at that time , as they were indeed very expensive .Here is an ad for the ON-TV Star Wars premiere that someone recorded back in the day and uploaded to Youtube , also featuring The Wrath Of Khan premiere , which is how I first saw that movie …https://www.youtube.com/watch?v=_Jtuh8Sz9JY the video says 1983 , but it was in fact 1982 when Star Wars premiered on ON-TV

more info about the ON-TV service…https://en.wikipedia.org/wiki/ON_TV_(TV_network) 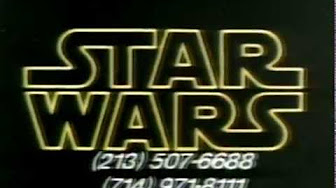 The blurb:
“From September 1982. Promo for the “one time only” special event pay-per-view broadcast of the original Star Wars on pay TV subscription service.”

BTW, I’ve posted both this and the previous video in the OT Trailers & Promos thread as well.

^ Thank you for updating this so the thumbnail shows ,I wasn’t sure how to gt it to show up.

I have return of the jedi on Beta. I bought Star Wars and Empire but the tapes arrived in the mail broken.

So all i have is Return of the Jedi, and somehow i misplaced my Making of Star Wars and Empire Strikes back Beta tape. I also have no player. Like CED i bought them with the intention of doing so but never did.

My Jedi tape looks unused except for the sticker seal being broken, it was probably watched once. The box is in immaculate condition, in nicer shape for sure than my first issue VHS tape.

The 1988 Betamax release of the Original Trilogy for Mexico…

Hello here it is, finally have them!!! i´ll search this for YEARS and it is very very rare in the condition i have.

Plus I have Ewoks and Droids cartoon, Ewoks Caravan and battle for endor in mexican BETA and VHS too

They look to be in fantastic condition too!