This is the thread for posting any and all ideas pertaining to editing the Original Trilogy, although knowing Star Wars fans, it’ll probably be 90% about RotJ.

do you mean “the original trilogy radical redux ideas thread”?

I find it funny this site began as a petition to return star wars to the originals… and now we are discussing ways to radically alter it.

Well, both can exist as long as both are available.

The David Lynch Cut. Make it as batshit insane as possible, then reveal at the end that it was all just a fever dream Luke had after being rescued from Cloud City.

I feel like the ‘It was all a dream’ ending would be dumb, but I really would love to see a David Lynchian edit of Jedi.

I have seen that video before and it is pretty funny! It is an interesting “what-if” that highlights some of Lynch’s signature elements, but I think if he had actually made Return/Revenge of the Jedi, it would have been more comparable to Dune than anything else. I don’t know if it would have been much different than what we got, besides being more serious and a little creepier maybe. Though I think there was only a 5% chance of that ever happening.

I may have mentioned this before, but something I think would be cool to see in an eventual Revenge of the Jedi edit, sort of like Snooker’s project, would be for Luke and Vader to swap lightsabers like the ‘Revenge’ original poster portrays. 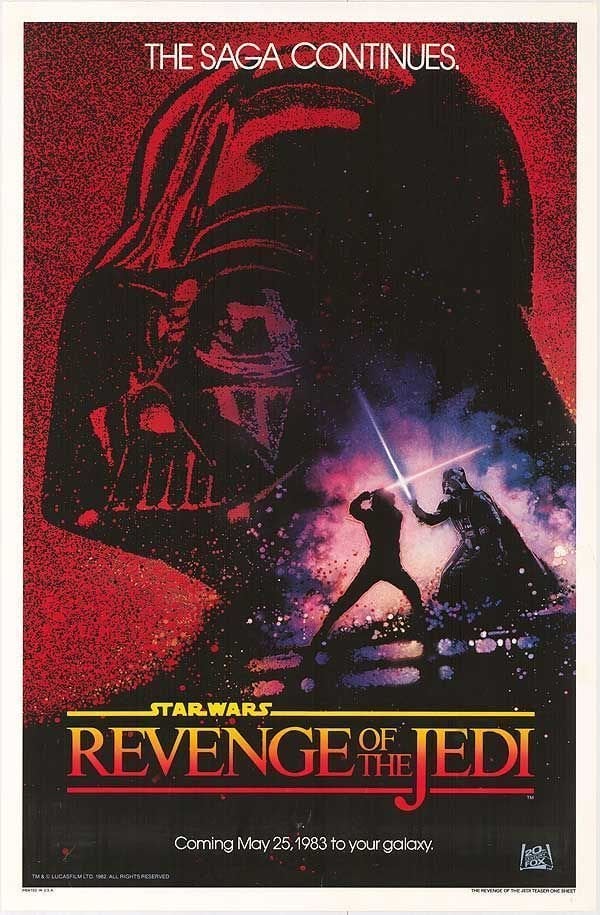 While I believe this was a mistake by the artist, I think that image really sparks one’s imagination, and I can imagine how it could happen. After Luke falls off the catwalk, you could insert somewhere (maybe it is the first shot we see when the next time we return to the Throne room) the shot of Vader holding Luke’s lightsaber earlier in the film, to show that Vader has picked up Luke’s saber. Then when Vader triggers Luke, Luke gets Vader’s saber and uses it against him. It could help sell the idea of Luke being on the edge of turning to the dark side, and Vader using a green/blue saber could foreshadow him turning back to the light a few moments later.

You could keep it green like it is in the final film, but it would also be cool to see Luke with a blue saber since it originally was suppose to be blue.

I could definitely see that as a moment that kids would have flipped out over back in the day. Just a fun what-if.

EDIT: You would also have to replace the saber hilts in a few shots, but it probably wouldn’t be noticeable for the wider shots.

Alright, here’re all my ideas for Return of the Jedi: The David Lynch Cut:

Alright, here’re all my ideas for Return of the Jedi: The David Lynch Cut:

Many of these ideas are actually good.

Except that Luke already carries the supporting cast on his back for the entire movie.

Except that Luke already carries the supporting cast on his back for the entire movie.

I would watch a David Lynch cut if only to satisfy whatever curiosity the concept might cause me.

That was harrowing. Especially the Shining score.

Based on Dune, perhaps we could hear the characters’ toughts! Or use a narrator 😁
Perhaps doable using the audiodrama…

do you mean “the original trilogy radical redux ideas thread”?

And now I have an excuse to do so.

Search your feelings. You know it to be true.

Note: After doing this test I realized why Adywan decided against doing it 😦

Instead of Luke bringing his saber to Vader, he goes unarmed. Vader decides to show Luke one of his trinkets from the past.

And here’s the one that I’m really excited about:

WATCH THE GIF BEFORE OPENING THE SPOILER

Luke takes Vaders saber from his belt, then this happens:

One of the problems with Jedi is timing during that night on Endor.
Clearly they had all the shots to do something more logical, but we ended up with some confusing sequences.
So anything that makes Luke going to Vader better will help.
Ideally we should see him walk towards the Imperial Walker…