Interesting little visual tribute to what I believe was one of the very first SW images shown to the public.

Or the Holiday Special

Well, the Mandalorian’s main weapon is taken directly from the Holiday Special cartoon.

In terms of coolness I always thought the Mandalorians have nothing on The Emperor’s Royal Guard, but the seedy side of Star Wars has always interested me so I am willing to give this a shot. Hope Nar Shadda is visited at some point.

‘I’ve never met a Mandalorian, I’ve only read the stories.’

‘Here’s the first in a collection of custom art inspired by #TheMandalorian’:- 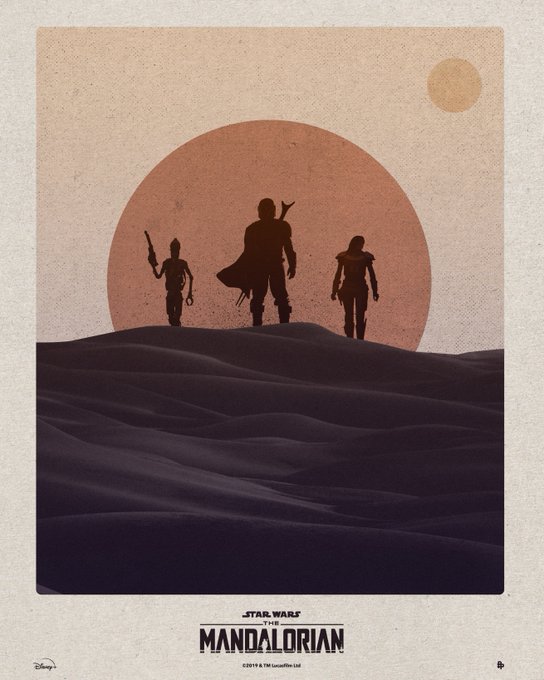 There has been some awesome art for The Mandalorian so far, I hope the rest of the collection is as striking 😃

Just realised this is now a ‘no spoilers’ zone, so I’ve moved my comments over to the other thread to be on the safe side.

So without spoilers… what are people saying/thinking about the series? The trailers look great but they can be deceptive…

I enjoyed the concept art over the credits more than the episode itself. The pilot was oddly… inert. Didn’t live up to the trailers at all, and I wasn’t taken with those, either. Also had plenty uninspired stock humour, pretty generic writing, lacked visual flair, but I think I might be comparing the cinematography to Yedlin’s work on TLJ, and that’s not a fair comparison.

So overall I’m not impressed.

I LOVED it! Felt far more like Star Wars than the ST ever has. It’s so obvious it was made with care for fans by fans. So many nods to various things. It’s surprisingly dark in tone with some of the action and a little of the humor. The main character is intriguing and I can’t wait to find out more about him. Similarly, the end of the first episode has me excited to see more!

Has anyone heard anything about there being physical releases of the Disney+ Star Wars content?

So without spoilers… what are people saying/thinking about the series? The trailers look great but they can be deceptive…

I thought it was pretty good. It starts out well but then quickly gets bogged down and becomes too “marvel cinematic universe”-ish, in a not so great way. Luckily it picks back up and the last half or so is pretty great. It leans hard into the “western in space” concept and that is a very good thing. It’s far from perfect but I think it has great potential.

One thing mentioned in the spoiler thread, but not really a spoiler (I hope y’all agree…) is that it uses original music and doesn’t really rely on John Williams’ body of work at all. That felt a little jarring at first because we are just trained to expect his music to pop up frequently in anything Star Wars. The fact that this show was completely devoid of Williams’ music was rather jarring at first. I actually think it works to the show’s benefit but it does take some retraining of your mind’s “muscle memory” so to speak. Now that I know to expect that, it’s totally fine and works.

I thought the main characters were good. Some of the bit parts (especially one blue alien) were either poorly written or poorly acted (or both) but all the key players did a nice job. The Mandalorian is intriguing and I’m eager to see where his story goes. IG-11 is also awesome. I don’t want to spoil it for those who haven’t seen it, but I really love how they wrote his character and also how they brought it to life onscreen.

Ok, cool! I’ll have to check it out then! Thank you for sharing your opinion.