This article is a fun read.

Ewoks Are the Most Tactically Advanced Fighting Force in Star Wars

“In this single engagement, the Ewoks manage to overwhelm and completely defeat a technologically superior force simply by using conventional military tactics and the principles of multi-domain operations. Through the synchronization of direct and indirect fire, close air support, combat engineer principles, deception, psychological operations, and massing their forces at the key point in time and space, the Ewoks demonstrate their proficiency in land warfare. Other Star Wars universe forces—the Gungans and the Galactic Army of the Republic in particular—show their own flashes of tactical brilliance, but none of them come close to matching the Ewoks in their ability to coordinate the effects of combat power.”

Handrails all over their homes at the Ewok Village: 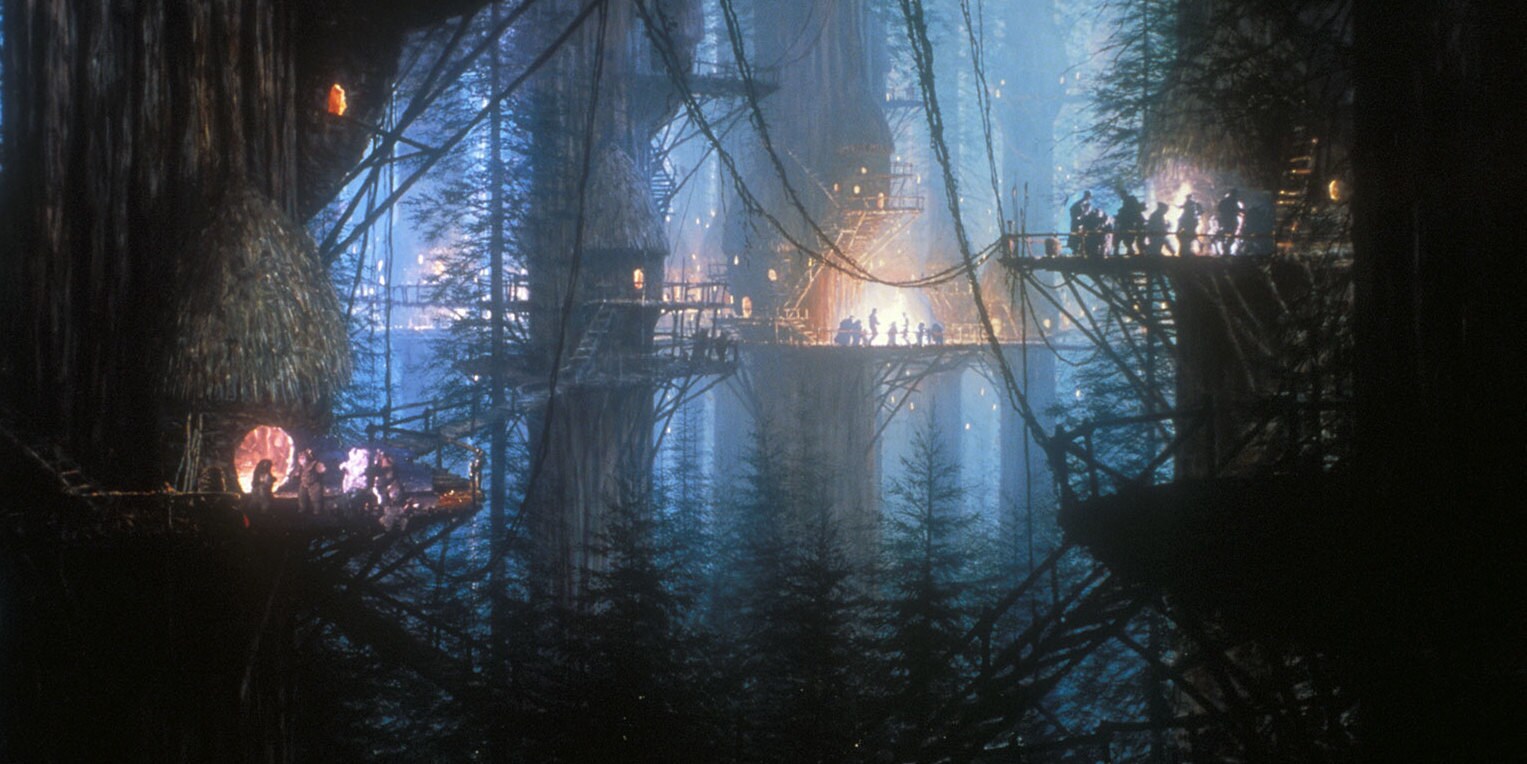 The Empire (not so much):

Yet another win for the Ewoks there… 😉

Where’s the Ewok pic from?

It is ‘Bright Tree Village’ - up on https://www.starwars.com/databank/bright-tree-village

(though I think I remember it from being a cool matte painting scene highlighted on one of the 1996 Topps cards).

this thread inspired me to watch ROTJ again today . 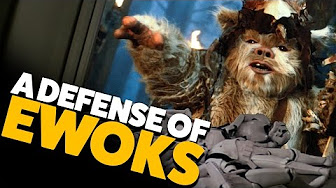 A Defense of Ewoks
https://www.youtube.com/watch?v=prNOwClygdI - from the EC Henry YouTube channel (3:30 mins long)

Great video. I always like the theme of natives using ingenuity to defeat a more technologically advanced occupying force. This context about the Vietnam War isn’t something that ever dawned on me, but it makes perfect sense. Thanks for sharing this, Bonez.

I can see why many viewers hated the ewoks. They were cute, they were slapstick, and they were transparently there to sell merch.

But let’s face it, that has been part of Star Wars from the beginning… what do you think those Jawas were doing? Or Yoda? Or the ughnaughts on cloud city playing keep away with Chewbacca? Even beepy R2D2 is meant to appeal to that “oh cute I want that toy” mentality. There have always been “little, sorta cute” characters in Star Wars, and all of it is designed to sell merch, not just these guys. They’re just the most overtly marketed to kids. Whether you’re selling a model X-Wing, a “replica” lightsaber, or a fluffy ewok doll, it’s the same thing.

So some of the “hate” for the Ewoks is hypocritical, but at the same time, you can look at it like the Jar Jar effect. In Episode I, Jar Jar Binks is a walking joke. He’s a slapstick cartoon character like Roger Rabbit and most of the people around some just kind of take it in stride. In ROTJ, Wicket, who is portrayed as kind of a “kid” Ewok (even though they’re all small) is the slapstick one. Just as not all of the Gungans were like Jar Jar (even if Boss Nass made goofy spit noises for some reason), not all the Ewoks were wicket, knocking himself out with rocks. Consider the Mandalorian. From the way some people tell it, half the success of that show is due to adult female viewers fawning over the cuteness of “baby Yoda” (and the other half seems to be “had nothing to do with the disney sequel trilogy.”)

Humor has always been a part of Star Wars, but people tend to forget. Some of it may be because if you started out watching Star Wars as a kid, say, age 6-7, you were 12 or 13 by the time of ROTJ. Maybe you felt silly watching muppets and fuzzy characters dancing around. I remember not wanting to watch “Sesame Street” at that age because it felt babyish, and so that may be a factor. Today there are adult female viewers who will be like “aww, those cute porgs!” so maybe there are different views. I can see not liking them because they seem like a babyish product placement more than a cool plot device.

To me I can see why people hate the Ewoks, and they can be legit. The Imperial forces have been steadily diminished in threat, to the point where they are like the Nazis in Hogan’s Heroes more than the Nazis of the actual war. The less of a threat, the lower the stakes for our heroes. Some have analyzed the battle footage of Endor closely and chalked it up mostly to Imperial incompetence. They’ve come up with elaborate excuses for why it’s realistic or not that crazy for the Ewoks to do well in the battle. The ewoks took massive casualties. They may have been fighting the “best troops” but the Emperor was overconfident… he was distracted with the Skywalker drama and not “battle meditating” his forces… and by this point in the war, his “best troops” of those that were left weren’t all that great… most of the troops were on the other side of the forest moon (they came in the back door remember), the Ewoks were fighting for their “golden god” and the Imperials were unprepared, they were just thinking they were going to arrest the group of rebels and that was that, etc. And all those traps they had built to stop the Walkers, well those were needed as explained in the Ewok Adventure specials (which came out AFTER ROTJ) that they had giant monsters roaming around Endor so those were pre-existing technology for survival. Great stuff. A casual viewer will be like “whoa, these guys suck… beaten by teddy bears, let me guess it was the will of the force right? Suuure.”

The idea of it being Wookiees beating the Empire, or acknowledging that in real life superior forces have lost due to incompetence and bad luck, doesn’t change the fact that some stone age teddy bears did beat the Empire, at least with the help of a handful of main characters (with ever-present character shields). Sure, it’s impressive that they beat the Empire, but MAYBE by this point, just about anybody could… (not even getting into the typical EU narrative, which is that it took another 30 years for them to beat the Empire for real, oops just kidding and then the “first order” took over where they left off).

I didn’t hate the Ewoks as much as some people did, maybe because I was a kid when ROTJ came out, and I didn’t hang out with superfans (until high school), and for me that was just the norm of Star Wars. I didn’t play pretend to be the Ewoks. I wanted to be Luke Skywalker, or Lando, or Darth Vader. I didn’t find C3PO annoying (but I didn’t really watch Empire Strikes Back as much as the others, and within a few years I found Yoda annoying, though much later I found him funny). Our tastes change as we mature. I think its clear what the Ewoks were there for, and they’re not perfect, but they’re just as much a part of the original franchise now as Jawas or Yoda. I think as a kid I didn’t notice anything amiss. Later on I disliked Wickit, but now I see him as just a “junior ewok” and not really that big a deal. If this were being made today and I were somehow an advisor for the filmmakers I might advise against making them that transparently a toy ad for little kids, but then again if it was really going to be that profitable, how could they say no?

And really, you can say the Ewoks were terrible and then say “but compared to what was to come later… they weren’t that bad!” The creature design is certainly more interesting than just having a bunch of people with their skin painted in primary colors with a handful of latex slapped on their foreheads. For a much more kidified version of an Ewok battle, check out “Battle for Endor” Ewok adventure special (it’s the right thing to do).