I just tried a little experiment with watching my 95 faces set VHS copy of Return Of The Jedi …I have a Panasonic 4 head hi-fi stereo vcr and I plugged it into my 55 inch LG lcd tv via coax cable and ran rca cables out from the vcr to my little Emerson portable tv/vcr combo so I could watch it on both displays .

The portable tv is mono and the big lcd is stereo . I placed the little tv behind me while watching the big tv . This had the feeling of being outside at a drive in movie . The Big tv was great for the sound effects and music and the little one enhanced the dialougue .The 95 tape has pumped up colors from the releases prior to it , but on the lcd , the colors appear more toned down , making it seem closer to the theatrical colors .

Granted , the vhs image was softer on the lcd and a little fuzzy around the edges , but this gave me a feeling of 1980s nostalgia , as it was the pan and scan version and that is how I originally watched the movies at home before the 92 letterbox set came out .I have not popped this tape in in ages and forgot that the last shot of the movie as well as the credits switch to letterbox on the 95 tape .

I would like to get a small stereo crt tv with rca inputs and try this again sometime , but daisy chain 3 tvs .

Does anyone else out there have some unique ways of watching / displaying the movies ?

A mate back in the 80’s had one of these (or something very similar to it):- 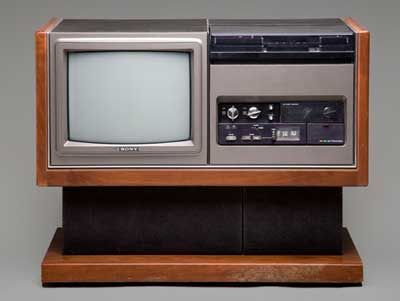 The 80’s ‘fuzz’ and wavy images on the screens all added to the vibe of the films for us - especially on those low-budget horror films like Puppet Master, the Hammer Horrors and even sci-fi films like the OT, The Last Starfighter, Battle Beyond The Stars etc.

I do remember us trying to record the hired OT tapes by rigging up two VHS machines together - and the rigmarole involved in doing it… sometimes successfully, many times not (or the quality being so bad it was not worth the effort!)

Top thread screams, I may try and see if the old video player still works over the weekend, and give Star Wars (a '95 Faces tape) a watch on it…

^ Thank you for the reply oojason ! Please let me know how your experience goes if you decide to do that . Love the pics man , that first one is the first Sony Betamax player that was released as a tv/console combo before they made a standalone player . It retailed for around two thousand dollars here in the U.S. when it was new and adjusting for inflation ,one could buy a new car in todays money ! I love old tech like that and would love to own a working one , if I didn’t live on the top floor of my building 😃 also love the analog glitchiness of that gif .

As a related aside , a while back , I hooked up my old Apex DVD player to my little vcr/tv combo and made a copy of The Force Awakens on vhs for my own personal use .It has kind of a cool retro feel to it and if I had the technical know how , I would convert it to pan and scan to make it feel more like an 80s tape .

On my next watch-through of the OT I plan on watching them horizontally mirrored (so left becomes right and right becomes left). I tested it out before on a couple scenes, and I was pretty amazed how fresh and new it made these shots look that I’ve seen a million times before. Maybe the closest you can get to “see[ing] it again for the first time”

^ this sounds like a neat idea , especially the Vangelis music .It may sound like blasphemy , but now I am thinking of synching some of the original Star Trek movie scores with the OT to see how it feels .

I tried watching The Empire Strikes Back on mute while listening to The Wrath Of Khan score recently . It didn’t really work as a whole , but if you separate certain tracks and play them over certain scenes , it works pretty well . The track "Surprise Attack " from the Khan score worked very well when played over the battle of Hoth , just as the ion cannon fires .

I moved onto another weird way of watching the Star Wars movies , I call it the surreal flashback order. I patched in my little crt,vcr combo to my big 55 inch lcd through the vcr .Stereo tv in front , mono tv in back of me .Started with 95 pan and scan faces vhs of A New Hope , followed by 2000 collectors letterbox Phantom Menace vhs ( turned my tv settings to black and white ) and then TESB 95 pan and scan vhs , followed by pan and scan vhs of AOTC ( again in black and white )and then 95 pan and scan ROTJ. I have gotten this far in my marathon. I don’t have Revenge Of The Sith on vhs , so Iam thinking of watching either the dvd or 2011 blu ray . For that one , my 55 inch lcd is 3d enabled and has color settings which can put a green ,blue or red filter over the image . I am thinking of watching ROTS with a red filter over it the whole time .

While not the way I would watch the movies all the time , it’s been a fun experiment so far .Watching TPM in black and white after ANH , you can really see the parallels and how much it repeats things from the original movie .Plus ,in black and white , it feels more like a flashback and kind of a high tech version of Fritz Lang’s Metropolis mixed with the old Flash Gordon serials .The only real “spoilers” are Yoda and Jabba and you could assume Anakin is just Luke’s father at this point ,as they don’t reveal yet that he is to become Darth Vader .Plus , it starts to set up and foreshadow that something is not quite right with Obi-Wan’s telling of events in ANH

Watching the 95 faces set in full screen vhs in this marathon , gives the whole thing a surreal , dream like feel with the slight fuzziness and softer colors .

And watching ROTS completely in Red , I think may give the movie even more of a decent into Hell vibe and be very surreal . It will provide the last piece of the puzzle for the original 6 films and end in tragedy ,with a note of hope at the end .Now that I think of it , I may switch back to full color at the end when Luke and Leia are on Alderran and Tatooine .

I may continue on with the sequel trilogy , but mix in the anthology films with them and watch them on different displays .

I hooked my old Laserdisc player up to my now ancient HDTV and used the zoom button to make it fit the screen. I was watching the Japan Special Collection for Star Wars, Empire Strikes Back and Return of the Jedi.

I found that they look better on my old picture tube TV that is square and 4:3 standard def.

I can confirm Pink Floyd’s Dark Side of the Moon does sync up with The Wizard of Oz. It’s a very trippy experience.