Which type of methods were used in coming up with the lightsaber duels depicted in the OT? European fencing? Asian swordfighting?

Well, I don’t know much about the ANH choreography but for ESB (and subsequently ROTJ) Mark Hamill studied Kendo (Japanese fencing) and Bob Anderson coordinated the fights in addition to donning the Vader suit for much of the lightsaber fight sequences. Anderson was an Olympic fencer before becoming a Hollywood sword and fight choreographer.

For the prequels Ray Park (Darth Maul) is trained in Northern Shaolin and (primarily) Wushu Kung Fu. He competed at the international level before his film career.

The choreographer for the prequels was Nick Gillard who started as a circus performer before transitioning to a very long and successful film stunt career. A quick and completely UNcomprehensive google search doesn’t reveal any formal martial arts or sword combat training, which when coupled with his circus background might explain some of the common complaints about the prequel choreography (baton twirling…).

I’ve never really looked into who worked on the sequel trilogy fights, although I always really enjoyed the fight between Kylo Ren and Rey in the snow in TFA. The fights in TLJ and TRoS are vastly inferior choreography in comparison.

FWIW I took Olympic style fencing for a few years in college and then spent a decade practicing and competing in Kendo regularly. I also studied a small amount of Iaido and Battojutsu and have a strong general interest in sword combat and general medieval combat (european and Asian). IMO the ANH fight between Vader and Kenobi is the most “realistic” sword fight in the whole franchise, the ESB duel is the best stage combat that’s realistic “enough” and is terribly fun to watch, and the Snow fight between Rey and Kylo really does a great job conveying the sheer intensity of sword fighting to the audience while also being very entertaining. The prequel fights are mostly preposterous and cringe inducing. And finally, NONE of it is even remotely ACTUALLY realistic when compared with actual sword combat. It’s make believe space wizards with laser swords. And that’s ok!

A big difference between the OT and the PT swordfights was the influence of Chinese wuxia martial arts films on the latter, I think. The PT fights also feature one-handed lightsaber fighting; during the OT the idea was that lightsabers were heavy like European broadswords and required two hands.

^I’ve seen the interview where Mark Hamill talks about that (heavy, two-handed swords). But the minute you watch the duel in ESB that arguement kinda goes out the window. Both Vader and Luke use the sabers single handed at various points in the fight.

But yes, Chinese martial arts (specifically thru Ray Park and his king fu training but also more broadly) definitely had a big influence on the PT choreography whereas the OT is much more classic European and Japanese in look and feel.

Though it’s worth mentioning that accurate broadsword and medieval European fighting looks very little like typical “European” fencing that we see in film (which is largely influenced by Olympic fencing) which is more based on renaissance and later sword styles than earlier medieval “Knights in armor” type fighting which had already largely been lost by then. Historically accurate medieval broadsword fighting is actually pretty wild and brutal if you’ve never seen it.

If I had to pin the OT fights to one style or influence, it would actually be Japanese sword fighting. That’s what it really looks the most like (which makes sense given the heavy influence of jidaigeki films on Lucas and his ideas for the Galaxy Far Far Away).

But, again, these are INFLUENCES. Nothing seen on screen really “accurately” portrays any sword fighting style or technique.

I should also note that the “backwards” sword grip used by Ahsoka in TCW and Starkiller in The Force Unleashed game is something used by Zatoichi, the blind swordsman protagonist of a famous series of jidai-geki movies.

Normally real combatants would only use such a grip on occasion, as it increases grip strength at the expense of flexibility and range. It’s not something people would use all the time as a standard grip. But as a blind man Zatoichi probably uses it so the sword doesn’t get knocked out of his grip. Ahsoka has no excuse.

The “backwards” grip of Zatoichi and Ahsoka is purely movie magic. It’s completely impractical and nigh useless in real combat. There might be a few random techniques that briefly use a similar grip for very specific movements before switching back to a more normal grip, but I’m not aware of ANY martial art that uses that as a standard grip for the basis of the fighting style.

And for what it’s worth, it absolutely doesn’t improve your grip strength. One of the first things you learn in Kendo is how to grip the sword. The strength is in your thumb, pinky, and ring finger. It’s hard to explain without demonstrating it in person, but it’s absolutely true. And it’s true with all hand held weapons from katana to spears to knives to rapiers to fencing foils.

Heck, it’s the reason modern fencing grips look like this:

I have no idea but i think Empire has the best duel. I think the prequels are like dance choreography, or at least Episode I is. There is a lot of flashy movement. That is not to say i hate it. I like Duel of the Fates but the originals had better sword fights. The sequels only had one duel which was good force awakens. The one film where there should have been a duel Last Jedi didn’t have one. They missed a chance to have Luke be a badass instead of a Force Hologram.

Bob Anderson worked on stunts and stunt doubling for all the OT films to some degree. He’s Vader for the fights in ESB and Jedi. 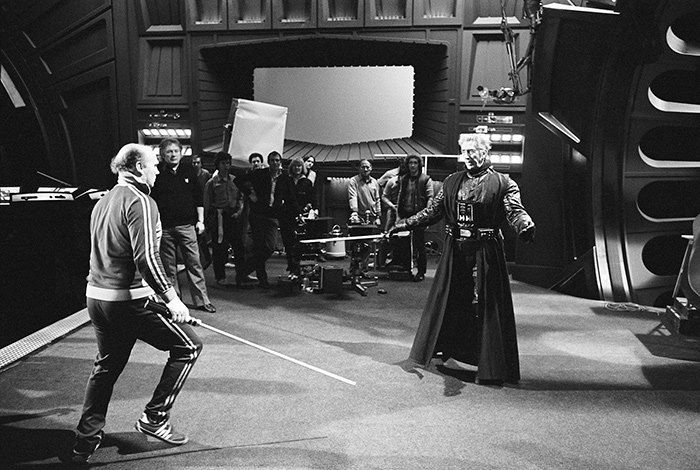 I’d love to see a lightsaber hilt similar to this.

While less extreme in execution, Count Dooku’s curved hilt is based on the same principle: 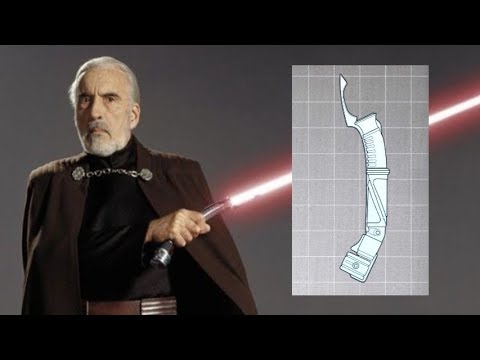 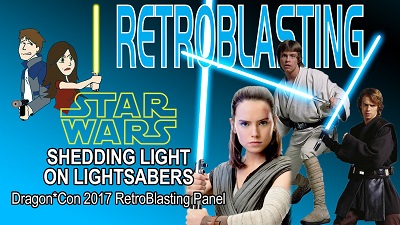 The blurb: ‘RetroBlasting teams up with Star Wars at DragonCon track once again to deliver a presentation about the history of the lightsaber within the Star Wars saga. We’re going across the galaxy to shed light on lightsabers in this DragonCon 2017 panel!’

^ Some quality information and insights into lightsabers in the Star Wars films and tv series (though mainly in the OT).