It does. Verbatim discs have the best reputation if you look around at reviews. And I can add my two cents to that sentiment as well.

Verbatim discs for me too - I wouldn’t even consider another brand (I’m sure there other good brands too).

For many years it has seemingly been the brand to trust and rely on - and many people on here recommend them.

Is it just me, or have all of NJVC’s tinypic images on this thread broken?

Might this be another wave of the photobucket debacle, since they own tinypic?

Is it just me, or have all of NJVC’s tinypic images on this thread broken?

Might this be another wave of the photobucket debacle, since they own tinypic?

The ones in the OP work for me. Unless they’re just saved to my cache… 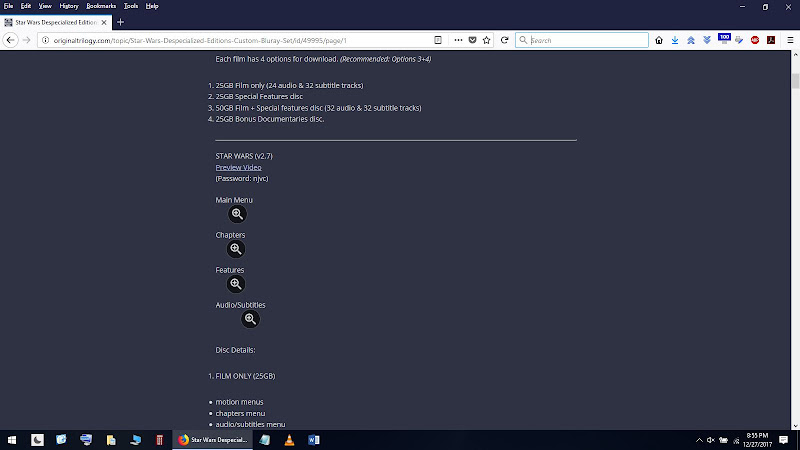 Working for me too.

And now they’re back for me as well. And I did nothing to fix the problem on my end at all.

I’ve seen that happen a few times here or there. Probably a glitch in the Matrix. 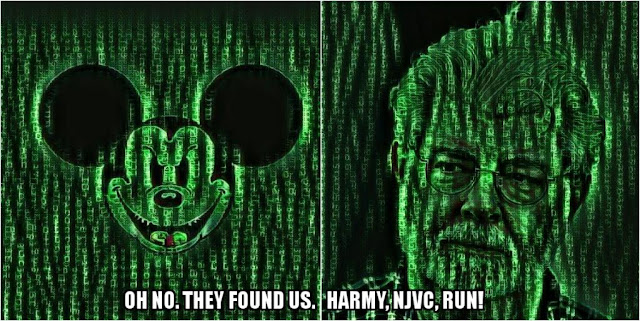 Amazing Work! Just finished printing and burning and i can say everything works and looks very professional.
![Yes]
Thanks to ronwlim for the fantastic artwork.

What brand/type paper did you use for the paper insert?

towne32 said:
but also confused that you would spend money on it instead of an affordable BD burner. I think I’m still confused about the last part, if you go beyond the trial.)

You’d be way better of DL’ing and burning Harmy’s old AVCHD versions, which were built from the ground up for DVD9’s. Even though they’re now completely obsolete relative to the standards of the BD releases, they’d still look better than what any cheap program would produce after quickly mashing down these newer releases to fit on DVD…

Yes, that’s another great point. You could always remove the main feature and burn the extras to a second AVCHD. But, with no disrespect to njvc, the quality of the video in the extras is not the selling point of the set, and some of them are already quite compressed.

Also, I find BD-Rs to be more reliable than DL DVD-Rs. Fewer write fails for me with BD. DVD-R tech is known for using shitty dye (I believe they are not expected to have the lifespan of even CD-Rs). It’s worth considering saving up for a BD burner, which can be as cheap as $65-80 bucks. But compared to spending cash on software for DVD-R burning, I think it’s a no brainer.

Make sure when you get a blank Blu-Ray disc, to get one that is marked as “HTL”. You don’t want “LTH” Blu-Ray discs, which are similar to CD-R’s DVD-R’s in quality and dyes used. HTL Blu-Ray discs will last a lot longer and have less burn errors. I recommend looking at Digistor or Verbatim DataLifePlus Blu-Rays.

A while back I picked up this Pioneer Blu-Ray burner. I wanted a slot loading one: https://www.pioneerelectronics.com/PUSA/Computer/Computer+Drives/BDR-XS06

I hope i am not spamming your thread njvc. let me know if i should move this elsewhere.

Here is what i have done with phildesfr’s covers so far:

(Note, i did these for the 50 GB versions, and haven’t included anything about the Documentary disks)

RETURN OF THE JEDI:

Download includes disc covers and other sides of the insert/leaflet at 300 dpi: https://mega.nz/#F!Y0g13C6A!sHwfcwb09H7VSV0prLUgJg

JEDIT: added ROTJ, and minor updates to all inserts

Absolutely loving these discs! Once the set is complete, these are going to become my “official” set. One minor note on the ESB 50GB from myspleen, the on-screen menus list the commentary track as “Laserdisk” commentary instead of “Laserdisc” commentary. Obviously not worth an update by itself, but it would be great if that could be corrected in some future version.

Thanks! I’ve fixed that error in my Jedi set now (good timing, as I’ve been making final changes), and will fix it up in ESB once 2.5 comes out.

Awesome work Dahmage! If you add disc art for the Documentary discs it will be perfect.

I’ve also been working on disk art using the same amazing set Dahmage has used. Here is a very simple design for the Documentaries disks, and for the bonus fanedit disks that I will be including in my finished set.

Do you have the disc art files that are still edible? i.e. you could move the logos and things around?

Hey Ryan, I know you’re exited about your project, but you’re starting to spam. The answers to all those questions could have been answered with a little searching on your part or with PMs to individual users. And quoting big chunks like that clogs the thread.

As far as the Discs go they are only 720p, but still vastly superior to the official blu-rays. You won’t regret the the effort of getting them! 😃

Hey Ryan, I know you’re exited about your project, but you’re starting to spam. The answers to all those questions could have been answered with a little searching on your part or with PMs to individual users. And quoting big chunks like that clogs the thread.

As far as the Discs go they are only 720p, but still vastly superior to the official blu-rays. You won’t regret the the effort of getting them! 😃

I removed the photo links out of other’s quotes to shorten their quote. There isn’t any “search”. It would be easier if there were a search function on this forum. As instead of being able to do quick searches, I have to go through hundreds of pages and thus reading through all of that, I have made a few quotes/responses that go back to back instead of more spread out.

It’s not “spam”. I just found this thread and so far went through 30 pages over a few hours. So my 4 or so posts aren’t really anything when I’ve read others in this thread with 30+ posts. It’s just that I so far read through 30 pages in a short period of time, and so my quotes/response are back to back.

This forum is hard to read because so many different things are spread out over hundreds of pages. You have to read like 100 pages of a thread to try and piece some things together. I think on some topics the original poster should probably also edit their first post and add the extra info or links or whatever in there so all the new links/info/edits can also be found in the first post instead of only spread out across tens or hundreds of pages.

I’m sure njvc will get right on that because he has nothing better to do.

Yeah, I know what you mean. It can be like looking for the proverbial needle in a haystack sometimes! 😃

It’s too bad there isn’t a search built into OT.

One trick another user here taught me was how do a site specific search on google.

Yes, while that doesn’t always work, more often than not it does. I use it all the time to look for threads I have lost track of.

And FWIW, the whole reason there’s no search function at all is because the one that use to exist didn’t work. People endlessly complained, so Jay removed it.

A usable search function is on the list here:
http://originaltrilogy.com/topic/Suggestions-for-the-New-Forum/id/17749

I am slowly putting my Despecialized set together and am looking for these to round it out
THE EMPIRE STRIKES BACK: njvc’s Pulp Empire (BD25)
RETURN OF THE JEDI: TMBTM’s War of the Stars Parts I&II (DVD9)

Any help would be appreciated. Thanks

I’ve been skimming through this thread and I’m really sorry but I haven’t found a concrete answer to this question, but, how did njvc use tsmuxer to convert the video to import it into encore? How did he extract the audio tracks to swap them, and the original lossless video (before it was reencoded by encore) into the blu ray using multiAVCHD? I’m working on my own project to put the force awakens IMAX edition (by adywan) to blu ray. Thanks!

Which 50GB BD-R discs are the best for these? Or does it matter?

You always want HTL Blu-Ray discs. DO NOT GET “LTH” discs.

Sometimes you have to research if a certain disc is HTL as they don’t always advertise it.

But from my research, it seems the best discs come out of Japan. And apparently most discs are NOT made in Japan. I believe people at one time were saying Panasonic BD-R discs made in Japan were the best. But they seem hard to find and are expensive.

But I would suggestion looking at Verbatim DataLifePlus discs. As those discs should be higher quality i.e. less coasters, has a hard coating, and the data on the disc should survive longer i.e. it’s archival quality. Apparently data on discs can develop disc rot.

Another to look at are Digistor. I believe they only have one line of discs compared to Verbatim. They are HTL, hard disc coating, and are made in Japan. I bought a stack of 25GB and 50GB discs to use for my Star Wars Harmy burns, and also as an extra backup to burn all of my data files to. As even with external hard drives and flash memory to back up your data, those still have a risk of getting corrupted via a virus. Also burning every so often a copy of all of your computer files to a Blu-Ray disc will just give you an additional protection layer against data loss.

Dylanv1025, you might be able to find better information about that in the “How-To’s and Technical Discussions” section of the site.

Or you could try messaging adywan himself. Good luck!

Asked this a while ago, but I have (and prefer) the “A New Hope” version of Star Wars '77. Is there any way to have these blu rays but with that version? (my file is called ANH 2.7 edition iirc)