The show has now finished - after four superb seasons and with a proper & planned ending for it… so this thread will contain spoilers!)

The series follows Elliot, a young programmer working as a cyber-security engineer by day, and a vigilante hacker by night.

Mr. Robot is an American drama-thriller television series created by Sam Esmail. It stars Rami Malek as Elliot Alderson, a cybersecurity engineer and hacker who has social anxiety disorder and clinical depression. Elliot is recruited by an insurrectionary anarchist known as “Mr. Robot”, played by Christian Slater, to join a group of hacktivists called “fsociety”. The group aims to destroy all debt records by encrypting the financial data of the largest conglomerate in the world, E Corp…

Subversive, on-topic & fresh, biting social commentary, and a cynical viewpoint of the modern world - with the occasional insert of humour, warmth, redemption and a fair few WTF moments too 😃

Like many other absorbing modern tv shows… this is really beautifully put together; the cinematography, direction & style, feel, suspense, choice of music - the whole works; coming together to lift an already immersive series, with it’s quality acting and genius plot twists, into an even better, more captivating one.

Well worth a watch…

Some useful info sites… (be careful for spoilers)

Fantastic show. I urge anyone who gave up during the admittedly slow second season to give it another chance. Season three was really something special and paid off on a lot of the setups of the first two seasons in a very satisfying way.

Fantastic show. I urge anyone who gave up during the admittedly slow second season to give it another chance. Season three was really something special and paid off on a lot of the setups of the first two seasons in a very satisfying way.

Wait, this isn’t a thread for the Styx song “Mr. Roboto”? Lame.

Wait, this isn’t a thread for the Styx song “Mr. Roboto”? Lame.

i’m a lady who makes things

Fantastic show. I urge anyone who gave up during the admittedly slow second season to give it another chance.

That happened to me a few months back. It wasn’t that it was slow. It was a bad, protracted rehash of bits from season 1 - without the sense of direction or drive that the first season had. It was the entire “get on with it” package, basically.

Season 1 was great, often uniquely so. I might pick it up again at some point.

Season 3 most definitely “gets on with it.” I’d give it another chance for sure.

If this were another show I would’ve powered through without giving it much thought, but after some of the highs you get with Mr. Robot a clear reminder that it’s someone’s day job hit me pretty hard.

I’ll see if I can fit it into my Star Trek rewatch. I might wait for season 4 to be out, though.

‘Every consequence. Every key stroke. Everything has led to this. The final season of #MrRobot arrives in 2019. http://www.usanetwork.com/mrrobot/blog/mr-robot-season-4-announcement’ 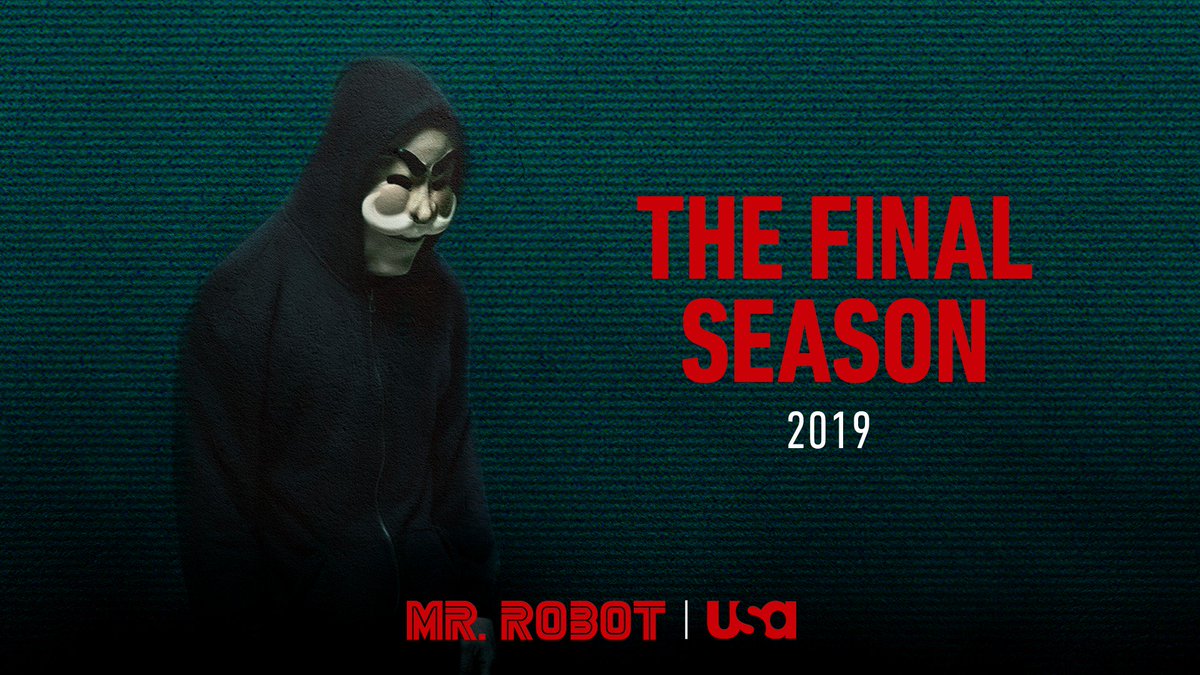 A shame that - though it could run for another 2-3 seasons quite easily (from the story perspective). Though at least it’ll go out on it’s own terms, and have a proper ending - which is denied for many other shows. Roll on 2019.

The creator has always said he had 4-5 seasons in mind but wasn’t sure which it would be. Sounds like he realized he had more than what season 4’s episode order was, but less than a full 5th season to go past thar, so he negotiated for an extended 4th season to end the show.

I’ll be sad to see it go, but as you say, happy that Esmail got to tell his story his way, right through to the end.

What a start to the last season! It just picked up where it where it left off depsite the long break. One of the few shows where I want another episode to air immediately afterwards.

As Chainsaw stated, very happy that Esmail gets to go out on his terms.

I’ve just finished watching the first season of this… woah! Some crazily engrossing events going on - the style, acting and pace really lift it, some episodes just flew by!

Hope it continues, and the show gets the worthy ending. Gonna have to try and binge on this and get up to speed.

Season 2 slows down a bit, but is necessary to set up for what comes after. Many consider season 2 to be the weakest season, but I think that came from week to week watching and it would play better in binge format.

Just thought I’d give you a heads up - don’t drop it in S2 if you think it got lost in the weeds, because I promise you it didn’t.

Thanks Ash, I am mid-way through S2 and still enjoying it.

Late to the party again, but from what I’ve seen in trailers and interviews recently, it looks good. Add in Jason’s review and I have to give it a look. With Baseball being over for the year, this may be where I jump in.

Just in time to watch the series finale with the rest of us around Christmas? 😉

Brilliant episodes this season! Many very talented people making this and interesting to see what do next.

I hope for ending as good as episodes so far, which have very different styles to each episode, but all are very high good quality and continue from one epsiode to next.

I feel the tension of characters and story around me when watching.

Yep. Easily in my top 5 all time TV series thanks to that excellent ending.