So on the Avid Facebook users group someone posted this image, noting the visible garbage matte around the Death Star II 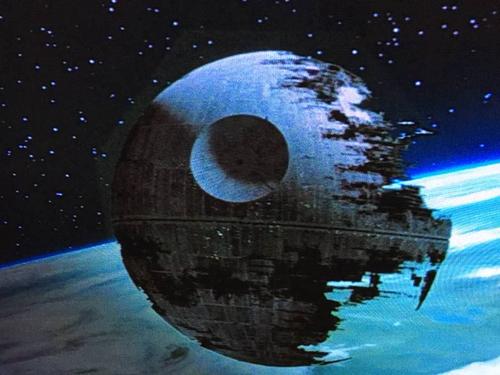 That got a response by Marc Wielage, colorist for 2004s Star Wars and Return of the Jedi releases

Marc has a podcast interview here at mixinglight.com (star wars talk starts at -27:00) where he discusses the film restoration process and a little bit about working on Star Wars. Notably he states that there are two rumours going around that are incorrect.

The first is that because of Georges tampering which goes back to 1999 [sic], the original elements are now damaged and respliced and ruined for ever and ever. That is not true. All the pieces still survive, the original negative pieces still exists. In a hand full of cases, maybe a dozen or two dozen cases, theres a frame or two missing because of splices, film splices, that were made. But those pieces can be reconstituted through various means so its not a lost cause, it is possible.

The second rumour thats out there is that George absolutely detests the original theatrical versions and doesn’t ever wants them out. And the truth of the matter is, number one he sold the studio […] its really Disneys decision now. George does not have a say in it.

The second things is I asked the people at ILM, I didn’t ask George, but I asked some of the other people, do you think it would be possible for us to do this? Is there any harm being doing this way and they said the only reason why we aren’t restoring the original theatrical version of star wars is because it would take too much time and money. And we don’t want to spend the time and money to do it so it’s really a logistics situation, it’s not a creative choice.

Also in George Lucas’s head, the only version of the movies that exist are the ones that are alive in his mind at that moment. So to him the 1977 version of Star Wars no longer exists, only what he sees matters. And its hard to argue with the guy who created all the characters, directed the movie, […] and also owns the copywrites.

And an awkward hello if Marc sees this thread.

Nice one - looking forward to listening to that - some intriguing info there too.

Very interesting stuff, thanks for that

Well, that explains a lot 😦

Thanks for posting the interview, was fascinating beyond just the Star Wars stuff.

That’s Vidiot from the Steve Hoffman forums, right? He’s had a ton of posts explaining/defending his work on the 2004 masters. They’re worth a read if you want some insight into the coloring process for the DVDs.

I still don’t buy Lucasfilm’s excuse that it’s a time and money thing. Haven’t there already been a few notable people in the industry who have offered to pay for a restoration?

I think it’s likely that Lucasfilm will restore the OOT once Disney’s buyout of Fox is complete since ANH will no longer be a factor.

Whether or not we ever see the ‘97 SE and the theatrical prequels restored is another story. In a world where we got five different cuts of Blade Runner spread across three separate discs, it seems pretty backwards to not at least include the original/‘97/“final” versions of each OT film.

I still don’t buy Lucasfilm’s excuse that it’s a time and money thing. Haven’t there already been a few notable people in the industry who have offered to pay for a restoration?

There were some offhand comments about people doing it “for free” or something like that, but unless someone offered (in a legally-binding, official document) to fund a restoration of the originals then I wouldn’t consider it a genuine or realistic offer.

Agreed. It’s one thing for someone to offer to waive their own fee, but does that mean they also are offering to cover ALL other costs?

[lt. maj. eyeroll said:]
the only reason why we aren’t restoring the original theatrical version of star wars is because it would take too much time and money. And we don’t want to spend the time and money to do it

The whole interview is interesting. It gives you a good sense of what goes on with restorations and color-timing throughout the last 30 years or so. I’m relived to hear that most of the original stock footage for the Star Wars films still exist, at least at the time of the 2002-2004 “Remaster”, that haven’t had the Special Edition changes. I’m sure one of the cases (Of stock footage) Marc talked about is the one Gareth Edwards found of the pilots he used to include into Rouge One.

I just hope that when the Disney/Fox deal gets finalized, well have a Official release of the Original Unaltered Star Wars Films some time within the next 5 years,

One day we will have properly restored versions of the Original Unaltered Trilogy (OUT); or 1977, 1980, 1983 Theatrical released versions; including Prequels. So that future generations can enjoy these historic films that changed cinema forever.

Lets hope that Disney restores them instead of continuing to do George’s dirty work.