Request: Is it possible to create a version of the TEAM NEGATIVE1 SILVER SCREEN EDITION V3 cover which hasn’t got the artwork distorted to fit into that shape? The Death Star and Vaders head look quite weird as it is. Is it possible to alter that or would it be too much trouble?
Somebody else mentioned it too, but I can’t get used to the ‘fully resorted’ part either - any chance of changing this to fully restored? Many thanks for all your great work!

So since a few other cover designers have their own threads, I decided I should make mine to prevent clutter in the main thread. All these designs are presented in order of release, and I will add new ones here as I create them.

Warning: These covers are not to be redistributed without my prior consent. Also, please do not create sets for sale using my designs. Because if I find out, I’ll have to file a lawsuit against you, and I don’t know how that’s going to work! Originally tailored for the Despecialized Editions. Supplanted by the later DVD iterations below - but still available here. The first versions of covers made with the idea of blending the Star Wars Trilogy with other cult films of the Arrow ilk. Note: The subtitle has since been changed to “Original Theatrical Version Reconstruction”. Available here. I’m not entirely sure that the information I’ve given the prequel covers would be relevant, given they’ll get a complete overhaul. 2 and 5 come in both black and white flavours, so you can have a chequered set or a half-and-half set. Available here. A combination of both the LaserDisc and Executor VHS Definitive Collections. Available here. When the Respecialized Edition came out, a double pack of the two Harmy reconstructions was invariable. An additional cover was made for ESB, but Adywan’s 14GB 97SE MKV rendered it redundant. The first is still available on request. I know Moth3r did them before, but I couldn’t resist… anyway, I wanted to see if I could based on the limited resources I have! May possibly revisit later to convert to Criterion/PS4 size. Available here.

A significant improvement over the original BD versions, notably replicating the colour schemes of the original VHS covers. Available here. A largely experimental prototype of a potential slipcover. Ran into a number of problems making it - for starters, I wasted paper trying to line up the double-sided cover correctly. I also tried using photo paper for the slipcover itself, but it’s a little… sticky. Somehow though, it worked. Unfortunately, this cover is not available at this time. Experimenting with the teal/orange colouration that Angel’s edit is noted for. Unavailable at this time. These follow in the vein of the Star Trek Remastered DVDs. Unfinished; will later be supplanted by Blu-ray versions. Produced as a tideover until ROTJ 2.0. The discs are all Tom Jung poster art. This cover comes in Criterion/PS4 size to differentiate it from the BDs. Available on request.

Something I made while I was in a sort of phase of making Criterion covers. Unavailable at this time. In commemoration of Team Negative-1’s release. Available here. A reissue is anticipated with further details on whatever the BD ISO contains.

I sure hope you have the time and are maybe planning on completing the Criterion Collection that you started. That cover is crazy good looking. How awesome would it be to have those covers with Harmy’s blu rays (Njvc’s editions maybe)? It would be a dream.

Just chiming in to say that the Arrow “White Box” Blu-rays with the Reversible sleeves has updated njvc options. It does mean I have to up the certificates to 15, since the latest BDs have the Family Guy Trilogy on them. In turn, it’s kind of a call-back to the original Episode I DVD release, where the film itself was rated U, but the special features bumped the DVD rating up to PG.

I think it will complete the 35mm scan collection and it would be really nice.

Also, there’s a typo in the Executor cover of The Empire Strikes Back saying that it has the Original “TheatUical” Trailers.

I think it will be very easy for you to correct the typs, especially since the Executor cover is my favorite out of all of them.

I am not being harsh towards your work since I really love your work here and love all your covers, in fact, your covers in general (especially the Executor set) are my number one favorite, number two being phildesfr’s Blu-ray covers number three being vigothcarpathian’s version, number four being ronwilm’s box set, and number five being doublex776’s Faces covers.

P.S: Can you also do disc art for the Executor sets? I think they would be really great.

These covers are awesome! Especially like the Arrow White Box ones 😃

Thanks for sharing these!

Here comes a new one: I liked the look of those junior novel covers they have in the library. So I did one based off that. The gimmick is that each film has their own coloured case. 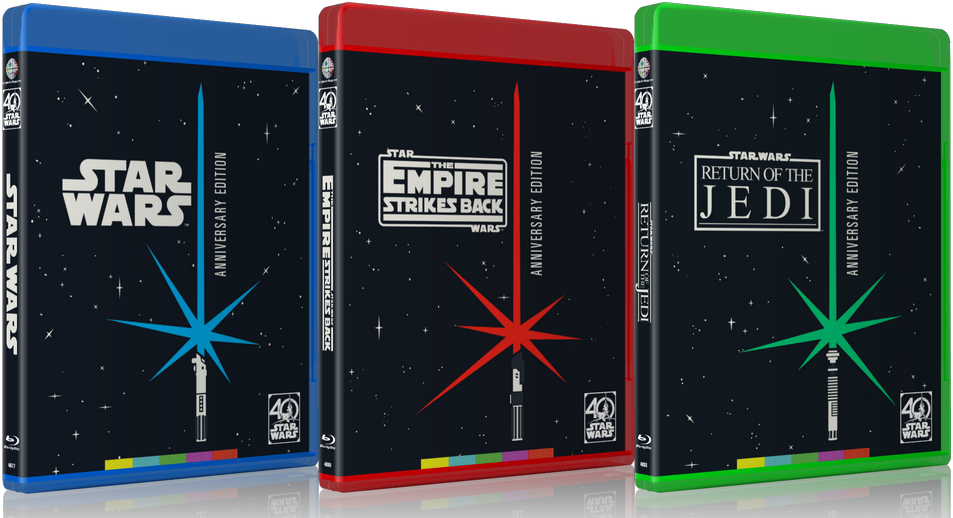 Here comes a new one: I liked the look of those junior novel covers they have in the library. So I did one based off that. The gimmick is that each film has their own coloured case.

I like those a lot - especially the different coloured cases for each too - though what do you mean ‘junior novels’? 😉

My Star Wars novel came in a cracking Star Wars tin (and erm… a doodle book). The tin’ll be housing some old SW dvds soon enough 😃

TLJ is a bit tricky as Anakin’s saber is the only one featured aside from Kylo’s. I say repurpose Anakin’s saber but have it reflect the first TLJ poster where the bottom is blue and transitions to red as you go up the blade.

TFA will be easy, since Egmont have a cover for that too. The others might be a bit more difficult though.

Though not quite within the criteria of DVD or BD, these are also added for completion. Initially produced as an experimentation with the jewel case format, these are designed around the 2000 VCD covers. The back details for ESB and ROTJ may prove incorrect. A hypothetical replica of what the cover for the Magnetic release of Star Wars would’ve looked like had they been granted the rights to it before 1982. Hey… without Magnetic, we wouldn’t have home video. Based on the original F48 Ken Films box. It also experiments with the way some VCD covers use the back of the case as the front of the cover (like the San Andreas one, for example), which is actually rather nifty.

Can I please have the Revisited jewel case covers, please?
Thanks in advance!

Hey there, could I please get the link for the Arrow “full size” AVCHDS Star Wars Trilogy cover?

Could I get the Revisited 2000 VHS covers with the US/CAN ratings?