We are digging into this way too much. If Rey offers Ben the lightsaber, he could accept it or refuse it. Either way would have the same meaning: that he has been redeemed, and is either worthy or Rey is worthy.

I disagree. I think redemption should not be so easy. Just say you’re sorry for the death of millions, and you get your lightsaber back as if nothing has happened. In my view Ben Solo should take responsibility for his actions, if he lives.

Regardless of what ends up happening in IX, I do know we’ll be having interesting conversations regarding his death or redemption! I’m sure a lot of it is going to boil down to its execution, whether people will be satisfied with the conclusion of his arc or not.

I tend to agree with Dre here (and we’re not even digging that deep honestly, except maybe insofar as we’re debating a hypothetical). But RL’s right, it comes down to execution, and how it plays out could invoke different meaning than what one might assume on paper.

Also good to get some more evidence on what I think a lot of us have speculated, that IX will have its title/teaser reveal at Celebration.

I just hope that if Rey has already built up the new jedi order again or if she finds some of Luke’s old students, that they show that they aren’t the same as the Jedi from before Order 66. My biggest question as to why Luke was bashing the Jedi was because he should’ve already fixed the problem. The Jedi clearly had a problem, and Luke clearly defied Yoda and Obi-Wan’s wishes by not conforming to their beliefs in ROTJ. Why would he bring back the jedi order, not change the teachings, then blame the Jedi for their ways after they’re all killed off again. That seems like a “no duh” situation.

I think that’s a big factor for why people think Ben Solo will be redeemed; so far we’re told that he was in the exact same situation as Anakin was. If Ben still turned despite Luke changing the jedi ways, then I feel there would be a significant drop in redemption believers. Not saying it’s a bad thing to think that, but that’s just how I see it.

To the surprise of no-one… 😉

‘This is the panel you’ve been waiting for! Don’t miss the Star Wars: Episode IX panel with director @jjabrams at #StarWarsCelebration Chicago! Want Friday tickets? Use, LYTE, our official ticket exchange website’

I imagine we’ll be getting a title for Episode IX during this - and maybe some sort of teaser trailer.

What would be truly impressive is if they managed to keep a lid on the title until it appears at the end of the trailer.

Only one way to keep the lid on that long. 😉

Avengers pulled it off. Would be great if Star Wars did the same.

Avengers pulled it off. Would be great if Star Wars did the same.

We’re at the midpoint of March, I believe that Lucasfilm is revealing the title the same way Marvel did. 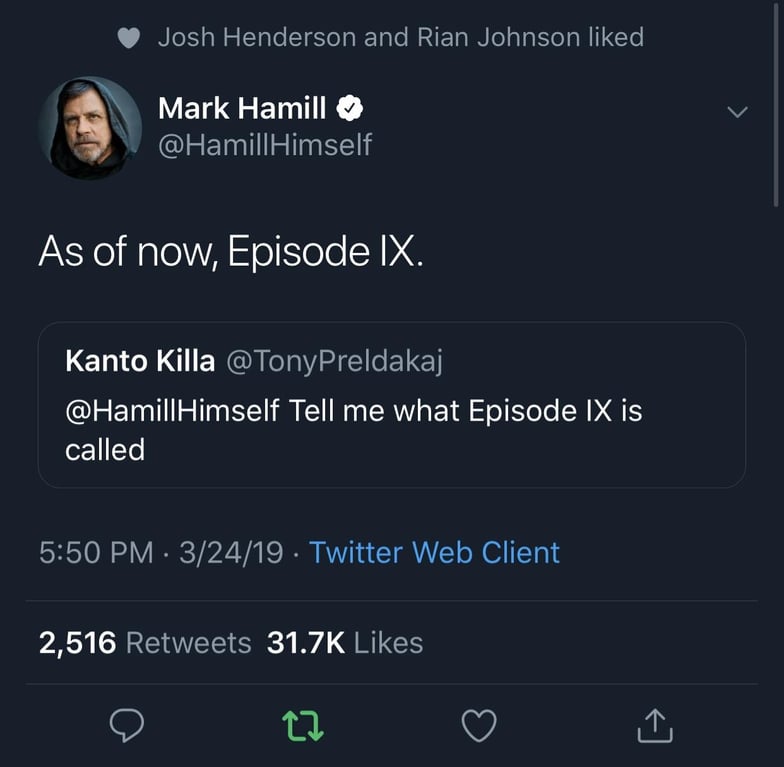 I still love his dad joke.

^ Quality as usual from Mr Hamster 😃 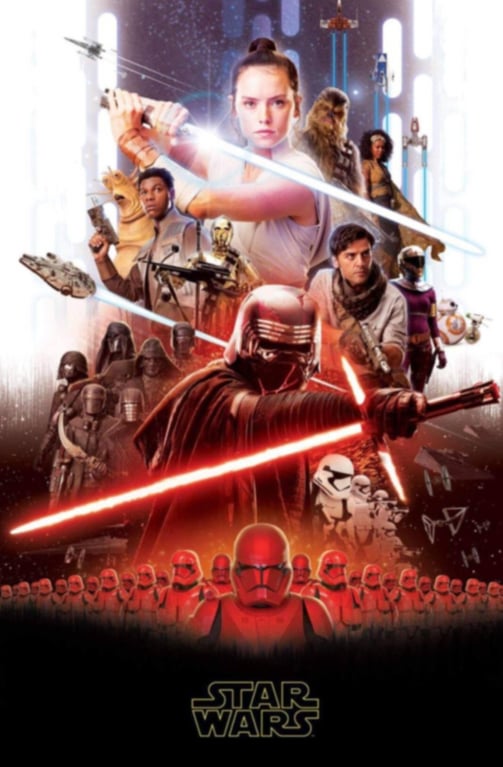 EDIT: beaten to it.

Not too sure about this guy/girl…

Though as other others have pointed out… no title still, no Leia or R2? 3PO packing heat?

^ Quality as usual from Mr Hamster 😃

OMG Chewebacka he looks so different 😃

If they have Threepio deliberately firing a weapon, I’m going to vom.

EDIT: beaten to it.

If this poster is legit, it seems (at least from what we can make out from this poster), that we’re sadly still mostly recycling classic ship designs. The Knights of Ren look cool though… C-3PO with Chewie’s weaponary might suggest we’ll be saying goodbye to another classic character.

C-3PO with Chewie’s weaponary might suggest we’ll be saying goodbye to another classic character.

With our nervous friend C-3PO wielding a bowcaster, we could be saying goodbye to any number of characters 😉

C-3PO with Chewie’s weaponary might suggest we’ll be saying goodbye to another classic character.

With our nervous friend C-3PO wielding a bowcaster, we could be saying goodbye to any number of characters 😉

The poster does look quite legit, but it’s possible it could be fake too, or it could be test artwork.

If it’s a fake it’s an extremely convincing fake.

I agree. I do hope that C-3PO doesn’t weird Chewie’s bowcaster. It reminds me bit of R2-D2 flying. I also personally hope Kylo Ren doesn’t wear his mask again. To me it would be an act of him, as a character, maturing backwards.

It could be one of many legit posters for IX - though possibly just not the main official poster?

Nice to see the Knights of Ren again.