I wish - we need more time with these characters - but like rogueleader said, there marketing is clearly showing it as “the end”.

Until the SST in 10 years, of course.

I wish - we need more time with these characters - but like rogueleader said, there marketing is clearly showing it as “the end”.

Until the SST in 10 years, of course.

I’m ready for it to be over. Plus I don’t think the ST has earned a two-part finale. Episode VIII already had a finality to it, not leaving too many loose ends. I think it would be the height of egotism for J.J. and Lucasfilm to decide that the final chapter (which plot-wise starts basically from scratch) is worthy of two films.

I don’t see why the marketing couldn’t be a trick to be subverted later when the name of the game with these episodes has been ultimate secrecy and surprise, Lucasfilm could pull the rug out from under people if they wanted. There are ancient interviews out there before the idea of 9 became so accepted where Star Wars could be up to 12 parts in total. With the standalone entries going to streaming I think this is one of the few moves left to genuinely surprise anyone when it comes to the episodes while keeping the ball up in the theatrical department. I also don’t buy even the RJ and DnD trilogies (which I predict will merge if they don’t fizzle out) as being so separated from the rest of the saga, it just doesn’t make sense and could go down in flames with audiences who don’t have the patience or the interest in trying to endear themselves to totally new sets of characters going on adventures in random disconnected time periods.

Anyway that’s my case, I agree that realistically they wouldn’t go there, maybe 0.005% chance, but I would sure consider it if I were in their position and bite the bullet on any ego indulgence and just say it’s the last hurrah before anyone notices the last minute scramble to figure out how to end this story. It’s bad enough we really haven’t had the proper time with the characters, hollow mysteries have substituted for story and it’s not a good look when you’re two acts deep and your main character’s defining arc is “Who am I? Why am I here?”. ST is really mostly Kylo if we’re talking about a set up narrative we can follow and respond to, the heroes have participated but those moments where we learn about them have been brushed to the side for later and now I don’t know how 3 hours will be enough to wrap up what has barely been established.

It is supposed to be a very long film so I don’t think there is a need to break it apart.

The Star Wars Show ‘We’re Heading To D23 Expo!’ says we’ll be going behind the scenes to get a glimpse of TROS at D23 on Saturday 24th at 10am.

There is also D23 content mentioned for Vader Immortal II, The Mandalorian, Star Wars Disney Parks Panel, and some content for the younger Star Wars fans too.

That matches exactly what was described at the shareholders meeting (I think) earlier this year. Very interesting!

Was that a Blockade Runner or some other ship?

Blockade Runner I believe. You can actually see one in one of the stills they showed at Celebration. 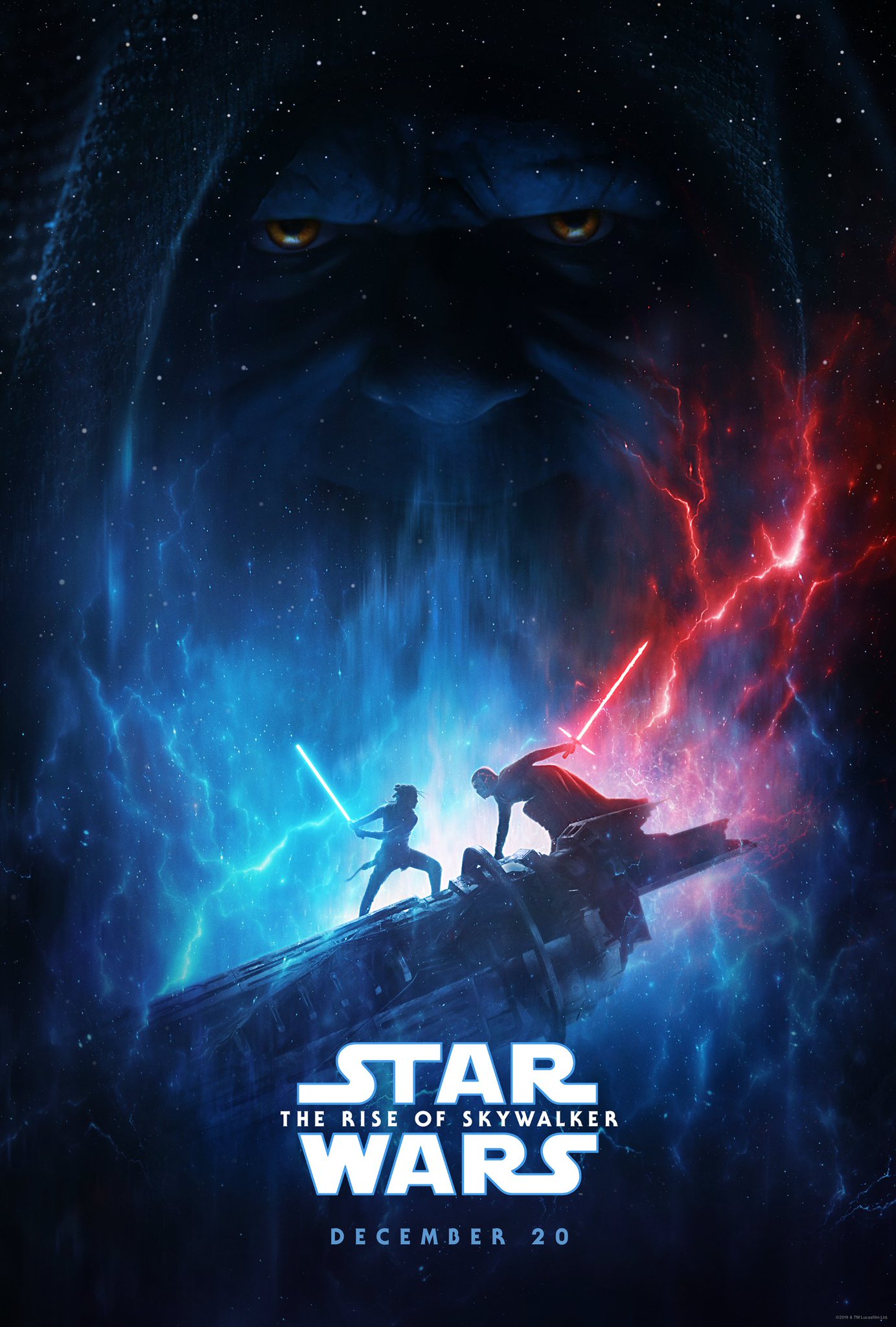 Wow! Pardon my language, but holy shit! I did not expect an official poster like this to be revealed.

I didn’t, but I could try to describe some of it. There were a bunch of shots of Rey, Finn, and Poe standing. There was a shot of what looked to be a Tantive IV ship. And Vader’s helmet is back (Kylo was standing next to it).

It is official, and at least to my eyes it looks pretty cool.

Go ahead and save the footage before it gets removed, then you can delete it this December.

I’m still skeptical of Palpatine’s involvement in this, but we’ll see what happens.
I think he looks cartoony on this poster, though I wonder if he may be physically embodied differently in the film than in ROTJ, and if this is splitting the difference in order not to tip us off.
Is it the main poster, or a teaser?

Teaser I believe. Main poster will likely come around October with the full trailer.

Official enough to make the wikipedia, makes sense with what has been introduced in the actual teaser so far, probably one of many posters which I expect will have less palpatine emphasis.

I expect the final posters will be more in line with “leaked” artwork that had all the characters and a bunch of Sith Troopers lined up.

No one talking about Rey with the red double-bladed lightsaber?

What was the source for that?

Official enough to make the wikipedia, makes sense with what has been introduced in the actual teaser so far, probably one of many posters which I expect will have less palpatine emphasis.

What was the source for that?

When wondering if something’s official or not, never a bad idea to check starwars.com 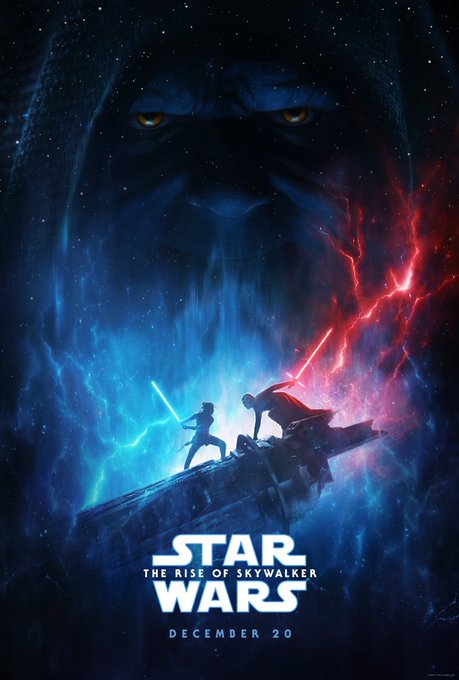 That is one sweet and tantalising teaser poster ❤️

Someone has knocked up a ‘motion version’ gif of it too, here:-

and “D23 ‘The Rise Of Skywalker’ Footage To Debut Monday, Description Available Now - http://www.starwarsunderworld.com/2019/08/d23-rise-of-skywalker-footage-to-debut.html” - https://twitter.com/TheSWU (re the 2nd TROS reel)

It can also be found here mate (the 1st IX reel; only l0 seconds long, from someone’s mobile phone):-

Rotten Tomatoes, Cinemablend, and John Campea are some of the few people who tweeted about seeing it at the panel, and yeah I believe starwars.com mentioned it.