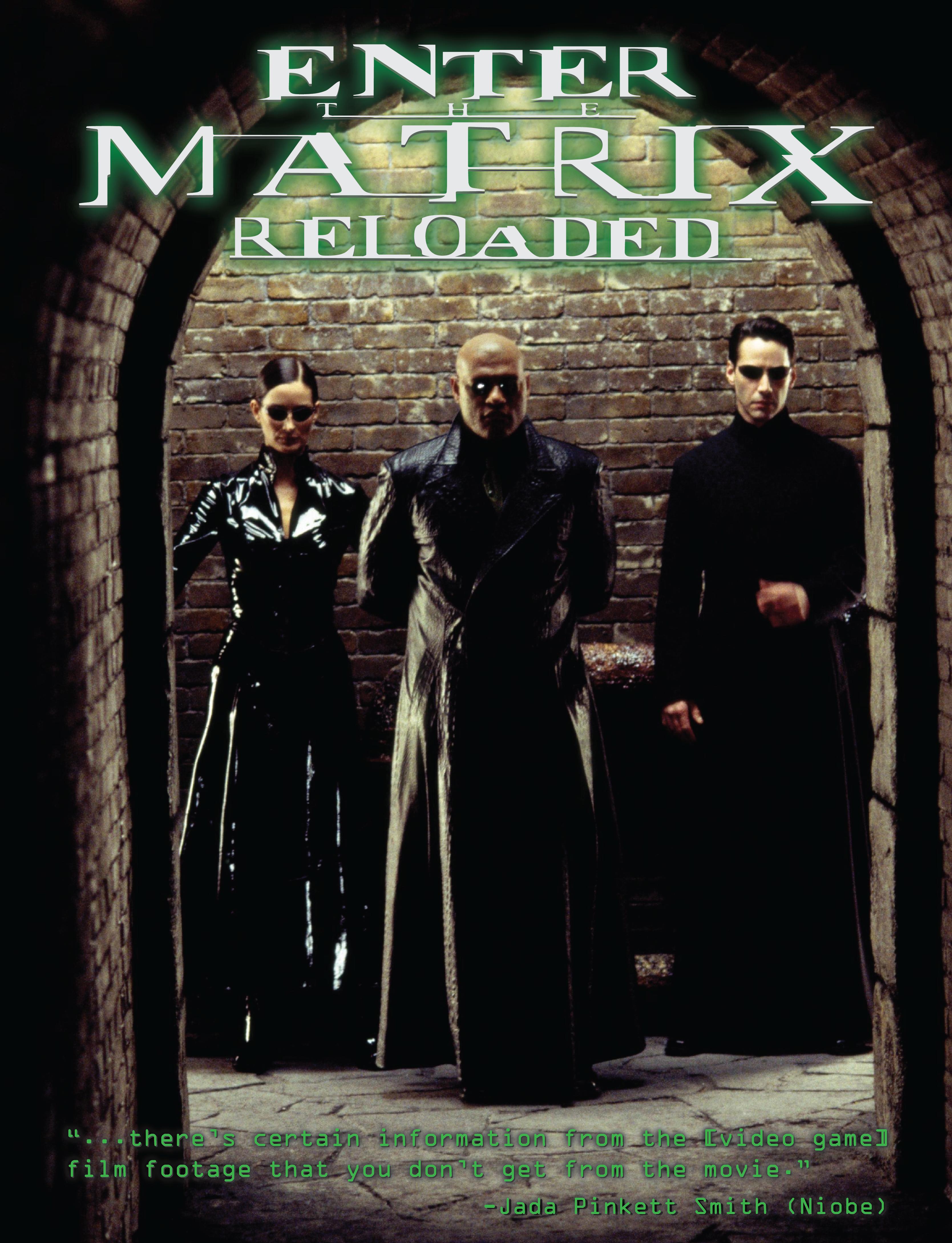 Hi everyone, I am excited to announce that I have completed an extended cut of The Matrix Reloaded using most of the filmed footage from the video game, Enter the Matrix. This adds in the story Niobe, Ghost, and Sparks (which was a somewhat minor part in Reloaded). I think this makes the narrative of Reloaded more complete.

V2 OUT NOW! V1 was more of a proof of concept. This is much more refined!

*This edit is still in 720p to let the added scenes fit in better, but a 1080p version could be rendered out in the future as the upscaling did a pretty great job.

Color grading examples (it looks drastic, but matches the new color grading from the remaster quite well): https://imgur.com/a/dM45Jv9

Enter the Matrix material cut from v1 for pacing/logic:
The full “Niobe and Ghost join the meeting in the Matrix” scene.
Sparks reacting to the incoming agents.
Lessons of the Oracle scene.
Niobe’s line “You ain’t done yet.”
Sparks warns Ghost and Niobe before they get hit.
Sparks says “Oh I can’t watch this” then proceeds to stare at his monitor before the two semi trucks collide.
“Picnicking Sentinels” are coming for the Logos (the way the scenes have been restructured to flow better in this version leaves no room for this scene).
Removed the post-credit scene of Ghost and Niobe discussing if anyone will find them since the “Picnicking Sentinels” scene is scrapped.

Bonus Material:
The complete Enter the Matrix scene collection with AI upscaling and 5.1 surround enhancements (sans color grading).
Full 2003 Charlie Rose interview with the Matrix cast and producers discussing the film (I enjoyed this interview a lot and figured more Matrix fans should check it out).

Hello, good sir! I’ve been waiting for this movie since I first played Enter The Matrix… I own that one and all the Matrix Films, I would love a link to see Enter the Matrix Reloaded, please. I jsut read all the added scenes, good work!

I remember those scenes from Enter the Matrix and I was always curious how they would look like in the theatrical movie (let’s say something like The Clone Wars and the Star Wars Prequels), it would be just epic to relive those old memories.

I congratulate you for reviving this saga and its extra material that were exclusive: the Atari’s video game and Animatrix.

I would like to take a look at your great work, I hope you could share your edition, which will surely be unforgettable.

Wow, long time since I’ve sat through rebloated. Yeah little rough in spots, don’t know if that’s due to creative choices or glitchy rendering. But fascinating and fun exploration of the more expanded storyline they left out of the final film. I actually understood wtf was going on as I watched it this time instead of being baffled totally. There’s real gold left in the Enter the Matrix game and it helps the story make more sense and feel more complete. Definitely very close to being the definitive way to watch rebloated. A few highlights from this particular cut for me as a fan were the events before Niobe and ghost go to save morpheus on the free way. I like how they feel like they’re part of the chase not this out of the butt last minute element, so the slow mo shoot part works as sort of nice bridge between the seperate storylines rather than gratuitous slow mo for no reason. Now it says “these guys are in deep shit.” Punctuating Niobe and Ghost’s haste to get moving. Overall Jada gets better as a character in this cut now that she’s more fleshed out. I paid more attention to her character and gave a crap about her as I watched this, which I didn’t in the least as I sat through the theatrical movies. Of course the Oracle is a difficult bit to get right since the original actress didn’t have anything to do with the game so they used the second actress. It’s a tricky thing to fix or attempt to do… Very cool extended cut to accompany the regular films, it’s kinda like Lion King and a 1/2… Don’t pass this up, it’s worth taking a look at the story from a new angle.

He big in nothing important in good elephant.


Dude, defo need the link! I’ve been meaning to make this film since the game but you know…lazy
Definitely intrested in seeing someone else’s idea of what would and wouldn’t get used.

Ooh… I definitely would like to get a link to this. I used to love playing Enter the Matrix back in the day and it would be real neat to see the IRL footage intertwined with the Reloaded movie.

If you don’t know how to PM someone on here… you can always take the time to look around and make the effort to find out. 👍

These may be of some help:-

Welcome to the OriginalTrilogy.com; Introduce yourself in here + useful info within

‘How do I do this?’ on the OriginalTrilogy.com; some info & answers + member FAQs

Long time no see. I’ve been taking a break from the forums (and still sort of am), but I wanted to share my newest version of this edit in preparation for Resurrections!

I stumbled on an AI upscaled version of the Enter the Matrix scenes on another forum that I’m a part of and thought I’d take another stab at this fanedit. V1 was very rough, but I learned a lot since then and this edit is far more technically sound (I’m especially proud of the color grading I did for the added scenes) and is overall a better paced edit.

I updated the initial post to include everything that was changed for v2…which is a lot. I’ll be replying to old pms asking for links to this edit, but just in case I miss one of you, just reach out and I’ll send a link.

Thanks for everyone’s interest in this project!
-Josh

I cannot wait to see this. New to the forum so how does this work?

I would also like a link sent to me in the form of a PM from someone who has and is willing to share this, please.