20 episodes have been compressed now, slowly getting shorter between each episode from all the 1 hour episodes being done first.

30 episodes have now been compressed.

40 episodes have now been compressed.

50 episodes have now been compressed, so I’m now halfway in it.

60 episodes have now been compressed. Looking at how its going now, I may be able to have all episodes compressed before the end of the year.

It certainly seems to be picking up speed - queuing them by runtime seems to have been the way to go!

Yeah. Good thing too as I’ve had to halt it a few times when having another CPU-intensive thing running, didn’t think I would finish before the end of year. Wish I had a 2nd PC solely for rendering and other background things.

70 episodes have now been compressed. Had to stop encoding for a few days but should still make it before end of year.

80 episodes have now been compressed, still on track. Ideally a Christmas release would be the best but have to see if the rest can fit in before then.

90 episodes have now been compressed, so only one more update till release. 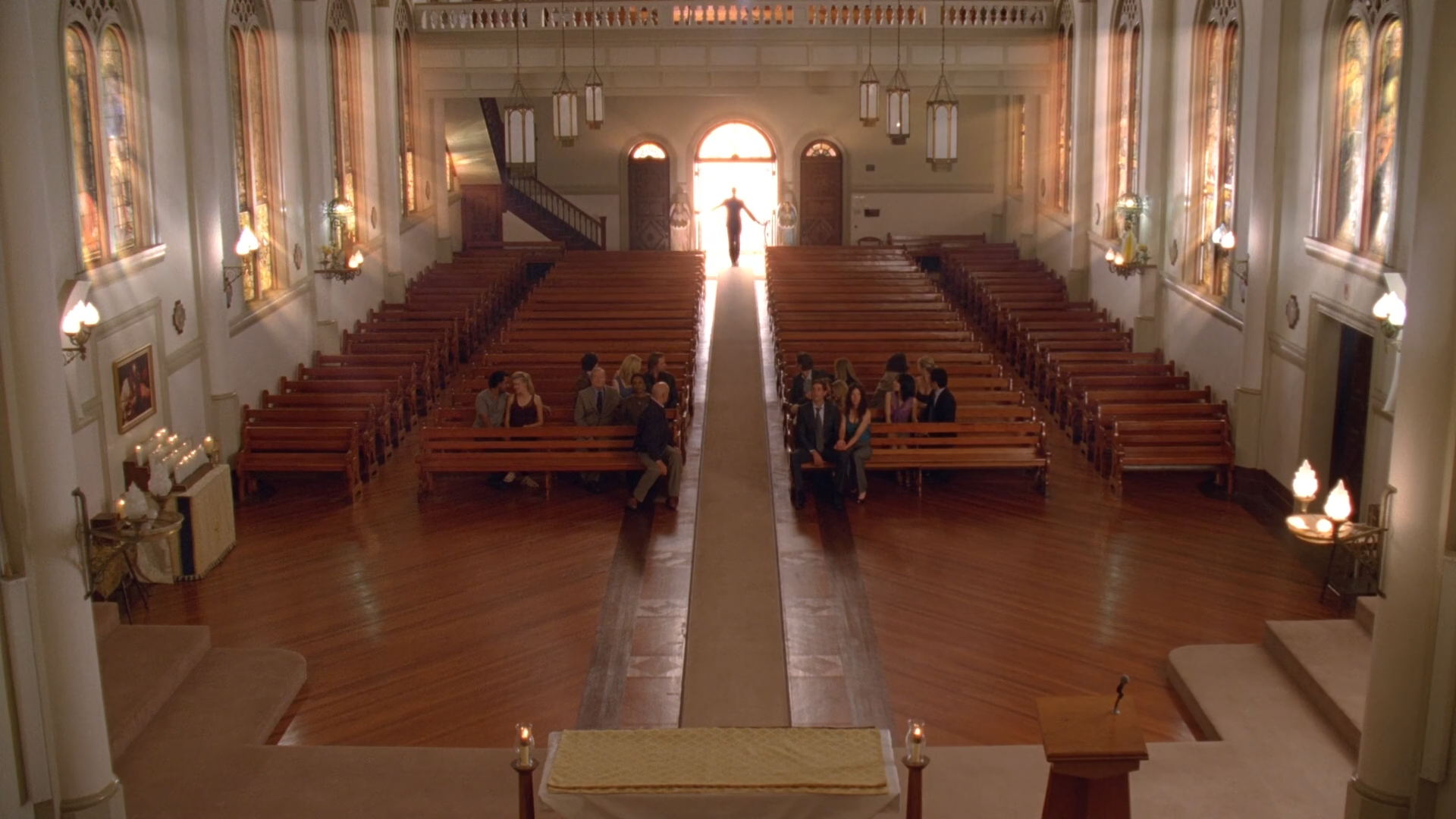 The x265 version is now finished…just in time for Christmas.

Here’s the size difference between the original x264 and x265 versions: 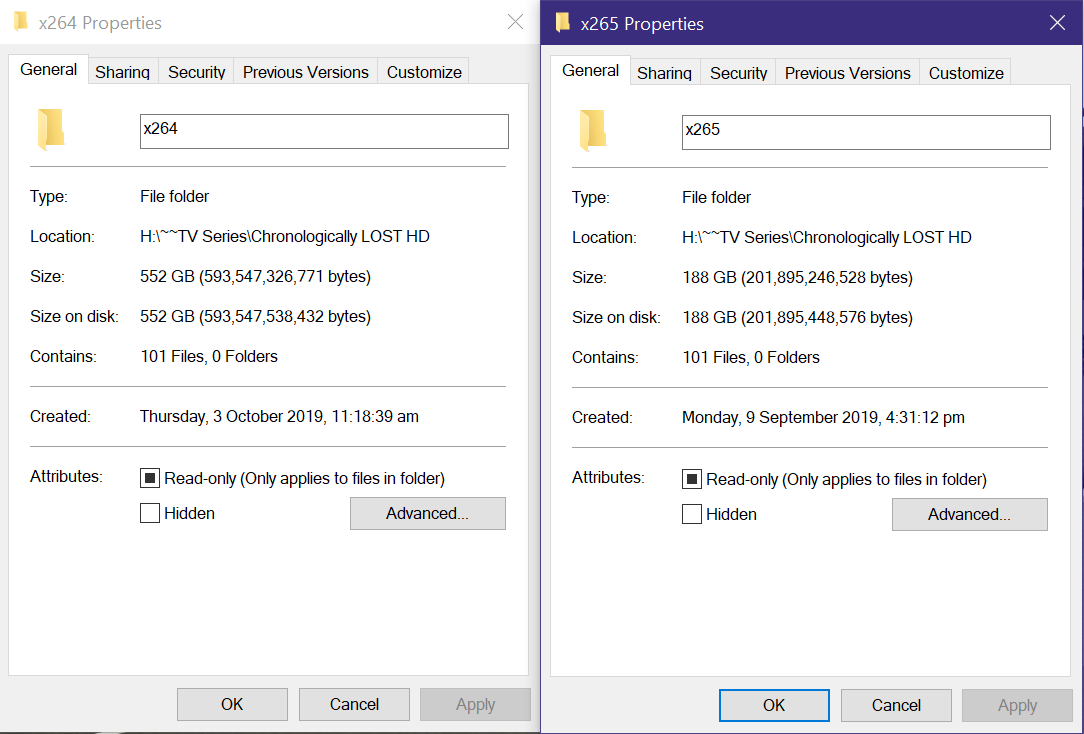 Looking at that and how the quality is near identical between both, also how the subtitles in the x264 containers aren’t the updated ones that have been added into the x265 one, I’m considering whether to keep the x264 version up and make just the x265 version available, no idea if there’d be anyone who would care that much to have the bigger release.

I’m gonna reply to all the past PMs with the updated link but feel free to PM me if you haven’t previously.

That is some sterling work on this project, Sir! Well in 😃

Gonna be deleting the x264 version after New Years, so if you were (somehow) wanting it, just let me know.

Have PM’d for a copy.

Is this perfectly chronological? I.e., does it start with our characters on the island after they time travelled there?

At the time the original Chronologically Lost came out, there was another edit called Lost Chrono, I think, which wasn’t so much in chronological order as CAUSOLOGICAL order. That is, all flashbacks and on-island-pre-crash scenes came first, then the crash and island scenes up to the time travel part, THEN the time travel part, then the return to the present. For me that always felt more natural, because you’re getting the full story from the perspective of all of the characters.

For example one of the earliest scenes was with young Ben, where he gets shot (I think by time-travelling Sayid). So originally we saw young Ben, then him getting shot (but not by whom), then the story played out for a long time, we met Sayid, eventually he time travelled, and then when he shot Ben that whole scene played out.

This edit aside from minor edits and changes, is the same as the Chronologically LOST edit that’s been around for a while, just rebuilt using the Blu-ray set. So this starts from the birth of Jacob & MiB to the Island events in 2007 and has the Flash-sideway events all together in an Epilogue set.

I’ve never watched Lost Chrono, only got told about it, it did differ from it, think it was supposed to be less literal Chronological wise, though the only major change I remember is that the time Desmond went back to after turning the key was placed between the 90s events rather than inbetween the key turn and sky turning purple in this edit.

Speaking of Lost Chrono - if anyone manages to find an upload of it anywhere, please shoot me a PM! I’ve been looking for it for years, to no avail…

I think I may know someone who has it, saw them post a magnet link in a Reddit a month ago. Looks to be inactive though, DMed them in case they have it somewhere else.

I found a version a while back that the link poster claimed was Lost Chrono, but it was just a more amateurish version of strict chronological order like Chronologically Lost is.

I suppose it’s possible that Lost Chrono being in “causological” order (thanks for that term, EddieDean!) is a rumor that was never true and the copy I found years back was Lost Chrono…

Yeah, I don’t know if I ever actually watched Lost Chrono. It may be an unrealised idea. I used to have a spreadsheet putting it all in causological order but I can’t find it now!

Sadly the GDrive upload for this is currently having a Download quota exceeded message, so it can’t be downloaded right now, didn’t think it’d reach it that quick being via private message (or unless someone shared the link to a public place which I hope wasn’t the case). No idea how long it’s gonna do it for though, been a few days already. If it persists much longer, may have to look into Mega or somewhere else anyone can recommend for a reupload.

Just PMed you - hopefully you’re no longer having download issues! 😃

Saw that. Doesn’t seem to be an issue right now thankfully.

Hi I just made an account specifically for this, can I get the links? I’m really excited for it!

Hello! So excited to see the videos. Please email me the links when you can!