For those in the UK - https://www.youtube.com/watch?v=FUGYXELKPTw

So… Frakes just tweeted a trombone - doesn’t seem like it’s a stock photo, either - and Brent Spiner was the first to react to that. And it felt kinda nice considering the possibility for a second. I guess there may be gold in them there (TNG) hills, still. For me, anyway.

I might need to brace myself for serious disappointment while the rational part of my brain is in control pre-media blitz.

Would be nice to see the USS Titan on screen.

This would be the time to stop ‘fixing’ the universe and just embrace what’s already there. Captain Riker is the way to go in terms of fan service. Random tribbles and Gorn skeletons are not.

And he definitely should play Night Bird 😃

Do you think Riker ever asked the Bynars if he could get a copy of the Minuet program? 😛

And random Tribbles are nothing new. 😉

I’ve been re-watching the movies lately, and my copy of The Undiscovered Country has vanished. I’m starting to question if I actually had a DVD copy at all. The Laserdisc will have to do if it doesn’t turn up.

Which one do (or potentially did) you have? I made a point of buying the original DVD release because it was the same version as my widescreen VHS. Although it’s non-anamorphic, I wasn’t interested in the 2004 SE DVD because of the alterations and revised aspect ratio. I think it was the double disc edition, as I was slowly buying them as they went on sale many years ago. The Laserdisc may have the mattes opened up slightly. It was one of the “test” THX mastered titles before the first official THX LD releases though.

Does the Blu-Ray retain the changes?

The Blu-ray features the theatrical version, the analogue releases and the original DVD contain the extended cut and the 2004 SE double disc edition introduces further changes, including to the aspect ratio.

Well, if the Blu-Ray isn’t slathered with DNR, maybe that’s the way to go?

A cool website devoted to the Trek spinoff that never was, but may yet be?
http://supervisor194.com/

Very cool! That would have - and could be a very exciting spin-off. Imagine the potential for Trek cameos?

These are the kinds of ideas that I wish Rick Berman had pursued instead of Enterprise.

Speaking of which, this was a missed opportunity but as was pointed out in the comments section, it could be possible today with both Takei and Cho.

Do you think Riker ever asked the Bynars if he could get a copy of the Minuet program? 😛

It’s more than likely it was his priority number one.

And random Tribbles are nothing new. 😉

A cool website devoted to the Trek spinoff that never was, but may yet be?
http://supervisor194.com/

Are there any recent rumours? This would’ve had to be a 60s show, so that boat sailed a long time ago. And Robert Lansing put the final nail in the coffin in the 90s, so to speak.

Here’s a better site, though:

It’s pretty amazing that not only there’s multiple sites dedicated to AE, but that someone’s still interested in making them now.

No recent rumors I know of. It just seems a waste not to revisit the idea in some form. They could do it retro 60’s style and recast. Every time I see Trek IV, I think it would have been lovely to have had Robert Lansing in a cameo, quietly observing Kirk and Spock in the background somewhere, but not revealing himself.

I’m also a fan of Roddenberry’s Spectre which has sadly never even been on video.

I think it was mainly a case of someone with sufficient access putting some time into this particular investigation. But the time factor does make it pleasantly dramatic 😉

It’s crazy we still don’t know who played parts recurring as many as twelve times on the show. That said, I’m waiting for Larry to dig up some info on the Rigel ladies from Shore Leave next. Lieutenant Bobby can be third 😃

Is it possible to be so oblivious of Trek these days that someone who had a bit part on the show doesn’t realize there’s money to be made signing photos at cons? Provided they’re still around of course…

Could be that - to an extent - this smells like a really thankless job. If you’re Shatner and have alimonies to take care of, there’s money to be made, sure, but if you’re an uncredited (even if recurring) extra, you’re barely a curiosity. Might not be worth the hike if you’re not gung-ho on cashing in on your acting gig that never really worked out.

So… I could see someone making this decision while fully aware of what Star Trek is.

Really interesting interview, would recommend if you’re interested in the whole fan film mess Star Trek is in.

I was thinking about the TOS episode This Side of Paradise for some reason, and was pondering what would have happened if Kirk hadn’t overcome the spores, and gotten Spock super pissed off at him. The Enterprise would still be in orbit for some time, long enough to be considered overdue and another ship dispatched to look for her. If that ship’s crew fell prey to the spores, and yet another ship follows up, eventually you have a lot of Starfleet crews crowding the colony and a lot of empty ships in orbit? 😛

Chabon is running Picard, uh, starting now? Will run soon? Has already been? Does it even matter?

New art & teaser trailer for ‘Picard’ (along with some info)…

‘Star Trek: Picard will stream exclusively on Amazon Prime Video in more than 200 countries and territories outside of the U.S. and Canada.’ 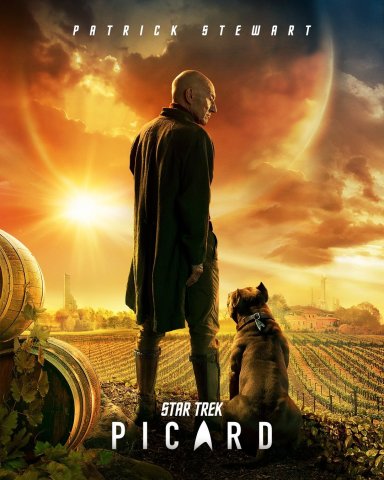 Here’s an alternate link that should be viewable internationally.

Considering how The Burnham-centric the universe in Discovery is, part of me fears this new human macguffin will somehow be related to her. We dodged the Borg bullet once, and this time they rolled out a Borg cannon. Not sure how I feel about that, but I think I’m leaning towards “must we?”

It’s painfully evident they still have no clue how to run a peak TV version of Star Trek if the trailer is any indication. In terms of the writers learning the ropes we’re still at the rough equivalent of TNG season 1, i.e. they seem to be copying a template that has worked elsewhere with little regard to the unique qualities of Trek that need to be adapted for whatever their new approach to storytelling is. This becomes an issue in the context of a show like Picard even more so than in the case of a misfire like Discovery.

I want to be very, completely wrong…

In Sir Patrick we trust…

From what I hear last time that happened we got Picard: Action Man 😉