I think the castle-in-background is fine. It’d look about the same above the base: 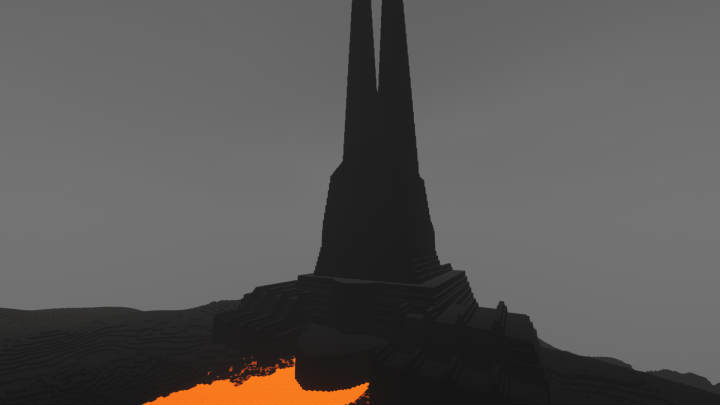 I feel it felt more natural having the TIEs coming from space and flying towards the camera, no? i.e. coming in from high to low then cut to flyover.

I do agree with MR. If you consider the space shot before this one and the forest shot after it, we’d have three consecutive shots of TIEs flying away from camera.

@Burbin, what does the back of the castle look like? Has it ever been shown?

It is shown from the back when Krennic lands on Rogue One, though it’s not shown entirely. Taking another look at MR’s shot:
https://drive.google.com/file/d/1urTlsaMGV7rcHt9I6HVLNyOqUQOZQfv0/view?usp=sharing
I agree it’s obscured enough that it could pass as the back of the castle.

I also hope Krennic’s shuttle can be removed, it’s a very distinct ship so it really does stand out.

I feel it felt more natural having the TIEs coming from space and flying towards the camera, no? i.e. coming in from high to low then cut to flyover.

Yeah perhaps! I think the way the camera is moving dictated to me how the ties should fly, so that’s what I went with, but you’re right it’s three shots in a row like that!

I feel like some sequences in the prequels of ships flying had similar perspectives back to back (I guess they figured since the backgrounds change so much it won’t feel like a jump cut). Dooku’s meetup with Sidious at the end of AOTC comes to mind, not that the prequels should be any reference point for good composition and sequencing!

Unfortunately, creating a new flight path in C4D is kind of like starting from scratch (that alone took a couple hours). So at least for now, this is what we have to work with.

I made the Vimeo downloadable, and if you select “original” under download that will be the prores render straight from After Effects!

For some reason I seem to recall somebody here actually made a (brief) shot of the TIEs flying straight at the camera above the forest. It was in one of those extra-extended intros that included the Battlefront cinematic. Might have to go digging…

Tragedy of Vader - A Novelization of The Rise of Skywalker

@Poppa Yeah, I thought as much. Your limited time is much appreciated though, man.

I just feel that narrative speaking, anything moving left to right or back to front shows the story progressing but anything from down to back makes for a weird transition.

@jar jar Yeah, 21C Peasant did a great job but he had to use a 720p pre-rendered source from YouTube. We did our best at getting him 4k footage but the TIEs still looked a little off.

Yeah the motion of the TIEs seems like what’s best for the footage, if only it could be reversed without the smoke looking funky then it would work perfectly. Perhaps the documentary footage could help by breaking up the three shots? Alternatively (or furthermore), could the forest flyover be reversed so that that’s the one with the TIEs approaching the camera? The smoke there is much more static.

I would think that’d only work if the footage were also reversed, which can’t happen because of the mist and vapors.

I think this new shot is just fantastic. I look forward to messing with audio and baking it together to demo. 😃

That could work, though it’s not exactly that simple in C4D unfortunately! Might be weird if the shot isn’t reversed, though, which I don’t think you can do because of the smoke.

Also, shouldn’t the ties be flying towards the forest Nev added?

Edit: Yeah Hal! Would love to see how it feels when the audio is mixed and go from there.

I assume most won’t agree with this idea, but I think flipping the Vader’s castle shot might help in it’s favour in looking more original/unique to Rise Of Skywalker and less comparable to the Rogue One - Biomes shot.

This is turning out to be pretty spectacular! Sorry if it doesn’t seem like I’m contributing too much lately, I’m just eager to see V2 together.

I’m hoping and praying everything will go alright for you, MR.

I think the way the camera is moving dictated to me how the ties should fly, so that’s what I went with, but you’re right it’s three shots in a row like that!

I think this is the most important thing. If it doesn’t match the camera movements, it’s going to stand out. And I don’t think it’s going to be too jarring to have three shots of the ships flying away from camera - the perspective of the camera changes enough (low angle/high angle shots) that I don’t think they’ll feel too samey.

If we go with Cinefy’s idea of mirroring the shot, I’ll only point out that we’d have to go back to the V1 forest flyover shot, to maintain a constant right-to-left screen direction between the shots (which wouldn’t be an issue).

I think the way the camera is moving dictated to me how the ties should fly, so that’s what I went with, but you’re right it’s three shots in a row like that!

If we go with Cinefy’s idea of mirroring the shot, I’ll only point out that we’d have to go back to the V1 forest flyover shot, to maintain a constant right-to-left screen direction between the shots (which wouldn’t be an issue).

Was just about to point this out.

Tragedy of Vader - A Novelization of The Rise of Skywalker

Oh, my! I don’t have Rogue One practically memorized the way I do the saga films, but I just checked Krennick’s arrival on Mustafar and yeah, it’s the same! I never would have guessed the Biomes thing was recreating a shot from the movie.

Nev could have saved a lot of effort it seems by just painting out the shuttle from Rogue One itself.

So, I see what you mean, and flipping it shouldn’t be any problem.

The Biomes shot to its credit does extend the back of the shot to linger on and move across more of the lava fields, something which has been cut from this sequence to make room for the forest flyover. But yeah, I also don’t have RO memorized and didn’t realize how close it was.

That’s a shame, Poppa. I definately wasn’t suggesting reversing the original footage, did that before and the smoke look well off.

Yeah I think let’s see how the sequencing feels after Hal plays with it!

Looking at the shot a few more times, it makes sense to me that the ties would be going towards that brighter lit forest area behind the castle, which is where Kylo is

But if feels wrong in sequence we can look at it again down the road.

Honestly, to keep screen direction consistent, I think how it is now is best. Otherwise it would look like the TIES were flying toward the planet, and then turning around and flying back.

Honestly, this is all great and amazing work that has been churned out from this community. However, I deeply and absolutely hate to be that “nitpick” but I just feel that something is off with both the first and second shots, the first shot mainly the TIEs, and the second one, being entirely all of it.

The TIEs themselves are very smooth, if not too smooth (however thats something I’ll touch on to in the next sentences) however, they have a slight jump in the animation but I’m not too sure. However the more noticable ones are mainly the motion blur on the TIEs and the focal length of the render versus the focal length in the R1-Biomes shot. It seems to me that the shutter speed on the render doesn’t match up with the footage, giving it a slightly out-of-place smoothness to it, which is probably the more logical reason than the one I presented earlier.

The focal length is slightly lesser of an issue, however I can notice that the perspective of the TIEs are slightly offset to the surrounding shot. All of these issues are also present in Poppasketti’s Falcon shot at the very end of the film (along with the indigo-blue engine glow, instead of the teal-blue glow it usually has)

The second shot is it’s own can of worms, but to summarize: It just feels out of place entirely. Even taking out the TIE issue, the shot of the forest (for me) doesnt look like the one in the next shot, however that’s just pure subjectiveness at this point and it’s ultimately Hal’s final call on the matter.

I’m just extremely tired right now since its 1AM and I’m seeing things wrong so please correct me so. Sorry if I sound like I’m insulting all of the work done here, because I know the love all of you guys pour into the film and your dedication and passion, I just want to give some constructive advice and to make the visual effects of this edit match the high-fidelity of ILM, in an effort for a more seamless and enjoyable experience.

Well, I managed to find some time last night to at least get a first pass out!

I sent over the project files to Nev (including C4D files and models) so he can integrate any color correction or other tweaks he’d like to make.

WOW poppa! that is absolutely incredible. I hope one day when I have a stronger computer to learn how to make my own ship animations, you are an inspiration!