Something I’ve whipped up

Revenge of the Sith with TCW opening
https://youtu.be/YQkq54AmaM8

You just fixed the opening of RoTS.

What are some things that you can’t fix about the PT?

For example: in TPM, having Obi-Wan be the one who goes to Mos Espa with Padme, R2-D2, and Jar Jar and then meets Anakin.

I don’t see the use in discussing such things. Might as well go to the rewriting section.

Anakin’s age in TPM is another one. Shoulda been 19.

Anakin Starkiller said:
Anakin’s age in TPM is another one. Shoulda been 19. 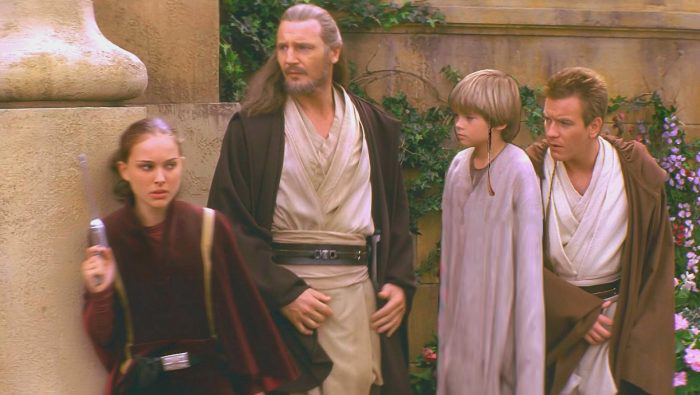 I’d love to see someone deepfake AotC Palpatine with TPM/RotS Palpatine to get rid of the inconsistent aging makeup.

Has anyone ever tried to remove the yellow Sith eyes from Anakin in ROTS? I think there’d only be a few shots to have to do.

Has anyone experimented with replacing the dated digital model of Maul’s top half falling down the shaft? A CGI replacement probably wouldn’t look more realistic, but if it was smaller like we were seeing it further down, its fakeness might be less obvious. People are doing some wild stuff with Battlefront assets these days…

Co-author of STAR WARS: THE RISE OF SKYWALKER - THE TEAM DALE REWRITE

I definitely think it’s possible. Somebody just needs to put in the work. It’s probably not that hard.

Has anyone experimented with replacing the dated digital model of Maul’s top half falling down the shaft? A CGI replacement probably wouldn’t look more realistic, but if it was smaller like we were seeing it further down, its fakeness might be less obvious. People are doing some wild stuff with Battlefront assets these days…

If you just want his body parts to become smaller while they fall, you could try to rotoscope them out, use a digital zoom on them and put it on a clean background. That should be rather easy to do. You could use runwayml to mask out maul and use a still image for the background. (if it isn’t already a still frame in the shot where he is falling, I can’t remember that right now)

What do you guys think the best way to turn 1-3 into two movies would be? Eliminating one of the films entirely? Combining 1 and 2 or 2 and 3? Something else?

I’m curious because I’m envisioning a new version of the prequel trilogy that uses the Kenobi series as a base for a new Episode III (which of course we wouldn’t know how that would be until it comes out).

Skip 1 since it’s less directly relevant and has a massive time skip.

Skip 1 since it’s less directly relevant and has a massive time skip.

This was kinda what I was leaning towards as well. Also maintains Hayden as Anakin through the whole trilogy if done this way. Though the time skip between Revenge Of The Sith and Kenobi would be just about the same as TPM and AOTC.

What are some of the best ways people have seen (or can think of) that change the plot / cut down runtime of AOTC by changing the subtitle for Zam’s death?

Of course there’s L8wtr’s ‘He hired me on planet Kamino’, which always struck me as a clunky line even though overall I think the L8wtr’s strategy for increasing the pace of AOTC is a good one.

(Edit: for those not aware, L8wtr’s edit therefore cuts out Obi-Wan’s investigating both in the Jedi Archives and at Dexter’s diner)

is there any fixed or polished version of this deleted scene?
https://www.youtube.com/watch?v=WR0U8mCVYO0

The question is… I would have no idea what storylines I’d want to use for this new Episode II. I know I’d probably start it off with the last episode of Season 1 and first episode of Season 2 of Tarkovsky’s Clone Wars series to give a proper introduction to General Grievous and then have a little bit of a time jump to account for Obi and Anakin’s different hairstyles between both series. And one major corner of concern I would have as well (and this sucks because I actually do like this character a lot) is to try to cut around Ahsoka as much as possible since I think it would be weird to have this significant apprentice character for Anakin that then doesn’t appear in Episode III or isn’t mentioned at all. I’d also want to make sure that whatever storylines I do use, it has a pretty consistent thematic and character arc for each character to successful bridge the gap between “Episode I” and Episode III.

To me the change in medium makes this an instant no-go, but I’m sure others feel differently.

Thanks! I’ll have to check them out.

I actually saw this post and intended to chime in last night before I ran out of time.

If you wanted to do AOTC > [something CW] > ROTS as a self-contained trilogy, you have a lot of options, depending on the story you want to tell. Other Clone Wars editors than myself have created movies from this content, a lot of which are really really strong - so it’s worth checking those for ideas and to see what works.

I guess your key decision is Ahsoka/No Ahsoka/Minimal Ahsoka (maybe where you just explain her away as a temporary padawan or something in the crawl).

If you want to tell simply the strongest emotional journey across the Clone Wars, I think Ahsoka would be your focus. That means going a bit off your brief, and having your Clone Wars episode introduce and develop Ahsoka (hard to do in one movie but probably possible), and then conclude with something that overlaps ROTS and the Siege of Mandalore. I think that’d be the best short telling of the Clone Wars. Your Clone Wars episode might have to be something like Ahsoka’s introduction on Christophsis and perhaps the Cad Bane arc (good romp, develops their relationship, also goes the Palpatine/younglings angle), whilst Obi-Wan is off pursuing Darth Maul in advance of the Siege of Mandalore content, before capping it with Ahsoka’s fall. But Ahsoka’s excellent conclusion really depends on Maul, which naturally would suggest that you include TPM in some way, or at least those scenes, perhaps in flashback.

Anyway, I think that probably isn’t exactly what you’re going for. In terms of a more ‘straight’ AOTC > [custom CW movie] > ROTS, your CW could combine one or more of the following, depending on your priorities:

I notice that all of this is extremely light on Grievous. He might not actually appear in any of those I’ve mentioned. While he does appear in a lot of TCW, a lot of the time he feels neutered. He never even sees Anakin (because of ROTS’ line where he’s suprised about Anakin’s height), so ends up in drawn duels with Obi-Wan a lot, and his military strikes are often defeated. Since originally ROTS introduced him afresh, you could just ignore him in TCW and just let ROTS introduce him as it did originally.

Hope that helps! Ultimately I’m a proponent of the other approach - where I think that the best way to enjoy the clone wars is to keep it as a TV show whilst trimming the fat - but I’m happy to continue helping you think through this if you need someone with TCW loaded firmly into their brain.

Wow, thanks man! All of this is some really good insight.

Honestly, this was just a whim thing I’ve thought of over the years. But honestly, I may actually crack into this edit fully at some point, especially with help like this in regards to trying to get things organized and what not.

Pleasure to be of help.

I actually spent ages yesterday thinking and typing up how I’d approach a movie or movies, but couldn’t crack it for you. If it were me, I’d want to do something with the ‘as much as possible that’s related to SW media’ bullet above, combined with the core of the Maul/Mandalore content. But that’s definitely more than one movie, perhaps even three or four, and then your challenge is far more complex in terms of breaking it down, combining, and pacing. It’s something I might think about after I finish my TV show, but really, when I was thinking about it, I kept coming back to key moments in the TV show that I’d be cutting that I didn’t want to. But hey, I guess that’s why I’m focusing on a TV show, whilst you’re focusing on movies! Best of luck either way!

I don’t like Darth Maul in TPM, he is just an evil face doing backflips. So why not give him some story and make him Qui-Gon’s ex and give them some history, that would add some real drama to their fight. And it would fit in nicely with the rest of the story as it would raise the question whether Anakin will end up like Maul, turn evil and kill his loved one (spoiler alert by the way ;D) or will he be chose the right way, like Qui-Gon did.