Sorry if this has been asked, but are the included 1080p blu-ray versions from the new (maclunky) scan too, or did they just repurpose unsold blu-rays?

Sorry if this has been asked, but are the included 1080p blu-ray versions from the new (maclunky) scan too, or did they just repurpose unsold blu-rays?

yotsuya said:
Also, The Phantom Menace is not from any 1999 versions. The 1999 digital version (nicely captured and share in 1080p) is more cropped and has different colors. It was rescanned for the Blu-ray and has different colors and more image. If there is any piece of the 1999 DI, it is likely the original pod race sequence that was released in HD. It is more cropped than the BR but it doesn’t seem as cropped as the DVD and EU HD broadcast.

Hey lets just be clear about this.

Basically TMP had no “Digital Intermediate” as we know it. Shots were digitized as needed, altered and then printed back to film. So the “master negative” of phantom is a cut negative comprising entirely of digital filmouts (with one exception). The resolution of these scans is most definitely 2K and the visual effects rendered at 2K or possibly less depending on the complexity of the scene.

This article here about the post conversion tells us how we got our current digital master. https://www.fxguide.com/fxfeatured/art-of-stereo-conversion-2d-to-3d-2012/

when Episode I was originally finished, it was done on a per shot basis – “done sort of old style, final a shot, film out a shot, look at a print of that negative and that’s what we would final”. It went through a conventional negative cut. An optical timed IP was generated from that and then then master printing negatives were made from that timed IP. So everything audiences saw in the theater was two generations down from the original. “When the original DVD was released,” Knoll says, “it came from scanning in the timed IP because it was the simplest thing to do. But when it came time to do [the conversion], we were going to take the movie and cut it up into 2,000 separate pieces, work on them and re-assemble it, we had an opportunity to go back to the original material. We could go back to the original film-out tapes that are a couple of generations better than what had been seen. So we figured let’s do that. We made a concerted effort to collect all the bits, re-create all the dissolves and pre-wipes. So that was all pre-graded material, so we had to do all new color timing, just to have the new Blu-ray master. Then there is a device-dependent color timing that’s done to compensate for the light loss that comes from stereo.”

So the 1999 home version of TPM, the VHS And the Laserdsc, both come from an early HD scan of an interpositive. The 2001 DVD used this HD Master, regraded it (for better and for worse) and inserted the new scenes (you can tell the new scenes as they have used digital noise to try and match the print noise from the interpositive).

The Bluray comes from ditching that “master negative” and going back to the digital film out files on tapes. Then a bunch of shit was done to make them more 3D friendly, nose reduction ect. and a lot of alteration on some shots. Im not 100% convinced that anything was “re-rendered” a lot of these changed shots could be simple alterations of the original source (Fode and Beed was definitely patched with after effects or similar, not a re-render).

The UHD appears to be an upscale of that master. But assuming that master was retained at 10bit 2K i see no issue with using it for the 4K.

Then a bunch of shit was done to make them more 3D friendly, nose reduction ect.

Then a bunch of shit was done to make them more 3D friendly, nose reduction ect.

Watto was perfect from Day one.

Im not 100% convinced that anything was “re-rendered” a lot of these changed shots could be simple alterations of the original source (Fode and Beed was definitely patched with after effects or similar, not a re-render).

Some scenes were obviously re-rendered: http://www.framecompare.com/image-compare/screenshotcomparison/1B01NNNU
(and the beginning crawl was also re-rendered).

From what I can gather about this set, the state of the alien dialog subs is interestingly inconsistent.

I, II, and IV have forced sub tracks.

VI and VII have burned in subs.

(IIRC, the others have no such subs).

To further clarify, subbed scenes have seamless branching. Both clean and burned in versions are on the discs. The variability was based on who reported it rather than the movies. 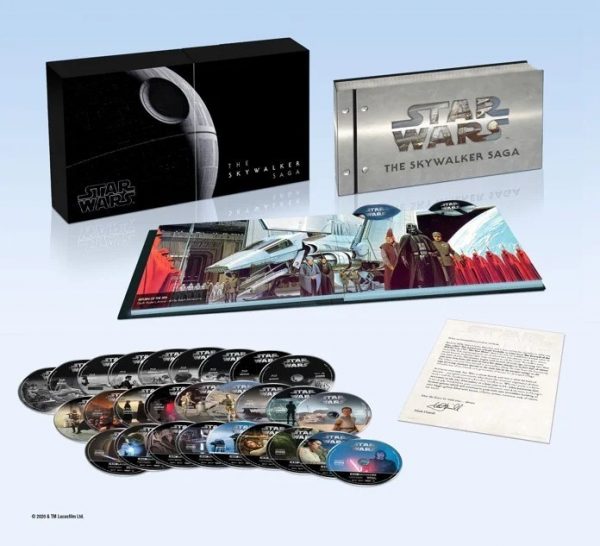 (To demonstrate the quality & type of box etc. Seems the discs need to be pushed firmly into place in their ‘housing’ within the box set… so there is possibility of some scratches and smudged fingerprints on the discs over time?)

^ There are many of these type of videos up on YouTube and seem to be pretty much the same thing over and again. The above videos are ones I found that concentrated on the boxset itself (good angles and centred on the box) - rather than focusing on / plugging themselves.

Here is a comparison of the different editions of The Phantom Menace (Laserdisc, HDTV, 2011 Blu-Ray, 2020 4K Blu-Ray):

We can clearly see that:

Here’s a proper SDR converted screenshot of the 4K PHANTOM MENACE disc. It looks awful, just look at the haloing around Padme.

That still looks pretty sunburnt to me.

I mean, haloing is appropriate, given that she’s an angel. 😉

My preferred saga experience:
TPM/AOTC/ROTS (Hal 9000), ANH/ESB/ROTJ (Despecialized), The Mandalorian,
TFA (Starlight), TLJ (Fallen Knight), TROS (Resurgence).
May the midichlorians be with you.

That still looks pretty sunburnt to me.

You’re right, but it depends how the conversion to SDR was made by JawTDS.
With madVR, I get more natural colors:

… but the same awful halo…

I trust MadVR in terms of colors, compared to the process used here. Nonetheless, you can get a good bearing on the detail of each transfer. Here are some more:

CLONES still looks bad, SITH looks great, and the Original Trilogy all looks fine. Not great, but fine. I’m just glad we are finally done with the 2004 masters.

I didn’t expect these to look any different than the D+ streaming versions, and they don’t outside of improved fidelity.

Thank you for those screenshots. In terms of detail, I think they all look pretty good relative to their source. I was afraid the films had been DNRed to death like Terminator 2 4K.

A close-up copy of the letter from Mark Hamill that is included in the 27-disc 4K/UHD set:- 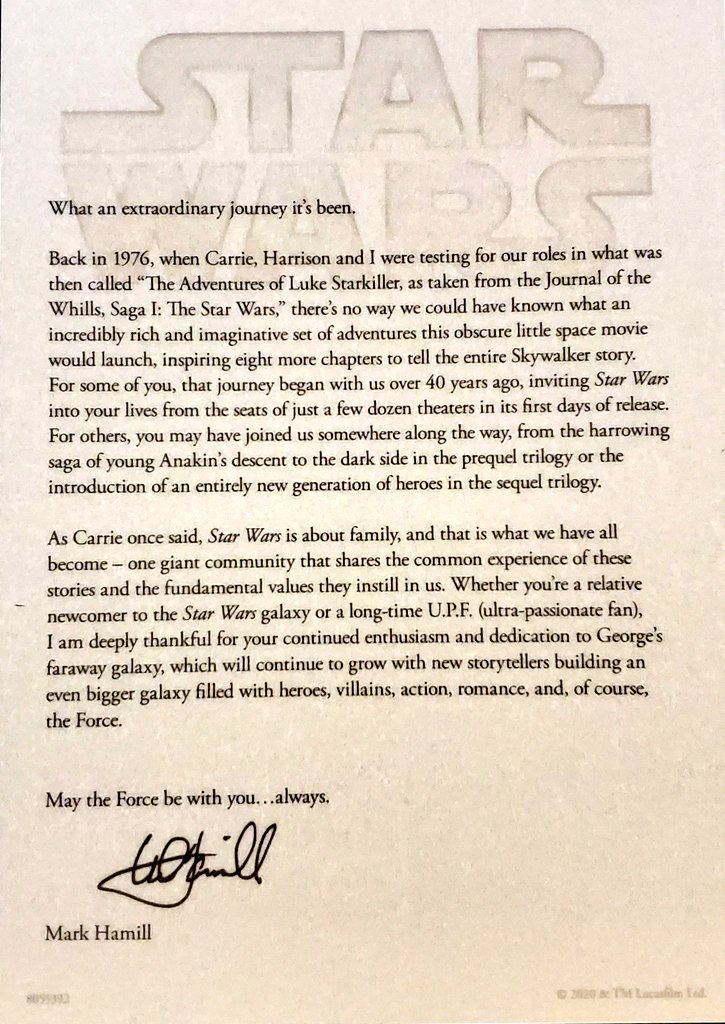 I’m extra curious as to how the blu-ray transfers of the '19 versions looks now, since that’s probably going to be a lot more consistent (and probably a lot more accurate) to how the colors and contrast are supposed to look per-film.

I’m not saying you’re wrong, but I’ll be damned if it isn’t a nice change from the 2011 masters. But you’re right, they could be better.

I’m not saying you’re wrong, but I’ll be damned if it isn’t a nice change from the 2011 masters. But you’re right, they could be better.

The OT definitely could use a bump in contrast and brightness, which would go a long way to making it look more filmic. They also still look lacking in the yellow department.

These all look the best they’ve ever looked officially, but still leave a lot to be desired.

AOTC looks about as good as it can given the source footage was 4:2:2 8 bit, still the colors could be a lot better. You can tell the grading is lacking the quality that ROTS has.

ROTS looks about as good as a new movie sourced from a 2K DI. Colors are great still for a 2005 digital film, extra detail from the 4:4:4 10 bit source is noticeable.

The OT is the best I’ve ever seen in terms of detail, with the exception of the excessive DNR. Colors aren’t purist, which isn’t surprising, but for non-purist colors they still leave a lot to be desired. Still tho, this is an incredibly disappointing transfer compared to other classic films I’ve seen on 4K or even standard blu-ray. Just imagine how good these films would look if they were done by a company like Criterion.

I’m happy for major improvements, but we are still very far from having transfers that lives up to the legacy of these original three films.

I didn’t get the full set, only the Original Trilogy and The Rise of Skywalker. The prequels have grown on me considerably over the years, but I’m fine with watching them on the 1080p discs.

I hate the Unaltered versions aren’t available, but I must say I’m blown away by the sights and sounds of these discs. I felt like a kid again while watching these with the sound WAY up. I’m extremely thankful for my Harmy discs, but I like having this release as an option too. As others have said, I can’t wait to see what the the next round of Despecialized looks like.

*I still haven’t seen 4K77 or 4K83. My midichlorian count is not high enough to obtain them.

I hate the Unaltered versions…

Are there any comparisons out there (been looking, can’t find any) that side-by-side these '19 blu-ray tranfers with the '11 transfers. I know most people are primarily interested in dissecting the 4K presentation, but these new 4K discs/set do appear to be the only way to get the new transfers on blu, and I’m very curious to see how these new transfers look on that format, especially compared to 2011’s entry.