How did you get around the hangar reveal MR? That scene seemed like the toughest to pull off in my memory

As well as the hangar scene, how have people generally handled the earlier scene on the Star Destroyer, where Rey and Kylo fight in his quarters? (The scene where the Vader helmet pedestal gets smashed.)

If I may ask, what’s the current trajectory of Rey Nobody looking like? Is Rey still going to be the one who murdered her parents? And speaking of, what’s their deal anyway? I’ve heard some discussion of “Were they good people?” “Were they still kinda lame and scummy?” I’m not really sure what the current look of the project is though.

I don’t know how possible it would be to aim for Rey’s parents to be lame and scummy, but I definitely think it would be stronger from a character perspective, not to mention being more in line with The Last Jedi. (The fewer ret-cons the better, I say.) If Rey is going to have murdered her parents, then you’d want to make it plausible that she’d fall to the Dark Side again. If her parents were good, Rey either killed them accidentally, or out of a misunderstanding. But! If they actually did sell her off, and Rey’s screaming into the desert after them…little Rey, so full of anger and bitterness…reaches out, and kills them.

If it was an accident, well, okay. She’s grown up now, she’s more mature, she can control her powers; it won’t happen again. If that innate darkness is fueled by a primal, justifiable cause though? Man, oh man, she could snap at any time. Maybe she will finally turn…

Your edit is almost there too - just trim the line about “Palpatine had your parents killed” and the flashback with them in it, and all of the dialogue works perfectly. Besides, that makes a stronger story thematically too - Palpatine isn’t some lame boogeyman who’s been plaguing Rey since childhood; he’s more so here to act as a metaphor for her own internal darkness, and he’s only interested in her because he can sense her darkness now that it’s manifested.

I think Dom’s basically goes into as little detail as possible regarding her parents. Basically Ochi captured her parents, couldn’t get an answer out of them (maybe they were too drunk? Lol), and he killed them because he felt they were useless. At least that implication is left up to the audience. It isn’t spelled out either way.

It would require more changes, but I would personally want to cut out any mention of her parents completely (besides when Kylo mentions them in their first force bond). You then could change Rey’s vision earlier in the film to be about the future, and the battle at Exegol. She sees her friends in danger/dying, and she sees herself on a throne. Keep this vision separate from Kylo, they don’t share this vision together.

Then during their force bond duel, Kylo can say he also knows about the vision, because Palpatine saw it too. You replace the moment of Rey remembering her parents dying with seeing Finn/Poe dying/in danger again. Kylo tells her that she needs more power. So she gets angry about it and swings at Kylo some more. Then, in the hangar, he tells Rey that Palpatine saw what she would become. She will Palpatine and take the throne. This confirms to Rey that what she saw might actually come true.

Want benefit to this is it keeps Rey’s motivation to want to kill Palpatine. If she doesn’t, her new family dies. But the only way to save them is if she takes the throne.

I think having this dilemma haunt Rey helps lean into the question of having to sacrifice your morality to save the people you love. Palpatine presents her with one dark path, and Kylo presents her with another dark path. In the end, though, she finds that alternate path where she maintains her identity as a Jedi.

I like RogueLeader’s mindset for a nobody version. Having anything to do with her parents kind of muddles up everything. In the last movie, just keep them as losers/drunks or whatever and that’s that.

Changing the focus on any visions or whatnot on her “new” family getting hurt/killed/whatever works better thematically for her and is a better motivation against Palps. I think that can be doable. Using flashes of the final battle or whatever would help with any vision stuff.

Thanks jarbear! I think the main hurdle is just figuring out the new dialogue for Kylo from what we have to work with.

Alternate ideas like Rey killing her parents and RL’s vision thingy are great, personally I’m on the side of skepticism as to how they can be accomplished and that’s why I’m going with the most conservative route possible. But I would be glad to be proven wrong.

The biggest hurdle to a Rey Nobody edit is the simple question of “what is Rey’s personal arc in this film?”

In ROTJ Luke is trying to save his father.

In TROS proper Rey is grappling with the true lineage within herself.

I like the idea of Rey killing her parents since that would be something she doesn’t want to accept. But I don’t feel like that is a good enough reason for her to reach the point of anger on the Death Star that she did. Honestly, with her character, that revelation of her evil with also being a Nobody would probably cause her to freeze instead of fueling her to fight.

I don’t really have answers to these questions but I think about them when perusing this thread.

After being beaten and battered by prequel hate, I promise not to be that to the next generation.

Oooh, yeah, RogueLeader’s plan seems really solid conceptually. Plus, given her complete lack of biological family, it would make sense for her to feel so protective of her current “family.” It feels like a natural progression from TLJ.

So what scenes would actually need to be changed to remove the Palpatine lineage?

I think her anger towards Kylo comes from two places: 1) He is her primary obstacle between her and the wayfinder, which she needs in order to kill Palpatine and save her friends. 2) Kylo keeps sewing doubt in her own moral fortitude. He manifests her insecurities. So if she gets rid of him, she can erase those insecurities in a roundabout way.

I think her anger towards Kylo comes from two places: 1) He is her primary obstacle between her and the wayfinder, which she needs in order to kill Palpatine and save her friends. 2) Kylo keeps sewing doubt in her own moral fortitude. He manifests her insecurities. So if she gets rid of him, she can erase those insecurities in a roundabout way.

That works for me, personally. Essentially at the time of that battle, she basically has tunnel vision and quite frankly, you SEE that with her in action and words.

Question: What about the ship? AKA the ORCHI/PARENTS Ship? That is the one hiccup I can see if one was to pretty much remove the whole parent thing in this movie.

For Ochi’s ship, I think it will work well enough if we just remove her saying “I’ve seen that ship before…” If anyone notices that the ship looks like the one from TFA, they can just assume that it’s the same model, but a different ship. Kind of like a car. Anything else would require swapping out CGI models either here or (more easily) in TFA.

You could recolor the engine glow to help separate the two ships. Also, I would just suggest removing the ship from her vision from TFA if you were doing an edit of the whole trilogy.

Also, you could argue that since it was seen in a vision of past and future events, she was actually seeing Ochi’s ship in the future, flying away with her newfound family rather than her old one like we thought. Not everything in her vision was accurate to how things happened in real life.

Maybe the ship in the flashback could be towing an explanatory banner behind it.

*MISSING: ONE SITH DAGGER. IF FOUND, PLEASE RETURN TO OCHI ON EXEGOL*

No, but recoloring the engine glow really would be a solid way of differentiating the ships. Great idea!

Do they? God, what’s wrong with this movie?

They are different? Im sure if I look at all the comparisons I can then see a difference, but the movie heavily implies its the same. Trying to make it more visually different would be helpful.

Even if they look different (not sure what the difference is) they’re too similar as is if you want them to be different ships. More drastic changes would probably be needed.

The difference is minimal, it’s likely that the ship’s exterior had been stripped whilst it was sitting around in the desert: 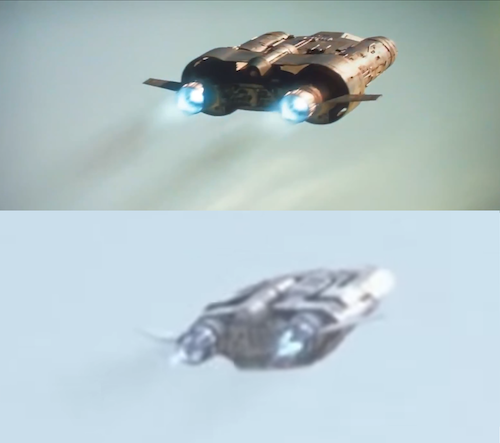 For a nobody edit making a change to it would be nice. I think someone suggested changing the engine thruster color? That is an “easy” 1st step.

This might be a dumb idea but would it be possible to just lift the scene of Rey watching the ship liftoff in the TFA trailer/TFA and use that as Rey’s parents leaving? That way, you can have two different ships for Ochi and Reyrents.

Obviously, that would also mean you’d have to cut out the scene from TFA as well (although with the clip I’m linking, I think it’s an alternate shot anyways so it might work without having to cut anything).

The clip in question: