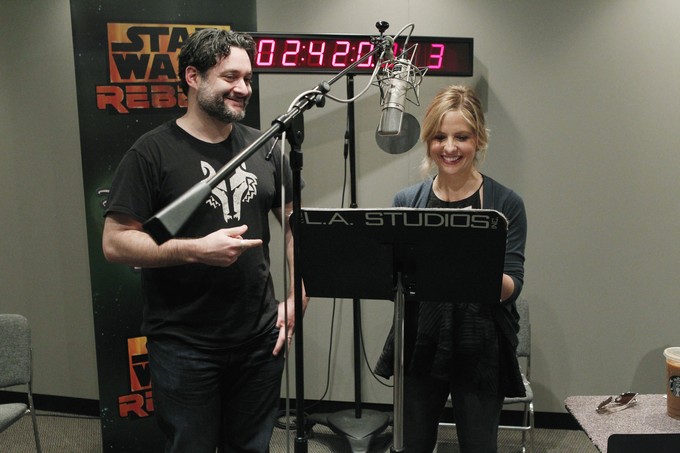 Totally agree rpvee. I've been underwhelmed so far, but this gives me hope for the 2nd season. I was completely unspoiled, so I was in total shock at who we saw! It was great on both appearances.

Anyone else watch the Sports Nation Star Wars episode yesterday? Haven't watched that show in years, and just happened to have that channel tuned into my TV when I turned it on. It was great.

First time seeing this project and must say I'd love to get my hands on these (both GOUT AND 97). Would it be possible to get a package sent out like vbangle got (just for SW)? I do have access to MySpleen, but would like a package to show off on my DVD/BR rack. If an "arrangement" could be worked out, I'd love to have them.

I know it is just a rumor, but really cool Ewan is open to playing the character again. I'd be up for it.

Never saw CHRONICLE, so really don't know anything about him. I'll prob catch the Fantastic 4 reboot when it comes out.

Funny story. My Dad took me to see Empire which was playing at "The State Theater" in downtown State College, PA (where Penn State is located). I was 3 years old, and it was the 1st movie I think he ever took me to (well at least I remember seeing). The theater has all the light bulbs in front, as shown in the picture below. Since I was 3, I equated the light bulbs with the stars from Star Wars and thought Star Wars owned the movie theater. I remember I saw the Muppets movie a year later, and thought the Muppets movie must be renting from Star Wars. The theater is still standing, but was shut down until a fund raising campaign happened by local leaders and the theater was remodeled to house live, music, and film events.

I think I saw Star Wars after Empire at a screening on campus. I'm pretty sure I saw Jedi at the same theater.

These really look great. Can't wait to get my hands on them. Could also use a myslpeen invite, which would be much appreciated.

The Empire is headed to Vegas, baby. Darth Vader, accompanied by a legion of his finest imperial troops, will address emissaries from "a galaxy far, far away" for a most impressive announcement at the Consumer Electronics Show.

Should be interesting to see what the "most impresisve" annoucement is, but I doubt it's the OOT uncut and fully restored to BR glory.

Do any of you guys have a LG BH200 player? I have one, and tried burning the movies (both ANH and ESB) to discs via img burn and nero image as well and can't seem to get it to play on mine. It seems like it picks up that it's a BR disc, but then gives a internal read error. I've tried burning a few discs, but they all give me the error. Not quite sure what's going on.

Funny tat. Though it's funny the head doesn't have the blood coming off it since that was a PT decision. And is Darth's outfit a PT or OT one? I never paid much attention to them. I thought this looked more like the PT one.

Keep in mind this is a minor bug, but still a bug lol.

I use AI's roboform toolbar (great tool btw) and it doesn't seem to be working for me with the new software. The old forum it worked fine on, but can't get it to work with the new one. This is for both FF and IE. I type in the username & password to log in and login. Before I do that, on the toolbar I click Save. I look in my passcard editor and it does show the new login info there, so it does remember the new login info for the site.

I'm not sure what the problem could be, maybe a javascript error perhaps? Anyone else use roboform?
OK thanks Jay. Please keep me posted on what you find out.

Moth3r, all I got running is Flashblock. I even just tried uninstalling that and that made no difference. If this helps at all, my other FF extentions are:

<!-- Referer: -->
This is pretty strange. I'm running both Windows XP Pro and Firefox 2.0.0.12 on my laptop and on my desktop. Seems I can login just fine on my desktop, but my laptops still giving me trouble. I've tried clearing out my cache, cookies, etc. that might have something to do with it. But that didn't work.

On my laptop, I try to log in at the main forum link http://originaltrilogy.com/forum/ (at the top). I enter in my username and password and click remember me. The strange thing about it is my password isn't encrypted like it should be (I see the letters typed in). So I click to LOGIN and it takes me to the login page. I try typing it again in the main section (not at the top) and it just reloads the login page. This time the password is encrypted in both spots where I try it. Doesn't log me in, just seems to reload the page. I try at the top too, but that doesn't work either, just reloads the page.

I've never seen this before, it's really strange. And using your old forum software link, I can login under that board on my laptop. Any ideas?
Hmm, I tried resetting my password to a new one and still nothing. The top login form box even shows the password you type in (as in not encrypted like the dots you see everywhere else). On the login page it does work right, but I still can't login. Definitely something strange going on here. Something Jay might want to look at.

Are all you guys using IE? Besides Mielr of course. ;-)
Is anyone else having Firefox login issues? For the life of me I can't login using Firefox, but I just tried switching to IE (via the handy little IE switcher add on) and I can login. Not quite sure what's going on here. Through the old forum software link in FF I can login of course, but not in the new one. Any help? Thanks.
Caught both eps. Nothing wow'd me, but it wasn't bad enough for me to take it off my DVR list. Plus, it's pretty good to watch in HD (if my local WFLX station could get their act together). Even though the pilot opened up to huge numbers, I expect it to drop off just like what happened to Jericho (which you guys should check out when it comes back) last year. The only thing they got going for it is the strike, other wise I would have been surprised it lasted more then a few eps. Though the huge opening was a lot more then I expected, so they might have kept it on a little longer if the strike wasn't going on based off that.

Regarding the show, the actress who played Sarah was pretty good even though she didn't look nothing like her. That didn't bother me too much, characters change all the time. Hell, if the strike didn't post-pone the new Justice League movie, we'd have 2 different actors playing Batman and Superman at the same time as their movies are coming out. Plus there's Smallville as well. So I didn't have as much of a problem with that as I do some other stuff.

I HATE both Terminators. They're so lame compared to the other Terminators, even counting T3. And yes, I'm counting Summer Glau in that. I did like some of the things they did with her model: being a new unidentified one, being different from the other terminators (more personable seemingly), being John's body guard and enrolling in school with him, plus she's cute as hell. I really wished they would have made her a love interest for John rather then a terminator. She played a similar character in Firefly/Serenity, so it'd be nice to see her do something different.

Regarding the T3 ignoring, would it have been possible at all to tie it in? I don't really remember T3 that much, but didn't Sarah die in '97? They set it in '99 with her still alive, couldn't they have just done it a couple years earlier? Did they make John the same age as he would of been after T2? Didn't follow things that closely. I liked how they did tie in her cancer (a little homage to T3) and how they jumped over her death in the new timeline. I think that would have been a pretty cool way to still sorta tie in T3 but basically wipe it out. Don't have a problem ignoring it though, but I thought that would have been pretty cool.
I'm sure this has been asked before, I must have missed it if it has. Did Ady mention the level of compression the dvd-5 will have vs the dvd-9?
Hey Ady, just curious... what do you do for a living?
Awesome news addy! Can't wait till it's released.

Originally posted by: corellian77
Back up your files!!!

I can see I'm not the only one that thought that. Great news though Addy, finally making the home stretch!
Originally posted by: adywan
yes it is the first one. i plan on doing a "making of " documentary for the bonus DVD that will incorporate both original behind the scenes footage from old "making of" docs and new stuff showing how i did some of the work on Revisited . In that screenshot you can actually only see one third of the actual layers & footage on the project layout that was needed to create this one shot alone. i guess now you can see why its taking so long to complete.

How long will the bonus dvd take to create? Definitely release the movie first.

Only joshing, keep up the great work Ady.

I thought it was pretty good. It would have been great to see it with a bunch of Star Wars geeks like the preview at CIV. It would have been a lot more funny that way I think, sorta like stand up comedy. But it still had it's moments and I thought the robot chicken debate was great at the end.

Agree generalfrevious, I thought Family Guy used to be pretty damn funny back before it was canceled. They'd have some pretty funny moments throughout each ep, then would have a killer line or 2 that made the ep pretty damn good. With the exception of tonights ep, since it's return it seems like they try to have the killer line every other joke which they don't pull off. They try too hard and should go back to their old formula which made it a pretty damn good show to watch. Not the mediocre show it is now.
Originally posted by: Zion
This was one of the trailers attached to Transformers. It'll be interesting to find out what it actually is. I just hope it doesn't turn out to be one of those Shyamalan type movies that are very mysterious with a lame twist at the end.
Like the smoke monster from Lost?