Hey all- been a long time. Where is the spoiler filled Tenet discussion at?

my misplaced sense of loyalty is pushed to ridiculous bounds.

I’d say your loyalty to ridiculous bounds are properly placed.

I know I’ve seen a McQuarrie that looks like the ship on this shirt. But flipping through a few books and combing the internet have failed to turn it up. Anyone have the source?

EDIT: Sorry- I don’t know how to picture here anymore.

I watched all of Clone Wars (not a fan)

(haven’t watched Rebels yet- I don’t trust anyone who says it’s good- that’s how I ended up watching 6 seasons of Clone Wars!)

Here’s where I ask what compelled you to watch six seasons of a show you thoroughly disliked.

Kind of hinted at it earlier- people I trusted promised it got good soon. And when it comes to Star Wars, I’ve always been a glutton for punishment. I saw all three prequels multiple times- just to give them a fair shake, even though I hated each one as they were released. Clone Wars was not much different. I suppose I’ll watch Rebels one day for the same reasons.

The longest I’m willing to stick with a show that doesn’t engage me is two seasons. If it hasn’t improved for me by that point, I consider it a lost cause.

When it comes to Star Wars, my misplaced sense of loyalty is pushed to ridiculous bounds.

I watched all of Clone Wars (not a fan)

(haven’t watched Rebels yet- I don’t trust anyone who says it’s good- that’s how I ended up watching 6 seasons of Clone Wars!)

Here’s where I ask what compelled you to watch six seasons of a show you thoroughly disliked.

Kind of hinted at it earlier- people I trusted promised it got good soon. And when it comes to Star Wars, I’ve always been a glutton for punishment. I saw all three prequels multiple times- just to give them a fair shake, even though I hated each one as they were released. Clone Wars was not much different. I suppose I’ll watch Rebels one day for the same reasons.

Yeah, that’s something hopefully a future movie can show. There must be a course where everyone learns to speak in an evil British accent. 😉

Hey everybody- making my annual check-in.

I liked it a lot! Maybe even love- time will tell.

At least, those were my thoughts prior to the Maul ending. Anyone who brings up the Phantom Menace around me gets a paddling (except Frink, he can do whatever he wants). I watched all of Clone Wars (not a fan) so I knew this guy was still tooling around. But still- don’t want to see it or have to think about it. (haven’t watched Rebels yet- I don’t trust anyone who says it’s good- that’s how I ended up watching 6 seasons of Clone Wars!)

And there are a couple other things I disliked, but what the heck- on the whole it was actually pretty good.

Like others, I felt like it was a little rough getting going (the scene where the Imperial Recruiter calls him “Han ForeverAlone, no… Han HomeAloneKid” was a lowpoint) but I thought everyone did a great job and it really started to cook by the end. Too bad about the TPM reference.

I almost sat this one out due to what a stinker Last Jedi was… but my office paid for my ticket and I went during business hours.

It is a great book! The best part is the BTS stuff for the original trilogy- lots of pics I had never seen before. I was tempted to stop reading when I got to the prequel part… but as much as I dislike those movies, you can’t fault the technical approach to the full set and mini set construction. Pretty cool.

Hey friends-
My copy of Creating the Worlds of Star Wars: 365 Days came with a cracked bonus CD. I realized this too late to return/exchange it. Does anyone have or know where I can find that content? I’ve looked around and not found it.

The majority of that content was a bunch of Quicktime Panoramas or Quicktime VR or "Knollvision"s that John Knoll took of the Episode 3 sets. A lot of these were also posted as Hyperspace exclusives on starwars.com. I’ve looked around for archives of that too, but haven’t come up with anything.

Well that was …shit!

Still a better love story than Twilight. But not as good as TNNRRPPB.

I think I hated it.

I went in really hoping to like it, and expecting to. I liked parts of if… but I think “hated it” is the only appropriate summary at this point in time.

I didn’t love The Force Awakens at first, though it has grown on me. I have come to a kind of peace with what it is, so I’m surprised at how much I didn’t like The Last Jedi.

The worst part is that my 14 year old son loved it, and wants to talk about it. I don’t want to spoil it for him, so I’m reluctant to really talk about it… which is hurting his feelings. 😕

Hey, maybe this will help!

Man, what fun I used to have here.

Someone started a Star Wars pen and paper RPG at work and I played for a little bit. It reminded me of the wonderful NNRRPPB days, with Chaz Solo and the rest. No one at work was quite as amused as I was… but it was a good time.

I still find myself saying: Yesterday was a Lie coming soon to DVD.

And it’s still as untrue Today as it was Yesterday.

Good start, Duracell. Now start 5 years ago, and tell Boosty and me what’s been going on.

It’s just like a big ol’ family reunion! It even has bickering!

I’m waiting to hear back from Sluggo.

PRO TIP: If you want him to respond to you don’t call him Slugoo.

That is the most previous thing I have ever heard.

Previous? I don’t think that, what you think that.

That reminds me- have you learned to spell ‘sequel’ in the past several years since I last saw you?

I guess I never reported this one- but for some reason we had to split up to all see The Force Awakens on opening night. I took the older kids to one theatre and the wife took the youngest (the puppy lover, 6 at the time) to another theatre across town.

So the older kids and I were at the movie- watching Rey having a little lunch at her home base… and the camera pulls back and reveals the foot of a downed AT-AT… and we all looked at each other with knowing dread.

18 miles away, a little boy was crying and burrying his head in his mother’s embrace as she tried to console and quiet him, but he could not be calmed. Annoyed fans looked on as he sobbed over the loss of one of his fallen pups. 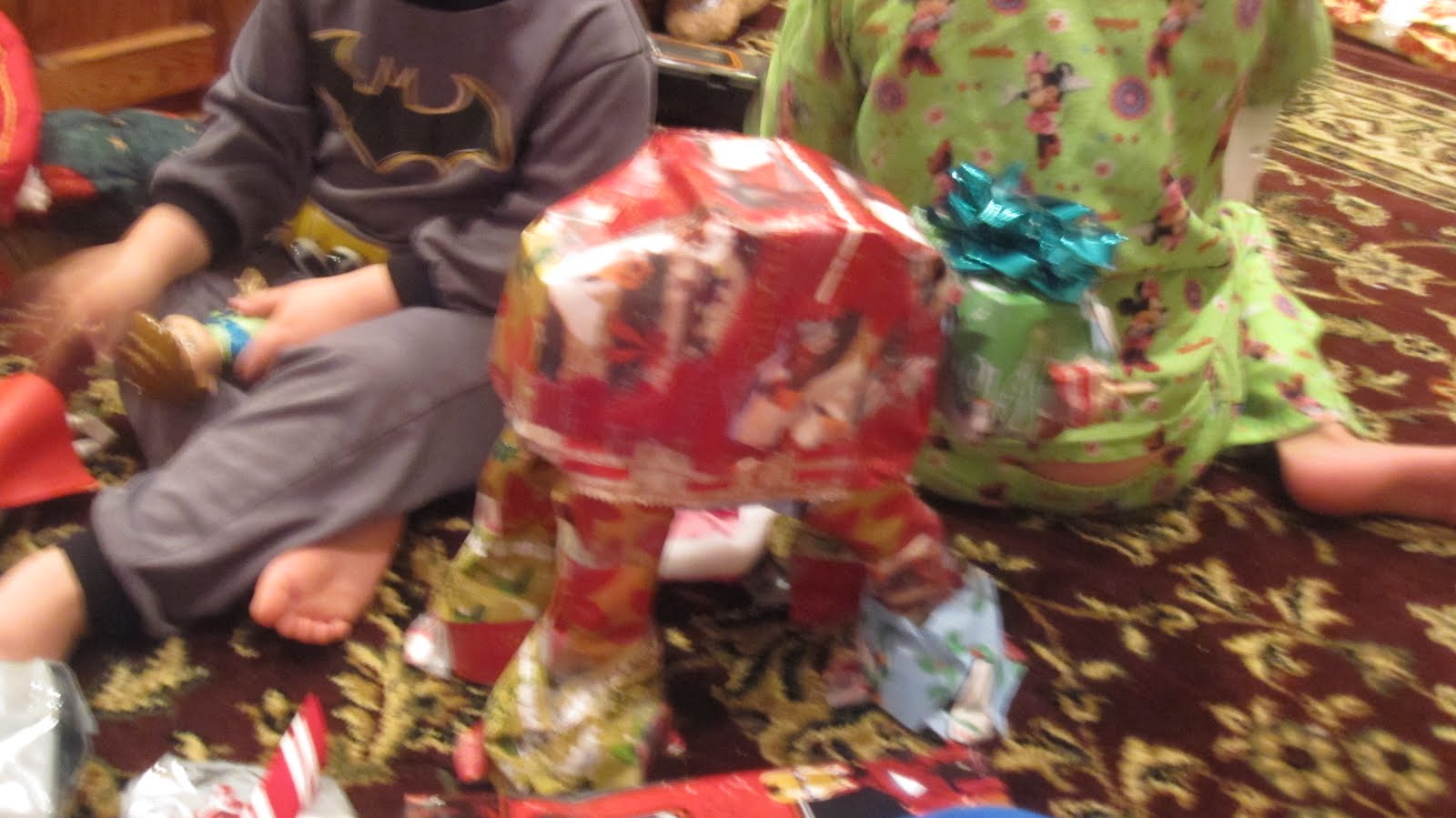 Last year for Christmas I gave my then 2.5 year old (now 3.5 year old) an AT-AT.  Note the clever wrapping job above.  (Don’t note the poor focus of the photo).  Since then, he’s lovingly referred to it as his ‘robot puppy’ and he plays with it on a fairly regular basis.  It was the one toy he took with him to our Thanksgiving party.

This weekend we watched Ady’s ESB Theatrical Reconstruction (which was awesome!) and I was really excited about him seeing his robot puppy larger than life on the big screen.  When they finally appeared, the other kids got really excited for him and started yelling.  At first he was silent as he watched it in awe… then he jumped up and down and cheered for the robot puppies…  and then the rebels brought down the first one.

He burst into tears.

He was quite upset.  A lot of things can make a 3.5 year old upset, so at first I wasn’t sure what had him twisted up.  But through the sobs, he told us that he didn’t like them hurting the robot puppies and it made him sad.  My oldest tried to explain to him that the robot puppies were the bad guys… but that didn’t help.

It was kind of awesome.

Watched ESB:R with the fam this weekend. My now 8 year old was still really sad about the death of the Robot Puppies. For the remainder of the flick, he badmouthed Luke, called him a puppy killer, and otherwise cheered on his failures.

Great kid! Either I’m going to spank him or I’m beginning to like him!

I know that this was sort of suggested on the 2nd page, but I think this is clearly the answer to the OP:

Now, I don’t agree with that… but then again… 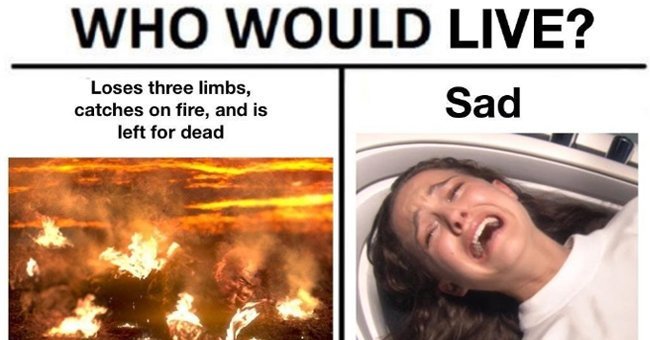 At some point I’ll probably watch this, but for now I’m happy to just say hi to old friends.