Wish they considered this more of an ongoing series than a one time production. The early episodes seeing the home movies of each of the major players was fantastic, to understand their energy and passion from an early age. Would like to see more of that as they worked through the next few decades and new teams.

Having seen this version, would have capped Kasdan’s producing on the era he was a part of, the physical model stage. But for the transition to computers i’d have made a second series and find someone to produce who was more involved. The computer stuff all seemed rushed. Enjoyed that they did bring a bunch of new faces into the documentary, and these later episodes an ode to the transition which Dennis Muren had chosen and Phil Tippett was being forced into. This second series could expand on the digital tool development and these early projects, but then alluding to the sequel trilogy return of the understanding of when it was more efficient to go practical with the SFX as well as their TV production work. A third series could focus on how ILM stayed focused on the advancement of systems of computer technology while the home computer revolution gave them new competition, the problem of trying to always be one step ahead.

goldendark007 said:
It’s playing at Alamo Drafthouse in Brooklyn, tomorrow at 9:30pm. Someone get there!

In full disclosure, I was a team member in the construction of the City Point development and that Alamo Drafthouse.

Not matching your description, as it includes the PT, but similar. https://time.com/3924420/star-wars-movies-overlap/ (no longer online)

Remember a youtube channel had the SW movies backwards, but they slowly got taken down.

Nice to see another website archivist! How is httrack? I was using wget for scraping for the few projects i’ve been involved in.

The Leia being freed by R2 screen shot from 4k83 (showprint A scan) has damage but the new scan of Jedi Showprint B does not have the same damage. Probably print specific degredation / vinegar syndrome.
Don’t think it is a reason for the 2004 removal decision.

Have been updating random Shot List Changes items here and there over the years. [Predominately visual as it went along with the DIF projects results.]

This year started a review of the audio changes.
First up was SW 1977 Stereo Mix vs SW 1977 Mono Mix:

The review was done in a two step process.
Pass 1: Listened to small bites (a specific shot or dialog fragment); going back and forth between tracks.
Pass 2: Waveform watch to spot retimed changes easier.

Here’s a page of Pass 2’s process showing examples of the items found.
http://fd.noneinc.com/audio/SL-SW-SvsM/SL-SW-SvsM-Examples.html
Pics are labeled by shot, but you can see the timecode at the top if you want to listen along.

Reviewed audio change lists from this forum and other online sources and documented/verified them.
Will probably jump to SW 1977 Stereo vs SW 1997 SE Stereo, next.

Wondering if it is worth creating a video using Pass 2’s presentation, but display a larger group of audios to fit into a 4k or 2k sized window. Then layer in those audio variations as tracks with small windows of the actual videos for reference. (basically 4k77’s audio listing) I guess one would be 1977 thru 1993 and a separate one for the SEs. Can achieve it by screen capping Audacity or some other player’s waveform display. Then compositing in After Effects. Will need to do a test or two.

Trash compactor scene, when Han says “You know it’s not going to take them long to figure out what happen to us” before watching the shot, listen for an odd sound effect which sounds like a dog or childs squeaky toy, then watch the garbage on the left of the shot as something on a string pops out. Ben Burtt having phun with some random thing from the set.

https://regalrobot.com/news/starwars-holochess-prop-replica-statues-reveal/
Tom (Spina - Regal Robot) sat down for a video chat with original holochess scene FX artists Phil Tippett, Jon
Berg and Dennis Muren. Learn more about the puppets and the sequence from the people who made it.

1st Decennial, and approaching the flip point from more time offline than on.

Good idea for a thread, an area not investigated. By this time the movies were premiering on pay tv so the WOC versions were not recorded and shared as often. This tread can be used to create a list of the general rebroadcast years/channel and with some research the premieres and other special broadcasts might come to light which might lead to someone saying, hey i’ve got that.

The FOX Premieres of two of the PT movies would start this off. Think i’ve got a poor VHS of TPM and AOTC which i’ve not digitized yet.

Star Wars: Episode III: Revenge of the Sith never aired on network TV. It made its basic cable premiere on Spike TV on Sunday, April 6th, 2008 on Spike."

Don’t recall finding any recordings of the Spike broadcasts as they aired. The basic cable channels did some themed bumpers at times so hopefully someone’s got a full recording somewhere.

Another possible WOC recording might have taken place when TNT/TBS did marathons. For example:
https://deadline.com/video/star-wars-jimy-kimmel-live-special-abc-marathon-tnt-ahead-of-the-rise-of-skywalker-bow/

The updates look great! What is the methodology you’ve got going on in the timeline? Do you keep slicing where the variations occur and shift everything downstream to expose the grey “Not in” messages? Are you keeping all the variations in one timeline or doing head to head match ups? Is a video output to replace WG in your future?

On the LFL logo, can’t explain why it’s shorter, but the intro green and outro orange color shifts are gone, so the logo is just fade into the grey then out. The logo is less showy now, but also lacks the historical nod to previous LFL logos.

A breakdown of the ESB 2019 general zoom in (loss of ~4.82% of the image) and shift (2004 shows more image) is written out with screen cap comparisons here:
https://originaltrilogy.com/topic/DIF-Difference-tool-to-spot-visual-changes-Current-2004-vs-2019/id/13179/page/3#1344390
The full DIF comparison can be watched from the website to make up your own mind.

The zooming in of 2019 ESB is problematic as it is unnecessary. How it was accomplished (the credits being un-centering) also aids to the opinion of lack of care involved. The additional cropping looses relevant information in certain shots.

As for other fan releases. The Silver Screen addition had no cropping regulations over it, so they could show more of the visible frame as people may have since it when in the theaters. Then for 4K77 they made the decision to return to a cropping as seen in official home releases.

Where are you reading that people are discussing the 2019 ESB cropping?

Quote : "Film editing has been called “The Music of Light”, “Sculpture in Time”, and “The Mobile Architecture of Film”. But what is montage? What role does film editing play in the art of cinema? How has it evolved, what does it reflect in the world around us, and where is it taking us next?

The documentary film Edge Codes addresses these most fundamental of cinematic questions, and elevates awareness and appreciation of the history, art, craft, and technology of motion picture editing. In combining film excerpts and interviews with eminent film editors, directors, and academics, Edge Codes demonstrates with its own style the very principles and techniques it examines.

Edge Codes delivers an entertaining and informative exploration of the motion picture’s “visual language”: its vocabulary of shots and sequences, its grammar of image assembly, and its evolution as a living, changing, global language."

Documentary’s focus is on the artistry behind editing film. Star Wars and George Lucas show up multiple times. [Connections to George’s film education history and the Canadian Film Board; editing techniques in Star Wars which were needed because of limitation of the shot film/characters; section on the EditDroid; and the transition to all digital and editing/rewriting/changing in all phases of a film’s development.]

Probably remember hearing about this doc coming out in the year leading up to RotS and probably the first time I heard the word Edge Codes. Unfortunately zero technical discussion of how edge codes work or exists but if you are interested in the theories or techniques used in film and how they evolved over time with the evolution of the equipment involved, then this is well recommended documentary to check out.

The Mandalorian has found their “SW Falcon Green Guy”. 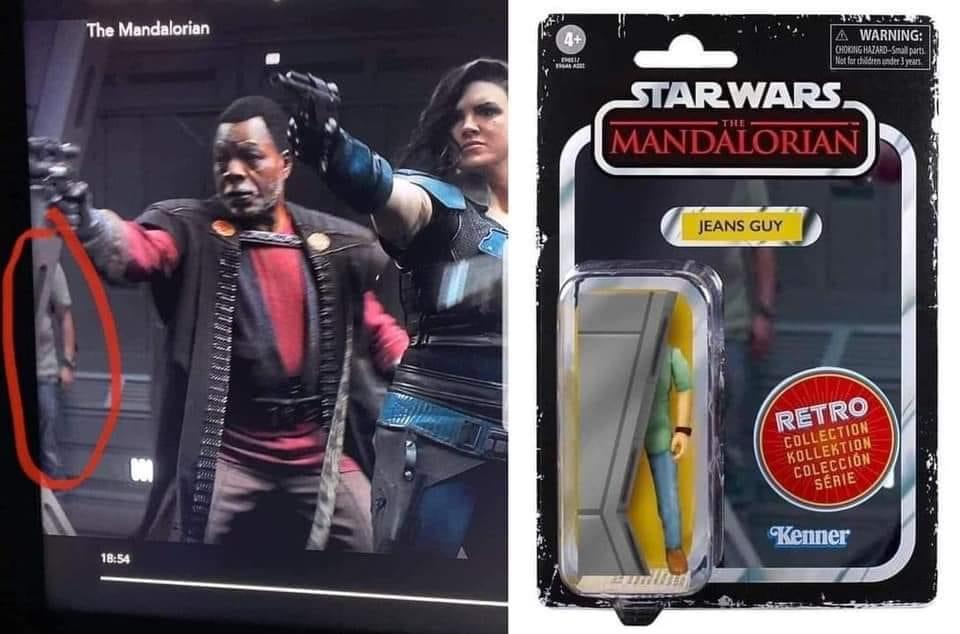 A Disturbance in the Force : How the Holiday Special Happened (forthcoming documentary)
https://www.holidayspecialdoc.com
Trailer = https://vimeo.com/476487442

https://starwars.fandom.com/wiki/Duck often gets the nod.

The recent E.K. Johnston “Queen’s Peril” novel lead to the creation of the official Wookiepeedia entry for Menstruation.
https://starwars.fandom.com/wiki/Menstruation

Grant Masaru Imahara was born October 23, 1970 in Los Angeles, CA. He grew up in Southern California and was raised by his mother, Carolyn Imahara. As a child, he demonstrated profound curiosity in how things were made, and loved to spend hours building with Lego blocks. By age five, Carolyn recalls, Grant’s grandmother gave him a little screwdriver, “So that was the end of any complete toys, he took everything apart.” Grant first knew he wanted to be a roboticist after his mom took him to see Star Wars in 1977. He was enthralled with the heroic characters R2-D2 and C-3P0, and his attraction to the droids would prove to be an ironic foreshadowing of Grant’s destiny.

Grant would have been 50 this year.

A possible lead on a Hebrew Audio version can be found in this Empire video clip:
https://www.youtube.com/watch?v=cas-B-CGnLk
In the information of the video they note “Hebrew - Azgad Yossi”.
The audio sounds like a clean recording, not a traditional international audio where they dub over the movie. Don’t know at this point if there is any more to it.

In a few years if your nephew is still into it, can go down this worm hole of Vader’s chest plate fonts:
http://www.erikstormtrooper.com/sithprophecy.htm

Harmy’s version is compatible with ‘Project Threepio’ which is a collection of Subtitle packs in different languages for the Star Wars films and Hebrew is available. More information here:
https://originaltrilogy.com/topic/Project-Threepio-Star-Wars-OOT-subtitles/id/13794

If, in the future, this community does learn of a Hebrew audio version it may be discussed in the ‘International Audio’ thread:
https://originaltrilogy.com/topic/International-Audio-including-Voice-Over-Translations/id/14451/page/1