Sounds like a LOT of work there, Rob. Thanks again for ALL you do!

I’ve taken the 4k edition with dnr, but there is an issue with vlc accepting the format (the soft crashed after a few seconds). Any advice on how to play it with a computer ? Thanks in advance !

I’m in the process of downloading the final version for a last minute check. So, a release is imminent. 😃

Sounds great. Looking forward to it!

Dre. Did this project get finished, and or released yet? I was on vacation, but let me know if I missed some post that I don’t find here.

^ Looking great, Dre! Can’t hardly wait. Thanks for all the hard work you all put into this!

Thanks for the tip, “stretch009”, that PotPlayer is indeed a very nice Media Player!

Okay, here is the sandcrawler, I happened to have it loaded.

Um…This is the door of the Tantive IV Poita. But would like to see the Sandcrawler.

for the record i can’t stand the special editions lol

i just like the other non-prequel films and it bugs me if SW77 is the only one without the episode number, plus that original crawl DOES look off to me because it’s not what my vhs had.

i certainly understand preferring the original though, and the value of historically preserving it. it just sucks cause i feel like people either fall into “don’t care about the changes”, or “only want the original theatrical 77 version” and it’s tough being not QUITE in one camp or the other when the ONLY change I like is the 81 crawl

It probably has the words staying on a bit longer, and slowly fading out once they are very far away, I presume?

Congratulations on getting an attentive audience, Mike!

I can only hope all goes well for this getting future recognition, and a possible release.

I wish someone with really good skills would recreate the original '77 Opening Crawl. The 4k77 is fairly good, but it’s missing the proper “words fading out” as seen in '77. It’s very similar to how the '81 looks, but obviously doesn’t have the “Episode IV” or “A New Hope” wording in it…among other things.

Anyone here interesting in re-creating it?

Here’s what the color grading would look like without the technicolor green cast: 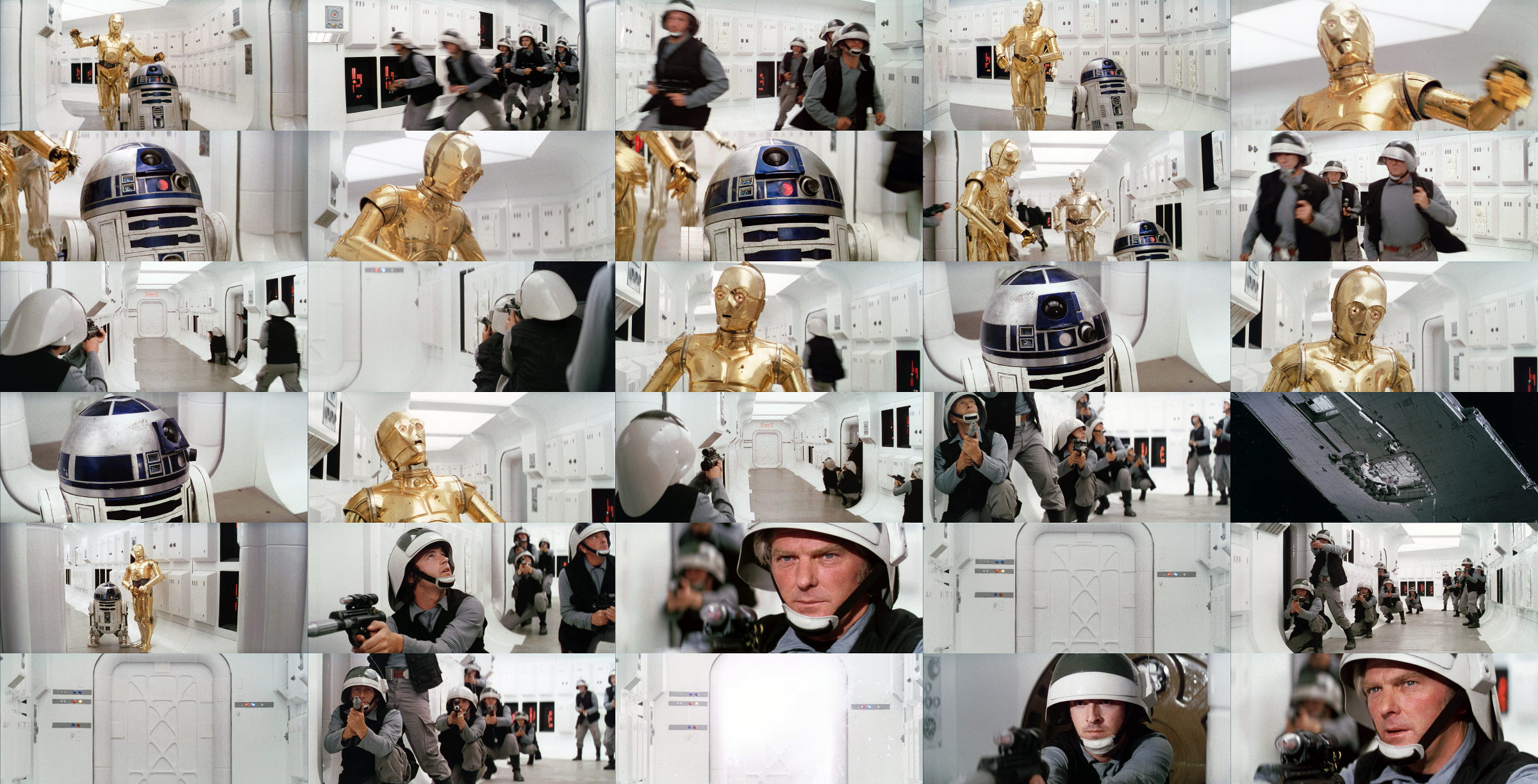 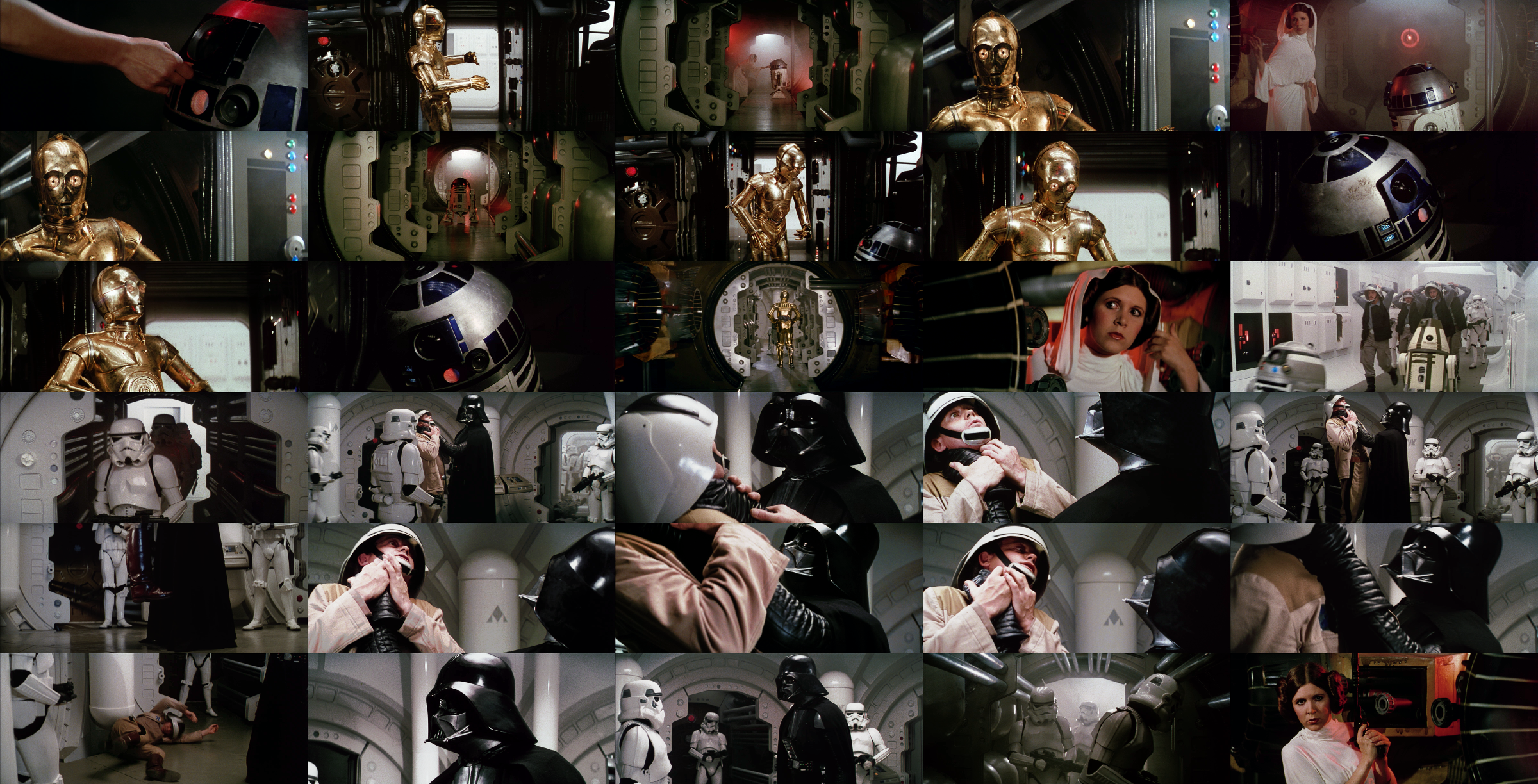 And what’s your opinion on how it looks compared to your other Lut that doesn’t eliminate the green cast, Dre?

NeverarGreat’s version was not foolproof. Tech prints of Star Wars generally had a lot of green casting, especially in the dark areas IIRC. That shot may be an anomaly from that specific print, but even then, it would be generally accurate.

Oh no…I’m not saying that NeverarGreat’s is perfect, it may have its own “flaws”, but IIRC, it’s closer color and gamma-wise, to the theatrical version that I saw in the summer of '77, than the current ungraded 4k77. I however, had not see a Technicolor version until project 4k77, but find it suspect that it is cast with so much green, and believe that it was more of a mistake in rendering, than how it really should look. But I am thrilled that Dre can make it look so good with his Luts, if the rendering proves this to truly be how a Tech Print really does look.

Well, the Tech print is going to have a green cast just because it’s a Tech print, and the 4K77 colors are meant to show what’s on the print, green cast and all.

Yes, but it has more than just a ‘cast’ to it. Something went amiss, but it was caught:

This is from NeverarGreat’s Tech V1: 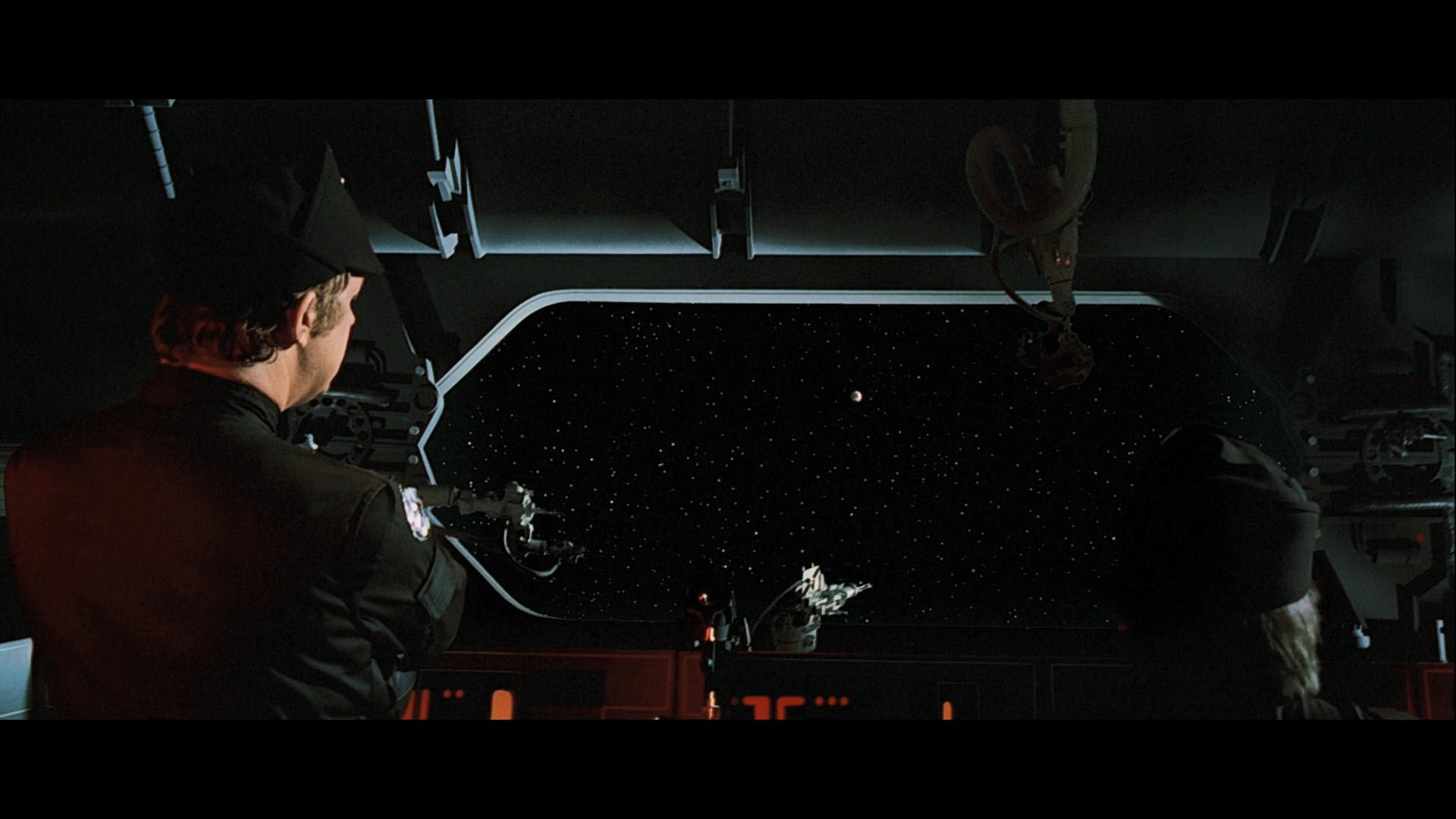 Anyway, it looks like Dre’s Lut fixes this. Dre, is there any chance you can show us this particular shot, using your new Lut?

I didn’t say that I don’t see that there is green. There is plenty of it in some shots. Just clarifying that the idea that it is an error or mishap is your own personal assessment, right? It read as if there might have been multiple people discussing/confirming the mishap on the other forum, but you meant that you also brought up the idea there?

As far as the pink goes, yes, Dre does seem to be suggesting that there is an error with how his LUTs were applied or rendered.

I think that I may have been the first to write about the green cast on the other forum, yes. Rob stated that he may have “disabled the wrong layer and accidentally output the the wrong version…” I am not accusing Rob of anything, I just made him aware of the green cast, and now I myself see the pink in there as well. It looks like Dre’s new Lut here may have taken out the pink and perhaps the green as well?

Interesting. So there is definitely not a mishap where it’s too green. Would appear slightly greener, if anything.

Interesting indeed, that you don’t see a green and pink cast to this shot, and many others in Reel 1?

However, I do believe there was an error, or mishap, and too much Green Cast is present in the current 4k77, if you look at the current discussion on the Other forum.

^ Keep up the good work there, Dre! 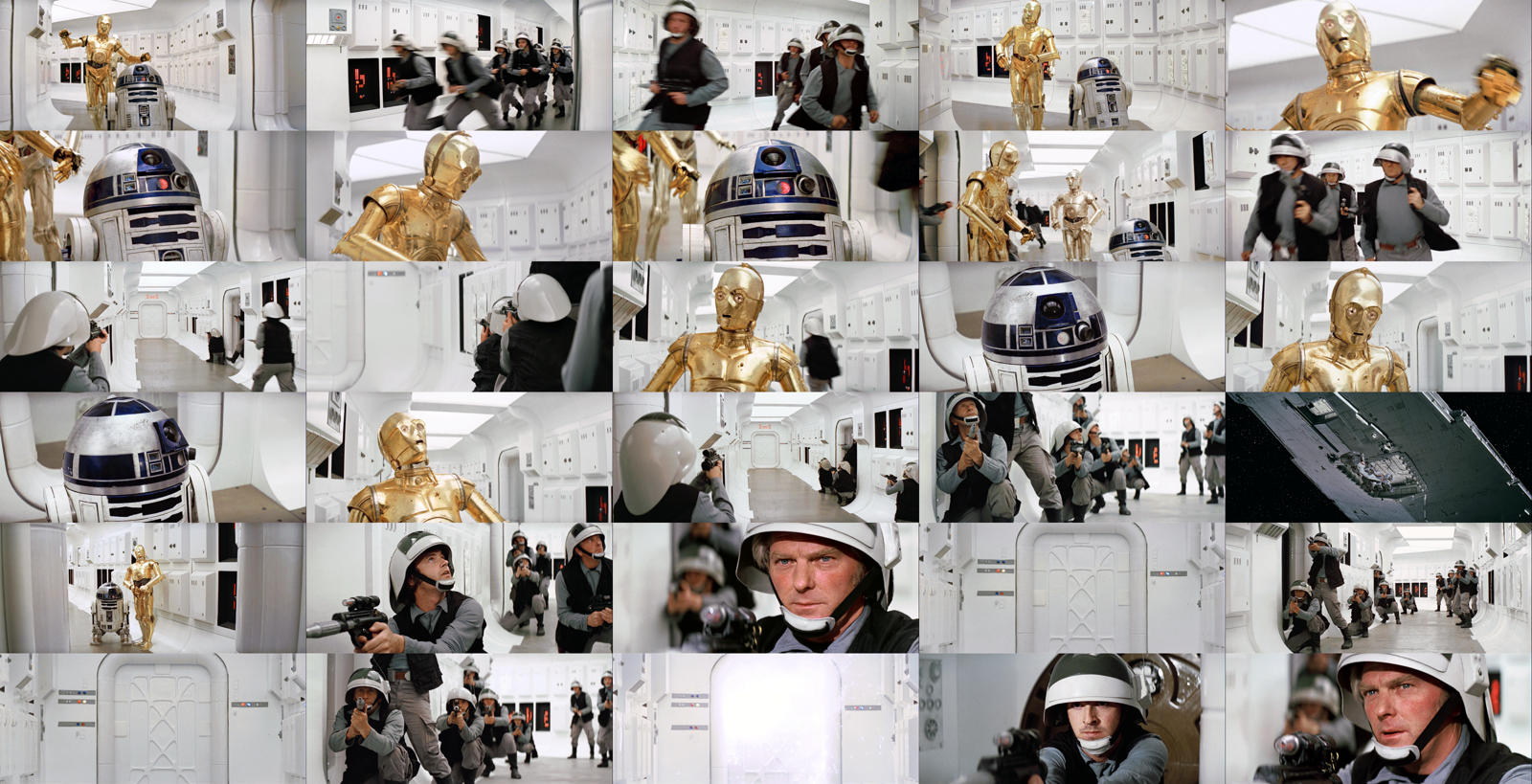 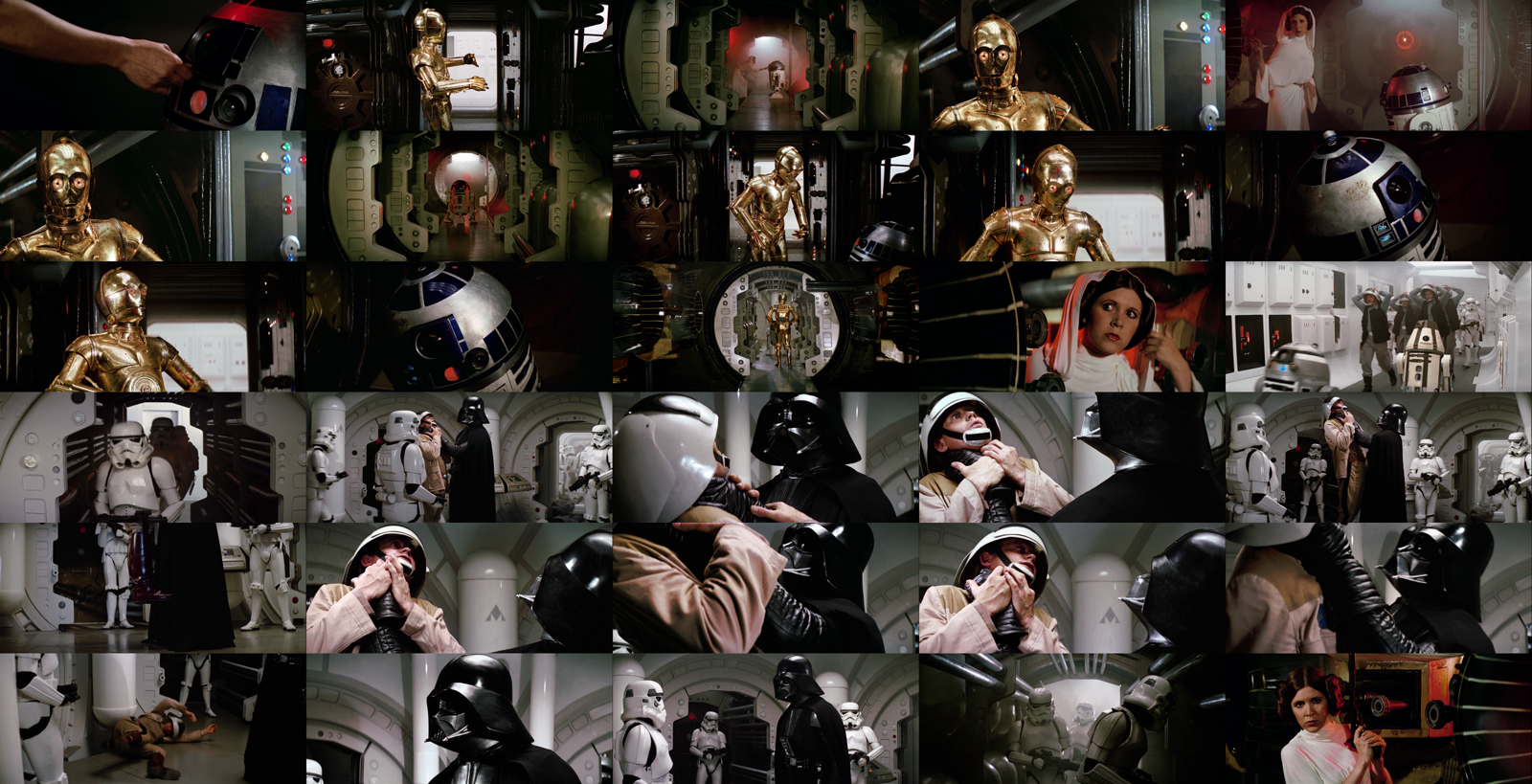 For me personally these contrast settings look a bit more film like to me, but nothing is set in stone. The contrast settings are inspired by Mike Verta’s samples, which are a bit darker than Neverar’s settings, although not much. Adjustments may be made once I’ve looked at it in motion.

Yea…I got you, Dre. I’d just hate to have you go too dark and lose detail in some of those interior shots. Once you go too dark, you can’t regain the details you may have lost, but I’m certain you already know this.

That’s gotta be from 2.7 right? I remember his technicolor grade to be a bit warmer.

Compared to the Blu-ray, my version is significantly brighter and warmer, an interpretation of the Tech film as it was captured in the neutral light of the scan. Dre’s version is closer to a 70’s projection.

I really like your Tech Version, NeverarGreat…especially the Gamma/Brightness/Contrast settings, but the colors are Very nice as well. IMHO, if Dre can match those settings,(GBC) that would be Spot On!

This is a great thread, Dre, and I’m really looking forward to your Regrades…as always! Your progress really looks nice already.

Is there a way that you can put the Rebel Soldier Closeup from Neverar’s Technicolor version right along side of your edit? I’m at work right now, and don’t have that compatibility, but I’d like to compare the two, side by side, maybe even put the Raw 4k77 in there, perhaps, as I found his version to have exceptionally good colors in the Tantive IV scene.