I believe Fast Times at Ridgemont High had some changes as well. Some home video releases had different songs due to licensing but I think this was resolved by the time the film made it to DVD. The surround mix first introduced on the 2005 DVD had some minor effects changes I believe. That DVD as well as the BD does not have the mono. The original DVD and the High School Reunion DVD as far as I know has the correct original mono!

It’s me Pete 1972! You remember when we commented on the Jaws videos? Looks like another film is getting the audio revisionism treatment. According to Digital Bits and some fans, Batman 89’s Dolby Atmos mix has a lot of changes with the sound effects. Gun shots have been altered and the starting up of the Batmobile is changed too. Also Digital Bits said that the Dolby 5.1 on the 4K is a downmix and not the 5.1 that was on the previous Blu Ray.

Figures. (Rolls eyes) Apparently the 4K release of Blade Runner also has audio revisions though I’m not sure off hand what they are.

And yes I do remember you. Nice to see ya again!

actually the audio revisions on Blade Runner date back to when the 2007 Blu-ray was released, and the revisions are only on the final cut, the other cuts have the original sound effects

No I’ve seen comments on bluray.com that apparently more revisions were made to the Final Cut mix for the UHD release.

if anyone wants a download for the 4k jaws version, DM me, maybe someone can use it as a basis for the perfect jaws cut

Could you PM it to me as well as with the mono track from the UHD (if you have it)???

No, no one sent me the track however I am waiting til the new UHD is released to hear if it’s any different than the mono on the regular BD (doubt it since it’s still being provided as a DTS Digital Surround 2.0 Mono). I don’t have a 4K player but hopefully someone who does and gets the new release will chime in.

A few years later, is it still possible to get the synced mono audio from the Criterion LD? And will it sync with the new UHD release?

Even if they were willing to release the OUT I can’t imagine it happening so soon after the Skywalker set just came out. Disney+ maybe but even that’s stretching it but physical media?? Yeah not right after a big box set had just came out.

I really doubt it it’s even loyalty. I just think they don’t wanna do it plain and simple.

The single worst argument I ever heard was - and I kid you not - … “haha, those old 1977 special effects were so bad, just look at that scene of Han meeting Jabba.”

Parts are upscale , parts in HD. This is the new version that was done a while back for HDTV. They asked Lucasfilm if they could have the footage they used in HD and they refused, so those parts had to be upscaled. Most of the “talking head” footage is HD though.

Is this because they didn’t want to share HD of unaltered shots?

I was watching it the other day. I’m not positive but kinda looked like an upscale to me.

We know the interview you are referring to and technically the subject of the OUT wasn’t addressed. The interviewer asked about George changing his movies and said something like “you’re not gonna make more changes are you??” KK laughed and said “those will always be his”. I mean people can interpret this any way they choose but technically the future of the OUT was never addressed.

I remember a comment from a few years ago on a video about DeSpecialized and the comment was basically along the lines of “I don’t understand why you would want to undo the new effects and reinsert those older cheesier effects” or whatever.
Just a few months ago a guy on Blu-ray.com was talking how the updated versions are better than with the outdated effects or whatever. I had to reiterate that he was stating an opinion. His response was “It’s not an opinion though. The original versions have dated special effects and are dated over all, the new versions look far superior, even though they have some admittedly already dated CGI. I do wish Lucas would have waited until CGI was as good as it is now“. I once again reiterated to him that this was his opinion, not fact. 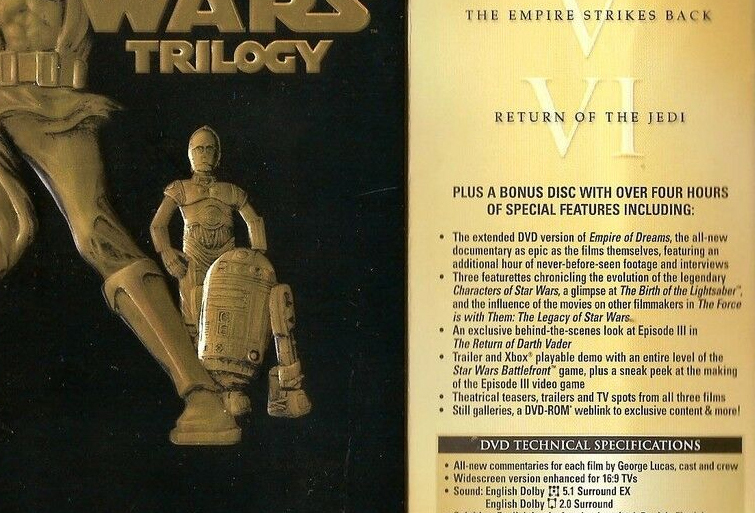 That had to be the retailer exclusive then because most places I saw that carried those sets had gold for FS and silver for WS (just like the ‘97 VHS’).

The upcoming UHD release will have the mono in both Dolby and DTS. Be interesting to see how they different.

EDIT: I was wrong. The mono is only in DTS.

plus the blu ray joins the 2 parts up so cuts off the music exit credits from part 1 and intro and recap from episode 2 the cut is quite jarring and spoils it.

Yep and the only way to get the complete uncut miniseries is the LD or UK DVD.

Sorry to go off topic but does anyone happen to have a spare Enhancement Archive Disc??? Mine started skipping.

Hmmmmmm I don’t trust this.

JEDIT: Just noticed the notice at the bottom of the article confirming it’s an April Fool’s Joke.

So ROTJ has trailers and tv spots but not the other two???