my theory is that Rey was cloned from Luke’s hand, hence why the moment she touches Lukes lightsaber she has the flashback back to cloudcity moments before Luke loses his hand

as a story teller and director I think his worst decision was to let the effects drive the story, I think this started with Return of the Jedi, by the time Jedi came around it was all about linking big effects sequences and that set the tone for the rest of the saga.

It is funny how big a deal they made about the character and then it was in the movie for maybe five seconds?

Don’t forget the whoopty-doo about C2-B5. He’s in the background of one shot for about two seconds. And yet got his own Sideshow and Funko Pop releases: he also was released as a Disney elite Die cast 6" figure, and he features prominantly in the new Scarif DLC for BATTLEFRONT

personally for me I think it was the best Star Wars film since EMPIRE, My jaw dropped at the sight of Tarkin and Leia, it was like seeing the 1st Dinosaur appear in Jurassic Park on the big screen for the very first time.
I enjoyed The force awakens but there were a few moments I winced at some of the decisions in that movie, I didn’t feel that with this movie. I didn’t notice his name in the credits, but did Jeremy Bulloch make a cameo as an Imperial officer towards the end? I’m really looking forward to catching more easter eggs with repeated viewings

I think it could be interesting in episode 8 to see the parallels of Luke training Rey / Snoke training Kylo, Dark vs Light

This seems like as good a place as any to speculate on the upcoming films. I saw The Force Awakens for the 3rd time this morning and I never noticed this on the first 2 viewings, but the scene at the end where Rey meets Luke for the first time, it would appear that Luke is standing in front of a make-shift grave and there is a flat slanted stone that looks like it could be crude headstone. Could this belong to a Mrs Skywalker? or Rey’s mother ? or both?

I agree, second time was the charm for me, the little nit-picky problems I had on the first viewing didn’t worry me second time around and it was a much more emotional experience. Its the first film in years that I’ve wanted to see more than once on the big screen.

I didn’t imagine that Han called Kylo “Ben” did I?

so now that the release date has finally arrived depending on your location, is it ok to freely discuss the movie in this thread?

I saw a midnight screening last night and it honestly felt like the film I’d waited 32 years to see, it was everything I loved about the original STAR WARS, and it was clear that JJ and co had gone to great lengths to recreate the feel of the original trilogy .

There isn’t much that can be said without getting into dangerous spoiler territory, but If I had to pick the film’s weakest point I would have to say it was the design and execution of Supreme Leader Snoke, I guess we’re going to have to wait for 8 & 9 to delve into his background and learn more about him, but visually he came across as a Palpatine/Voldemort/Gollum hybrid that looked more at home in one of Peter Jackson’s LOTR films, not sure if that was Serkis’s influence but I just found the reveal of a character that they hid for so long in the lead-up to be ultimately a bit of a let down. The concept art looks far more interesting than what ended up on screen.

but overall this is the first film in years that I think I will go back to at least another 3 times to see it in the cinema.

Obi-Wan saw Luke's potential and set his journey in motion, but still blamed himself for Anakin's turn to the darkside, had he lived he probably still would have taken Luke to be trained by Yoda in the deeper ways of the force.

I guess they're trying to keep the original trilogy cast under wraps until the release, but Chewie seems to be everywhere as far as T-shirts and Toys go, is this an indication of his prominence in the movie?

This is allegedly the TFA Luke action figure:

I'm not seeing anything about it on any of the regular sites, though, so I'm not sure if it's legit. It looks great, though.

Frankly, it looks too good to be real. The Black Series' quality has dropped exponentially since its inception. This thing looks to be several orders of magnitude better than the other TFA Black Series offerings, so I'd say it's probably a well-done custom.

I thought Lucasfilm had to wait till Cushing had died before they could even release a Tarkin action figure in his likeness, is his estate a bit more flexible with his likeness?

is it possible that the hooded grey lego character is the Max Von Sydow character?  there has been rumours that he is part cyborg and a former Imperial , as well as the leaked concept art of a hooded cyborg holding Vader's charred helmet, that many believed was Sydow's Character, and he is rumoured to be Rey's guardian.

to be honest, I'm not entirely sold on the creature design we've seen so far, they look a bit too 'Farscape -y'  its a big galaxy but a few familiar species wouldn't hurt

Only other major thing is Domhnall Gleeson plays Major General Tarkin, a clone of the original Tarkin. It's rumored he dies in the film but will obviously implied he could be cloned again.

they really are going out of their way to emphasize the REAL LOCATIONS, PRACTICAL EFFECTS, PHYSICAL SETS , REAL ACTORS in Rubber suits as the creatures, every shot in that Comic-Con clip has got to be a virtual slap in the face to everything George did with the prequels.

We finally get our first glimpse at Leia, I have a slight suspicion that they won't actually reveal Luke before the movie is out, especially if there is even a hint of truth  to the rumours that he doesn't appear until the final act.

I'm sure there's already a book about it.

naturally Chris Pratt's name gets bandied about a bit as a replacement for Harrison, but while I'd be happy to see him don the fedora as a new Indy, there really is only one Han Solo

The thing that scares me the most is that Han was around 29-30 years old in the original film so to realistically recast a younger version they'd have to set the story at least 10 years before the events of A New Hope,  i.e late teen to 20 year old. Too young and immature to be the cocky, cynical rogue that is the basis for his character, and I honestly have no interest in seeing his formative years. I really don't see him becoming 'Han Solo' until well into his mid 20's.

I do remember reading that they were having trouble developing a Boba Fett vehicle because of his anti-hero status and there were worries how they could make him the protagonist without ruining his character in the original films, maybe this is their way giving Boba Fett a major starring role with Han Solo as the focus.

strange you have a problem with the lightsabers. I remember they did a small Youtube feature in the lead up to the Rebels premiere where they discussed how they painstakingly tried to recreate the look of the sabers from the original film.

it'll be interesting to see if the upcoming comic series centers around the Battle of Jakku, The New Battlefront video game is also releasing The Battle of Jakku as  a free DLC campaign  just before the movie hits

30 years leading the Resistance, she looks more like a General than Royalty,  I can see that happening

Perhaps some off screen moments are best left to the imagination? 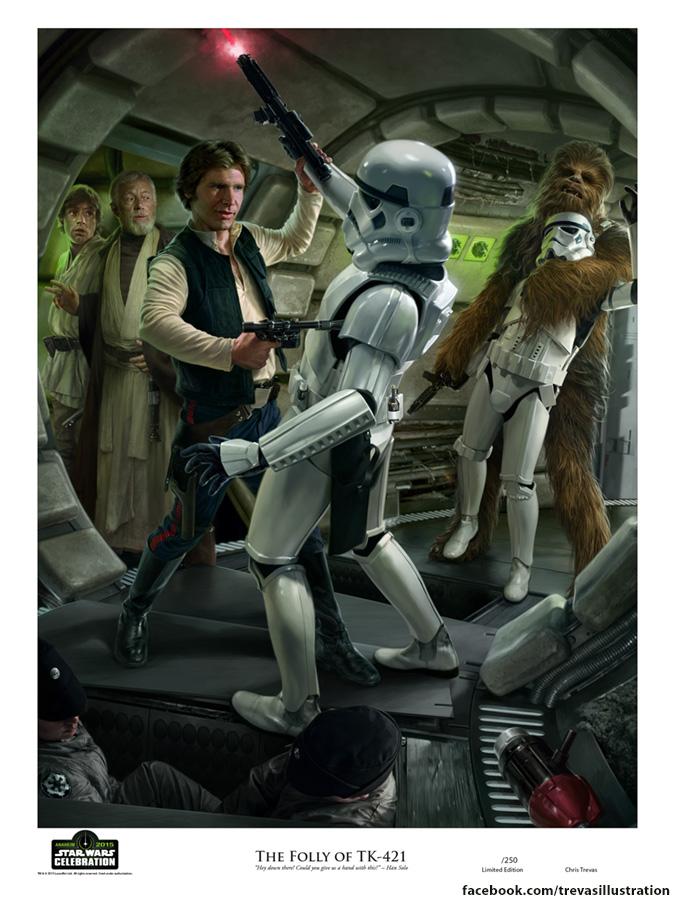 funny, never considered it before , but when the Falcon escaped the death star there were probably four dead or unconscious imperials aboard that they had to dispose of.