Maz’s ownership of the saber was something I was trying to figure out at some point, and thought it could work to have it be part of Rey’s vision in the previous scene. I abandoned the idea since I thought it would disrupt the scene too much, but here’s one way it could work:

Obviously just a mockup, but all the elements are there and I think it may actually add something. Leia’s ‘Bring him home’ could refer both to her later line regarding her son as well as instruction to Maz to find Han and bring him back to her, Maz being a trusted confidant of both parties. Or it could even refer to Luke, since Leia could have deputized Maz into the Luke quest at some point and thought giving her the saber would help somehow.

I really liked that inclusion Nev and it makes a lot of sense of how did Maz get it, it blends very well also👍.

Another change: “Despecializing” the scene of Vader walking through a dark corridor on the Death Star. In the Special Edition, they terribly attempted to fix it by tracking and hand-animating a 2D image of Vader’s face, chestplate, buttons, codpiece and leg armor in an attempt to make him more visible in the scene. This resulted in perspective errors in the mask and garbage mattes around certain areas of the armor.

I decided to just mask in the D+77 source through and fixed it to it’s original form. Although you cant see much of Vader, I feel it makes him more mysterious in the dark. 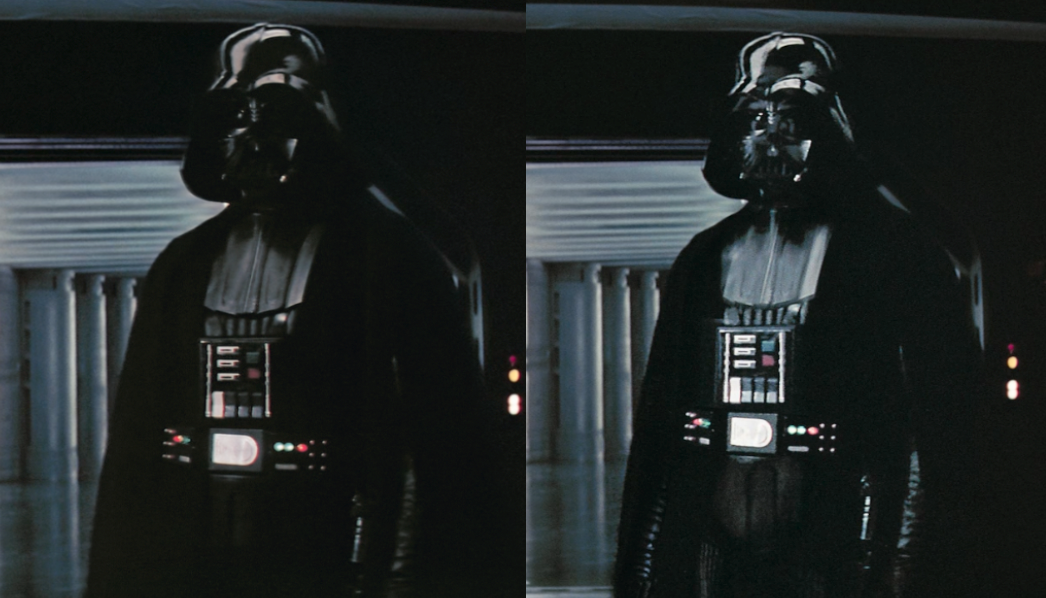 NOTE: I changed the edit title to “DSG Special Edition” to more elaborate that this is a SE/Adywan style edit, so sorry for the frequent name changes.

Wow looks awesome Dat’s, I had never noticed it before but wow that’s much better now👍

I always thought the same as G&G Fan regarding the praxis rings but after reading what Hal and Dat’s reason’s I see why. The rings should definitely be kept for the Death Star explosion 👍

I was considering forking out for the Mandalorian classic figures just to have on the shelf in my man cave but don’t know if I can justify the amount. It really is crazy, I would hate to be a kid in these times.

Sorry to hear that Captain, please take care of yourself and family.
All the best
Atom-88

Sounds very interesting, just out of curiosity do you plan on doing a 97SE edit as well.

😳😮these clips look awesome That Guy, I honestly can’t wait to see your finished edit.

Just out of curiosity and I’m sorry if this has already been asked or suggested earlier in the thread but Hal have you thought of changing the name of TROS to something else? similar to your PT edits.

Once again sorry if this has already been asked.

Anyone Have kk650 Regraded Original Trilogy by any chance?

I would also be interested in a link to that version.

They are available on 1337x site
Their available in small and large file sizes.
Hope this helps

I’ve been combing through the behind the scenes footage, mainly because I’m hoping to incorporate some extra shots into the Kijimi sequence. As I was going through though, I also went ahead and pulled every other shot I could find that might potentially be added somewhere in the film with minimal touch-ups. I know some shots have been considered or even included in Ascendant already - and the shots that remain likely won’t work for any number of reasons - but I thought it might be worth looking through them again with fresh eyes. Maybe add an extra landscape shot or two on Pasaana? More footage at Leia’s funeral? An extra shot on Endor? I dunno; I’m just looking for more ways to slow the pacing.

I rendered it as uncompressed to preserve as much information as possible, so the file’s kind of large.

Does anyone have xxtelecine 7xx OT edits.

For me it’s 1,Freddy v Jason, 3, New nightmare.
I can’t honestly remember the last good horror I saw, shame that the industry relies on reboots soo much these days. HUGE NEWS!
I’ve just finished downloading skydude’s 4K77 DNR and it looks WAAAAAAAY better than 4K77.
the quality of Gout restored will now be on a new level. So this is going to be the main theatrical source now. No more 4K77 DNR.

That’s some awesome news That Guy, really looking forward to these 😁.

Ok so much like your TFA edit I gave this 2 viewings, the second viewing was mainly for just taking notes for feedback.

Right before I go into details I would just like to say that the first time I saw TLJ (Official Release, not Fan-Edit) my reaction was not great to say I was disappointed would have been an understatement and any hype that TFA had made was quickly gone and my returned passion for Star Wars just died (The PT killed it first but TFA had me hooked once again and it felt like I was back in 1999 for that brief moment).

So Christmas time 2019 a friend showed me what was being done here at the OT site and when I seen what the fans here were able to achieve 🤯, for me personally Hal 9000 saved the PT, Harmy did something incredible, he removed all the things I hated that the SE brought which then brings me to TLJ lol. (Sorry for going off track there).

So needless to say I wasn’t a big fan of TLJ but a few people at the OT site showed me that not everything is as bad as it seems, from FGR, Hal 9000 and Poppasketti all managed to save what I initially thought to be unsavable. With each of their edits there was always something different they did compared to next edit and I loved each one which now brings me to The Legends Edit😁.

As previously stated I have not read or seen anything Legends related (Other than your TFA edit of course) and OMFG🤯, No… No… No… This is not TLJ it can’t be, why could we not have got if not this but something similar officially released, you somehow managed to make this edit not just enjoyable but holy s@#ts it felt like I was watching something completely new.

Things I loved:
(Warning as there Spoilers)

Things I won’t say I didn’t like but maybe worth rearranging (keep in mind that I have not seen anything to do with Star Wars Legends so what you are achieving won’t probably work out l but just my ideas anyway).

Sorry this is very long winded, I absaloutley loved this edit and it honestly felt like I was watching something new to what I had previously seen and this felt like what it was meant to be a Star Wars movie.

Thank you once again Acbagel for sharing this absaloutley amazing edit with me.

I’m going to give TLJ a second viewing hopefully this week.

I will say I was very nervous leaving the feedback because I know fan-editing is a serious passion and a lot of work and dedication goes in to the work that you guys/gals create and I know I wouldn’t take criticism very well lol.

Thank you once again Acbagel and take care👍

Take all the time you need.

Would be awesome if you remove

Maybe a version with serbastian Shaw and another with Hayden Christensen.

That’s all I can think of for now.