Wow just checked the trailer out and this looks amazing, I love some of the ideas and am looking forward to seeing this once released. 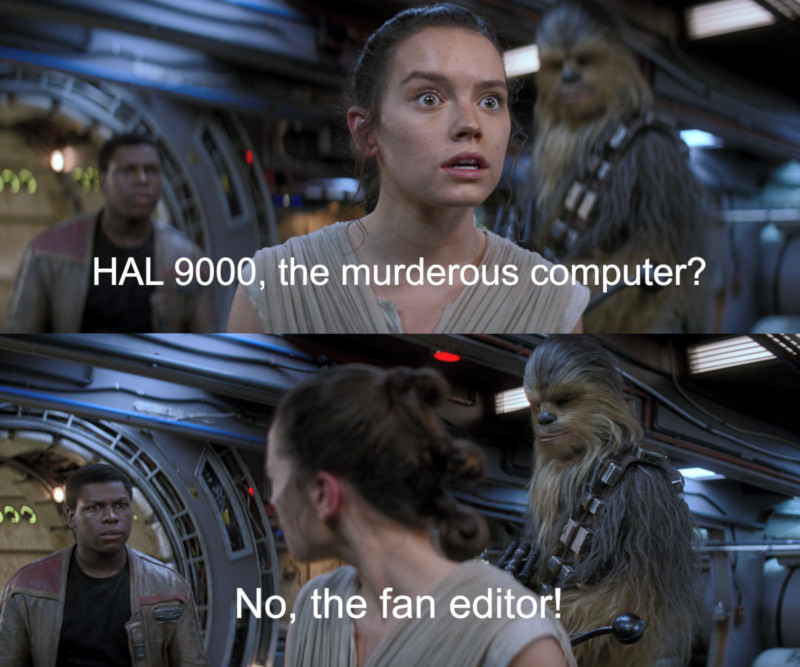 Hi guys, not to throw a spanner in the works but Jedi aren’t allowed personal possessions perhaps that’s why Obi says he doesn’t recall owning a droid also in the PT in Episode II he uses R4 and in the beginning of episode III. Just my 2 cents anyway, I love your Special Editions that almost wasn’t but then was and they are my go-to even over Adywans 😮, sorry to upset people with that one but it’s true.

Hi mate, hope you and your family are all having a lovely Christmas.
Ok so as promised I finally gave V2 a second viewing, I found it a big improvement over V1 bit there were things I still didn’t quite like.

The things I loved:

Ok so now for the things I wasn’t such a huge fan of.

All in all very good work mate👍.

Thank you Hal, this is truly an amazing edit and achievement. Thank you for sharing, Merry Christmas to you and your family.

Merry Christmas everyone, hope you and your loved ones all have a safe and wonderful Christmas.

Much love form Atom and Family.

I think the colour correction looks a lot better than the comparison shot, so I would say they seem just right mate👍.

Good to hear Eyepainter, would love a link once completed 😁

🤣🤣🤦Don’t give them ideas Cap

Oh wow! I was gone to get some food and video games to come back and find out that I’ve helped out a great deal.

I was only bringing something to mention, but I’m real glad I actually did something good for the edit. Your welcome, everyone!

You have brought hope to those in the galaxy that had none.

I just finished Episode II and if I said I liked both Episodes I & II I would be lying because I loved them and even tho I have seen the series certain scenes still give me goosebumps lol. The scene layouts, cut transitions, everything just flows so smoothly and beautifully. As much as I love the series I can’t help wish that we got these officially released instead. Absaloutley amazing work Smudger, thank you for sharing them with me.

Thank the maker and Master Lawdog🙌

Sounds good to me also👍😁

The new colour grade look really good and so much better especially with the blue tint gone, looking forward to seeing this edit👍

Yes, Kylo is getting played, but that is what you’d expect. That is what Palpatine is known for. He played the Jedi Council and the Senate, too.

Ohh wow I will admit I was very skeptical about cutting the droid factory until I just viewed and I’d say it works very well.

I don’t see them as Diet Hal, without your hard work we wouldn’t have half of what we have. I haven’t been around the forums as long as a lot of you but have seen enough to know that almost all editors take inspiration from your edits and even use them as their main to work off.

As for TROS this seems to be the fan bases main thread.

However, showing his ghost is the natural capstone on his redemption story. Without it, it leaves the audience to say, “Oh, well. I guess he’s in Jedi hell.”

Ohhh wow only now catching up with this thread Anakin, some really good ideas👍

Very good good work Eyepainter 👍, I think your version works much better as we don’t need to see too much of miles typing away as we already know he’s doing, really looking forward to see what else you end up doing with this👍.

I would also love to check this out please. Thank you in advance👍

Take 2 on the full “Captain Hux”. Does it sound any smoother?

Really excited to see this one😁, hopefully get to watch TFA edit tomorrow 👍