Irvin Kershner is overrated for his work on ESB and is not the reason that movie is so good.

Can we get an update on this?

Not to mention, I don’t like Axl Rose’s voice. I think it is grating.

I’ll remind you this thread is for unpopular opinions.

I feel it’s more about authenticity, less quality. Though I don’t think we reach ‘what could have been’ territory without a disappointing result, grass is always greener etc, the emphasis has been on auteur theory (of which Lucas himself believes). You can still like one thing better than the other or find another artist who personally takes the risks you like to see or achieves your idea of a satisfying result, it’s true even auteur theory doesn’t define or determine good or bad, but for some of us and now maybe even more after TROS that’s the vision we rather would have seen, for its authenticity, quality not guaranteed.

How is Star Wars being originally intended for children up for debate?

JJ: She’ll make 1.5 billion before streaming, she may not look like much but she’s got it where it counts, kid. I’ve made a lot of special modifications myself, but we’re a little rushed so if you’ll just get on board, we’ll get out of here.

Is it time for a new thread? Seems to be getting more into comparisons between the whole saga now, less specific to TROS. Think it’s a good time for that since the dust has sort of settled.

Interesting thought, Anchorhead, the animation style sounds like it would make a nice harmony between the CGI Clone Wars and Genndy’s stylized 2D version.

I wouldn’t call it a special edition, this site is so hair trigger on anything that could be designated a change I think we miss the forest for the trees, if Lucas was only ever removing the garbage mattes I don’t think this conversation would even be happening. Fan-edit seems needlessly harsh too, Mike himself has changed his own view on alterations to very minor effect shots he’s decided to instead preserve rather than fix even when preservation is a lot more time consuming and counter intuitive than a fix. It’s much more of a true remaster.

I think there’s some sour grapes on here because we don’t have access to Legacy, but this is more than a decade of work and it has been a labor of love, I’m not comfortable brushing aside all that dedication and effort as MV just doing whatever he wants, he could really be much less considerate if it was the case that he was exclusively altering to personal taste.

There’s still two other films in the trilogy that are completely unrestored now. Do we just only have the restored Star Wars and that’s it? Where do the other two restorations come from? How long do people have to wait to get them? Who is paying who to do them?

Star Wars is the real problem, there’s a reason it’s taken the most effort to restore, doesn’t even compare to the work put into ESB and ROTJ, there’s despecializing and there’s restoration.

Did they force heal Luke’s X-wing?
I just had to suspend disbelief and not think about stuff like the ship being under water for 30 years. Or his door being made out of parts of the X-wing. The door Chewie tears off its hinges.
Or Anakin’s Saber magically being made whole again.

I still really enjoyed the movie.

Apparently according to the novelization Rey repaired the ship from parts of the TIE Fighter.

What lovely symbolism, too bad it’s not in the movie…

It’s not that I dislike the title itself, but since you now have to say SW77 or SE97 or whatever I’ve grown to be annoyed by the whole mess.

I guess it’s partly because it goes into the pile of revisionism that this site is against but I was kind of surprised how few people here like A New Hope, it’s actually one of my favorite titles out of all of them, so humble for a space epic, if it was a generic sci-fi b movie they would have called it something dumb like Death Star, I like how whimsical and fairy-tale ANH sounds, just very clean to me.

Recently watched TPM on mute, I appreciated it a lot more just by taking it all in visually, so much great design and I could follow the story pretty well despite having not seen it in a long time. I’ve heard another good thing to try if you hate the line delivery is to watch the prequels dubbed in a foreign language with subtitles. Moments still took me out of the movie but they were fewer and farther between, the acting is the biggest fish of the problem, that improves with each prequel.

TPM also I can understand feeling underwhelming to those who really would have preferred to see the characters they already loved in an episode 7, instead it feels like the pilot of a tv series or like the first or second Harry Potter. So it feels like a rejection of the new characters made worse by wooden performances and an overall resistance to change leaving a bad impression. I can admit I just didn’t grow up with these movies first and it does influence my bias, but I’ve come to welcome the prequels to the table when I consider the generation that would actually grow up watching 1-6 in order and don’t have an implicit bias. Anyone is allowed to ignore them but I don’t really think a Gungan is dumber than an Ewok. The way I remember the theatrical releases most people at the time were confused by the sleeker ships and droid technology, and that they wanted to cut to the chase and see Anakin become Darth Vader. But it starts lighthearted and slow and people got impatient. The OT is a classic many fans don’t want tampered with, for some that includes backstory.

Possibly more convexly shaped for the angle, but it looks even better in that candid photo than the 2010 shot! The lighting and color are doing a lot too, I would say just to replace the whole console with 2001’s like you say but I wonder how far that can be taken and if there aren’t trickier shots of Hal from other angles that would throw a total wrench in continuity.

Had a composer suggestion! Sergei Prokofiev has a nice Soviet connection, though I understand some works being in the ‘too famous’ category here.

This is part of the problem comparing 2010 against 2001, it just looks so cheap, look at that chunky HAL it went from menacing to a fisher-price playset.

Here’s what I tried based on that base then trying to move it away from some of the blues in the shadows. 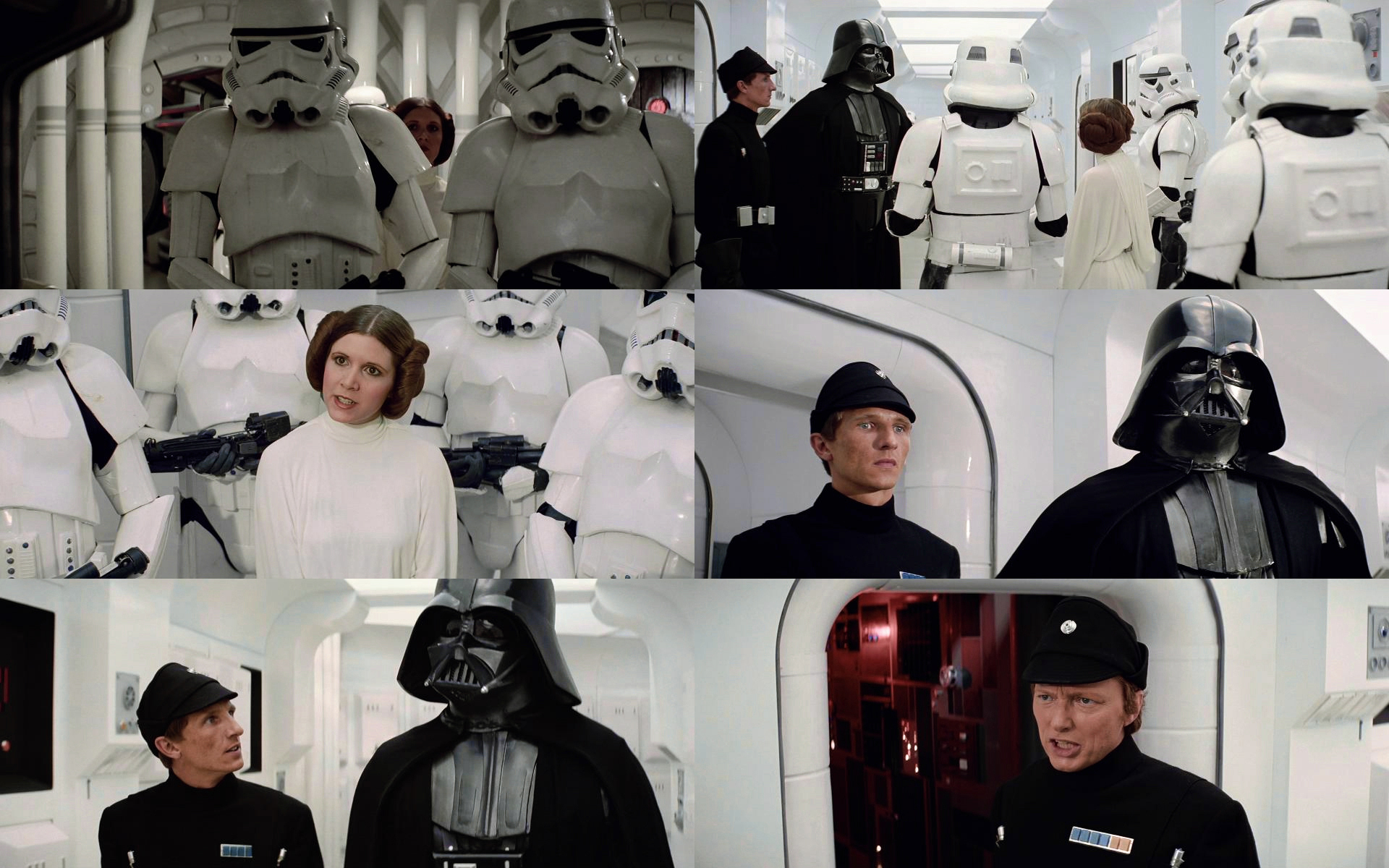 Hope Dre doesn’t mind adding our own passes, it’s just a lot easier for discussion than trying to articulate such slight color changes, I don’t post assuming my grade is better than Dre’s work, I know there’s mistakes, I’m not even working in 10bit, it’s all an iterative process.

Edit: Tried to push even bluer 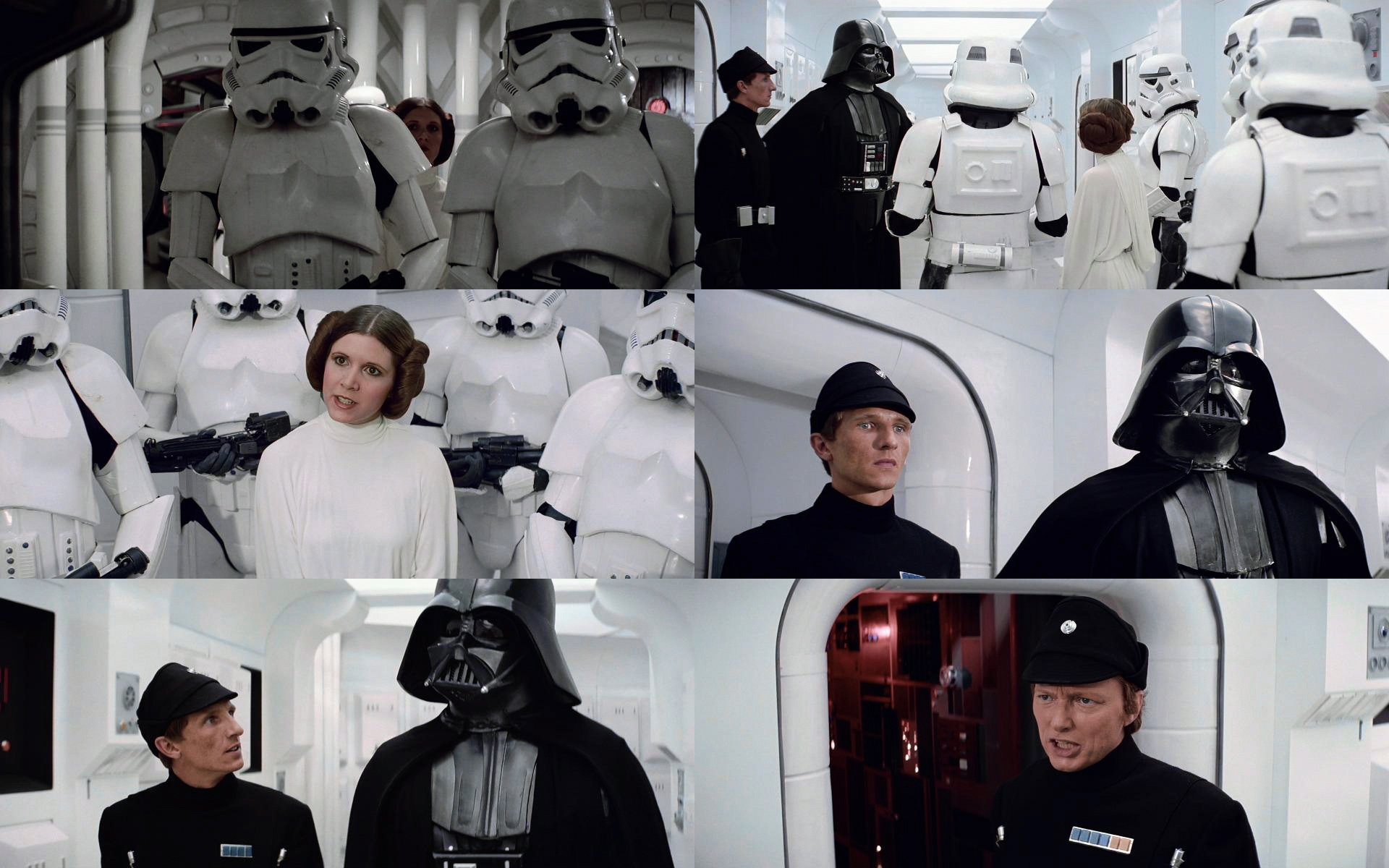 Excited for this, I’ve only seen one episode of The Mandalorian and it was the Bill Burr bottle episode so I plan to take in the season through this edit first as soon as it’s released, thanks for all the work everyone put in so far!

I am curious about some of the greens there in the shadows on the Derann print, it looks so technicolor even if the reds are a little too hot, is there any more saturation that can be pulled? The bottom right officer looks the most desaturated looking at the red and blue on his uniform.

EDIT: I may have gone too far in a few places… 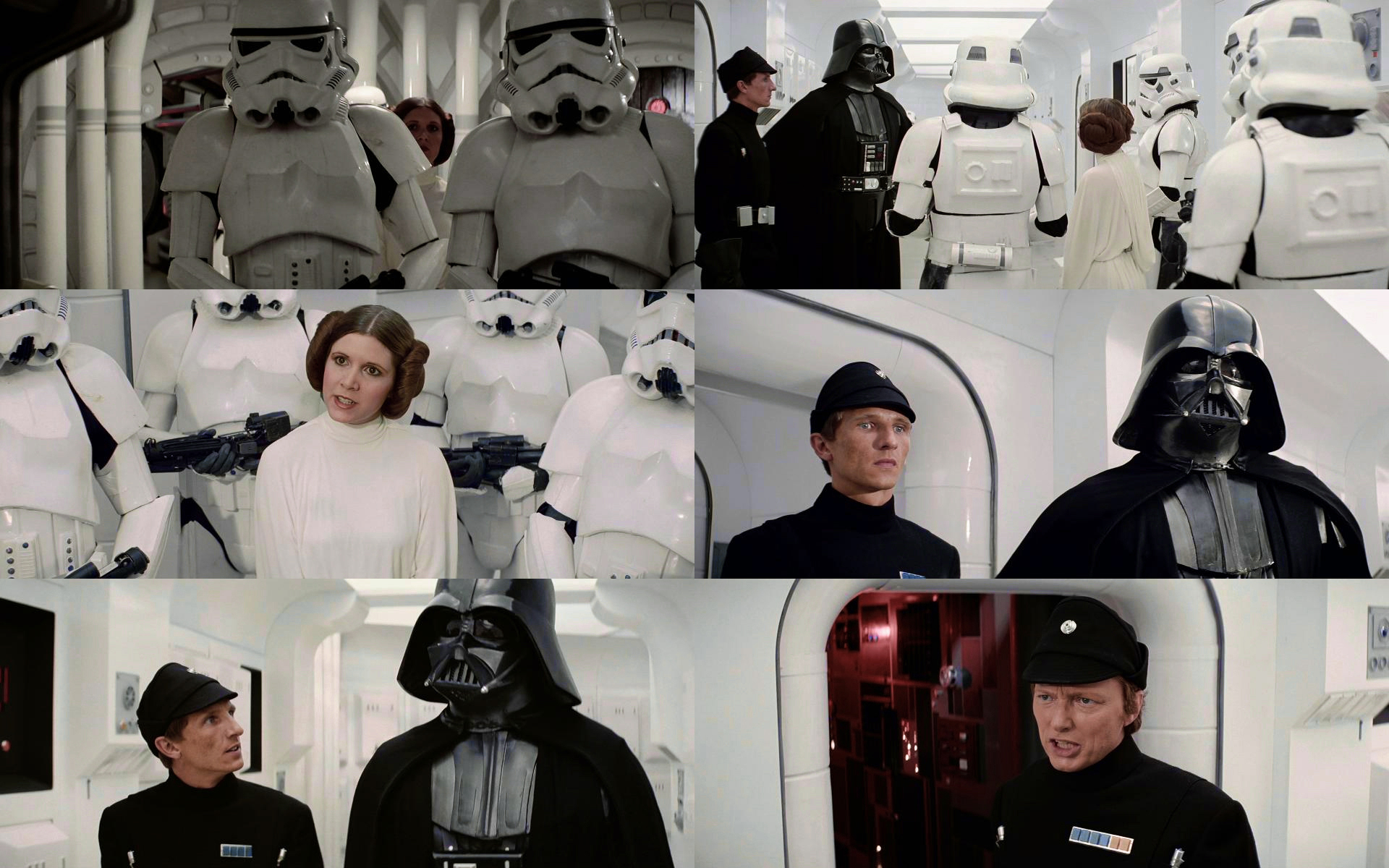 The movie should have always been Lando in the first place, Donald Glover was reaching the peak of his fame, all stars aligned, for those that don’t remember This Is America dropped the same month as Solo. The character of Lando is much more flexible and organic to make a prequel about than Han who is more narratively fixed and tightly married to the specific mannerisms of Ford that made audiences reject Ehrenreich’s interpretation as cheap imitation.

I really don’t have a problem with E.T. or Jar-Jar being childlike because both are for children, it’s much better to me than infantile ‘edgy’ characters that pander to 12 year olds as mature or dark like Vincent Valentine from Final Fantasy, or Carnage from Spider-Man.

My take on that is that JJ and Terrio rewrote and reshot so much that the scenes that ended up getting deleted didn’t really match the rest of the film.

This. I can’t think of examples off the top of my head, but I’ve seen deleted scenes from multiple films throughout my life that were clearly deleted, rewritten, and refilmed before the rest of the movie was set in stone, menaing that deleted scene no longer can function in any version of the film since the scenes that supported it (or that it set up) were never filmed.

That’s got to be the situation for RO, Solo, and TROS - these movies were clearly so much in flux during filming that most of the scenes that were cut are so incompatible with the remaining scenes that they probably start subplots that were never finished, or include characters that no longer exist (Matt Smith, anyone?), and Disney doesn’t want to show just how much changes happened during and after filming, so they just skipped on including any deleted scenes.

I imagine we’ll see them eventually. Once having demonstrable evidence of how much tinkering was actually done can no longer negatively affect revenue in a significant way.

This is how I feel too, it’s not so much that there is some alternative cut no more than DotF is an alternative movie, but what people are curious about are all and any potential changes made to the story.

I like your suggestion to use more Soviet composers to fit with the theme and Khachaturian is probably the right choice. But I don’t think you actually should turn away from using very famous classical works if the tracks are appropriate, it may actually be preferred if you can apply a piece famous enough that would be recognized and symbolically used for a reference.