So I’m working on a li’l something something related to this that I hope to release in time for May the 4th. Won’t say anything more at this point, but just wanted to tease it at this stage…

3D render. Even if you could get a custom steelbook, there’d be nothing to put in it… 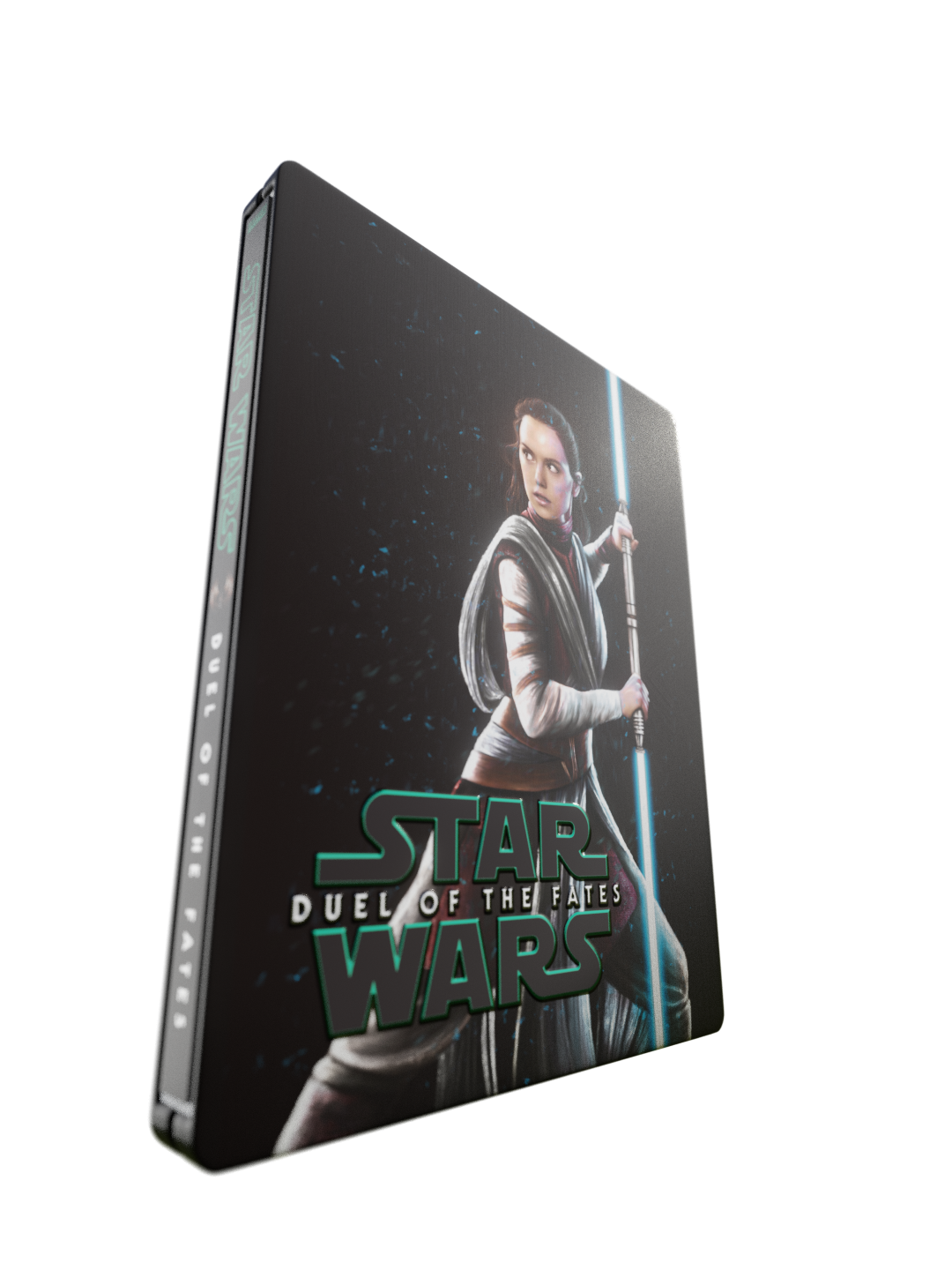 Not saying it would be implausible for it to more closely match the sunset seen in ANH, but there’s no astronomical reason it would have to. For my 2c ROTJ calls back to ANH enough already. :-p

Sounds fantastic. Let me know if you’d like a hand with the blender side of things. I’m no expert but I know my way around it — see my OT.com vanity plate.

I believe HAL9000 did something like that in his TFA edit where he changed a line. It’s not hugely different from what Ady did with Yoda. Where in the film are you thinking about?

Been distracted with work and other commitments since the release of Pilgrim, I’m afraid. I picked up Blender to do some VFX for this edit, and ended up being asked to do some animation for a music video (among other distractions)…

However, I’ve done a bit more work on the pacing side of things, especially as concerns Rivendell and the transition from AUJ to DOS. They don’t seem quite so rushed now — ironically in the latter case, cutting a couple of shots achieved this.

I’ll be working on Mirkwood next, which I haven’t done much with yet.

Given the original effect was literally just an actual sunset double exposed, I don’t know that you could call anything else “more realistic”. Hyperrealistic, perhaps, but for my 2c, the Star Wars aesthetic is at its best when it is the fantastic presented in a thoroughly mundane and realistic fashion.

From a Watsonian point of view, you get spectacular sunsets when you have unsettled weather. Tatooine might have dangerous sandstorms but the photogenic clouds at the end of ROTS would hardly be typical.

Well, we see both X- and A-wings, at least, with red markings. But where do you get the 3 wing groups from? From memory I think there’s Gold, Red, Green and Grey squadrons name-dropped in the film.

There is a recording of the Throne Room march (in fact Ady used it in his extended credits) that alters the final note so that rather than segueing into the credits it leaves it hanging.

I like the idea, although I agree that “less is more”. A wipe to a single shot of Darth Vader’s TIE fighter exiting hyperspace, and slowly panning to reveal the Executor in the distance (with a planet in the BG and maybe a couple of regular Star Destroyers for scale) would be enough for me.

There are two very different kinds of explosion effect in the OT. Where they’ve blown up a miniature it’s great. Where they’ve merely match cut to a firework going off it’s hardly more “realistic” than a CG one. The latter can still work fine (they used it for the Death Stars after all) but in some cases the mismatch between the miniature and the firework is jarring.

Hear me out on this one.

When R2-D2 is serving drinks on the sail barge, they missed an obvious opportunity to depict him with a corkscrew attachment, or at the very least a bottle-opener for someone to crack open a cold one on.

Any chance of a one-second cutaway during the sail barge sequence to correct this glaring omission?

I believe he did confirm that the ESB:R Blu-Ray is on hold and will be released alongside the others.

We all would. Can’t blame the guy for drawing a line under the OT, though.

I do hope he’s kept whatever notes or plans he had for the PT. I’d be very interested to see what he had in mind, and surprised if someone else (preferably with but even without Ady’s blessing) didn’t end up trying to follow at least the general idea.

Lower-ranking Imperial officers were generally cast with American accents; they just didn’t really show up in ESB, so people got the idea that it had changed the rules and made all Imperials British (and glossed over the fact that the stormtroopers sounded as American as ever). In ANH the roundtable officers have British or at best mid-Atlantic accents (compare Motti’s accent to the same actor playing an American in Raiders of the Lost Ark or Who Framed Roger Rabbit), while the lower-ranking officer class (eg. “Where are you taking this… thing?”, “She’ll die before she tells you anything!”) has American accents, so there’s hardly a continuity error in retaining this guy’s accent. It’s a class thing, not a good guys/bad guys thing — leaving the prequels and sequels aside, just in this movie we have Mon Mothma, the closest thing there is to a Rebel leader, depicted speaking in practically the Queen’s English.

FWIW, the crying rancor keeper is one of my favourite moments. It’s the most creative moment in the whole Jabba sequence, IMO. It adds a bit of depth to the world, and it’s just plain hilarious.

I can understand why it’s polarising, but my vote is for keeping it. I also love the ironing droid in TLJ, so maybe I just have a thing for bathos.

Throwing another idea out there for the “your mother” scene, that ties in with “from a certain point of view” as well as with Kylo Ren: in an episode of Rebels, James Earl Jones as Vader delivers the line “Anakin Skywalker was weak. I destroyed him.” I’m not sure if the audio of the line could be found isolated from the SFX in the scene — and indeed, if Ady has an impersonator available, there’s no need to restrict himself. I’d just found out that JEJ voiced Vader in Rebels and went looking to see if there was anything that might be suitable, following the “your mother” discussion earlier.

The use of tracked-in music in ROTJ is definitely noticeable in places — the use of “Here They Come!” from ANH during the space battle, most prominently. Are there any other points in the movie where we have a version with the original music? (Is that what ChainsawAsh is referring to, or just this one scene? I haven’t seen that release.) For the Obi-Wan scene, though, I don’t think the score adds anything. It may just be because it’s the way I’m used to hearing it, but I think it’s more effective without music.

I’m also wondering how we all feel about deleting the line “It is too late for me, son.”

Personally I love that line, a great bit of voice acting and really adds depth to Vaders character. Makes him seem real rather than just a cut and paste bad guy. I remember seeing it at the cinema on first release and thinking, wow maybe, just maybe Luke can get through to his Dad.

Agreed. It isn’t telegraphing his later turn or creating some kind of illogicality. I think it’s one of his most important lines, in terms of the insight we get into his character.

Ady, if you mess with this one, we riot.

Also, is it stated in the movies (OT) that the Empire is drafting people? I kinda figured it was indoctrination and the lure of the darkside.

BIGGS: I know it’s a long shot, but if I don’t find them I’ll do what I can on my own… It’s what we always talked about. Luke, I’m not going to wait for the Empire to draft me into service. The Rebellion is spreading and I want to be on the right side – the side I believe in.
…
LUKE: Well, I’ll be at the Academy next season… after that who knows. I won’t be drafted into the Imperial Starfleet that’s for sure… Take care of yourself, you’ll always be the best friend I’ve got.

As an aside, this convo with Luke completely dispels the EU misconception that Luke was joining an Imperial Academy. Why would Biggs and Luke be worried about being drafted into the Empire if they were already signing up? On the contrary, it points to the Academy either being part of a local municipality or the equivalent of a trucker school. Just one of those things that the EU got wrong that has always bugged me.

On the other hand, you could interpret this about going for officer to avoid being drafted as a grunt.

IIRC the idea in the deleted scene was that it wasn’t (or wasn’t just) a military academy. Biggs came back with a commission on a civilian freighter.

Well, that’s not intimidating at all. XD

So I’ve got a rough playlist of music to try out. I won’t just be replacing the featured pieces; I’m considering pieces where to replace the existing score in places too.

All of the above are on Spotify, so you can have a listen to this playlist and let me know what you think.

Some of them seem to work extraordinarily well. “The Dark Side” has repeated chords at the end that can blend very well into Neo’s alarm clock, similar to the original. “Adrenaline Burst” is in the same key as “Torment (Interlude)”, and based around a very similar riff, so follows it very organically. I haven’t tried them all out in terms of syncing to picture yet, but I have high hopes. None have key or tempo changes of the kind that would make cutting them up to fit a problem.

On the other hand, I probably won’t be using “Algorithm” in the movie itself. It’s a brilliant song and very fitting, but too much of a show-stopper. It already sounds like trailer music, so I just might use it as that.

As for actual edits, to the film, here’s what I have in mind so far:

This isn’t an exhaustive list. I haven’t started the cutting process yet, and more edits will no doubt suggest themselves, but I thought I’d give you an update on where things are at, while we wait for Scott Pilgrim.