here’s an image I made for The Rise of Skywalker to try and better match the art, err thumbnails, for the recent blu-rays/digital release of the saga. I just wanted the teaser poster to be a little less sparse and a logo that matched. Took longer than I expected, so thought I’d share! 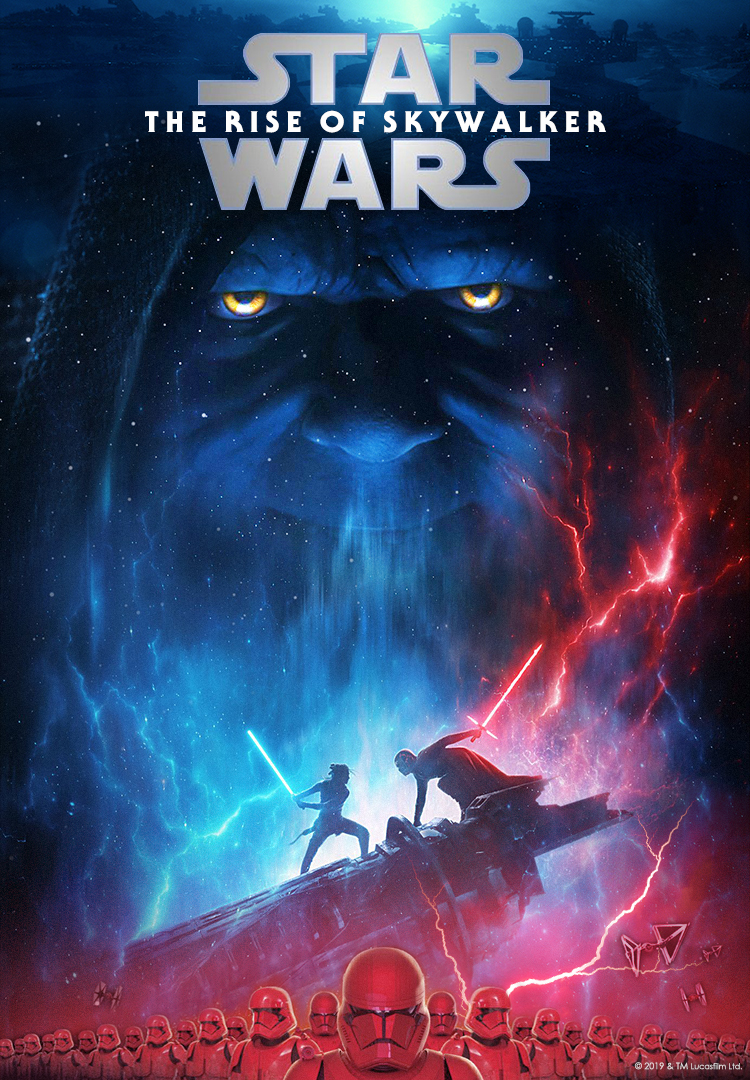 I have a recollection that there was the indication of twelve potential Star Wars ‘episodes’ somewhere on the cover of a vinyl soundtrack album for one of the original trilogy films. Is this an urban legend or is there something to it? I was so sure it was a thing that I even remembered seeing a scan of one such album cover somewhere on the web confirming it, but after a brief search I have come to doubt the veracity of this memory…

That hangar worths its brainstorm as well. except if ady will keep it grounded (crap)

Too extreme? Consider it as ideas that can be in. Like sparks, fires, tilt to camera, non centered shots Sunlight from cracks, more depth, more colors, etc.

Haha, looks like the Michael Bay version of Star Wars.

Any thoughts on my Leia "Star Destroyer" dialogue point?

I think I have to agree with sluggo, that line has always been the thing that bugs me about the film the most.  The line is delivered in such an odd way.  I'm just not sure what could be done about it.

Thanks for the article, it was a great read. Gillard seems like an interesting guy, his contributions seem to have added alot to the films.. or the film and 2 videos.. or.. whatever.

GM, a while back you mentioned that the 'Captured' insert in episode 2 was "much better now" due to new discoveries. Does this just mean its free of film sounds or expanded as you hypothesized long ago when speaking about the droid factory scene (and what music might have been meant to cover it)?

The more I think about it, there really is no excuse for Vader to not have his helmet on.  It doesn't matter how long we make the hallway or anything.  How come people can just go in and open the door without knocking or anything like that?

I would imagine that the helmet has to be uncomfortable at best, and he might want to have it off when he could.  Also, only a few, select, people would have access to that room.

I seem to recall reading somewhere that Vader was experimenting with the force to see how long he could sustain himself withought the helmet for short periods of time.. or something to that effect.

This is probably the version of the film I've seen the most, so im glad im finally going to be able to see it in better quality.

I'm kinda hoping that people like Adywan stay away from this documentary... it just seems like a film about causing unnecessary commotion.

I'm not quite sure what I think of the addition of Hayden, though I fully understand why Hayden was added.  I mean, the thought that Anakin 'died' when he turned to the dark side makes alot of sense to me.  At the same time, the shots of Shaw have sentimental value in my mind... and they arent a reused screen test.

lol Yeah, I think I would've liked to see Ahmed best do Jar Jar. Hell, he even did it for robot chicken, not sure why he didn't reprise the role.

I hope not. I cringe every time I hear that stupid thing. :p

I'm almost 100% certain that the scream is already present there.

Did work on this ever progress?

What events are you reffering to? If you dont mind me asking. (loved your Pearl Harbor cut btw)

I sent you a cover mitch, but you never put it up. If u need it again, i'll gladly send it.

I agree with leaving the helmet movement. Also, someone brought up the saber glow thing back when ady was doing ANH, and he said he wasn't going to bother. Also, I'm pretty darn sure the glow is not in the prequels, well for the most part that is. It is inconsistantly present in some shots, but not in most shots. It is there for CGI characters like Yoda, but not for real live actors, except for that one part during the duel between Anakin and the count in Episode II when the lights go out. To the best of my knowledge, that is the only scene where they actually used light up saber props specifically to get that lighting effect.

I'm interested to see (well, hear) the various fan projects regarding Indy scores that will be released because of this new set.  I mean there's a fair amount of material available now.  Raiders is completely available (to my knowledge, even if some of the tracks vary in audio quality) and a whole whack of TOD material just popped up in the Lego game. With the game rips, bootlegs and the new CD releases around, some good stuff is bound to show.

I actually really enjoy the music from the Clone Wars. I'm not a fan of the electric guitar elements at all, but overall really enjoy the work... I think it seems fresh, although I in no way think Williams' music was 'old'. I really wasnt a fan of the new version of the main theme at first, but it grew considerably on me over time. I think Kiner is a very promising composer.

Some fan will likely have to take the various official and non official sources to make a defintitive version of the scores.  Someone like goodmusician perhaps?

The guy who did the edits I mentioned earlier told me a while ago that he might be doing new edits when the new sets came out.

Owen, I can't speak for others, but my "random junk" was simply an attempt to lighten the mood (and be nostalgic). No need to be exasperated or angry. We're all friends here - seriously.

lol, wasn't aimed at you really.

Man, that would be a dream..

Having a Mara Jade appearance during the rancor fight in Jabba's Palace would be fantastic, She is suppose to be a spectator.

Adywan has stated many times that there will be no EU related alterations whatsoever.

Does anyone have a high res version of this poster?

Another thing to consider, footage of Jango from Episode II could also be used for this. He would just need to be re-colored & whatnot. It would be cool to see Boba Fett use his flame thrower!

... what deleted scenes with jango... there are none, except that one with him just standing in the background..

I found the albums that were made from DVD rips and they weren't spectacular, as expected. The main problem is that they use the film as a guide (as I mentioned earlier, because its probably impossible to know the music's original order due to how edited it was for the theatrical release). The albums also don't seem to have any of the material from the actual OST album mixed in, most likely because the rips from the DVD are so edited that only bits here and there seem familiar from the official soundtrack.  The only project regarding this score that I see possible at this time is as follows:

Step 1. Someone musically experienced should do a new rip of the music in the film and learn the material backwards and forwards.

Step 2. They could then combine the bits of the album present in the film with the rips to form tracks as devoid of sound effects and dialogue as  possible.

3. Then, the parts of the album not used in the film could be labeled as unused, and placed as well in the album's timeline as possible using their knowledge of the material, the script and the track titles as a starting point.

I'd love to give this a go, but have absolutely no time for such a project. Perhaps I'll have time in the future, or maybe somone wants to take this monster on.

Who knows, maybe GoodMusician is a fan of the score (although he seems very busy as of late)...