I'm really impressed about the release and must say thank you Laserschwert and Harmy and all the guys who helped for your hard work.

I never thought that I would see Krieg der Sterne again as it was back in the seventies.

The video quality is really fantastic, what can I say. Harmy did do an extraordenary job on his project and I had really no idea that it was possible to do that.

When I started watching it I was really exciting to see the opening letters, 'Eine Lucasfilm Ltd. Produktion' and 'Es war einmal vor langer Zeit, in einer weit, weit entfernten Galaxis...' and the following opening crawl and there I want to say thank you to Laserschwert for your hard word on the opening crawl and the credits (yes, there are german credits, too).

Thanks for bringing back the different german audiotracks from several relases  and for the 5.1 audiotrack. And yes, the missing audio lines are back!!!

Again, thank you Laserschwert and Harmy for bringing that one back. This is a day that will be long remembered.

I have a few myspleen invites, if somebody is interested.

I watched it today and all I can say is wow, what a project and what a release!

First, when I saw the bright stars in the opening scene after the opening crawl and the bright despecialized laser blast when the imperial ship hunts the Tantive I knew that this one is something special.

Then the whole thing impressed me, Harmy you really have a big talent on these movie restoring things IMO.

Happy birthday Harmy and all the best whishes!!!

I saw the lightsabers you fixed and wanted to say: Wow, I'm your fan!!!

Good news! I can't wait for it.

May I ask how big the MKV file is so far?

For extracting the chapter files from the mpls file you could also use MeGUI. In fact it is a gui for eac3to and many other tools. It is like the swiss army knive for x264 and audio encodings and can also mux to AVCHD, MKV and MP4.

I made encodings with g-force's script to stabilize the GOUT a few years ago.

One movie took about one week to encode. The encoding time was estimated for 2 weeks, but it took one week finally.

For ANH I started the encoder, travelled for vacation to spain and when I was back at home I had the first movie encoded!

I didn't ever think I would say that, but I cannot see a difference on the screenshots from the fast vs. slow encodings Harmy posted.

If slower settings lead to only a very slight increase in fine detail, I'd still say it's worth the extra wait.

Of course, I have no idea what specifically you're referring to. But just sayin' that this is an important project since this is likely the closest we're going to get to a true HD remaster of the original for a long long time. So any little bit extra that can be squeezed out of it is worth it in my book :)

Well, all the emails were sent, so if you were picked, you should know by now. I added imoortalseed to the list, so three places still left. Anyone wanting to take care of RS, perhaps someone with a paid account?

Sadly I cannot upload, my UL-speed is really slow. It also took a few days, until I got your latest workprint. :-(

Sadly I have no italian an french audio track.

Harmy, I have the german 2.0 AC3 audiotrack from the GOUT DVD synced with your version 1.0. If you like to have the track for version 2.0 I can upload it somewhere.

I could also upload the audio tracks from Moth3r's The Lucasfilm Pwnage Edition with Moth3r's ok.

All tracks match 23.976 fps but I'm not sure if these are in sync with your new release.

If it can help Mac users out there, I own both a 13 inch MacBook Pro running the latest build of Lion and a Hackintosh PC with a BD burner. Never tried burning a Blu Ray, all I know is they play fine in Mac Blu Ray player. While my MBP fails at burning all kinds of discs, my PC's burning all kinds of DVDs just fine on OS X. Why? I have no idea.

@Harmy: I wanted to extract the GOUT French audio tracks to add them to your mkvs but running times don't match by almost 5 minutes. Is that normal? I'll wait for the SW 2.0 mkv to try again.

For Harmy's version 1.0 of SW, ESB and ROTJ I used MeGui to slow the speed of the audio down.

I demuxed the desired audio stream from my PAL GOUT DVD, loaded it in MeGui and there is a option to change the sample rate. I used 'slow down from 25 fps to 23,976 fps'. Then I remuxed the video stream and the new audio stream and the result was good, both streams were in sync. That might work on his version 2.0 also.

But sadly I do not know if there is a MeGUI version for a Mac out there.

@Oldschooljedi: 005 is absolutely right, it was always like that.

I just whatched the scene on the GOUT DVD and yes, your're right. I didn't ever notice that, must have something to do with the poorer picture quality on older releases (or my eyes).

on the bluray release is a small error in the fight scene between Ben and Darth that is still visible on the "LS-Fight-new-new" sample you postet: 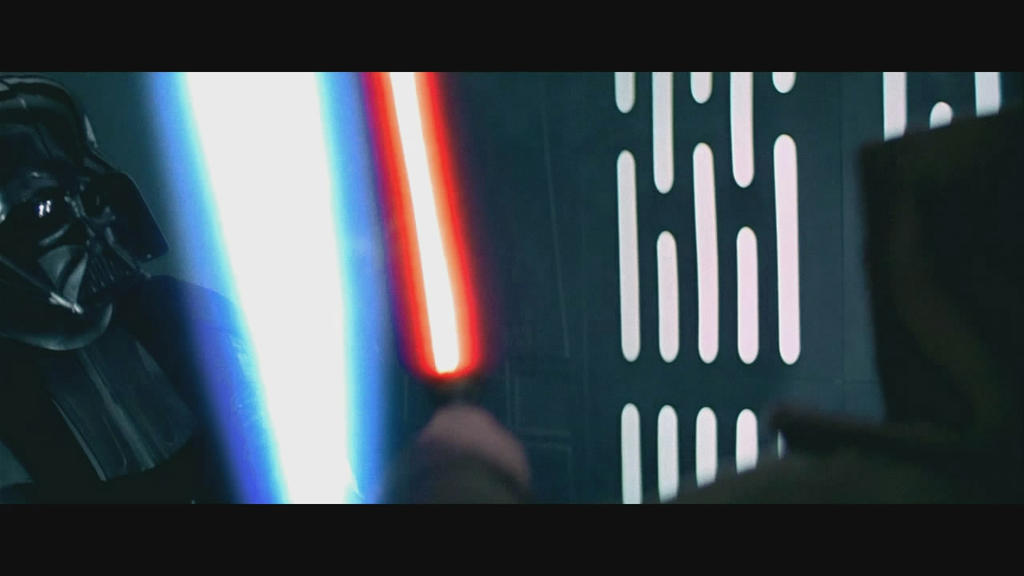 Can you fix that?

MeGUI might be the most powerful tool to make x264 encodings but sadly I must say that I have no idea how to tweak the settings to get the best results.

When I encode a video with MeGUI I simply choose the x264:AVCHD 5/9 2-pass mode for a DVD-R and the movies play fine on my standalone. But there are probably many things that can be tweaked...

Yeah, I'm back at work on it, though I only just moved back home from uni, so I'm still settling down and stuff, so don't expect a new WP for at least a week.

Can't wait for your next WP.

Are you sure you have the correct version? That release is anamorphic.

Thank you for the update!

I wish you a lot of luck for your exams and will come back here then at the end of May.

Btw. I watched the official Blu ray release a few days back and now I know why your version 2.0 will be a release that will long be remembered ;-)

May the force be with you and all the best wishes!

Saturn or Media Markt might still have these in their shelves, still sealed.