A good test I’ve found for these scenes is whether or not Threepio’s leg remains silver. It looks a bit gold here, so I’d keep an eye on that going forward.

I also feel like the clouds on the left are really booking it out of frame.

I know this is kinda an old discussion now, but I’m new to originaltrilogy.com and for my first post I might as well rant a bit about my least favourite SW film. Negativity bias and all that.

To me, Rise of Skywalker feels more like a corporate product instead of an artistic vision. It does so much pandering and backtracks on themes from The Last Jedi, the WORST thing they could do for this already incoherent trilogy. It also seems like a film afraid of its audience, an example being Chewie’s fake-out death; although that scene actually impressed me, I would be OK with it being a ruse IF they gave the reveal when the characters find it out. But instead they do the reveal at the earliest opportunity, a captured Chewie accompanied by a joyous flourish that’s the musical equivalent of “hey look, he’s alive guys! “We didn’t kill him! Please don’t be angry!”

Bringing back Palpatine and a secret fleet of death-star-level warships - which still do nothing for the film’s low stakes - is the cheapest move since, um, The Force Awakens’ story structure. I don’t even enjoy Ian McDiarmid in this film, that’s how bad it is. His existence WOULD somewhat ruin the ending of Return, only I hear he’s a clone - and what says ‘desperate’ more than having a clone of a previous villain as the main antagonist? I’m not even mentioning the death scene. TROS tries to copy Endgame in so many ways to make the same profit it’s painful to watch.

There’s also the issue of the self-indulgent fan service that featured in Force Awakens being blown up in this movie. By self-indulgent, I mean while The Last Jedi featured nostalgic OT things that furthered the plot, this film doesn’t (I’m thinking Yoda’s theme as Luke lifts his x-wing, and Chewie’s medal). A recurring problem in JJ’s films is things that make sense to the audience but not in the context of the story. Here, it’s Chewie’s medal (Jesus Christ) and that after Chewie’s ‘death’, the characters seem to quickly get over him. There’s no more Rey-Poe tension, which I liked, or anything.

In general, I didn’t like most of the over-saturated cinematography or the over-the-top finale. I actually enjoyed Rise of Skywalker on a first watch, carried along by the revelations, but soon decided that it’s so much about constantly driving its video-game plot that it loses the special moments that really make Star Wars, and is just not a rewatchable film. It’s like it’s designed to be seen - or ‘consumed’ - once, then forgotten.

These seem more like nitpicks than a negative review, I just wanted to say more niche things that MAYBE haven’t been mentioned here. Please understand that I now view The Rise of Skywalker as a black hole of garbage that sucks in even John Williams’ soundtrack, which mostly amounts to previous Star Wars themes in the weirdest places. Also, sorry for writing so much, it feels nice to put my thoughts out in a purely SW-fan website/discussion.

This is all correct.

For people doubting the studio meddling, of course there was. The studio threw out Trevorrow out of fear and brought in JJ because he made them money on the first film…ignoring the fact that he’s never been able to finish a story.

They almost certainly meddled in the script that JJ and Terrio made to make it more ‘safe’. I won’t pin the bigger script mishaps on studio meddling, but there’s no way that this wasn’t an issue.

They absolutely cut out much of the connective tissue of the film before release, to the point that JJ basically gave up on it.

This isn’t to defend JJ’s terrible choices - a good ending would have survived all this meddling - but credit where it’s due, the problems came from all sides. 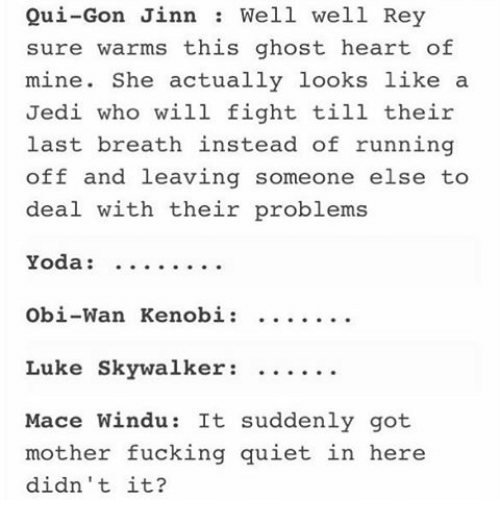 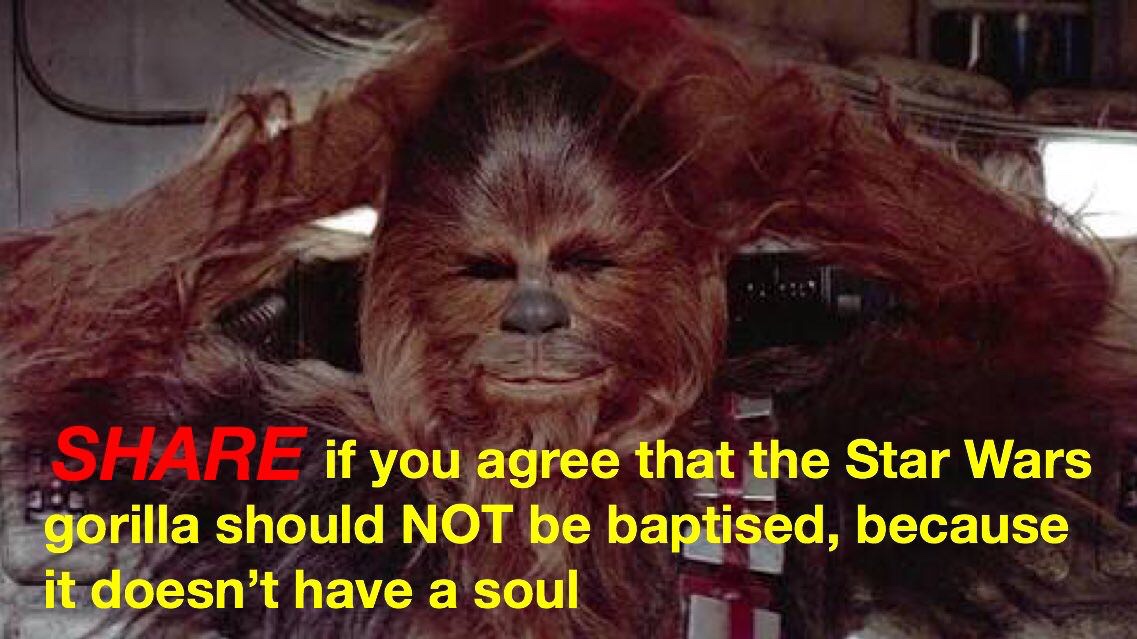 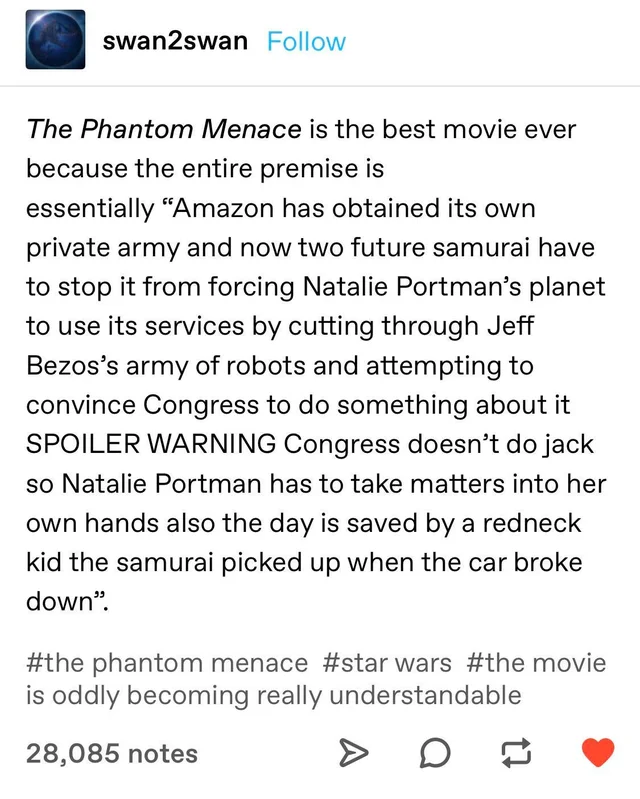 Disclaimer: I’m not an endocrinologist, so I might have no idea what I’m talking about.

For about a decade, since my early teens, I’ve had an ability to induce a set of sensations within myself at will. First I feel like there is something in the back of my head that tenses just a little bit, then I feel a tickling sort of sensation throughout the backs of my legs. From the back part of the upper thighs down to the ankles. Sometimes I can’t quite control the intensity. I get carried away and the tingling gets to be too much and I spasm for a second to let out the steam. I can repeatedly activate and disable this mechanism several times a second. My best guess so far is that I can somehow release small amounts of adrenaline into my system at will.

Does anybody else experience this? Any explanations?

Hi mate. Experiencing exactly the same thing since 15 yrs ago… was looking in the net if anyone knows what this is and i spotted this post. Interesting thing is that i use it when i am too sleepy and it gives me a boost and wakens me up for abt 15-20 mins. Would appreciate if you have found what it is.

The OP hasn’t been around since 2016, unfortunately. I do hope someone else can chime in if they’ve had a similar thing happen to them. The closest thing I’ve experienced to that was when trying to induce Out of Body Experiences. A popular method that I tried was to focus on the nerve endings in various parts of my body as I was falling asleep in order to produce the feeling of buzzing energy which could facilitate the altered state. It was occasionally effective at OBE’s, at least.

Best of luck in your search.

And who would even be fighting them over Jakku, Bespin, or (in the original) Endor.

Don’t think about this movie, please.

Here’s my inventory of things left unresolved as of now.

As you can see, there aren’t too terribly many things that remain, at least for the main version. Rey Nobody can then wait until things are fully ready for that as well.

Am I the only person who didn’t mind Rey Palpatine?

This, except that it’s Hal’s Prequels for me. TROS is an insult.

The difference is that Hux sticks around. If an officer screwed up badly enough to warrant Vader’s wrath in ESB, their movement within the organization was usually limited to six feet in one direction.

I’ll say it again, I would’ve liked a reflection and meditation on how to rebuild Germany and reconcile the population while purging the bad after WWII and dealing with the shadow Hitler left. What I got was the return of mecha-zombie-Hitler decades later to destroy the world as revenge.

It’s so clear as a through-line to the saga as well.

Prequels: The dysfunction which leads to tragedy.

Originals: The horror which leads to Rebellion.

Sequels: The wisdom which leads to peace.

Except that the sequels chose to retrench instead of move forward. 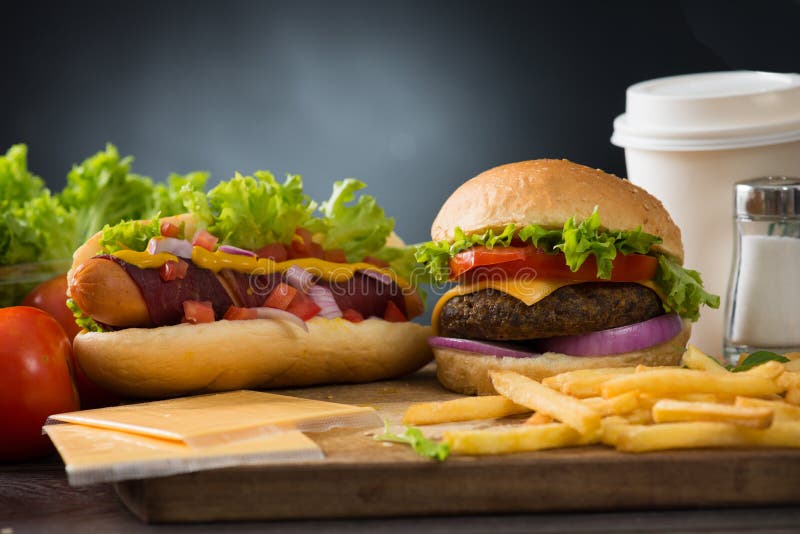 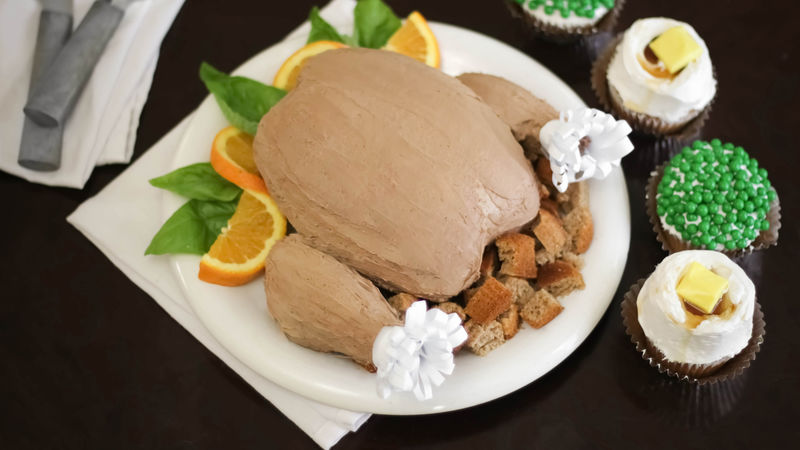 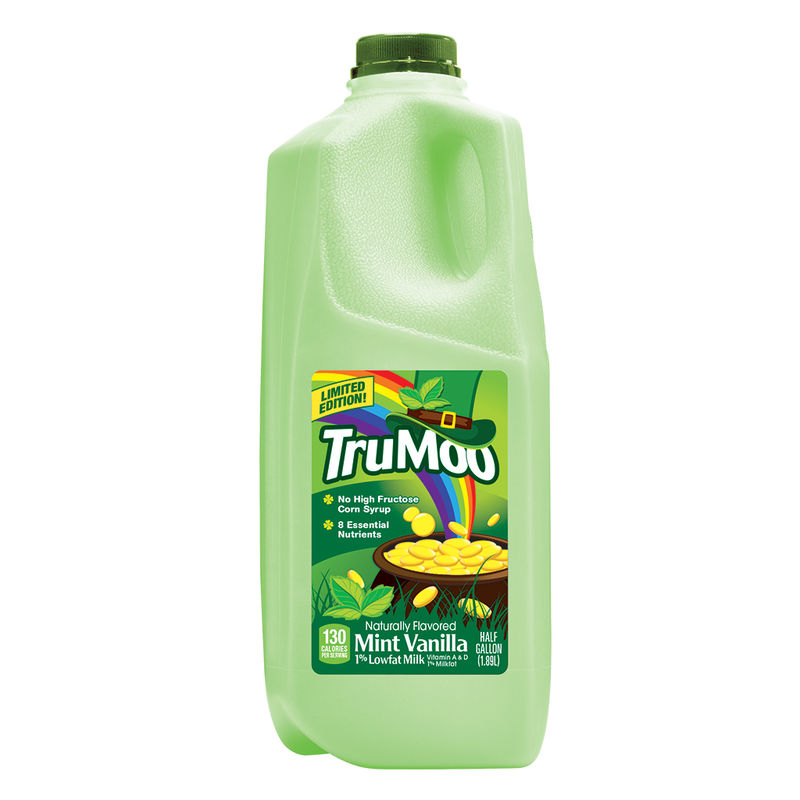 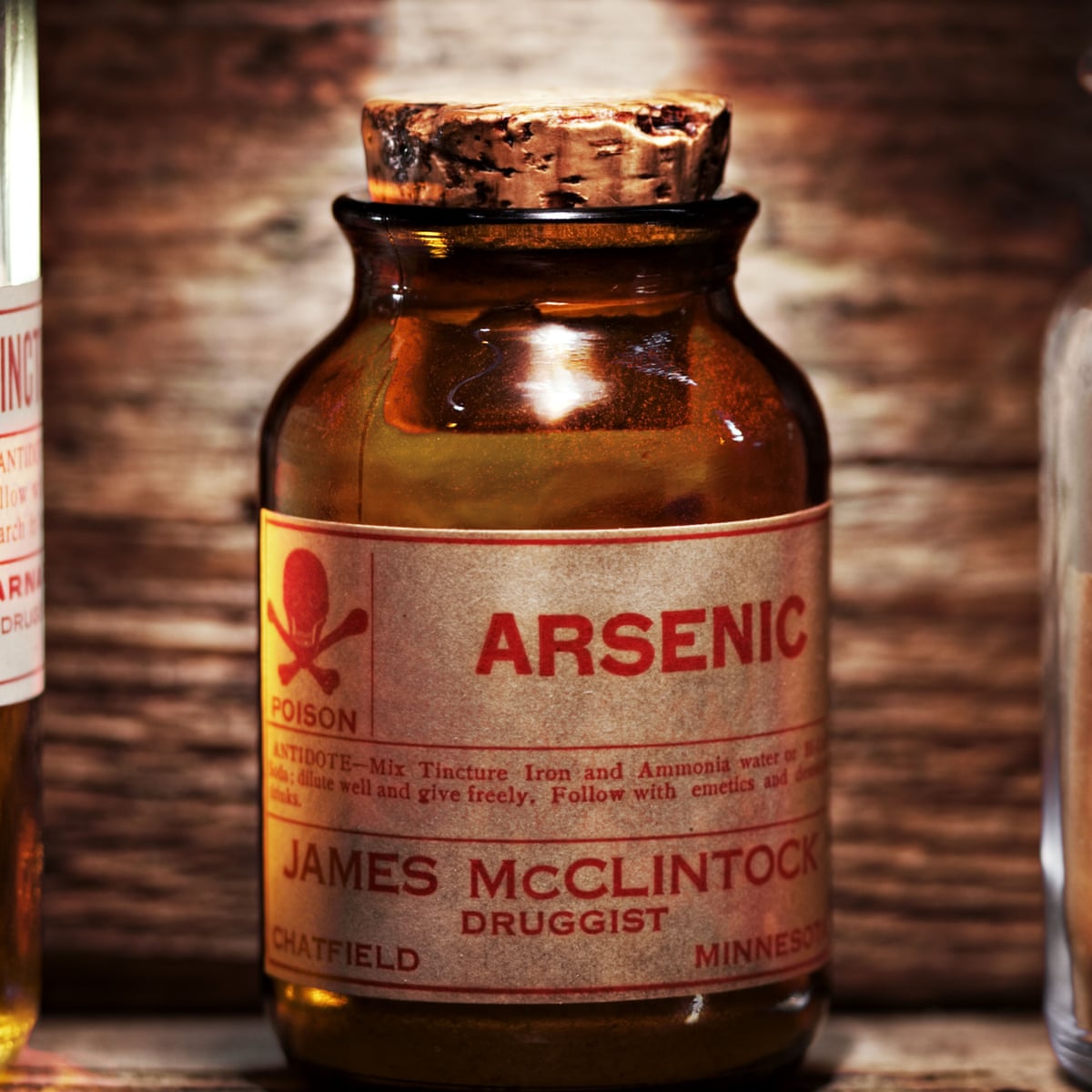 Yoda’s lesson in Empire. The way the music swells when he says “You must feel the Force around you” is peak Star Wars for me. A close second is Han and Leia’s “scoundrel” kiss. More romance in 3 seconds than in the entirety of Attack of the Clones.

Nobody to Palpatine is already a problem though, and at least the reversion back to Nobody solves it. Kylo would be going off of Palpatine’s information above his own intuition from TLJ, so he would be duped as well, or in on it. Some tweaking of his dialogue here would probably be needed.

In an edit which removes Rey Palpatine, I agree that her story would feel even weaker than before. However, you could keep Rey Palpatine as a misdirection to get her to go to Exogol. Take out the flashback to her parents getting killed and Luke’s insistence that Leia knew all about this, and add some Emperor dialogue revealing the deception. His statements later actually support that conclusion anyway, where he refers to her as merely a scavenger girl.

Now Rey has to come to terms with a possible unavoidable darkness and it doesn’t trash the rest of the ST in the process.

Oh really? I must have forgotten or totally missed that you did that.

It was after Rey returns from Starkiller and is looking at R2, there’s an off-screen conversation between Poe and Leia where he mentions the Hosnian System. It was my attempt at naming the system somewhere, but it’s super subtle.

I wasn’t able to find any Leia lines that were practical, except for a few brief phrases like ‘they caused so much damage’ and ‘we need help’ which I put into my TFA edit in the background of one scene.

It’s funny, the more you think about it. The First Order General was offed as a joke and their Supreme Leader hallucinated himself into switching sides, then the rest of the organization died off screen.
A story for the ages. 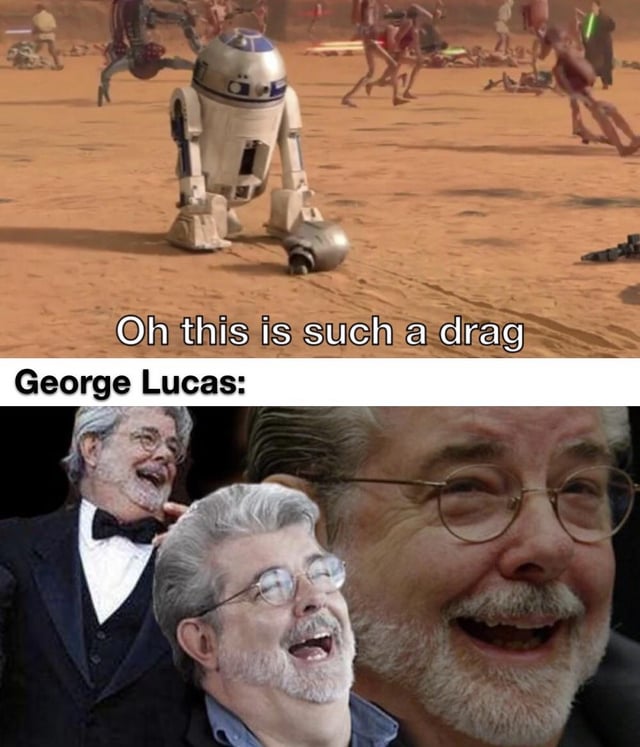 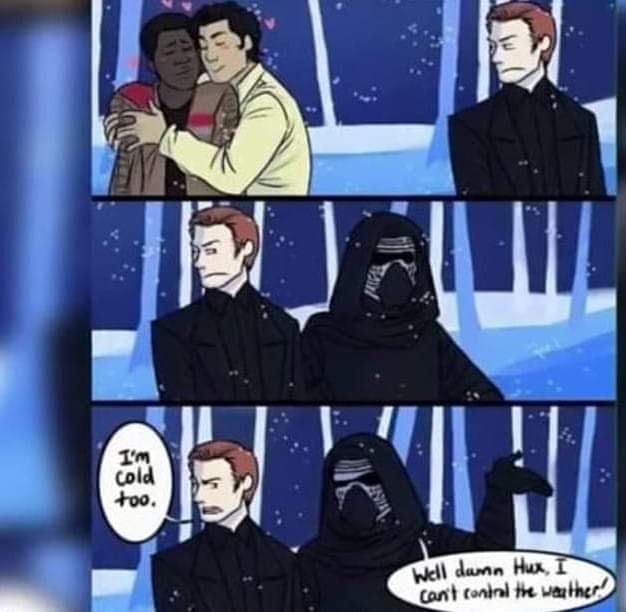 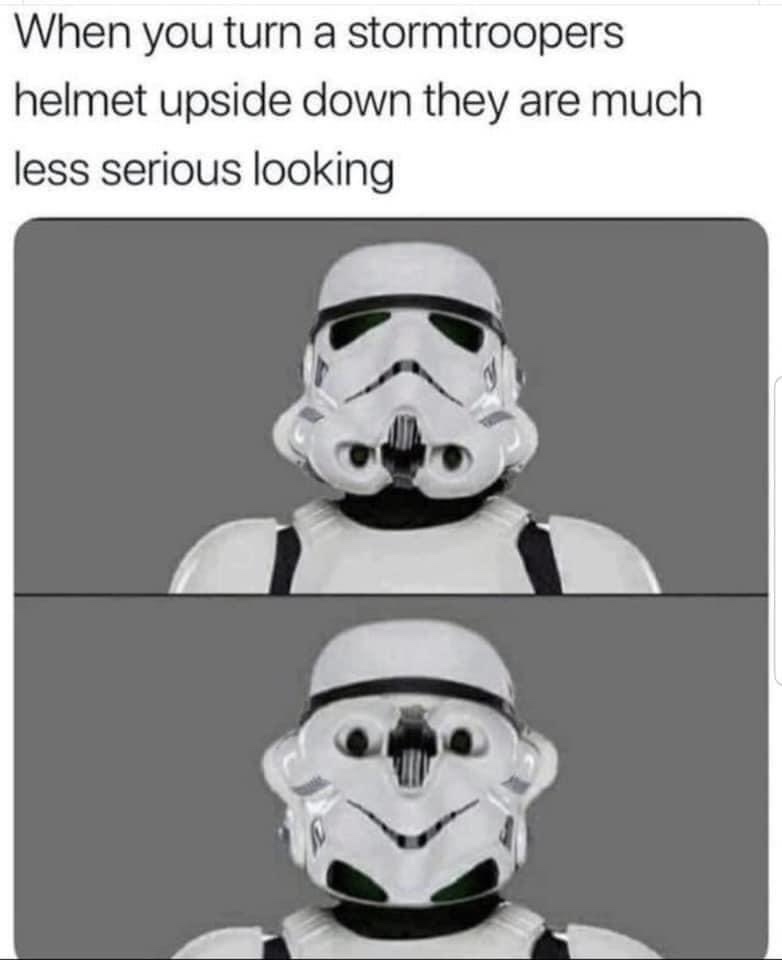 Take it to the Best Edit Ideas thread.

Oh, I must have forgotten:

And yes Dek, that’s how I view them as well.