If you wanted to leave the hallway scene, you could just move the bit where the crew is downloading the plans onto the floppy disk and place it after the hallway scene. In this way it is assumed that the plans needed to be transferred to disc before being hand-delivered to the transmission site on the ship (or perhaps the primary comms were damaged and they need to use a backup, whatever). Then you could have a shot establishing the Tantive IV on the opposite side of Scarif or in deep space like RJ suggested receiving the plans and jumping to Hyperspace.

Upside: you have a new crush.

Well there’s only one way to find out! …by extracting the sound from TROS and overlaying it with the soundtrack in Audacity and trying to precisely match the waveforms.

As the death star prepares to fire on Alderaan, edit in real world footage of violent atrocities being committed on the planet’s surface in order to make it more understandable that the empire would want to destroy them.

I have to imagine that this is something that would have actually been produced in-universe by the Empire.

That may be to do with the character type originating (and mostly remaining) within poorly-written fanfiction, where the character is an obnoxious power fantasy for the author. Since there is nothing inherently ‘wrong’ with the power fantasy trope in general (there being endless popular male and female examples across all genres of fiction), the only criticism one could levy against them is if they are obnoxious, which is an almost entirely subjective discussion.

I think the handoff from Leia to Maz gives some of the ‘good story’ aspect without spelling it out completely. It’s never going to be adequately explained how anyone found the saber originally, but now at least the saber is in the hands of someone who has a vested interest in it, or is connected with someone who does (Kylo). Her giving it to Maz could have any number of explanations and here it spurs some thought and interest instead of being a complete mystery.

Maz’s ownership of the saber was something I was trying to figure out at some point, and thought it could work to have it be part of Rey’s vision in the previous scene. I abandoned the idea since I thought it would disrupt the scene too much, but here’s one way it could work:

Obviously just a mockup, but all the elements are there and I think it may actually add something. Leia’s ‘Bring him home’ could refer both to her later line regarding her son as well as instruction to Maz to find Han and bring him back to her, Maz being a trusted confidant of both parties. Or it could even refer to Luke, since Leia could have deputized Maz into the Luke quest at some point and thought giving her the saber would help somehow.

People often overlook that documentary-style filmmaking was a significant element in the original Star Wars, which helped give a sense of reality to the fantastical world.

With TFA nearly every shot has dramatic camera movement, the shots cut for the fleeting emotion of the scene and the scenes existing within a fragile web of movie logic that begins to dissolve upon any closer inspection.

Though TLJ is better in this regard, it still feels like the director is driving the focus of the scenes with singleminded intention.

IMO, a stationary camera on a tripod is sometimes the best answer.

I did a little mock-up to see how the colors might be brought more in line.

Looks good! I’ll try for that.

Apologies if I missed anything in the thread about this, but was there ever any interest expressed in adding the ‘Finn and the villager’ back into the film?

The only reason to add the scene in my eyes would be to serve as a replacement for the moment when Finn reacts to his dying comrade so that the implication isn’t made that he has a special concern for their welfare. However, that’s where he gets the streak of blood on his helmet so the moment would have to be altered and not removed, presumably to add a dying villager in place of the trooper. That would be my ideal solution, but it is probably outside of my abilities to accomplish and again serves to make the Finn and villager scene redundant.

JEDIT: Also updated the dice background for continuity with the rest of the scene.

Just curious, any particular reason for changing the cropping of the shot? Seems a little more zoomed…

Also I wonder if the Falcon’s hull should be shadowed/tinted the slightest bit more, I feel like with this new background being somewhat darker the ship blends with the environment a tiny bit less. I dunno, just the first thing that came to mind.

Perhaps so. I’ll take another look at it.

One thing, in the wide shot the big lights in the back of the cockpit are more white compared to the blueish color in the surrounding shots. Perhaps those could be brought more in line? Looks like that shot could use some blue in the highlights overall. 😃

That’s something I’ve noticed, and actually tried to pull the lights to blue but it just wasn’t working at the time. I’ll give it another go. 😃

The Galaxy of Sounds: Connections episode has the Han in the Falcon cockpit scene with just sound effects, which would be perfect for the rescored Dice scene if anyone has access to it.

JEDIT: Also updated the dice background for continuity with the rest of the scene.

As I said, either approach works for me 😃

Indeed. I believe I was one of the damn fools who argued for adding the second charging due to it being unrealistic for Poe to let his emotions get in the way of a pointless mission that was already too costly in terms of lives.

This was mere weeks before TLJ’s release, as I recall.

Yeah, the idea of it being multi-use makes some sense based on the remaining solar material at the end, and it works for me either way.

If you would like the workprint you have but to ask, however here are some screencaps: 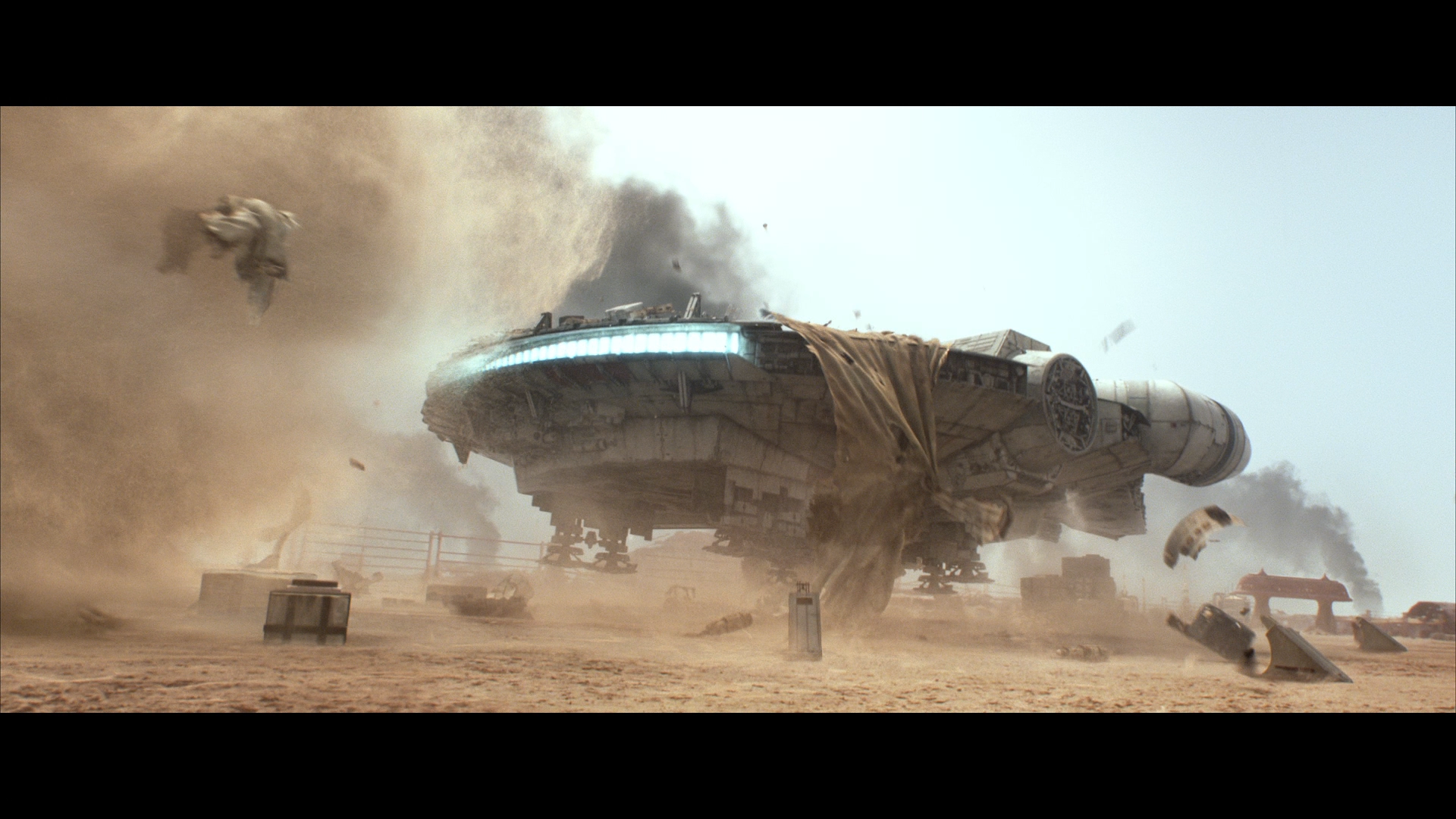 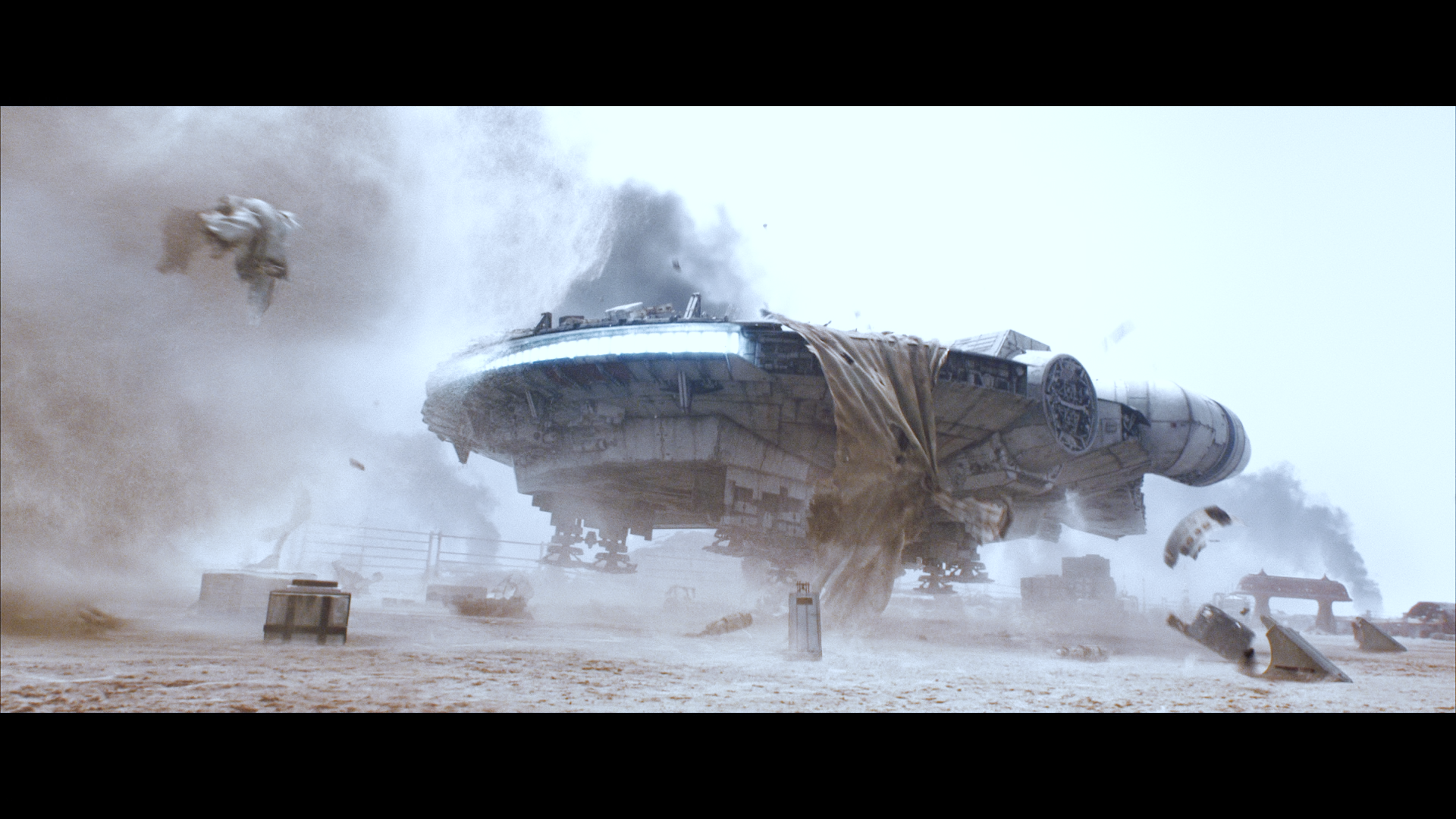 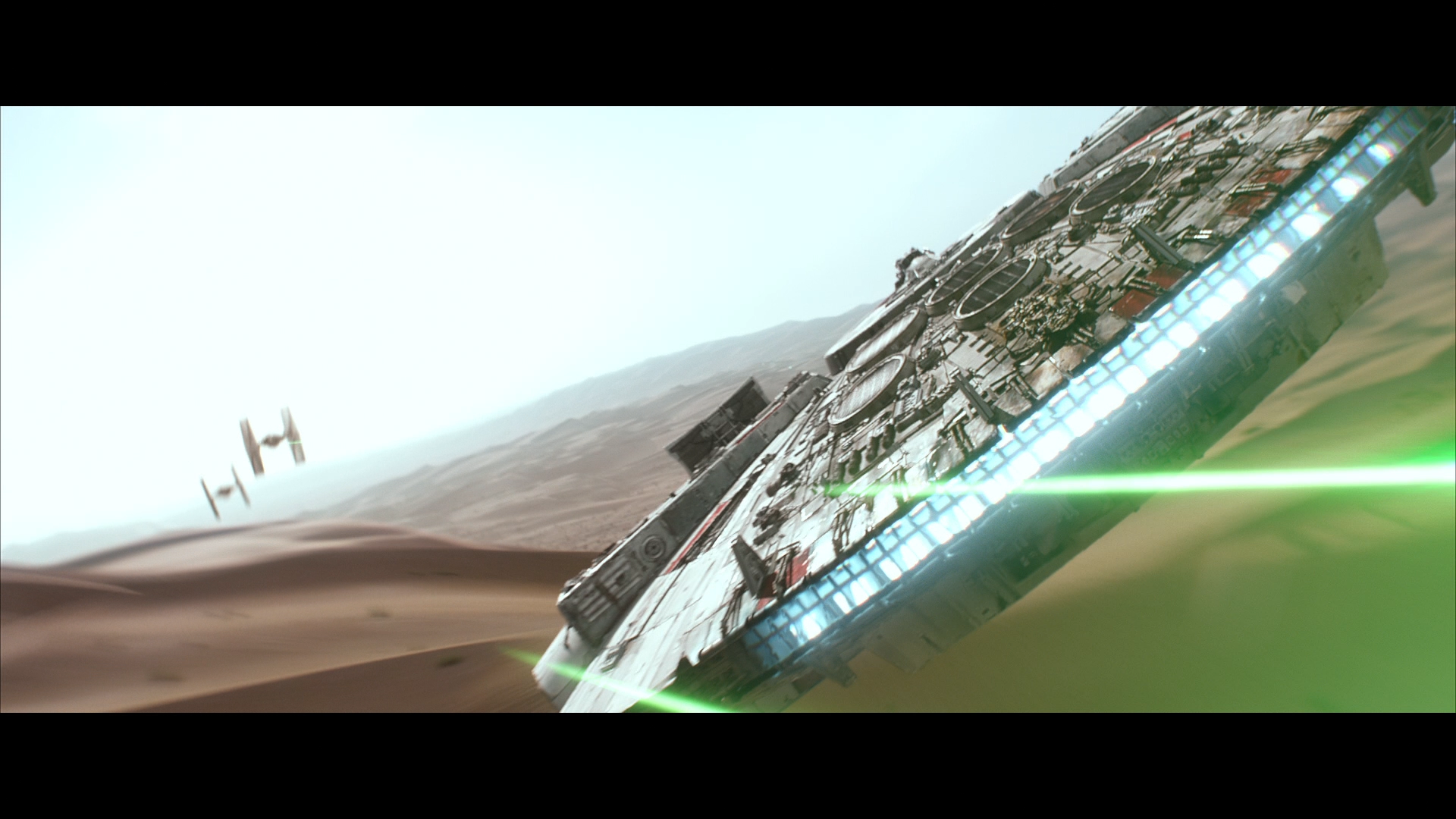 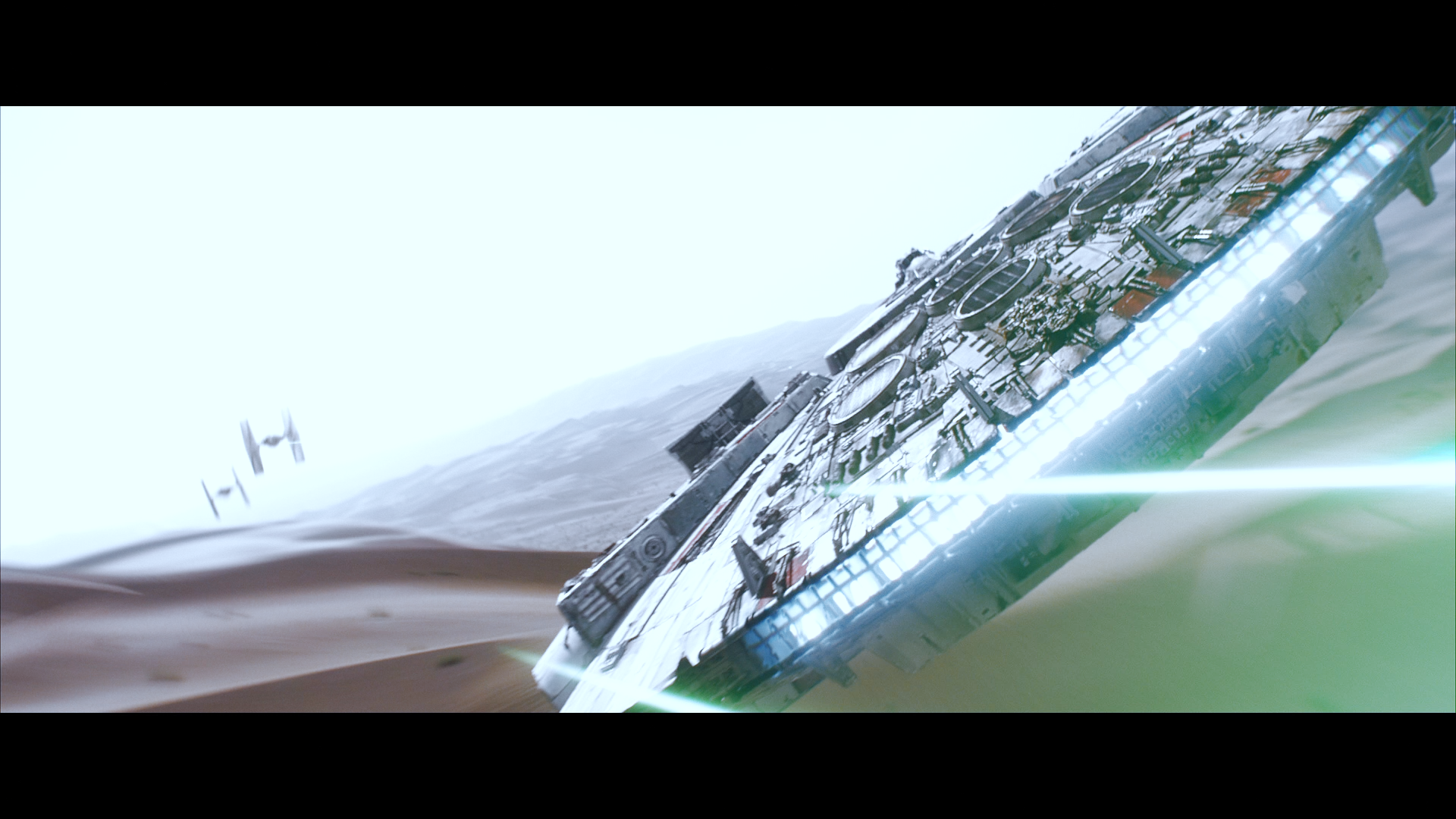 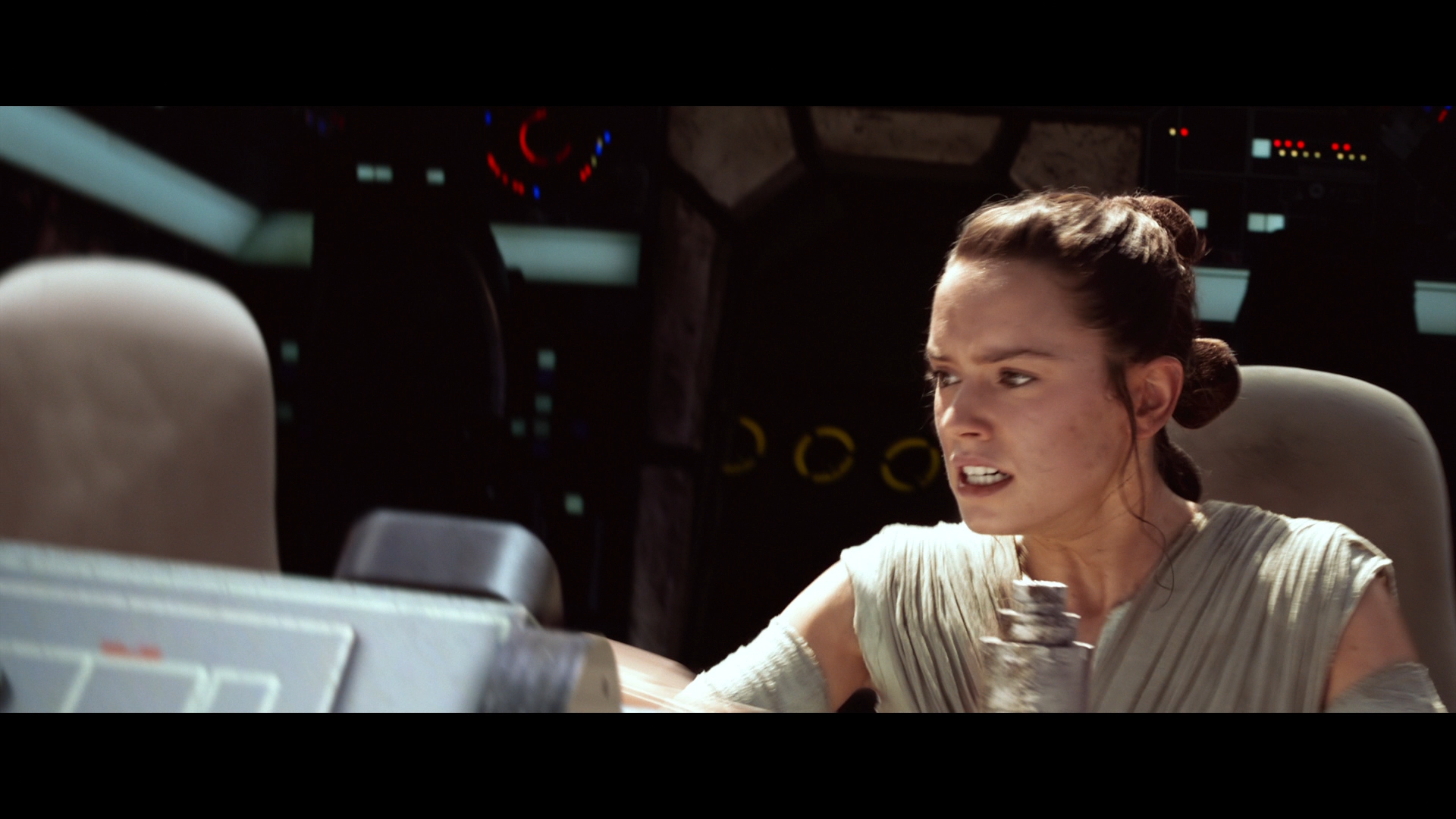 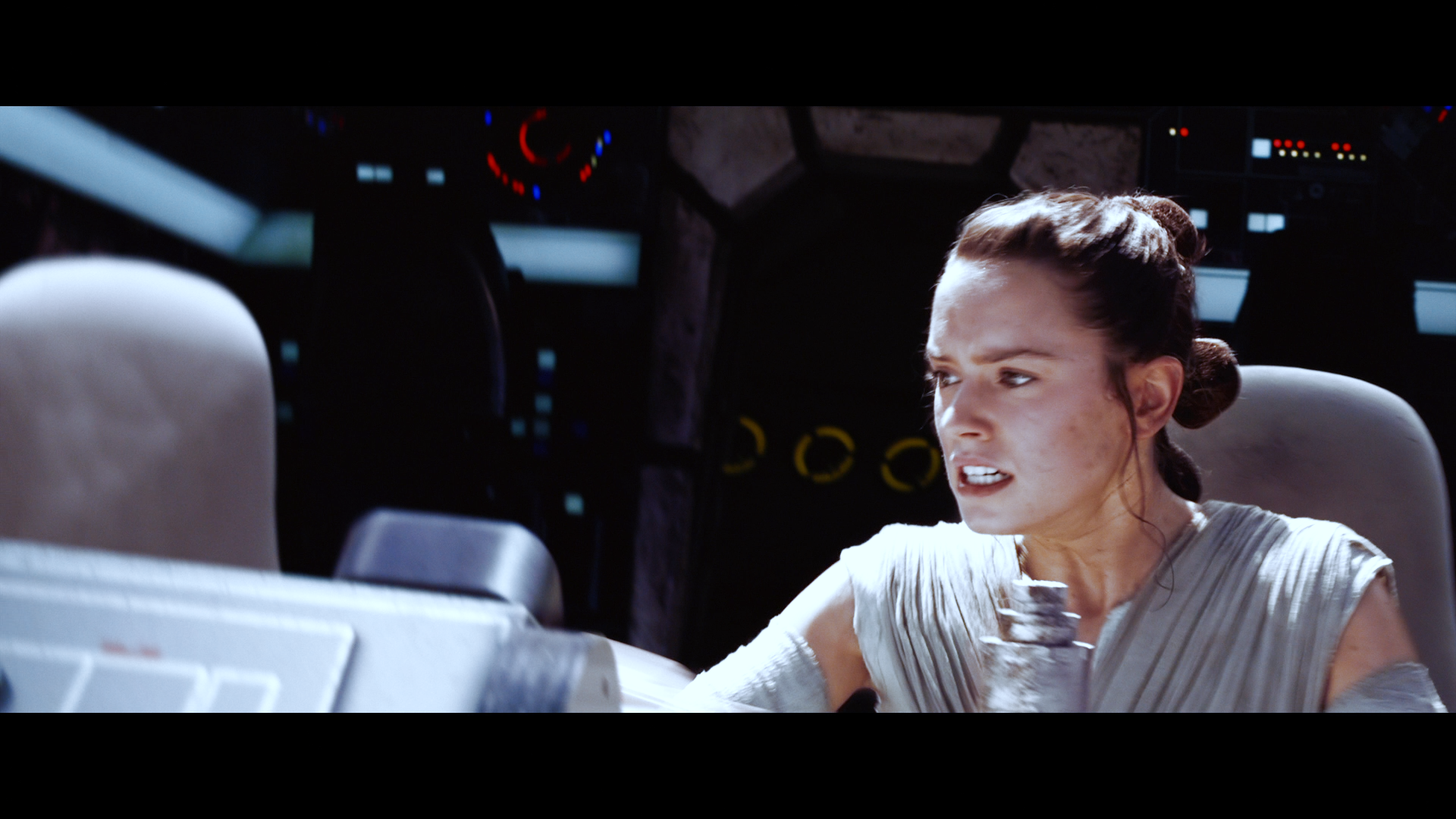 Not at all, I’m happy to get feedback on the work 😃

I’ve put the Dice scene into the edit, though there remains work to do on that front. Overall however the edit is shaping up and the color grade in in place. I’m pretty pleased with it, but there remain some things still to do, a few miscellaneous notes for small tweaks. The changes are small enough that I’m hoping to get it done pretty quickly and have a final render here after…(checks notes)…four and a half years.

But seriously, I’m running out of things to tinker with, so if anybody finds another deleted scene that must be included, kindly don’t let me know 😉

Oh, I thought you were physically masking out skin tones and fire and such.

Selective color is something that I use quite heavily in the Jakku grade, but even with fine control and selecting only certain hues at certain saturation/luminance levels it’s still really difficult to find settings that knock out the hues of the sand while leaving all of the skin tones and explosions, or at least enough to not look weird. In the end, I found that taking out all the color in the sand shadows would always play havoc with the skin tones, which is why I settled for settings that targeted mostly highlights and high midtones.

Just remove all the opening crawls. Screw it. Let the audience figure it out.

That may actually be a good change, at least for all films but the first in the trilogies.

Oh masking every scene of Jakku would work, but is it worth the trouble for a subtle improvement? To me, not really.

The link is updated with the background and prettification. I haven’t added glare to the windows yet, but everything else is about done.

Amazing, amazing stuff Nev! That arm reconstruction work is so seamless I had forgotten where the camera covered it up.

One thing I did notice that I should probably point out is that the little piece of metal that Han hangs the dice on seems to slide around quite a bit, might be a good idea to stabilise it in some way…

Definitely planning on it.

In regards to the face though, my suggestion for the simplest solution would probably be to just trim the clip and make do with a little bit of a loss of continuity between shots. Not sure how other people would feel about that though.

I feel like for such an important shot it should go as long as possible, as it’s the only one where we see the dice.

Anyway, I’ve updated the mockup to include the work on Han’s face and some scratches on the glass which will be toned down later.

The distortions on the face have literally given me a headache, so I’m calling it quits for now. It might be good enough if I put a bit of glare on the windshield near that spot, or it could be chalked up to distortion through the glass. What do you think?

You’re welcome and thank you for your thoughts!

Now what to do with the face…

Thanks for the update Hal on the state of things. So it’s simple, we just need to make Faraday work all night, since sleep is over rated. Also, just hunt down Jonh and convince him actual work, providing for family, etc. is obviously less important than clipping Luke’s hair. Oh, and Nev to work. My goodness! /S

(Of course joking, I just wish I had the tools and the know how to do anything.)

Don’t forget the saber shots! Though if it’s just the beginning of the film that is incomplete maybe the effect could be faded in throughout the film to imply a physical degradation of the crystal as well as a mirror of Rey’s struggle?

BTW, I vow to the best of my ability not to singlehandedly hold up the project - if it’s good to go apart from my last shots I’ll push them to the top of the list. 😉

Entire cockpit clean, now on to the surgery…