I’m certain ILM worked incredibly hard to get this effect, like they did with Tarkin, and that’s enough for me. Although I still think Sebastian Stan would have worked well, it’s a great thing that old Mark Hamill can still have a chance at playing young Luke Skywalker.

And I think they should know by now to stop burning money on this stuff that always fails and has to be fixed by amateur deep fake people online. Mark Hamill can still have the role, but when it’s so prohibitive (to the budget and the performance) they need to do it another way. Give him a beard, do practical makeup, do something else. It’s gonna age like milk. Evidently people haven’t complained enough.

Bo Katan scoffed at the helmet rule in her last appearance but here it seems she’s like the real cult loony.

Luke appearing to train Grogu doesn’t make sense within the story of this show?

Actions that serve characterisation, not characters that exist only to serve action.

This was a fun episode until the Rogue One garbage arrived, complete with needless lightsaber drooling and dead eye CGI de-aging. I guess they never really learned anything. 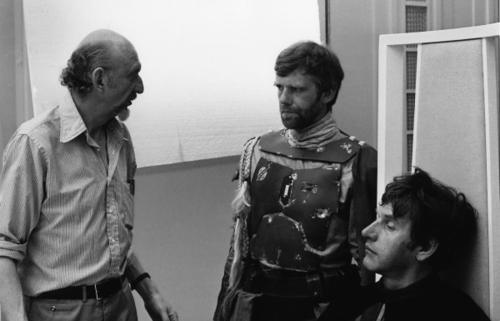 Damn all three of these guys are gone now, this sucks.

They should have looked at all the ones in Dark Forces II and brought in things like Destruction, Blinding and Deadly Sight.

He’s just older. Jason Wingreen sounds nothing like him in the 1980 version.

Clone Troopers all sound like Jango/Boba because of PT clone accent logic.
Mando sounds nothing like this because he’s not a clone.
Boba still sounds exactly like Jango in S2 because it’s the same actor.
But since this is a Season 2 spoiler thread you should mark it up. Everything else you said makes it unclear if you saw the show since that would clear all of this up anyway.

Maybe. The old Empire seemed to have no security on their systems when R2 just broke in.

How can it be after though… I don’t get it.

It’s about a new generation of the rogue squadron. Not the original generation.

But in this canon and this time period there is no Rebellion or Rogue Squadron at all? Why isn’t it set during the Mandalorian?

Agree. But why did it let him access it?

My only question is how that face scanner works. Doesn’t it need a biometric pass like a fingerprint reader? Is his face now logged in their system?

They referenced Sorcerer and Office Space? Now this is a good episode. Character beats and pacing were on point, plus the chase had a few classic Lucasfilm style gags. Seems my prediction of where the good stuff was kept is panning out.

ZkinandBonez said:
I am curious however about why they flipped a few shot shots. Seeing the episode again its clear that it’s just a few shots and not the whole scene as I previously assumed, so I’m guessing Famuyiwa just preferred one shot to be the other direction for the sake of a better sense of direction alongside with the other shots as they drive across the bridge.

Probably a reference to the classic ROTJ mirrored Boba gaffe. Or the one from ESB they removed with CGI. I’m kidding, it’s probably just to fix the action geography of who is where.

Where’s the Taika Waititi movie? That’s the only one that really gets me interested.

How can it be after though… I don’t get it.

I know it’s from the special editions, but every now and then I sort of like the new ending of RotJ.

I don’t, it has that pan pipes song and feels dumb like the ending of Independence Day or something.

They probably wont. Releasing a new series called Ewok Adventures is more in line with their model.

People still argued about it at the time though. Not sure what the expected, as if Palpatine was going to be his brother or something.

Ahh but there’s the real problem, and keeping all of the ESB twists intact would require far more creativity.

The way they’ve been revealed certainly implies a connection but it seems like a waste of so much lab research. The actual clone bodies must be something else. Maybe some kind of Reborn project.