I think she clearly doesn’t sound like Ridley, but hey knock yourself out.

Omg can we not do spoilers. Literally waiting to get home to watch show and things are being spoiled/revealed on a non bad batch spoiler thread?

I don’t have many pet peeves, but this is one.

Why didn’t you drop everything in your life to watch it within 12 hours of its release, huh? Totally your fault.

(I’m with you, by the way. Maybe we can wait a day or two before mentioning spoilers?)

It’s a fairly inconsequential detail in the episode. I wouldn’t even call it a spoiler.

I’ve apologized and won’t do it again, but let’s at least understand that I wasn’t out here dropping major details on the episode and I had a valid reason to share the small detail that I did.

Understand that people don’t like other people deciding what is and isn’t a spoiler for them. Just tag and hide it next time.

What thread do you think you’re in? That line’s not even in this edit.

If it’s just the odd word can’t they be found within the movies?

The Crackling Saber is on hold as I got a lot of negative feedback with various scenes. The effect changes so much between day/night and with distant and close-up shots so it takes a lot of tweaking. I just don’t have that amount of time to invest in such a consuming thing atm as I’m trying to get through the other 19 shots I’m working on, plus my computer keeps overheating every time I use After effects or Premiere Pro for a long period which isn’t helping at ALL!

It’s a real shame this isn’t working for you. For the record, I thought it was looking really good in every iteration you posted.

Apropos of nothing, but with the improved puppet show this project has taken the prize of ‘best single change of all time’ from Adywan’s ESB Revisited and the AT-AT falling on the AT-ST.

Just wanted to say that, now back to your regularly scheduled discussion.

Maybe I’m just a killjoy, but the Kylo one doesn’t sound any better to my ear than someone doing a barely passable Adam Driver impression. To the point where I actually thought it was whoever had made the video introducing it first, until I realised it sounded “off” in the way that AI voices can’t quite get the inflections of sentences right.

I would say that it does actually sound just like Adam Driver, just happens that the inflection makes it clear it’s AI. That said, there’s a difference between what Adam Driver sounds like and what Kylo Ren sounds like. But I’m not going to be a killjoy about it at this point, if we do get the chance to make up some new lines, that’d be cool. But ultimately we won’t know if it’ll be usable until we hear it (seems like the AI can be hit and miss).

I think the post is saying that after the plinth is smashed and the helmet lands in the snow, it gets placed in the travel case instead.

I know, but what I’m saying is you still see it on the column in his coverage (there’s a cut shot in the BTS where he places it there).

Nope, you can see he has the helmet on the pillar that they destroy.

That would be very possible if it were a simple zoom or panning shot, unfortunately it’s much more complicated so significant castle damage would probably have to be modeled in 3d and tracked onto the existing shot. Needless to say it’s a bit beyond my capabilities.

A thought I had was potentially just tracking some cracked/crumbly textures onto it, so at least it doesn’t look so pristine.

I believe technically the English alphabet is canon. That said, I think images would be much better than text for a variety of reasons - much easier to take in and understand in limited screen time. So at that point you might as well just use aurebesh to go along with the images which will be the real meat of the effect.

Appeal to gamers by changing the action sequences and lightsaber fights into a first-person perspective.

Appeal to gamers by inserting Sc. 38 Reimagined into ANH.

Nah I was mostly referring to everybody else’s discussion about this Lando audio. It sounds great, but I’m not sure the end of this movie is the right context for it since they technically aren’t going up against the First Order.

The truth is it literally does not matter.

I wonder if there’s some additional Lando dialogue that could beef it up. As is he says like two things. Depending on how one would integrate it that might be fine, or it might feel really short.

Anakin has no ghost at all in ROTJ.

Hey now, I’ve been suggesting this for a while.

I hope they put out more Biomes stuff. That’d be the ideal footage to use for the kind of montage we’re talking about.

Sounds pretty legit. I would say he probably sounds too distorted, but I assume this is necessary to cover things up. If at all possible to tone it down though that’d be my note.

Keep in mind there’s a couple shots of Lando in hyperspace from the trailer too.

Yeah I see. Took a look at the original and definitely does speed up at the point it swings around the castle. Would it be possible to slow down a bit to even it out or would that fuck up the tracking and all that? Wouldn’t want to make more work for you (and I might be the only one this bothers). As well I suppose if we only use that moment then its faster speed wouldn’t even be noticed.

Here’s the establishing shot replacing all three of the previous shots.

I ramped the speed another 25% or so, and keyframed the vertical movement to play with the extra space and make it more dynamic. The only thing that’s missing are the TIE fighters.

If we wanted to keep the final TIE forest shot, it might work to just cut the first part of the castle shot and shift it to make room.

This is quite good, very nice work. My issue here is with the speed ramp and the digital tilt. The movement speed isn’t as consistent as I might like and there are a couple moments that feel too fast, first being the tilt which could use just a little ease and then the ramp which feels too fast when it swings around the castle (not sure if you sped up more here or if the footage just does already). I wonder if honing in on a specific portion of the footage might work better with a more even pace of movement.

Or maybe just the simplest thing would be to put out a version with the even paced movement and the full frame and then Hal and others can pick which portion of the footage they want to incorporate (whether as one shot, two shot, or three or whatever).

Who was it that did the little purple/blue flash in the saber? Is that available to grab?

Also, sherlockpotter, did you stitch the very end of the “I am all the Sith” shot onto the end of “no match for the power in me”? If so, bravo, because I can’t tell unless I’m reverse engineering it. lol

All credit where it’s due: sade1212 is the one who did the incredible work restructuring Palp’s dialogue; I just stapled my line onto the end.

On that note, how do people think this version sounds? Like Hal said before, this line especially has to be pretty much perfect: https://streamable.com/mdw8w1

Oh, and I also nudged the timing of, and added a wee little exhale after, Rey’s “I…” to fill in the gap a bit (from removing “And-”), but that can go if people don’t like it.

In the interest of making the changes to the finale as perfect as possible, I just want to double check if anyone has any issues with the demo I shared here? If no one mentions anything, I’ll assume it’s good enough and I’ll send the audio to Hal.

Just want to make sure people had the chance to see this and weigh in with any potential criticisms, given how quickly this thread moves!

I know there’s not a lot of space to work with, but my only note would be a slight tad more of a gap before “a scavenger girl…” If not really feasible, I’d say this works just fine.

It should be possible to have Dooku and Sidious meet on Exegol at the end of an AOTC edit. This would enhance continuity with the ST.

I actually really like this idea. Was just wondering if there was a way to incorporate Exegol into the PT in some shape. Would be hard to do but cool to see.

A Work-in-progress on color correcting and forest-ing the Vader Castle shot: 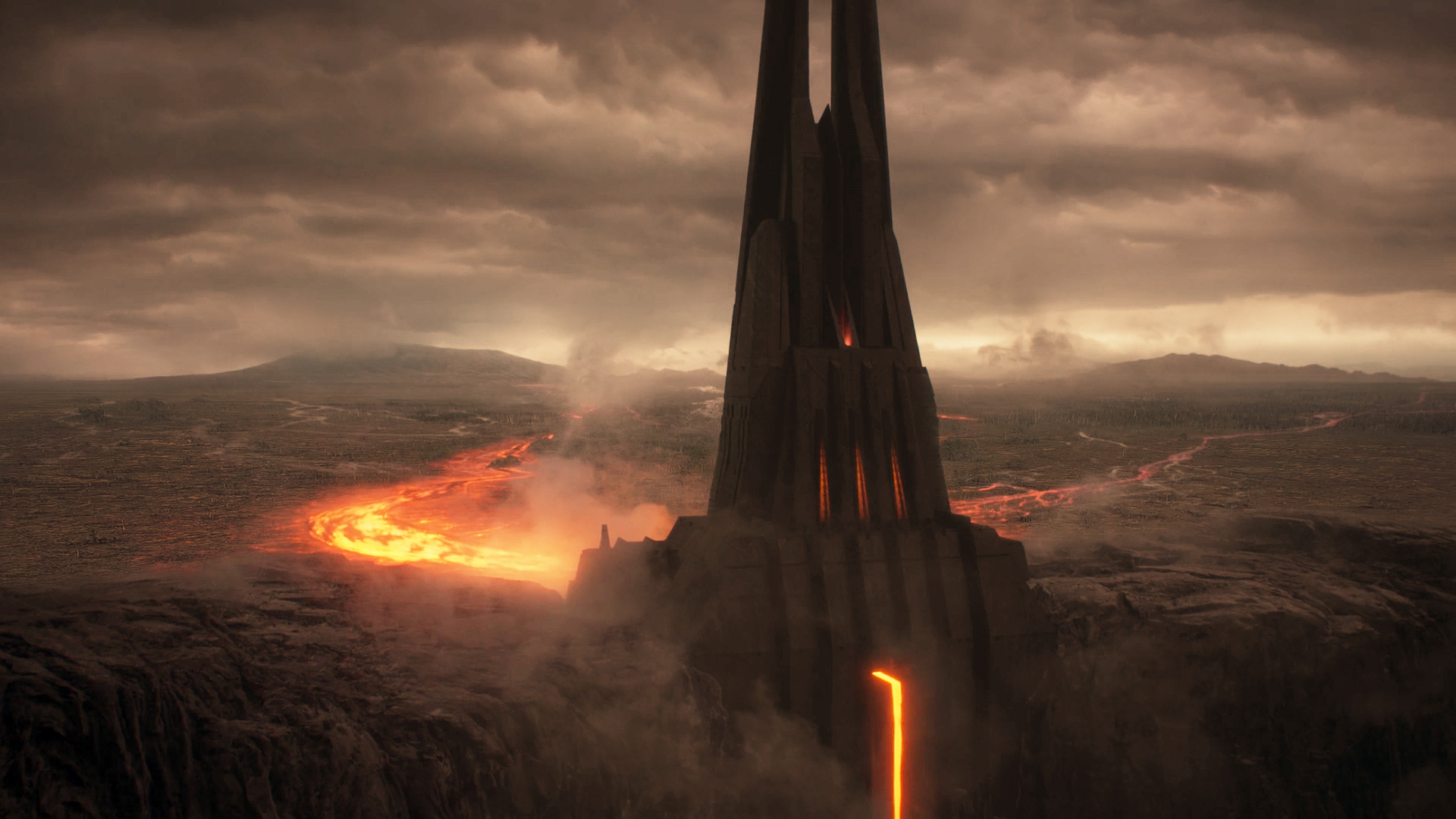 Obviously the lights of the castle will be darkened.

As far as the shot length, I’ve sped it up 1000% (10X speed) and that’s still not enough to simply replace the castle from the original 3 shot establishing sequence. I don’t want to speed it up more since the smoke and fog looks odd (and I’ll have to re-track a slower version of the lavafall regardless), so I’m thinking that it might be possible to use this one shot to replace all three.

Oh I’ve been thinking since biomes came out that a one shot solution would be ideal. Great work!