I disagree about a 4K scan being pointless. It doesn’t matter what resolution the original digital source was. The print needs to be scanned to preserve the unique version of the film, and the scan would benefit from the higher resolution, which better reproduces the grain on the print. Scanning in 4K also means it can be released in native 4K for those who want to watch a 4K version.

TPM has what, 70% or more shots with digital effects? That’s most of the film that’s maxed out at 2K. But it’s still worth a 4K scan of the print.

Probably the funniest thing in that SE doc is Rick McCallum not knowing what he’s talking about. “The original mix was so complex, so good, but there was no technology to actually hear it.”

The biggest change in ESB was the color grading. Where Hoth was originally white, in the SE it is blue. I am torn on the change, because I grew up with the SE color grade and I never hated it.

It’s not just the snow. The blue tint has been applied to the entire film & it changes all of the colors for the worse.

Yeah, even the original prints seem to have blueish snow in a few sequences (just from what I’ve seen in scan previews). It seems they wanted the whole film to have a consistently cold look in the SE.

None of that is necessary. The ratio on the film itself is meaningless, especially considering that a scope film isn’t physically wide, and because the ratio is sometimes going to vary shot to shot.

I just want to say that I thought you were just asking about historical accuracy of the aspect ratios. Just because it was projected with a 2.39 gate in 1977 doesn’t mean 2.35 would look incorrect. As was already mentioned it’s just semantics and the difference is negligible. As far as displaying a 2.39 image on a digital projector, I’ve been curious if cutting a matte out to stick over the projector lens would work. I don’t have a projector so I’ve never tried it.

As far as I can remember, this original theatrical mix is different than the one most of us are used to around the point where Dr. Menard shoots the zombie as it’s getting up, the end of the “shark vs. zombie” scene, and the zombie invasion of New York (the transition there happens after “…Manhattan. General Stein…” and the anchor’s scream sounds very different in the original theatrical mix).

Very interesting to hear. Who knew a movie with such a low budget would get so many changes post-release. Regrading and mixing’s one thing, but changes in voices and foley is just ridiculous.

Reminds me of when I saw the Evil Dead 4K restoration in theaters. It had an all new soundtrack and it felt far too grandiose for the original micro-budget film.

Ditto on the new Evil Dead score. Was much too much for the movie.

Gotta get my hands on that 4K version. I do wonder if they’re still using the version that’s digitally tampered with to edit out one of the crew members showing in a one of those blink and you’ll miss it shots. That’s what I heard on IMDb anyway.

The 4K version still has the changes on the BD release with some exceptions. What comes to mind is that the lights in the background of the “they won’t let us leave” scene in front of the mangled bridge are no longer erased. I think Rob Tapert standing in the background of the bridge crossing shot is still erased, but the crewman’s reflection in the window inside the cabin is not erased anymore. The small lens flares in some shots are also no longer erased.

Regarding Palpy, I mostly saw the '04 DVD when I was younger, but started watching P&S VHS copies eventually because I ended up liking the originals and didn’t own the GOUT DVD. Suffice to say a younger viewer who grew up with the PT and SEs should be able to see why the Emperor replacement is so poorly executed it’s embarrassing. The original Emperor is a small but incredibly memorable performance, and it outshines the phoned in Ian shoot by a mile.

And Shaw makes way more sense than Hayden in ROTJ.

So essentially keep the scene as is but cut out all closeups of Ben’s cloak.

I mean, burnt skeletons and a bloody severed arm, I think a similarly realistic depiction of Ben being sliced in half may have gone beyond the realm of PG.

Wouldn’t it be better to have Anakin fade away in ROTJ for consistency? Then Luke would just burn the suit to honor his father’s redemption or whatever.

That ruins his ghost showing up & revealing his redemption, which is why he doesn’t disappear as-is.

Yes but I was just referring to consistency, since Duracell brought it up. I personally don’t see any issues with how the force plays out in the films.

EDIT: You know, one interpretation could be that Anakin’s body stayed because his body was corrupted by the dark side, having been a Sith Lord. The Force essentially rejected his body when his spirit became one with the Force. Sort of a rebirth. Perhaps this has been thought of before.

Wouldn’t it be better to have Anakin fade away in ROTJ for consistency? Then Luke would just burn the suit to honor his father’s redemption or whatever.

If he didn’t know what happened how is it silly? It’s not like he does anything inherently silly. The cloak falls and the body appears to be gone. Vader approaches the cloak and steps on it in pizzlement, visually showing the audience more clearly what happened. It may seem obvious what happened without that shot being there, but I’m certain a first time viewer could miss it if that shot wasn’t in there to clarify it visually.

he was simply checking the cloak to make certain the body was completely gone.

Also, not sure if serious…

I was half serious and yes I know its silly. :p

The Silver Screen Edition should not be used as an end all reference. When making that preservation, anything was up to their choice. I don’t know off hand what aspect ratio they used for it, but I would bet on 2.35 since most home video releases use that as the standard for scope movies. But if you’re a stickler for details, 2.39 I think is correct.

YES. He should know what just happened.
I brought this up in the Revisited thread (years ago, probably). Don’t remember how it was received by anyone.

Funny that a change I’d like to see actually removes something from the film rather than add to it.
It works fine In Star Wars, but doesn’t make sense in A New Hope.

I’m not figuring out why him stepping on the cloak doesn’t make sense in the context of the “saga.” If we’re to assume Vader knows that Kenobi could do a Force Ghost Poof™, he was simply checking the cloak to make certain the body was completely gone. Otherwise, I don’t recall any of the other films, PT or OT, referencing Force Ghosts as a thing outside of Ben showing up in front of Luke.

These posts were the best way to start the new year. Thank you.

With regard to 4K83 - that was scanned from a show print that was struck directly from the negative, if I’m not mistaken, which means while the details are extremely clear and clean, the color on the print doesn’t reflect what an actual color timed release print would look like, so unlike 4K77, you can’t just white-balance it to the sprocket holes;

Not only that, but it being all red faded makes it more complicated of a source, and I remember Williarob mentioning that he tried using Dre’s color restoration tool on it. Not sure if he ever posted the results.

best thing to do there is to use the LPP scan as a color reference to match the 4K83 show print scan to. Frankly I’m a little surprised that hasn’t been done yet.

I’ve been in the process of doing that for oohteedee for a while now. It’s taking longer than I had hoped, but I’m halfway and it’ll be done eventually. Keep a lookout. 😃

All three Star Wars films would’ve been shown in 2.39 on 35mm, and 70mm blow-ups cropped to 2.20 of course. The reason there is conflicting info on scope aspect ratios is because standards changed a couple times I think. To my knowledge, any film made in 1970+ was projected with a 2.39 gate. This wiki page actually has the history here:
https://en.wikipedia.org/wiki/Anamorphic_format#Aspect_ratio

Don’t purchase any fan projects. You can get them for free online. I don’t have HAL 9000’s versions, but hopefully someone here can help you out.

^ While 4K83 has no current release that may be called theatrically accurate color, 4K77 v1.0 is close. It wasn’t corrected to a projection, but the soundtrack on the film was white balanced, and what we are left with is something that is similar to the projected print, compared to the evidence I have seen. The fact that the Tech IB print is unfaded made that simple enough, and the 4K83 print had no such luck, since it was a red faded Eastman print.

Regarding 4K83, there will eventually be a release with colors that approximate the theatrical timing, and will hopefully be done sooner than later. I’m working from the colors on the unfaded LPP scans they have, correcting for the excess of blue in those sources.

As far as the color corrections that have come out for both restorations go, they were never intended to be theatrically accurate IIRC. They were corrections made by a member to suit his personal tastes, and those just sort of became the defacto colors until more corrections become available in the future. 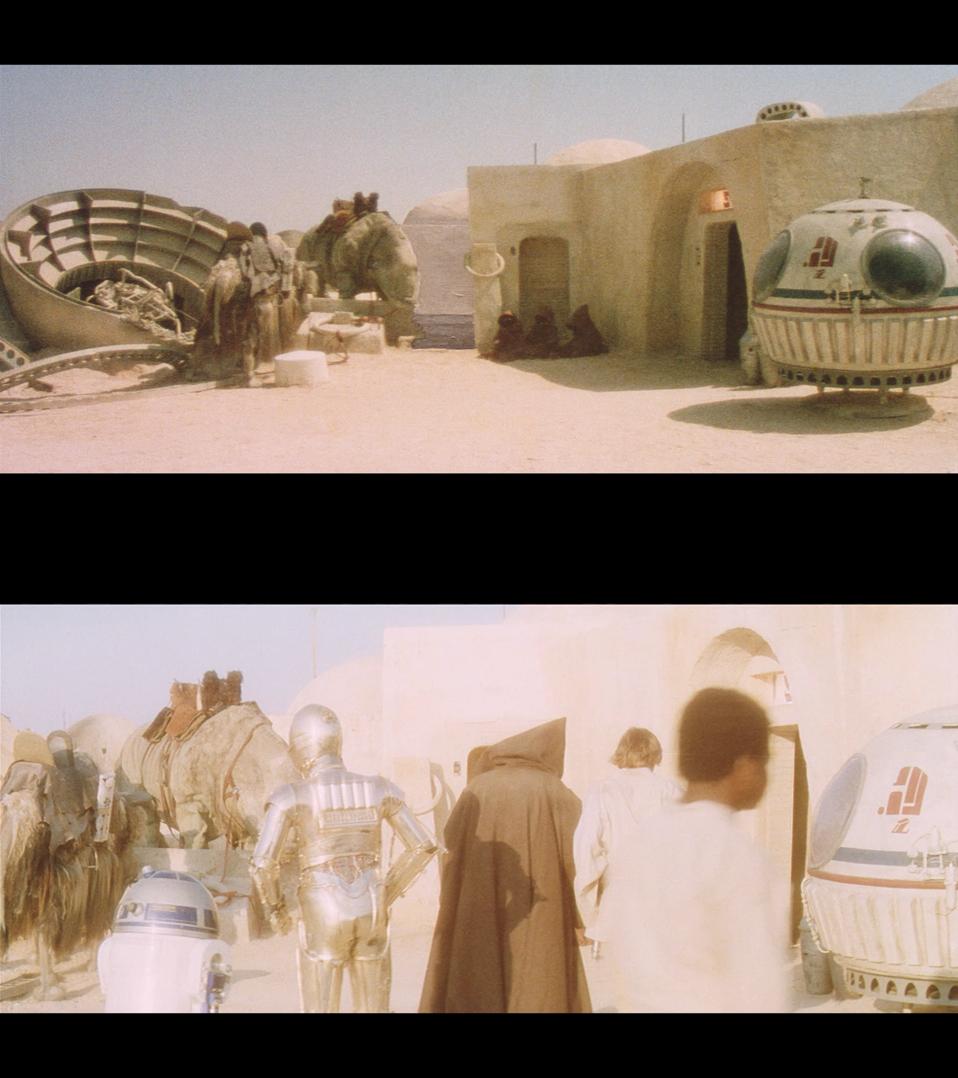 IMO it will take several months to have confidence we’ve identified all changes unique to the 19SE and come up with LUTs for a theatrical regrade. The UHD’s will be released at just around the time we’d be in any position to do anything useful with the 19SE, even if we work our asses off from now until then.

And this is all assuming the UHD’s do not contain even more changes. But since at this point Disney’s in charge of the content (and the timeline would be pretty much impossible anyway), I think the crazy revision train has finally stopped. The Maclunkey cuts are the final destination. Welcome to Travesty: Population 3.

I’ve decided that the Maclunkey bit has one nice use. A frame of it can replace that single frame of the other Greedo that has always looked so out of place (if you actually notice it). Other than that I’m sticking with the Blu-ray cut (as the best of the SE cuts).