Because it’s not uploaded anymore.

I don’t like it when villains in movies are just evil for the sake of being evil, that makes a prime example of bad character development and makes the villain really shallow, boring, uninspired, and just plain uninteresting.

And I hate it when the villains motive is the same old same old “tAkE oVeR tHe WoOoOoOrLd Mwahahahahahahahaha!!!”

I really like when the villain actually has a relatable motive, and the viewer is able to sympathise with them. Even better, is a film with no villain at all.

Overall a really tired trope: the villain that’s just simply a villain that wants to take over the world/universe and enslave all of humanity and has no redeeming qualities whatsoever.

Also, how about a film where the good guys lose, sad ending, and the (relatable and well developed) villain wins.

A villain who is “evil for the sake of being evil” and whose ultimate goal is to take over the world may be a tired trope, but it isn’t an unrealistic one. Fact of the matter is that corrupt individuals who seek power for the sake of power exist, even if they aren’t cartoonishly evil.

The “misunderstood” villain is just as tired a trope, and I’d even argue that particularly “relatable” villains have been a trend in the past couple decades. I think you’re looking at this with too much of an absolutist mindset. Yes, some villains are shallow and underdeveloped, but sometimes a villain’s simple characterization is a stylistic choice. What really matters is how the character serves the story.

And I’m not saying that you can’t or shouldn’t have a preference for certain types of characters. I just think it’s good to keep an open mind about these kinds of artistic decisions. Sometimes complexity is a good thing, sometimes simplicity is a good thing, and both can also be bad things if not done well.

And the good guys basically lose in The Empire Strikes Back. 😉

I’m really feeling hopeful for President Biden. He’s now putting the US back to the climate plan. Most importantly, he’s not Trump.

This image is hilarious. Thanks for the laugh.

Yub Nub is superior because of the part when Anakin’s ghost shows up.

So in theory, we can put the extended cut back together ourselves if the new color correction is worth it, or just to have it in 4K. 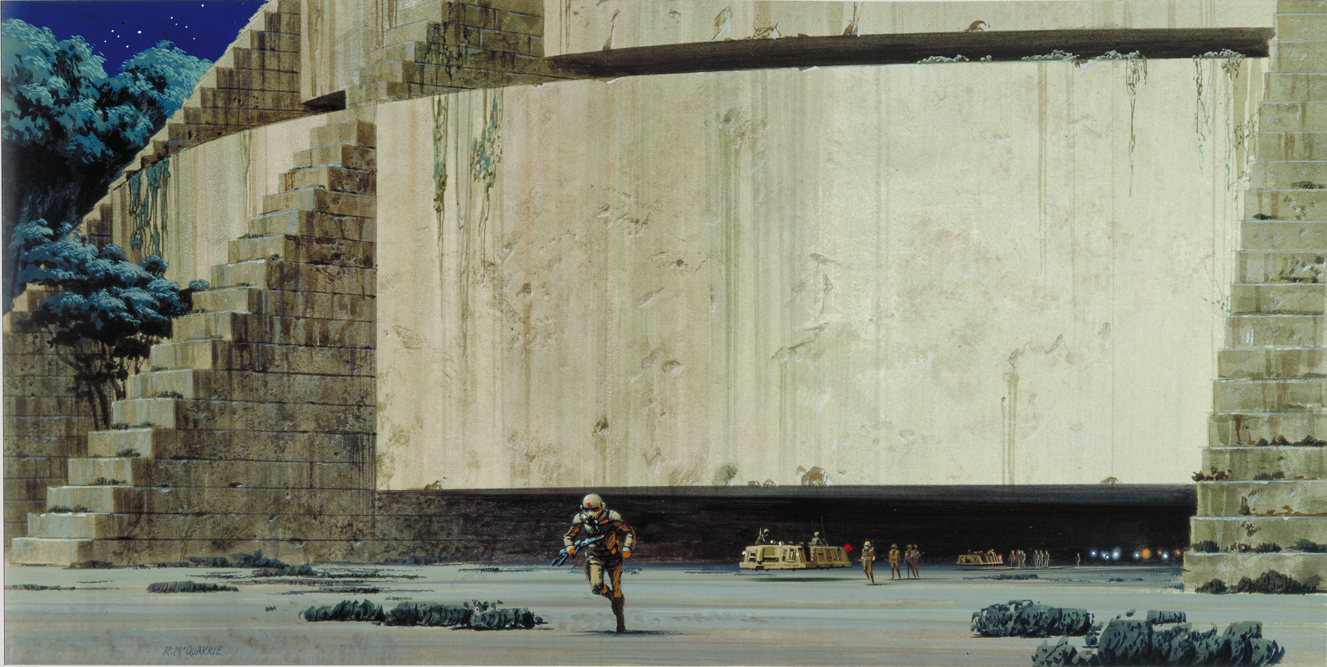 “I had done squares, almost Mayan-like. I put it together, showed it to George…and he sat there in dead silence, which means he doesn’t like something. Then he said, ‘Would it be possible to make it look more like Ralph’s?’ So I went back and repainted it to make it look exactly like Ralph’s painting.”

Funny how the SE shot of the temple looks less like Ralph’s concept painting than the original. But of course, that was George’s vision all along. :p

Han shooting second makes him less like a cowboy. In a classic western shoot out, the villain generally draws first. Greedo drew first, and was holding him at gunpoint throughout the scene. In a western, if the villain shoots first, the hero gets shot. The villain draws first, so the hero has to react and draw faster to beat the villain to the trigger. Greedo made it very clear he intended to kill Han at that moment, so Han took his opportunity to shoot first.

Why is it so hard to meet women on the Internet? […] Oh and don’t say dating apps because those are fuckin’ horrible. You don’t even know anyone there, how are you supposed to know if you wanna date 'em? I need an opportunity to get to know a person first.

I’m not gonna say I have any better options, but the internet is a terrible place to “get to know a person” regardless of what website it happens on. I’m also not saying that meeting people online is a bad thing. But the internet wouldn’t be my first choice for looking for dates.

Keep in mind that I’m not talking from any actual dating experience. Just that the internet is constantly deceptive, whether a person intends to be or not.

But, I don’t disagree with the sentiment. It would be nice if meeting people on the internet was easier. Maybe try to engage in other communities that interest you (not on reddit).

I’m not super knowledgeable about interlacing, but I thought deinterlacing involved combining both fields together, as they would originally alternate. How does that ‘lose’ the second field?

I feel dead inside.

I’m not saying I’m going away as much as I just probably won’t be around as much. This bs is getting to me.

I was given the Criterion of The Blob as a Christmas gift (among other non-Criterion movies). It’s nice to finally have that on the shelf.

Have a lovely Christmas!

What a wonderful sight to wake up to. oojason giving out negative waves like they’re candy.

Just to clarify, that isn’t a good thing.

What a wonderful sight to wake up to. oojason giving out negative waves like they’re candy.

Isn’t Techniscope sort of like 16mm? Could you squeeze HDR out of that?

The size of the film has literally nothing to do with whether or not HDR can be “squeezed” out of it. Techniscope is a two perf system that effectively halves the amount of film used, since you’re taking standard 35mm film and recording a widescreen frame to take up only two perforations rather than four. So as far as the negative is concerned, I’d say it’s comparable to any film shot on standard 35mm and matted to 1.85:1. Though the Techniscope process might ultimately produce a lower quality image than standard 35mm normally would, I’m not sure. As for you’re 16mm comparison, note that The Evil Dead, shot on 16mm, received an HDR presentation with Dolby Vision compatibility in its 4K release.

The point I’m trying to make is that there’s just as much usable color information in GBU’s Techniscope negative as any other color film negative. HDR is just a digital system that delivers a higher digital dynamic range than previous formats do. It’s up to whoever is creating the HDR grade how much the dynamic range is expanded.

None of that even matters though, since I’ve read Kino’s actual explanation for the lack of HDR and that isn’t it. Apparently the 2014 restoration was finished as a 4K SDR master (I’m still unsure if this means it’s 10-bit SDR or 8-bit SDR), and when Kino considered releasing the film in 4K HDR, they claim the prospective cost of creating a new HDR master was too expensive so they decided against it.

What the fuck dude

This is probably the most ridiculous thing I have read on this site. I have zero respect for these kinds of actions.

Why doesn’t a former Mod get their Mod status removed???
Why did you come back and basically rage ban Handman???

Thanks for the affirmation Dek, since oojason seems to think he is somehow doing you a favor by baning handman… (and to be clear, i am not being sarcastic, i know internet words can be hard to parse sometimes)

Yeah, I don’t want oojason’s mention of me to imply that I’m somehow in favor of this dick move.

What the fuck dude

This is probably the most ridiculous thing I have read on this site. I have zero respect for these kinds of actions.

Why doesn’t a former Mod get their Mod status removed???
Why did you come back and basically rage ban Handman???

No HDR because they couldn’t squeeze that out of Techniscope.

I don’t even care about watching in HDR personally, but if that was their explanation then that seems like a load of crap. Techniscope is still film and would benefit from higher color depth. I’m assuming they mean the 4K version will remain 8-bit SDR.

I was waiting for a 4K of this to happen because the HDR might make color correction easier. I guess we’ll just have to hope they fixed the missing color information as it is then.

Geez Spuffure, you are a revolving door when it comes to entering and exiting this forum.

While the best scenario would be putting Wingreen’s voice back in, I think the scenes would benefit from a current redub from Morrison. His original recordings from 2004 sound very phoned in (hmm I wonder why 😉), and almost as if he wasn’t even given context for the lines we was delivering.

They think you’re into older women.