Beyond the added subtitle, is there any appreciable difference between the theatrical & '81 cuts of SW '77?

Nope. New crawl/flyover is the only difference.

I’ve searched 'til My Spleen is sore, but can’t find…
What am I missing?

I believe the latest releases of 4K83 haven’t made it to the Spleen. You should register at thestarwarstrilogy forums if you want info on how to get them right away.

If it’s not in the film, it isn’t “known” to the audience.

Sorry to say, but the audience knew the word “Ewok”

The obscure novelization giving info on how the Emperor gained power & the massive advertising juggernaut plastering EWOK on everything are very different situations.

I agree; I was just pointing out that the principle he espoused is definitely false as a general principle.

No, it is not false as a general principle. There may be occasional exceptions, but “Ewok” is not one of them:

Yeah, people had to go out of their way to read the novelization to find whatever obscure junk lies within. “Ewok” was everywhere, especially considering how strong the toy line was.

Not to mention the closing credits. 😉

As SilverWook mentions, “Ewok” appears in the film. Things that do not appear in the film or are not implied in the film are not known to the audience in general circumstances.

I was actually surprised to realize I didn’t have more copies of anything else.

But what holds his glasses up?

Evil Dead trilogy. I own three copies of each one. 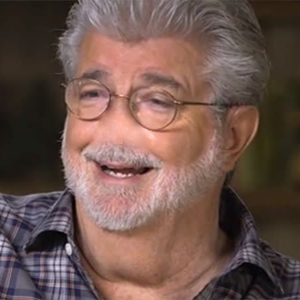 Yeah, people had to go out of their way to read the novelization to find whatever obscure junk lies within. “Ewok” was everywhere, especially considering how strong the toy line was.

I’m not sure I like the idea of a bittersweet ending to the trilogy, but ROTJ would’ve turned out much better had Lucas and Kurtz worked out there differences with a little more compromise. Gary Kurtz was probably one of the most important people in the creation of Star Wars and Empire. He believed in the material. Lucas probably should’ve gotten Irvin Kershner back to direct too.

It’s in the ROTJ novelization. Along with the name “Palpatine”, which isn’t in the film of ROTJ either.

Sorry to say, but I don’t think the Novelizations really matter. The vast majority of audience members don’t read those. If it’s not in the film, it isn’t “known” to the audience.

The Emperor’s guards are called “Royal Guards” and Luke calls the Emperor “your highness”, but we already knew in 1983 that he’s a politician who got the legislative body to vote absolute power to him, not someone who inherited a throne.

Another thing the PT got wrong.

As I said, it was already known in 1983 that Palpatine was elected to be the Republic’s head of state.

When was this stated in the films?

I always thought the title referred to the Jedi, plural, as an entity. Luke becomes a fully fledged Jedi knight, which means the Jedi have returned. But, that said, I love Ray’s idea about Vader. A title can have multiple meanings, too.

According to the very next post, Prime does not. I hope someone can confirm itunes though.

The BD audio doesn’t have major changes like The Wrong Trousers, but it sounds like it might be a different mix. For example, when Wallace is drawing the ship with him and Gromit inside, Wallace is mumbling to himself in the BD track, but he isn’t making any sounds on the DVD that I can hear.

In my opinion, the 1.66:1 framing feels way too tight in many scenes. The crop isn’t even applied consistently, leading me to believe it may not have been intended to be masked.

A Grand Day Out is now up, speed corrected to 25fps, with speed/pitch corrected DVD audio and Blu-ray commentary. 3.27GB MKV.

I may do A Close Shave as well, but if I do I’ve decided to leave it in SD because of the cropped Blu-ray.

Not only its genre, but Star Wars was a lot more juvenile and simplistic than a lot of popular cinema in the '70s. The lack of cynicism resonated with audiences, but no-fun-allowed critics didn’t like it because it wasn’t that deep. I haven’t seen Annie Hall yet, nor have I gotten around to seeing any of Woody Allen’s films, but I have a feeling his work had more thematic depth, which the academy would obviously gravitate towards.

A month ago today, I stop by a local thrift store and find an MGM DVD of 2001: A Space Odyssey. Less than a month later, I upgrade 2001 to Blu-Ray via an eBay lot that also included the soundtrack on CD. And yet I’m still keeping the DVD because of it’s original 70mm six-track audio.

Just in case you didn’t know, the newer Blu-ray actually includes the original audio mix, not to mention it has a much better transfer than the older Blu-ray.

The OT seems to have gotten a slightly wider aspect ratio with the D+ version.

Looking at these screenshots it seems to be a case of cropping. The D+ version has less picture at the top and bottom: http://www.framecompare.com/image-compare/screenshotcomparison/DYLPLNNX

On this one there seems to be more picture on the sides though:
http://www.framecompare.com/image-compare/screenshotcomparison/J1B2FNNU

I’m sure they framed each shot independently. Those 19SE frames come out at ~2.39, so it’s correct at the very least.

Interesting that the '95 VHS has the correct pitch. I wonder why more care wasn’t taken in later releases.

By the way, I’m working on A Grand Day Out now.

If you’re from the US, your VHS would have been pitched lower of course. I didn’t know I was watching it with the wrong pitch until I made this thread and the correct speed became a point of discussion.

If you want to slow it to 24fps, you can slow the audio down by encoding it like this:

And just remux it with the video in mkvtoolnix, de-selecting the original audio, and setting the video frame rate to 24fps.

I’m not well versed in ffmpeg, does this operation keep the correct audio pitch? I assume you’re posting this for the benefit of those who want to keep their file BD-compliant.

Would be people be interested in a speed/pitch corrected edition of A Grand Day Out? Also, if I were to include speed corrections of both other shorts as bonuses with this preservation, would people prefer I use the cropped Blu-ray of A Close Shave to keep it HD, or just use a DVD video source to keep the proper aspect ratio?