Haha we have a bit of a joke on this forum’s Discord that there seems to be an unusual amount of Aussies active on the server. Nice to find another one here.

CaptainFaraday, you wouldn’t happen to live in Australia would you? 😮

Probably belongs in the Best Edit Ideas thread, as this may actually benefit the setting.

Hahahaha I have to admit RogueLeader, I seriously thought your idea was to make Kijimi that kind of revolting. 😆

The last thing I want is to get into another fight in this thread, I’ve been consciously making an effort to improve my attitude since then. 😃

Can I point out the irony in how making jokes about people cluttering threads with ideas clutters threads just as much as suggesting legitimate ideas does, regardless of whether or not they’re being posted in the right place.

Okay let’s not get mean.

It would be cool to see that transition happen, too. To see clones serving alongside recruits.

I’ve been wanting to see hopeless stormtrooper recruits fighting alongside the bred for war clones for ages now. 😆 I really hope that’s something we’ll get on screen.

It’s a great idea to convey that the helmet is saved, but with this new line most of Kylo’s anger is lost from the original.

The kids that were roughly the age of Boba (and played by that actor) in Attack of the Clones wouldn’t be fully aged up to the same age as the first batch of Clones from that film by the end, or would be barely of age. The clones age roughly two years per year (excepting Boba), so if that batch were 10 when the Clone Wars started, they would maybe be 20 by the end (relatively).

We also see a batch that is relatively the same age as Boba (half his age objectively) in a Clone Wars arc that would not have been that long before the end of the war (five years is an incredibly short period of time anyway).

I also don’t think the Kaminoans knew the Clone Wars were ending when they did, and as a business would likely have liked to continue supplying the military force (as we see with their senator in The Clone Wars), so it makes sense that there would be more young clones.

All good points. Thanks for clearing that up, I couldn’t be bothered doing the maths myself! 😃

She’s the character I’m actually the most interested in. So she is a clone of Jango, but with two XX chromosomes instead of an XY. It’s a really cool idea I had never even considered before. Her perspective and place in the galaxy will be fun to explore.

+1 RogueLeader, my thoughts exactly.
As I had already written on the OT Discord yesterday, Omega may end up being a highlight of the show for me. Dare I even say a favourite character? I’m still of the opinion that the rest of the Bad Batch squad aren’t all that interesting enough to have a whole show about, so bringing in a new team member is certainly welcome in my book. I’m definitely not getting that ‘annoying kid’ vibe from her since seriously guys, she has like 2 lines in the trailer and you’re already making that judgement? 😉 But overall I agree that exploring her perspective on the aftermath of the war and being a part of a soon to be redundant army will be very interesting. I even think the show may start to dig into questions like if Omega is a member of the Bad Batch team now, what does it mean to be one of them? And specifically, how do they stand out from the rest of the clones, aside from the obvious, skin-deep differences? One thing I am wondering is that why would Kamino produce more children at the very end of the war? Did we even see any clone kids in any of the later seasons of TCW? Certainly not in ROTS.

Maybe Rey is so selfish that she only considers the murder of her own parents a ‘horrible thing’ I mean, so hundreds of Jedi died, no big deal, right?

On that note, I know this has been talked to death, but is there any way we could get rid of that moment when Rey’s mum and Palpatine clone reject say goodbye to child Rey look-alike?

Have the only time you see these two be when they die. They shouldn’t give a damn about what happens to Rey. Plus, I don’t like that stupid face the non-Ian McDiarmid dad pulls.

Edit: Joking, but I would like to see this be done.

I will say that it does seem a bit strange that 3PO’s programming prevents him from translating the dagger directly, but he himself admits that he knows where the wayfinder is located… like what’s stopping him from just telling the trio, “Hey, Endor is a nice place this time of year.” wink wink

Yeah I didn’t have much of an issue with 3PO’s programming conveniently restricting him for the sake of the plot, since we’ve seen that before in ROTJ, the thing that really, really bugs me is that they literally give him a line in the film to explain the reason his programming prohibits it, by having him say something like “I believe the rule was passed in the senate of the old republic” but for some reason they seem to consciously make an effort to draw attention away from the explanation by having the giant snake creep up and hiss loudly. I wish there was some way to better incorporate this reasoning into the film in a way audiences can actually pick up on it.

(Maybe it will help to remove the weirdness of the Force theme hitting its peak as Pryde gets flown through a window, maybe replace with Rey’s theme?)

I’m no audio genius… (5.1? What’s that??? 😉) But I would say I can rebuild sound mixes from scratch relatively well, so long as there’s no dialogue overlapping. 😄 Maybe I could give that a shot? I did something similar to it for Hal’s ROTS edit only a few months ago.

Lobot’s head in a jar in a trunk

this comes at a good time. I’m gonna send you a PM!

When Zorri Bliss is revealed to be part of the enormous civilian fleet at the end of TROS, it is no longer Babu Frik that pops up in her fighter. Since Kijimi isn’t destroyed, the spot goes to Nambi Ghima.

General Pryde then hears this over the comms and says to himself, “That’s an excellent name”

Maybe with one or two shots re-arranged and some extra lasers added, it could sell the effect: 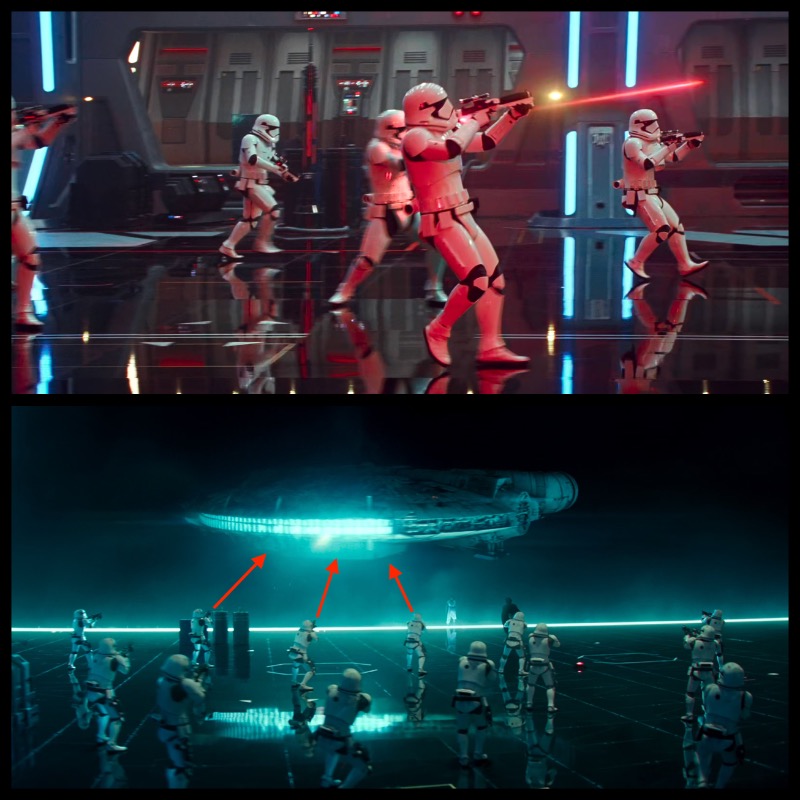 I sometimes have to remind myself that the Yavin base in ANH got 8 consecutive establishing shots.

Oh damn… You’re right! It never really clicked with me. 😄

Since I’m working in the Maz’s Castle section, here’s a hopefully final version of the insert shot of the Meson Martinet, now with cleaned up matte, gate weave, and the inclusion of a pirate:

Woah, that is absolutely fantastic NeverarGreat! I love the addition of the pirate waiting around. This little cutaway is a genius solution to help Rey’s motivations for running away be just that little bit clearer. 😉 Also very nice to see such a unique ship and character brought into the spotlight after being somewhat swept under the rug in the film.

Very excited about the Falcon tracking beacon as well! 😄

Also, I’m a little late to this thread, so I’m still catching up, but I happened upon this clip from a while ago:

Here’s a rough version of the new sequence I’m considering for the Hosnian Destruction. It’s closer to Restructured, but unlike that scene there’s actually too many shots to fit into the music duration.

I love the way you were able to re-order certain moments a little differently to Restructured, as my biggest issue with that edit was Chewie’s long delay before shooting Kylo.
However I did notice in this clip that you still retained the shot of Leia’s reaction to Han’s death in the theatrical as her reaction to the base firing. The problem I see with doing this is that in the context this edit, the entire Resistance base is aware that the Republic is being destroyed, yet in the shot of Leia, people are just chilling around and one guy just strolls past. Obviously it would make sense in the original film, as only Leia knows of Han’s death, but as it stands in that clip, it just sticks out to me as a mistake.

Sorry for my rambling, I hope you get my point! 😉

I wouldn’t consider it the very best performance, but he’s certainly up there as one of my favourites.

That explanation doesn’t really fly for me, since it takes a spectacular amount of obtuseness for Vader to not at least suspect that the Force-sensitive teenager who blew up the Death Star named Skywalker is his kid. Acting dumb just makes him look like a buffoon in front of the Emperor. Besides, since Vader is openly calling this kid ‘Skywalker’ from the beginning in an obsessive hunt, there’s no reason that the Emperor wouldn’t know his reasons for searching. Hell, I’m sure the paperwork on the probe droid operation would have been labeled ‘The Search for Skywalker - Probable Child of the Famous Jedi of the Same Name’.

Also, the idea that Vader would have some ill-will towards Palpatine for calling Padme’s death a few hours early seems like a stretch. It’s technically true that Anakin and his anger killed her, even if the details aren’t exactly as it seemed in ROTS. The fact is that Padme eventually died at Anakin’s hand and a child exists, something that isn’t impossible so Vader’s astonishment, feigned or not, is silly.

Well said NeverarGreat, you worded the issue and highlighted the cause for confusion a lot better than I did. 😃

Not a fan of the SEs or this change, but the usual reason given in favor of it is that Vader’s hiding information from Palpatine. He doesn’t want Palpatine to know that he already knows Luke is his son.

It raises a few more questions, though. Like, why would Palpatine care if Vader already heard about it? Or, why is the movie bringing this up when it’s never really relevant again? Plus, I don’t think that’s actually what Lucas had in mind when making the change.

But that explanation isn’t so horrible, and while I much prefer the original, it’s good enough for me.

My biggest issue with adjusted the dialogue is that to first time viewers watching the SE edition, Vader’s line of “How is that possible?” is going to stick out immediately as an error or at very least be confusing after what the film sets up until that point. The explanation that many people give the change probably won’t be clear straight away. Not that it’s even very clear if you spend ages thinking about it. 😉

During the Darth Vader’s suit scene in the climax of ROTS:

Vader: So have you, far more beautiful I mean, for an emperor I mean.