I have one question.

Why is Doctor Kynes a woman? I consider it a fundamental change to a character.

I don’t see how Kynes’ gender is relevant one way or the other. It really doesn’t matter.

You’re, like, the first person I’ve seen anywhere that didn’t think it was excellent. I’m surprised. I thought it was the most successful “decades too late” comedy sequel I’ve ever seen.

Not sure if this was already addressed, but why do you want to remove the Order 66 montage?

It actually works really well, IMO. It was an inspired idea on Dom’s part, it helps focus the emotions at a key moment in the film.

Same thing happened to a thread of mine. Not your fault Chase, this is on the individual who decided to change tons of thread titles without checking with or getting permission from the creators first.

Mod Edit: the ‘individual’ would be me (that reads so much nicer than your insults in the PM thread - thank you, Ash 👍).

For general info… the reasons why the 6800 threads in the ‘Fan Project’ sections were amended - as part of the recent site improvements made over the past four months - can be found here:-

with more info in a discussion thread created by Dom, here…

and some discussion here too - Reorganising Star Wars Fanedits

In short, many of the 6800 threads were amended to give the status of a project (an ‘idea’, ‘WIP’, ‘help wanted’, ‘released’, ‘unfinished project’, or ‘on hiatus’ etc) - or to give an accurate indication of what a thread is more about - to be an improvement / benefit to the community here.

Lightsabers never cast light onto anything else at any other point the OT, there’s no reason to think it should in this scene either.

Plus it looks…really bad. Sorry.

Some of the Empire pictures that have been coming out look a lot more atmospheric and pseudo-medieval, not nearly as “clean” as the earlier photos. 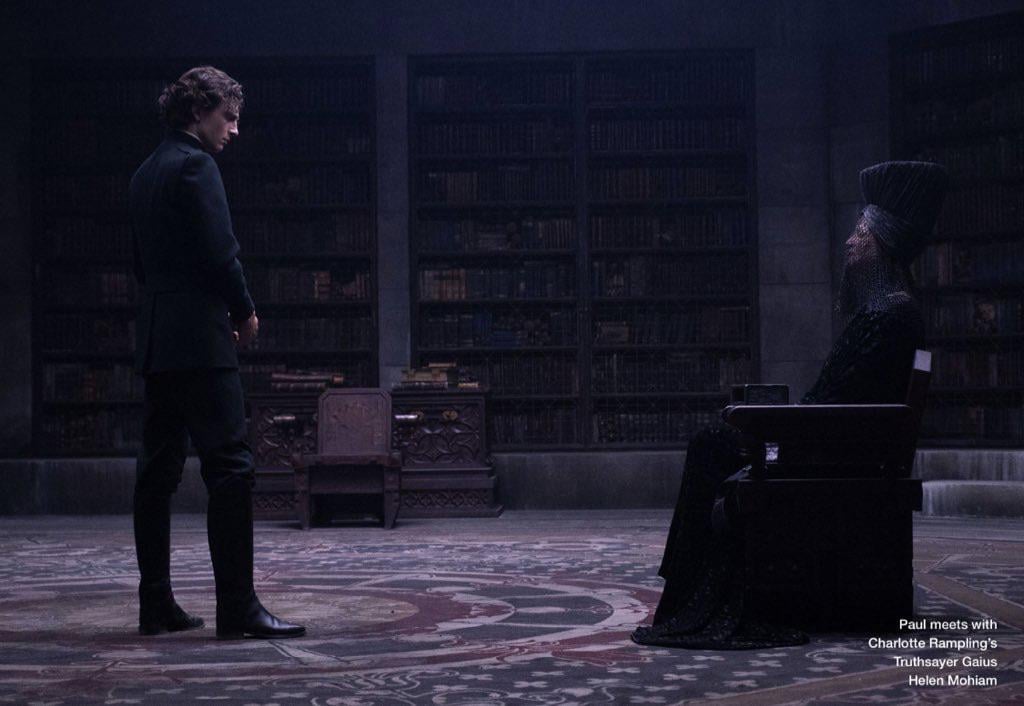 I’m attributing a lot of the “too clean” to the fact that most of these stills are set photos or publicity photos and not actual frames from the film itself.

Nope. I see one Weirding Module and I walk out of the theatre.

The images I’ve been seeing mostly nail the look I always had in my head while reading the book, so as long as they don’t do any of the heart-plug, voice-gun Lynch bullshit, I think we’re good.

Oh wow, I had no idea there was a second edit button. Thanks!

Nevermind, I was unaware this had been implemented. Apologies!

I’ve watched a good chunk of it, and I think it’s very well done, though there are a couple things here and there I would have done differently (you cut out Al’s identity crisis entirely!)

But I actually have one big and two less-big problems with your first episode.

The big problem is the manga scan inserts. They’re immensely distracting and they aren’t necessary to use in any way. That scene can easily be edited using only FMA03 and FMA:B footage (or just pick one or the other) - using manga scans takes me out of it and doesn’t make me want to continue watching for fear of that being a recurring element in your edit. Thankfully, this is (so far) the only place you use this, but that makes it even a bigger head-scratching moment that you do it at all.

The first of the two smaller problems are the opening of the first episode - it shouldn’t be the “Alchemy…” narration, it should be a very abbreviated version of the immediate aftermath of their failed transmutation. Both 2003 and the manga do this (though 2003’s is too long) and it’s easily the best “hook” for the series before it shifts to the Lior story. I would just use what Brotherhood uses as a flashback at around the 17m15s mark of Brotherhood’s first episode (the Ice Alchemist one), though I haven’t gotten to your flashback episode yet so I dunno which version you went with for the actual flashback.

The second smaller problem is Cornello at the very end - he suddenly has his “gun arm” from Brotherhood even though you used the 2003 version of his downfall. This really needs to be rectified somehow, it’s the only glaring continuity error I’ve noticed so far.

After that, episodes 2-8 are pretty close to perfect, though I think there might be a minor continuity issue with Ed’s age being stated in the train episode (since 2003 places that before the alchemy test so he’s younger than he should be), and I don’t know what I think about the little 2003 insert of Winry asking to take apart Ed’s watch since I don’t think the manga or Brotherhood ever imply that the watch has “alchemy enhancers” the way 2003 does. And again, I don’t like cutting Al’s identity crisis since that’s in the manga and both anime adaptations - whether I love the story beat or not (I don’t all that much), I don’t like cutting it, especially when it ends up making the episode only 13 minutes long.

Looking forward to checking out episodes 9-14, and overall excellent work! I really love how you dealt with Hughes and the boys’ meeting by repurposing footage from Brotherhood’s first episode, that was a very smart choice and works wonderfully (and you also did an excellent job of editing the train episode to serve as Ed and Al’s first meeting with him and as his and Mustang’s main introduction to the audience).

Thanks so much for letting me know about your project!

I mean, that’s fine, it’s just that there’s also a thread specifically for TROS music replacement ideas and also a general TROS edit ideas thread, and Hal has said repeatedly that he’s not changing it yet people keep pestering him in this thread about it. If he’s made up his mind, about it, then take it to one of the other threads where someone else might like the idea and use it in their edit.

Which isn’t exclusive to the music thing, people keep pestering him about every change that they want that he’s said no to, which makes this thread a slog to try and keep up with.

I dunno, I’m probably just being a curmudgeon. I’ll bow out of this thread once again until the edit is finished, I’m clearly just going to keep getting annoyed because this isn’t the first time I or someone else has said these things and we’re ignored every time.

Can we maybe move discussion of the ending music out of this thread since Hal has said eighty billion times at this point that it’s staying as it currently is in the edit?

Yeah, the idea that it’s impossible to restore the original versions is patently absurd. Movies where the negative no longer exists in any form have been restored to excellent levels of quality. There’s plenty of source material to use.

Oh wow, that’s awesome! I’ll definitely give it a look!

I’d still (someday, hopefully) like to do a true “manga cut,” but I like the idea of using some of the 2003-original material that can still work in “Brotherhood.”

FYI, I made a synced AC3 5.1 track from ZigZig’s bit-perfect laserdisc capture, that will work with v1.15 at least; that one still has sync issues with the audio track, and it’s AAC, which is a format I’m not a fan of within video containers.

I sadly wasn’t able to retain the Dolby EX/6.1 configuration, but it’s still the laserdisc 5.1 mix, and it’s synchronized to Bobson’s v1.15 release!

Anyone who wants it, shoot me a PM. Thanks to ZigZig for giving me permission to share this.

(For those who don’t want to bother with that, I believe you can just apply a delay in mkvtoolnix to the audio; someone said -500 ms over at a different forum, but I’m not positive if that’s correct, YMMV.)

I’m pretty resigned to agree for the primary release of Hal’s edit, but it would be awesome to have an alternate version of those shots for anyone who wants to cut them into their own personal version of it.

Hell yeah! If he can do it and is willing/able to (I know he’s a busy guy) I’d be all over that, for my own personal copy at least!

I have a little nitpick with the force ghost scene in the final battle in the movie, am I the only one who thinks it would make more sense to have Sebastian Shaw, the original actor who played Anakin in the ending of ROTJ, instead of Hayden Christensen? We have an old Obi Wan, and old Luke, but Anakin who is the grandfather of Luke is still young, it’s just a little nitpick in my part, it doesn’t work that much for me, other than that, the edit and concept of that scene is still fantastic, and I’m a big fan of the work that has been done by the fan edit community, it’s fantastic!

Between Hayden being in the RotJ scene (canonically) and only having the one weird smile for Shaw… This seems like an unrealistically difficult nitpick.

It’s also not Shaw’s voice in the scene, but Christensen’s.

I’d actually love to see a version of it with Shaw if it could be pulled off, but I agree that it’s likely unrealistic and can live with Hayden (I believe he’s slightly aged up anyway, isn’t he?)

I still would like to see jonh or someone else take a stab at fixing Hayden in ROTJ to be similarly slightly aged and to look more like he belongs (with ROTS style robes and probably different Hayden takes replacing the awkward ones George used). I’m not inherently against the idea of an alternate Hayden version of the ROTJ ghosts, I just think the official version looks like dogshit (much like the official McDiarmid Emperor in ESB, which Adywan thankfully fixed).

I don’t suppose anyone has a chapter list/file that will work with this? The chapters from Adywan’s old theatrical DVD might work but I don’t have it, unfortunately. Official DVD/BR ones will obviously be off starting at the podrace.

Yeah guys, unless the edit’s specific goal is to adhere strictly to existing canon…

Who cares about “canon” when doing fan edits.

…why bother making a fan edit if you aren’t changing stuff, canon be damned?

ANH: Revisited wasn’t released in 720p, that’s still only in standard def (720x576 since Ady worked from PAL sources). Unless you’re talking about a 720p upscale, in which case you’d be better off going back to the PAL DVD9 and upscaling from that (adjusting the framerate from 25fps to 23.976fps and taking the 5.1 audio from the NTSC DVD9) as opposed to upscaling a 720p upscale a second time.

Maybe read the thread and find out? 10 pages is nothing.